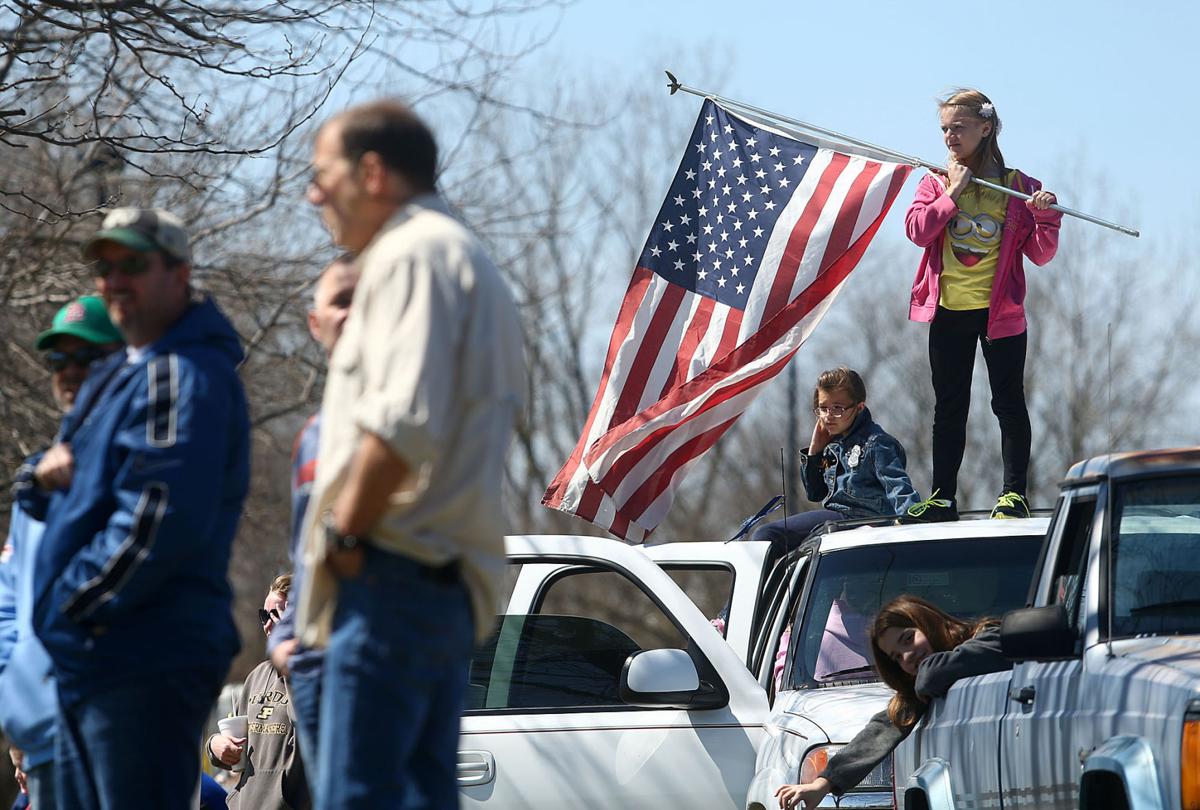 Angel Mackey, 11, waves a flag as she stands on top of a truck at the Howard County Sheriff Department on Tuesday, March 29, 2016. The funeral procession went past the Sheriff Department and the hearse stopped in front of Deputy Carl Koontz's patrol car as his final 10-42 call was broadcasted. Kelly Lafferty Gerber | Kokomo Tribune 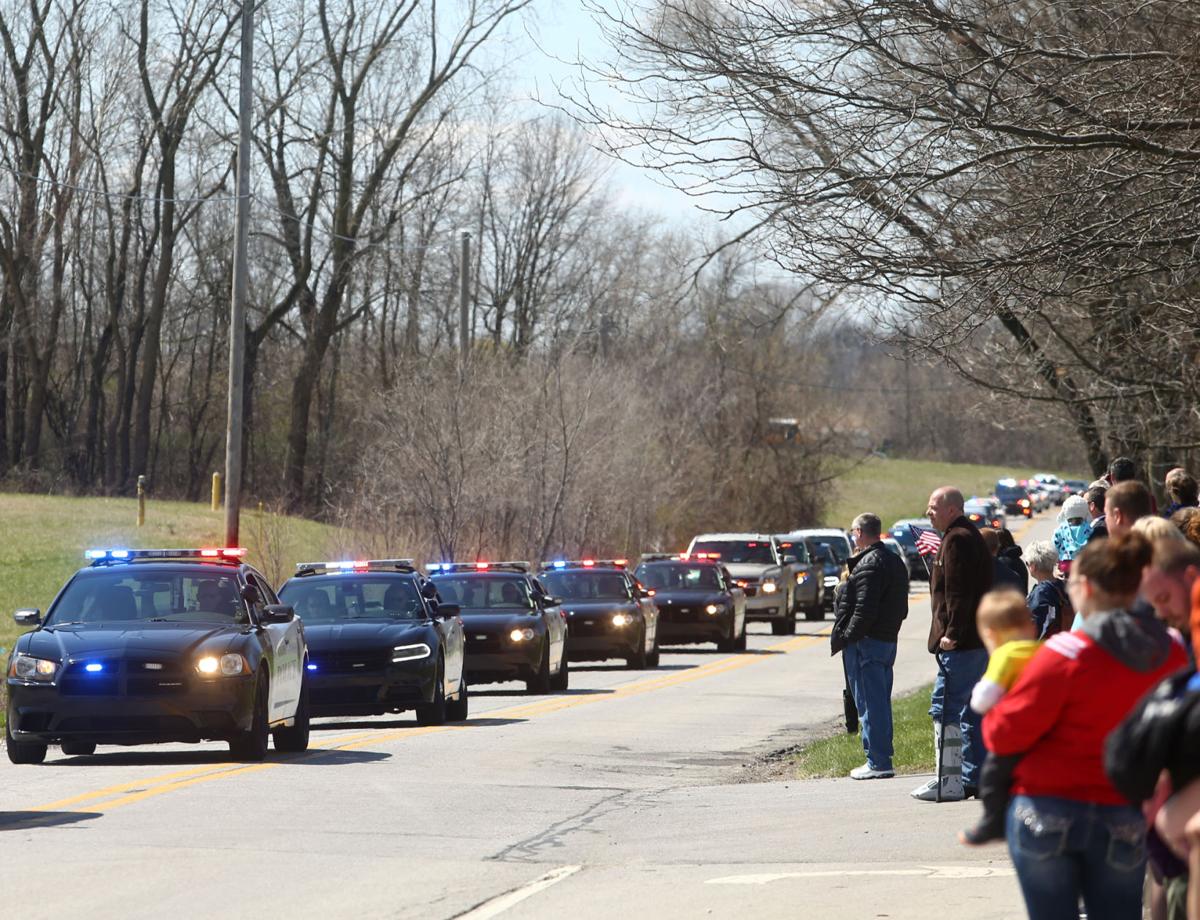 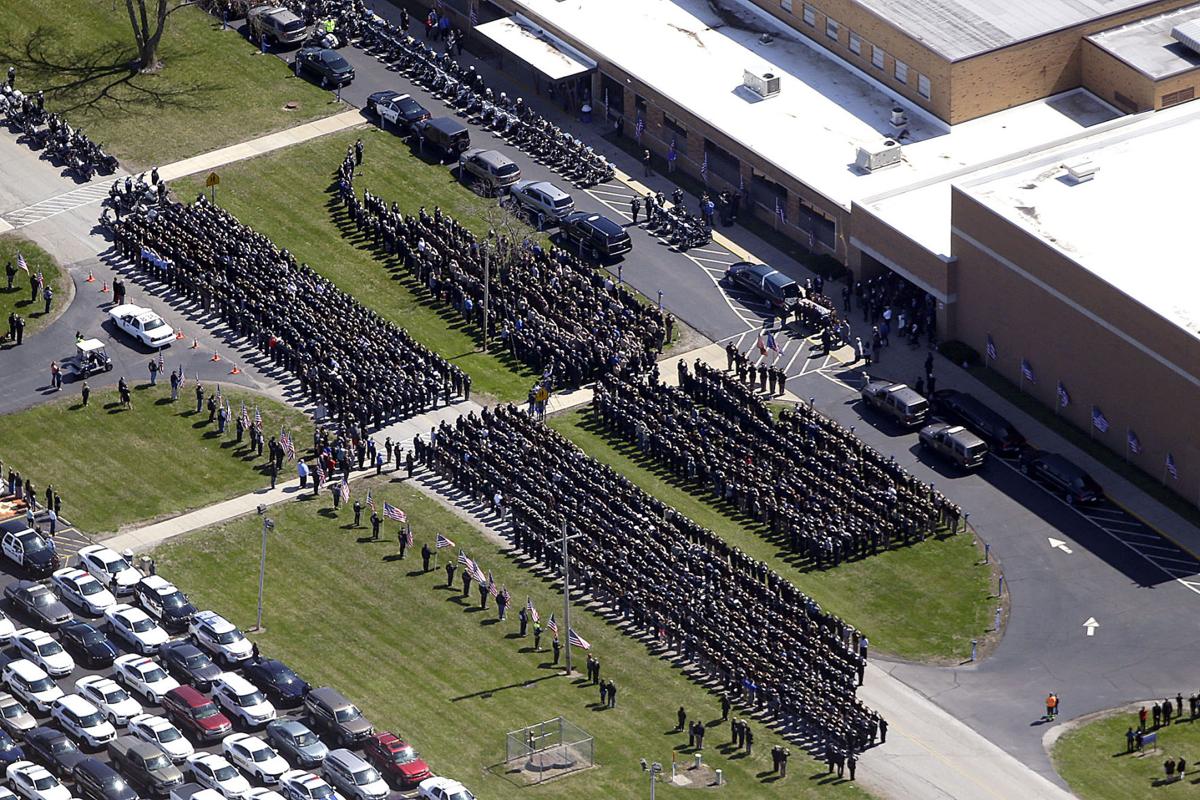 Officers stand at attention as the casket containing Howard County Deputy Carl Koontz is loaded into the hearse at Northwestern High School for the procession to the cemetery in Kokomo, Ind., Tuesday, March 29, 2016. Koontz was killed in the line of duty while serving a warrant on March 20 in Russiaville. (AP Photo/Michael Conroy) 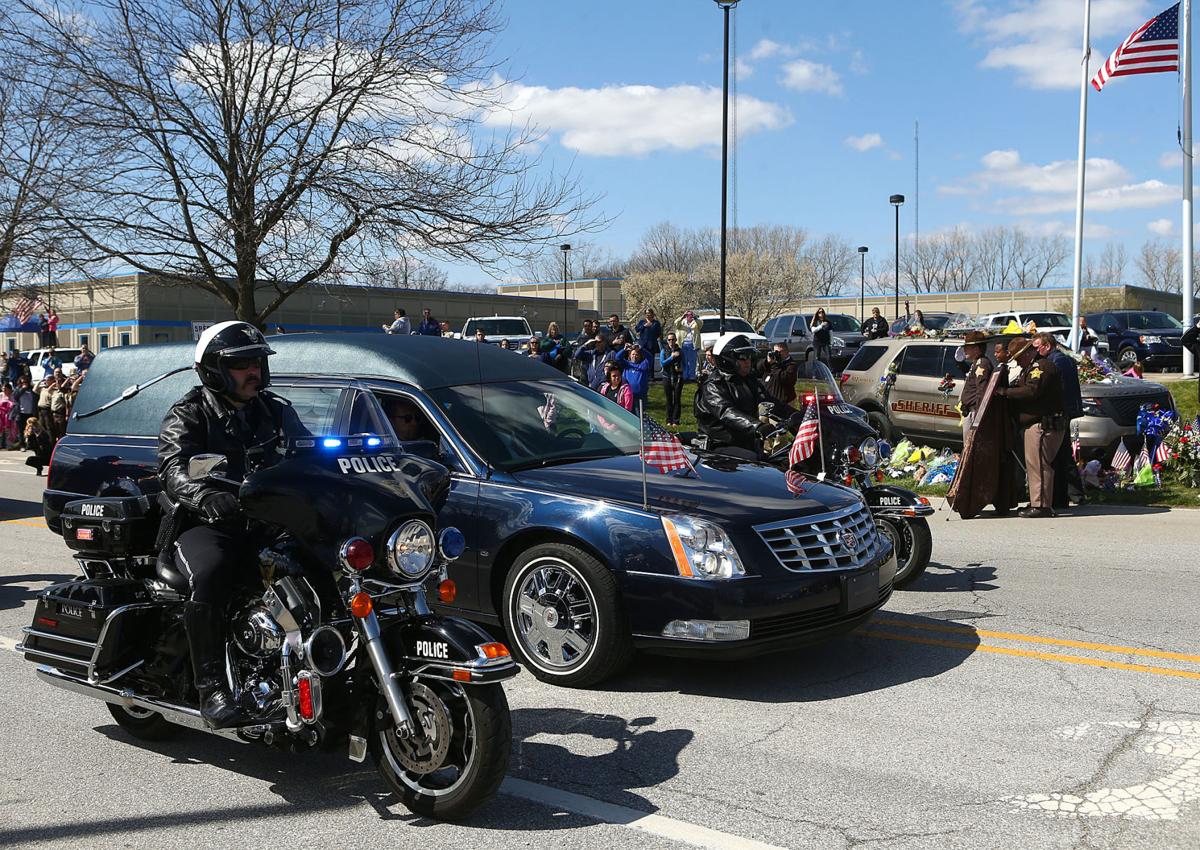 Angel Mackey, 11, waves a flag as she stands on top of a truck at the Howard County Sheriff Department on Tuesday, March 29, 2016. The funeral procession went past the Sheriff Department and the hearse stopped in front of Deputy Carl Koontz's patrol car as his final 10-42 call was broadcasted. Kelly Lafferty Gerber | Kokomo Tribune

Officers stand at attention as the casket containing Howard County Deputy Carl Koontz is loaded into the hearse at Northwestern High School for the procession to the cemetery in Kokomo, Ind., Tuesday, March 29, 2016. Koontz was killed in the line of duty while serving a warrant on March 20 in Russiaville. (AP Photo/Michael Conroy)

The short ceremony – attended by roughly 3,000 people, mostly officers from across Indiana – was bookended by the quiet arrival of Koontz’s flag-draped casket, led by a riderless horse, and his family’s private, mournful goodbyes to a son, husband and father.

In between, though, was a public ceremony that allowed attendees to pay their final respects to Koontz, who, since his death on March 20, has become a hero to many, especially the officers who stood shoulder to shoulder and consoled each other through the first on-duty death most have experienced.

Koontz, 26, died last Sunday morning after a shootout at a Russiaville trailer park with 25-year-old Evan Dorsey, who was wanted by police for failure to appear on a charge of possession of a syringe. During the gunfire exchange, Koontz sustained a single gunshot wound to his pelvis.

Later the same morning, Koontz died from the injury at I.U. Health Methodist Hospital in Indianapolis. Also shot during the incident was Sgt. Jordan Buckley, 35, who suffered an upper thigh wound but is expected to make a full recovery.

Buckley has since credited Koontz’s actions for saving his life on that fateful night.

With those heroics in mind, officers, friends and complete strangers looked on as Koontz’s wife, Kassandra Koontz, was honored during a flag presentation ceremony, and, with her head bowed, accepted the condolences of Howard County Sheriff Steve Rogers.

Koontz later followed a group of officers as they carried her husband's casket to his official burial site within the cemetery. It was there that the family gathered for a final private moment.

“His family is very strong. Kassie was able to stand up this morning and speak to the people at the funeral, which I think took extraordinary strength,” said Rogers following the services. “And Carl was an extraordinary person. We are trying to work hard to recruit the right people in law enforcement, and Carl was one of those people.

“People liked him that he came in contact with. He was the type that went out of his way to help someone, and he will really be missed. He set a standard for us, and we need to recruit more people like Carl Koontz.”

Other honors for Deputy Koontz included a three-volley gun salute, the playing of Taps and an invocation by Chaplain John Murdoch. Minister Steve Cole, who spoke at Koontz's funeral earlier in the day, also led prayers during the ceremony.

Most poignant, though, was the placement of thousands of white carnations, each dotted with red to represent Koontz’s sacrifice, in baskets placed on either side of the casket.

With a steady stream of officers, most adorned in various black, blue or brown uniforms, softly placing their carnations onto the two growing stacks of flowers - others presented their carnations directly to Koontz’s family - the impact of his death was readily apparent.

It also was clear that impact had stretched statewide, as noted by Sue McConochie, who traveled from Indianapolis to Albright Cemetery to honor Koontz, although she has no familial connection to law enforcement or a personal connection to the Koontz family.

“I think we need to stand in support of goodness and bravery, and support all law enforcement officers throughout the country,” she said. “And we need to stand against evil. There is too much evil out there; we need to come together for goodness.

“I was impacted because he died so young,” she continued later. “And I am impacted by any story where a law enforcement officer is killed in the line of duty. They put all of their lives, their families and everything they have on the line to keep us safe.”

Joining those lining the streets outside the cemetery and honoring Koontz’ memory was Norman York, past commander of America Legion Post 317 in Greentown. It’s imperative, he said, to honor the memory of a man that sacrificed everything for those in attendance.

“The first thing that came to mind was just the senselessness of it and the loss of a life, and a father and a good citizen of the community. That’s really it in a nutshell,” he said, before continuing on to speak about the community-wide outpouring of support.

“It’s been inspirational, but it also supports the fact the citizenry does care and that’s what’s important. These officers serve every day for us as the veterans do and the military does, and it is very, very important that it’s not forgotten.”

For Rogers, there isn’t much about the past week-and-a-half that will be forgotten, as it has provided his department with both an abundance of heartbreak and overwhelming encouragement.

“And I feel like I need to thank this entire community in some way, and I’ll try to do that. It is obvious the people we work for do appreciate what we do,” he added later. “The people we work for expect us to win every battle, and we will because we are standing here with every police agency you can think of in Indiana and across the county.”

When Howard County Sgt. Jordan Buckley talks about the morning of March 20, he is sure to make one detail particularly clear - Deputy Carl Koo…