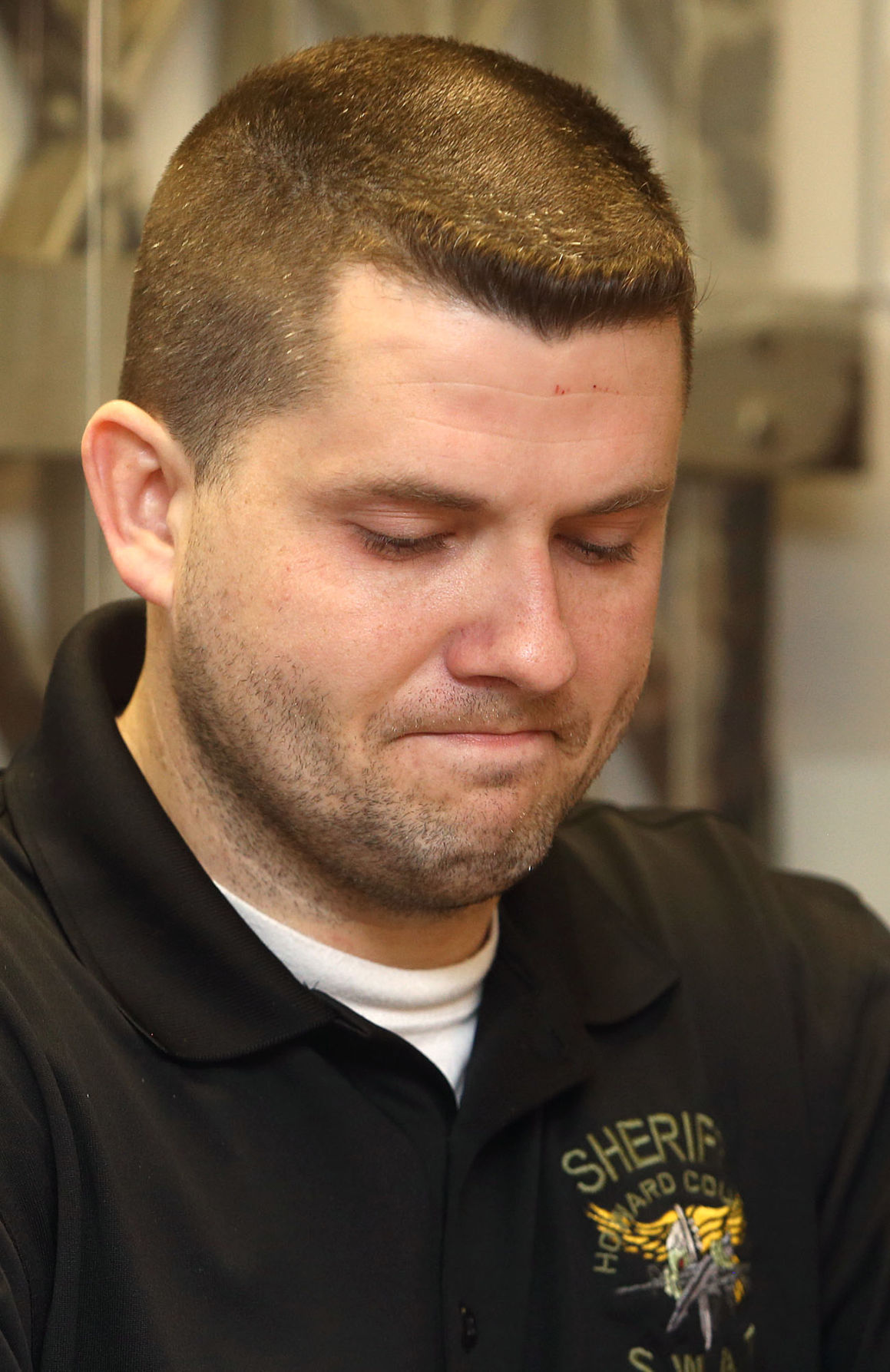 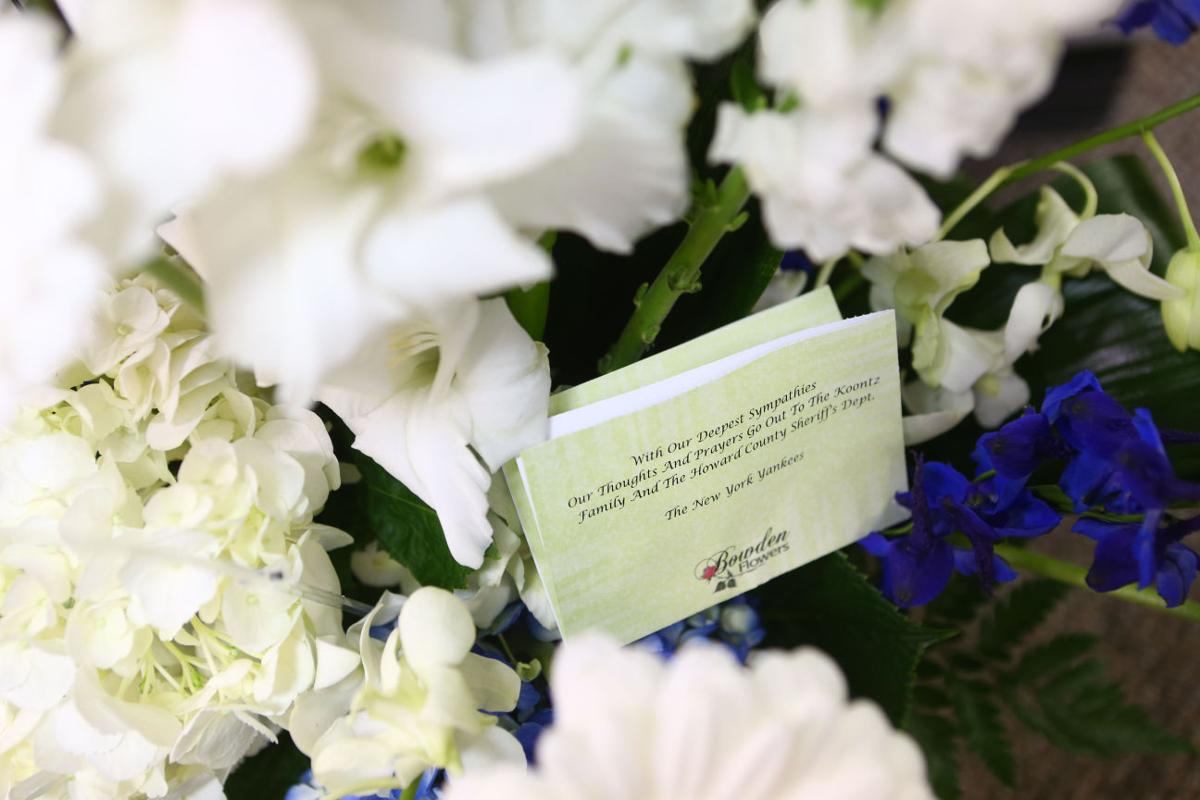 Only a day after being released from an Indianapolis hospital, Howard County Sheriff's Sgt. Jordan Buckley spoke publicly Tuesday for the first time since Sunday’s shooting in Russiaville, an incident that claimed the life of his friend and partner, Deputy Carl Koontz.

During a press conference at the Howard County Sheriff’s Department, Buckley joined Sheriff Steve Rogers and Cpl. Justin Markley, who read a statement from Koontz’s family, to speak about that fateful morning and its impact on all involved.

While reading a prepared statement, Buckley thanked the local community and those throughout the country for supporting both himself and local law enforcement.

After also giving thanks to his “law enforcement family,” Buckley spoke through tears and numerous pauses about the man he credits with helping to save his life. During Sunday’s shooting, he received a gunshot wound to the upper thigh.

Buckley, who was recently promoted to sergeant, is expected to make a full recovery.

“Although I am beyond thankful to be standing here today, let’s not forget who this is really about. This is about Deputy Carl Koontz,” he said. “Yesterday after being released from the hospital, I walked into my house to my wife and kids. Carl will not be doing that.

“Deputy Koontz sacrificed his life beside me, which is the reason I stand here today. I will be eternally grateful for his actions and every day I put on my uniform, I will wear it with pride for both of us.”

Prior to Buckley’s comments, Markley read a short statement from Koontz’s family, who were initially expected to appear at the press conference, but chose Tuesday afternoon to prepare the statement instead.

“Today, we want to say thank you, thank you to everyone who has prayed, sent messages, flowers and shown their love to the Koontz family,” read Markley. “He will always be a hero to all of us. His legacy will live forever and he will always be remembered as Howard County 34-76.”

While no new details about the incident investigation were released, Rogers provided the public with a clearer picture of the events leading up to Sunday's violent encounter.

After learning during his shift Saturday that Evan Dorsey, wanted on a warrant, was likely hiding out at 380 Chandler St. in Russiaville, Rogers said Koontz obtained a search warrant for the address. The sheriff added that Koontz voluntarily worked past his normal shift to “further the investigation.”

“He also wanted to be there to assist the other officers in the service of that warrant. That is who Deputy Koontz was. That is who these people are,” said Rogers, referencing other deputies standing in the room.

Rogers noted the sheriff’s department has approximately 2,600 warrants on file at the moment, serving roughly 20 per day. Rogers has also said serving a warrant at late-night hours is not an uncommon practice. The shooting took place at roughly 12:30 a.m. Sunday.

“We know that at some point in time you are going to walk into that situation where it’s a trap or it’s a situation where something could go wrong,” said Rogers, noting an internal investigation is common practice after such incidents. “We train for that, we try to prepare for that, but if you know what American law enforcement is all about, that is what happens on a daily basis across this country.”

While explaining that a search warrant was obtained because Dorsey, wanted for failure to appear on a charge of possession of a syringe, was not a listed resident at the Russiaville address, Rogers said the officers had no indication he was a dangerous suspect.

In addition, if officers had known Dorsey was in the residence, a different approach would have been taken, said Rogers.

“If we knew he was in there, we wouldn’t need the search warrant. We would go kick the door in without the search warrant,” he said. “The arrest warrant actually gives us the power to do that. But based upon the articulable evidence in the search warrant, that gave us the right to approach that residence and if necessary go into the residence to search for [Dorsey].”

An Indiana State Police investigation is ongoing and more details are expected to be released at a later date. State Police Sgt. John Perrine said investigators are still working to “get a clear picture of what exactly happened, and we will continue to do that.”

Sgt. Jordan Buckley back on patrol after March shootout

Howard County Sheriff's Department Sgt. Jordan Buckley was back on patrol Monday after spending the last seven weeks recuperating from a bulle…

When Howard County Sgt. Jordan Buckley talks about the morning of March 20, he is sure to make one detail particularly clear - Deputy Carl Koo…