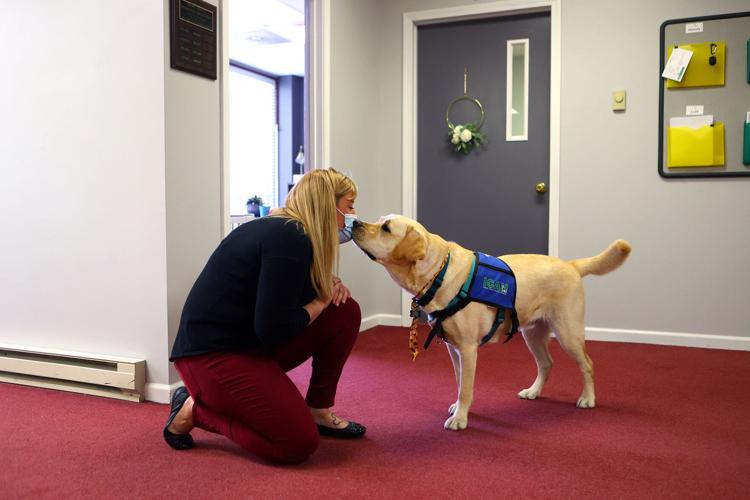 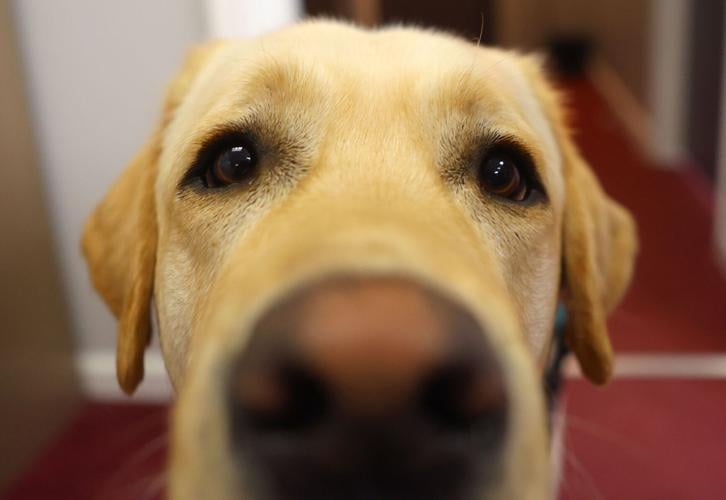 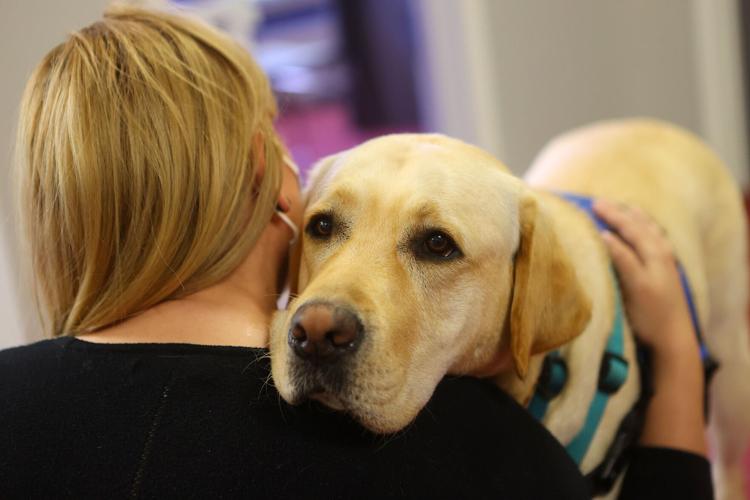 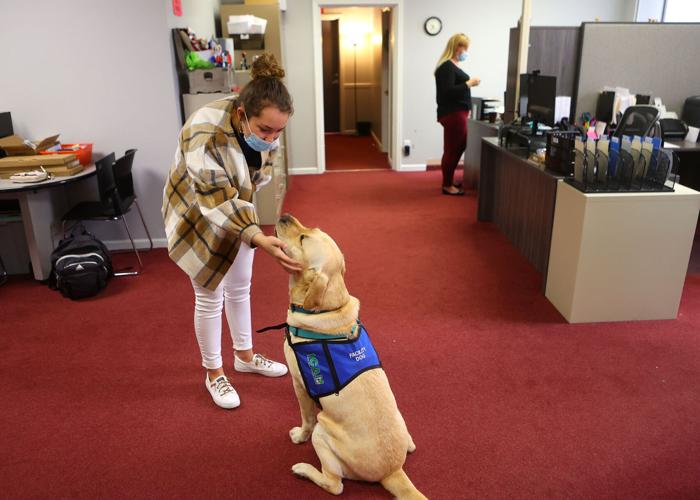 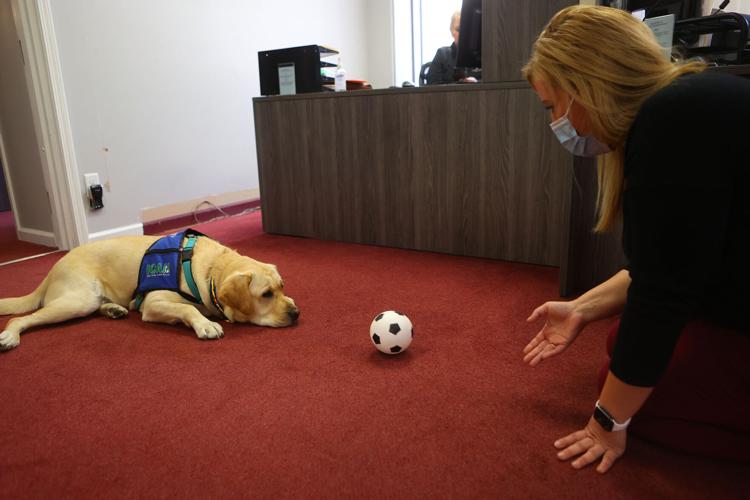 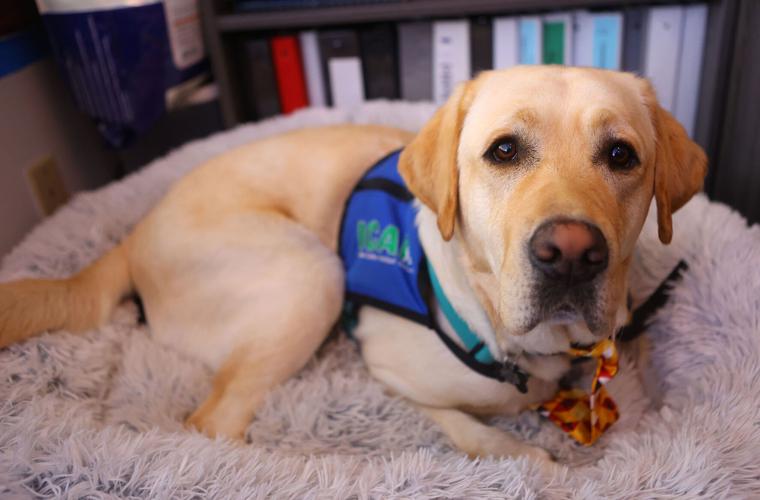 Clad in a yellow tie and blue vest, the Miami County Probation Department’s newest employee doesn’t know how to read or write, how to tell time or even what day of the week it is.

But what he can do is so much more than that.

He can comfort a crying child, show support to someone having a bad day and offer complete friendship without asking for anything in return.

His name’s Foster, an English Labrador, and he’s been working as a facility dog with the department since January.

But really, Chief Probation Officer Mandy Mavrick pointed out, the department’s actually been waiting for him much longer than that.

“Foster is an ICAN dog,” she said. “Indiana Canine Assistant Network. We were on the waiting list for 2 ½ years. … In order to get an ICAN dog, you have to go through a pretty extensive interview process. And then if you pass, they put you on the waiting list. … Then they raise the dogs and match the dog with whom they’re going to place the dog with. So we’ve been waiting on a dog that would essentially fit our needs for the past 2 ½ years, longer than Foster’s been alive. … But I tell people we were just waiting for him.”

ICAN dogs are pretty unique in their own rights too, Mavrick added.

For one, Foster was pretty much raised in a prison for the first two years of his life.

“The dogs are trained usually during the first 18 months or so at one of the Pendleton facilities,” Sandi Clark, director of client success at ICAN, said. “For their advanced training, they get trained at Indiana Women’s Prison (IWP) in Indianapolis.”

ICAN dogs such as Foster — named after Carol Foster, ICAN program coordinator at the IWP — are also trained and raised by inmate handlers who have to follow stringent guidelines to remain in the program.

That’s one of the main reasons why the Miami County Probation Department decided to go through that program to get a dog in the first place, Mavrick pointed out.

“You can get dogs trained through other places obviously, but we wanted to wait to partner with the Indiana Department of Correction,” Mavrick said. “Since he was raised in the IDOC, I think the recidivism rate of those handlers is around 16%. So for us, it was like working hand-in-hand because we deal with those offenders coming out as well. So we just thought it was a neat program.

“Everything we’re doing is to try to help these offenders be successful,” she added, “and we’ll do everything we can to help them do that.”

Foster has already left his mark in just four short months with the probation department too, whether it’s through his daily rounds at the Miami County Courthouse across the street or just greeting individuals when they walk through the door.

“His biggest responsibility is just to be nice to people,” Mavrick — who takes Foster home with her every night — said. “He’s very intuitive with emotions. If somebody is upset, he will go and seek that person out. … There was a juvenile that was being detained once, and so she was crying. She didn’t want anything to do with Foster at first, so he just sat by her. Eventually, you saw her talking to him.

“Every morning, I let him in the door, and he greets every single person from desk to desk,” she continued. “He’s non-judgmental. He’s just excited to see you. And that makes you feel good. It makes offenders feel good. It doesn’t matter who you are or what you look like. He doesn’t care. He just loves you.”

The probation department’s clients even seek Foster out now too, and Mavrick said she’s noticed a distinct difference with those clients since Foster’s been around.

“We have found that they talk more when he (Foster) is in the room,” she said. “When they pet him, they start opening up more with their own stories. I’ve heard so many people say, ‘Oh, I have cats,’ or ‘I have dogs,’ and that helps people segue into other things that are maybe not as comfortable to talk about. Foster just knows who needs him at any given moment, and that’s so cool to see.”

And along with lifting up the clients’ spirits, Mavrick noted that Foster has helped the office staff morale as well, an added benefit that she wasn’t expecting.

“When you have a dog there, who wouldn’t want to come to work?” she said smiling. “We all enjoy it too. We’ll get a soccer ball and kick it, or Foster will come over, and I hear people doing that ‘dog talk’ all day long. … When we go to the courthouse twice a day for him to walk around, people over there love him too.”

And as if on cue, Foster walked into Mavrick’s office, a few staff members in tow.

“Who knew a dog would have this much of an impact, but he really has,” Mavrick said, looking at Foster curled up in his dog bed nearby. “It’s hard to explain sometimes what he does, but he really has changed the emotional stress level of this place. It’s hard to determine how much of an impact he’s made because he’s really just done so much already.”