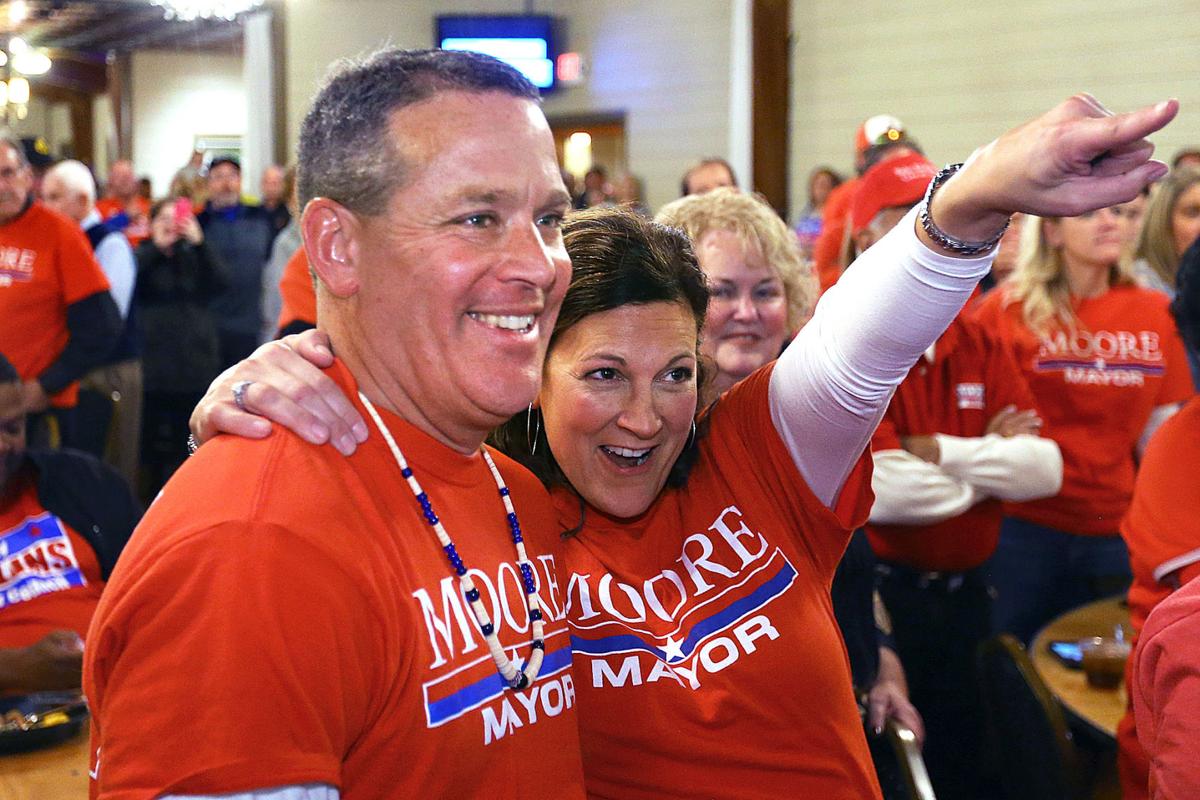 Tyler Moore is shown here with his wife Ann during results on election night at the Elite Banquet Hall where the GOP gathered on Tuesday, Nov. 5, 2019. 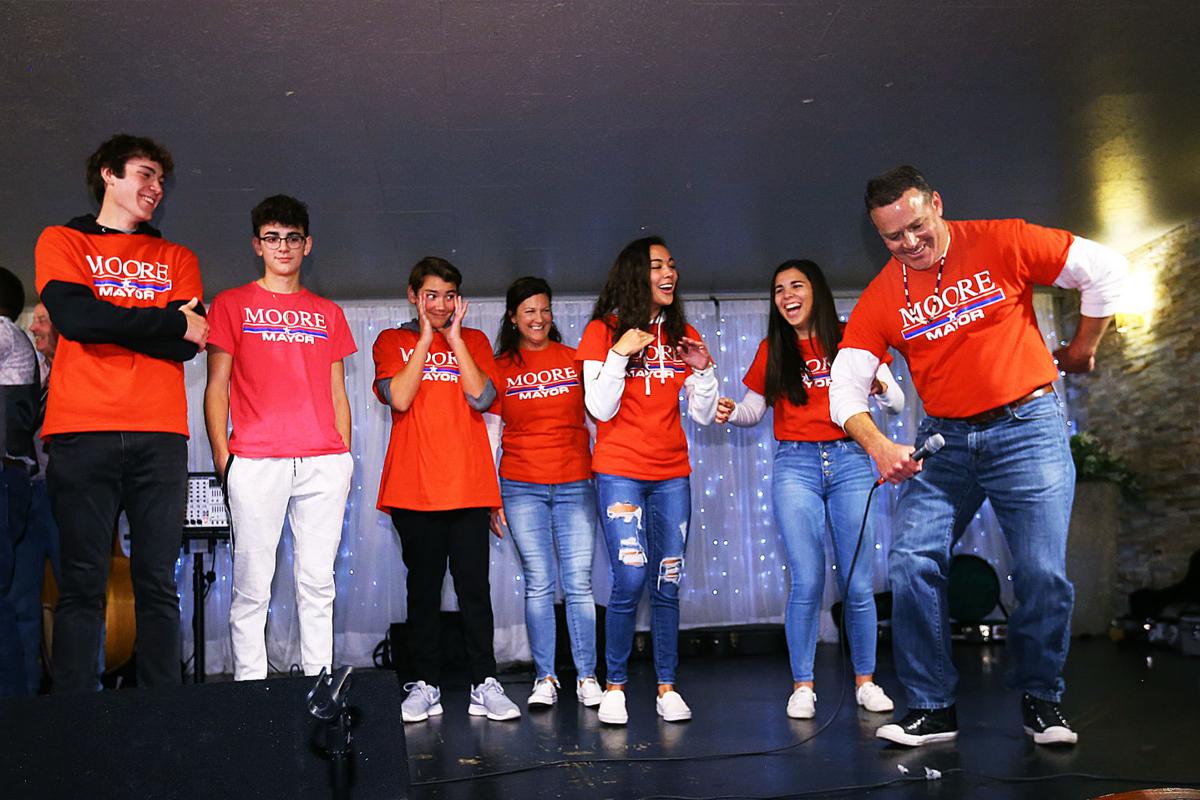 Tyler Moore does a Fortnite jig with his family watching on election night at the Elite Banquet Hall where the Republican GOP gathered on Tuesday, Nov. 5, 2019. 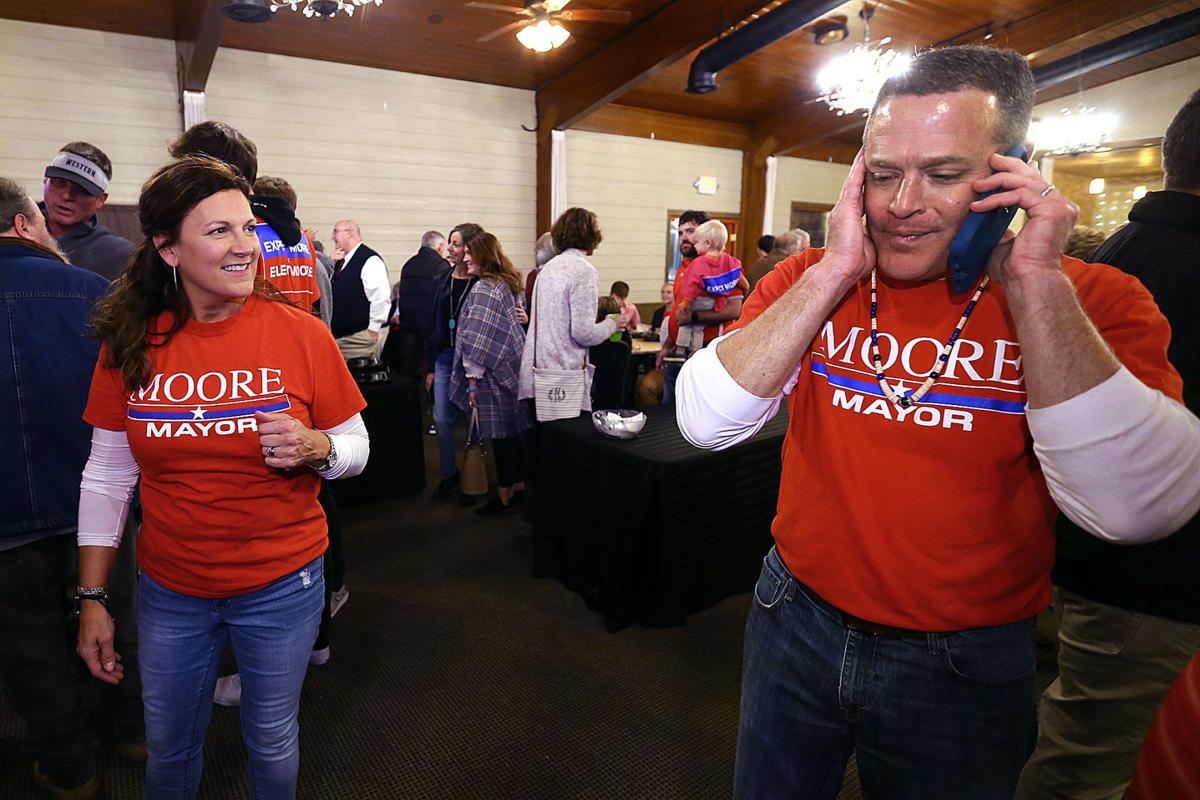 Tyler Moore, with his wife Ann watching, takes a call from a conceding Abbie Smith during election night at the Elite Banquet Hall. Moore will be Kokomo’s mayor come 2020.

Republican Tyler Moore is set to become the new mayor of Kokomo after riding a tidal wave of GOP support Tuesday night that led to Republican candidates winning every seat on the ballot, including what appears to be every Kokomo Common Council position.

Moore took 68% of the vote to beat out Democrat Abbie Smith, ending the fierce and sometimes contentious campaign between the two candidates that launched after the May primary.

Republicans packed into the Elite Banquet & Conference Center on Tuesday night for what soon became a party atmosphere as vote results started coming in and quickly indicated Moore would have a commanding victory over Smith.

After the final results were announced, Moore took to the stage and danced a jig as a bluegrass band jammed out on the stage in front of the venue, which was packed nearly wall-to-wall with GOP supporters.

Moore told the crowd the GOP sweep of Kokomo’s general election ballot showed city residents were ready for a change and some fresh air in city government, which has been dominated by three-term Mayor Greg Goodnight – the longest serving mayor in the city’s history.

Moore said a diverse group of candidates fired up voters to go to the polls, leading to 35% of registered voters casting a ballot.

That led to Moore garnering more votes than any other mayor in the city’s history. Howard County GOP Chairman Jamie Bolser said the record was previously held by the mayor elected in the 1963.

Now, with Republicans holding every elected seat in the city, Moore said residents are expecting big things from the new candidates and the new administration.

Moore said in an interview after his speech that his first order of business when he takes office next year is to put more officers on the street to combat what he said was an uptick in crime.

“Folks are concerned with the number of street projects and bumpouts, but the biggest concern they have is the increased level of violence that the current administration has often claimed doesn’t really exist,” he said.

Moore said he plans to hire more officers and also develop an “aggressive recruitment plan” to draw new police and firefighters to add to the city’s ranks. After that, he will conduct a fiscal analysis to determine where the city stands financially.

Moore said he will begin meeting with his transition team this week to pick people he wants to fill some of the biggest positions in the city. But Moore said he doesn’t plan to make a clean sweep of every position in Goodnight’s administration.

“There are some very experienced and really beneficial individuals that are in positions that serve the community well,” he said. “I don’t anticipate there to be a cleaning of the house, so to speak, but that’s all part of what the transition team will look at and decide.”

Moore’s wife, Ann, and their kids stood behind him as he thanked a slew of supporters and advisors who helped run his campaign, which focused heavily on crime and what he said was the need for more officers.

Ann told the crowd it’s only through the support and help from the community that her husband will be able to effectively run the city.

“He has the talent and support and everything he needs to run this city,” she said. “It sounds really scary to say that – for him to run the City of Kokomo. That really scares us. It does. But we know with your support, with everyone that’s around us and giving us encouragement, we love it, and we’re excited to do this as a family.”

Moore said the Howard County GOP had its fingers crossed during the campaign to sweep every seat on the ballot, but the fact it actually happened is a rebuke to the current administration and sign that people were ready for change.

“The fact it became a reality speaks to the unrest members of both parties had … and with the discontent with how things have gone in the last handful of years,” he said. “Even though a number of [candidates] are new to the political process, I think that freshness is what the community wanted and made known. People were ready for a fresh change.”

Moore said he will serve out his term as a Howard County commissioner until the end of the year and then step down once he takes over as mayor. The Republican Party will then hold a caucus to determine who will serve out the remainder of Moore’s term, which he’s held now for 11 years.

Moore ended his time on stage after winning the election posing with a blanket given to him the Miami Tribe of Oklahoma – a nod to Moore’s ancestor Miami Chief Jean Baptiste Richardville, who the county was first named for in 1844.

“After 175 years from the founding of this county, the Miami Indians now have another civil chief leading this community,” he said.