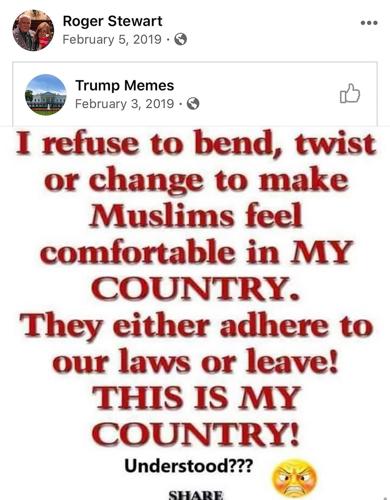 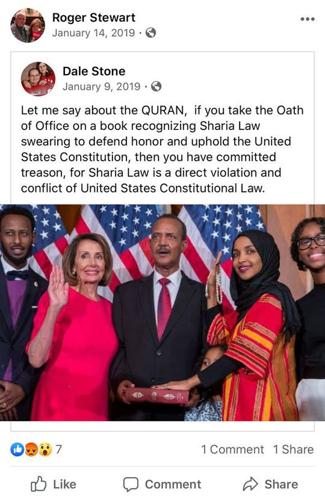 The Council on American-Islamic Relations (CAIR), the nation’s largest Muslim civil rights and advocacy organization, is calling for the resignation of newly appointed Kokomo city councilman Roger Stewart, after anti-Muslim Facebook posts he shared on his profile were uncovered.

Stewart was elected in a party caucus for the city’s 4th District last Wednesday to replace Greg Jones, who resigned Jan. 17 shortly after taking office, due to his posting of bigoted Facebook posts that called Islam a “theocratic moon cult” and Muslisms “goat humpers.”

According to an article published Tuesday by the Kokomo Perspective, Stewart shared a meme in February 2019 that read: “I refuse to bend, twist or change to make Muslims feel comfortable in MY COUNTRY. They either adhere to our laws or leave! THIS IS MY COUNTRY! Understood???”

Stewart also shared a post that called anyone who took the Oath of Office on a Quran, the holy book of Islam, as a traitor, accompanied by a photo of U.S. Rep. Ilhan Omar, D-Minnesota, who is Muslim.

According to the Perspective, Stewart’s Facebook page was deleted shortly after the newspaper brought the posts to his attention.

“Just as we called for the resignation of the previous Islamophobic official, we urge Mr. Stewart to resign from his post and for a person who understands constitutionally-guaranteed religious freedoms to be appointed in his place,” said CAIR National Communications Director Ibrahim Hooper in a press release sent to the Tribune on Tuesday.

Stewart said Tuesday he wasn’t resigning from the council, but said he was “incredibly sorry if I shared something offensive to anyone. That was never my intent.”

“I am an imperfect Christian that is also a proud American,” he said in a statement. “I served our United States proudly as an Army veteran. I take full responsibility for my shared post. These views do not represent my colleagues, friends, or family.”

Stewart said he believes the U.S. was founded on Judeo-Christian principles, and he supported the Constitution. But, he said, he believes Sharia Law, which is Islamic religious law, is in direct conflict of U.S. constitutional law.

“However, I never intended the post to appear as anti-Islamic in anyway,” he said.

The Howard County Democratic Party said in a statement that, “It seems to us that it’s time for the people of the 4th District to get their voice back into this process.”

Howard County Republican Party Chairwoman Jamie Bolser said Tuesday she was “surprised to see Mr. Stewart shared these posts from over a year ago.”

“I condemn these types of posts today as I would have back then and as I have done before,” she said in a statement to the Tribune. “There is no place for them in our society.”

Bolser said she encouraged Stewart to meet with representatives of the Muslim community, but would not comment on whether she would support his resignation from the council. The district Stewart represents includes the Islamic Association of Kokomo.

“I believe Kokomo to be an inclusive community with opportunities for all, regardless of race or religious preferences,” Bolser said. “We are all stronger when we work together, and we as a community need to continue working to be better.”

Stewart said he would “love to meet with the leaders of the Islamic Association to discuss how we can together serve our community.”

“I firmly believe that as a councilman that I have a duty and a responsibility to represent all citizens of the 4th District,” he said. “I look forward to working with the Islamic Association of Kokomo, as I do all organizations that represent members of our community.”

Stewart said in an interview last week with the Tribune following his selection to the council that he had learned a lesson following Jones’ resignation.

“It reminds me we need to be aware of what we say and do, and be careful how we express ourselves,” he said.