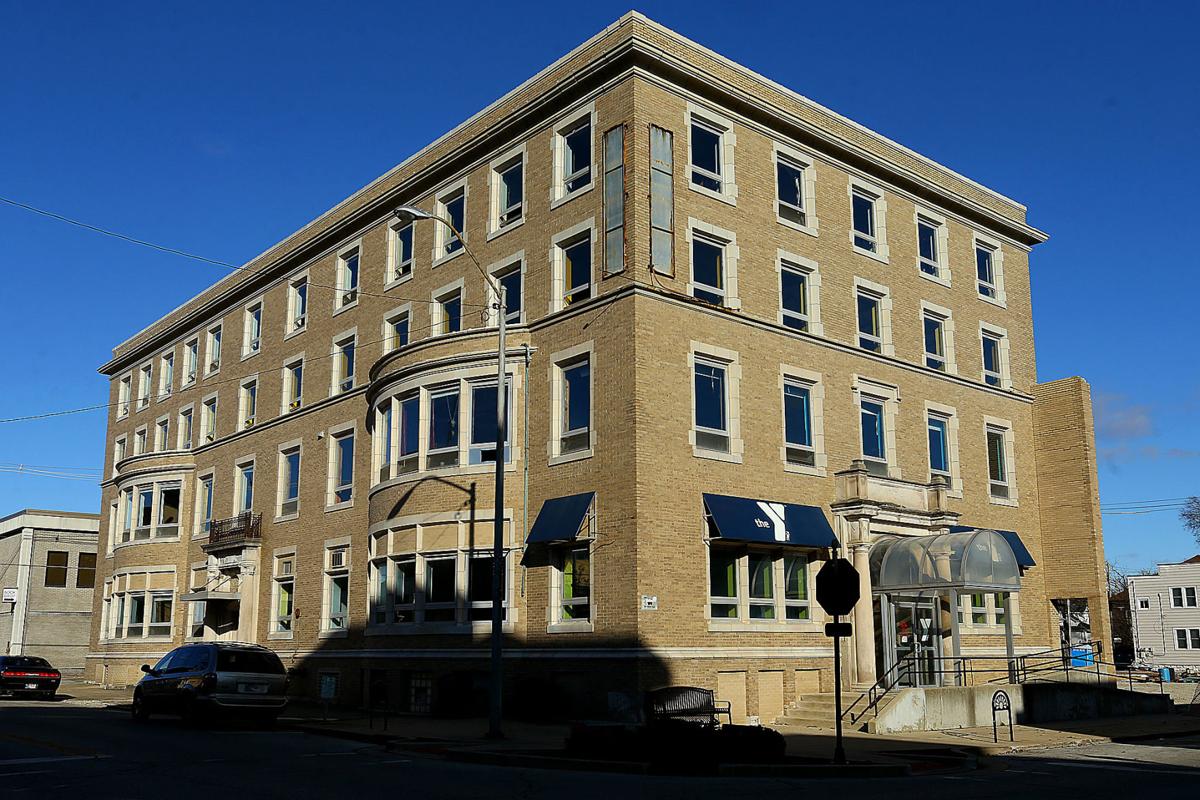 Pictured is the former YMCA building on Thursday.

This is the site, in the 400 block of West Superior Street across from Foster Park, where Fortune Companies is expected to build a two-story, 16-unit apartment complex.

This image shows the apartments slated to be built in the 400 block of West Superior Street by Fortune Companies. 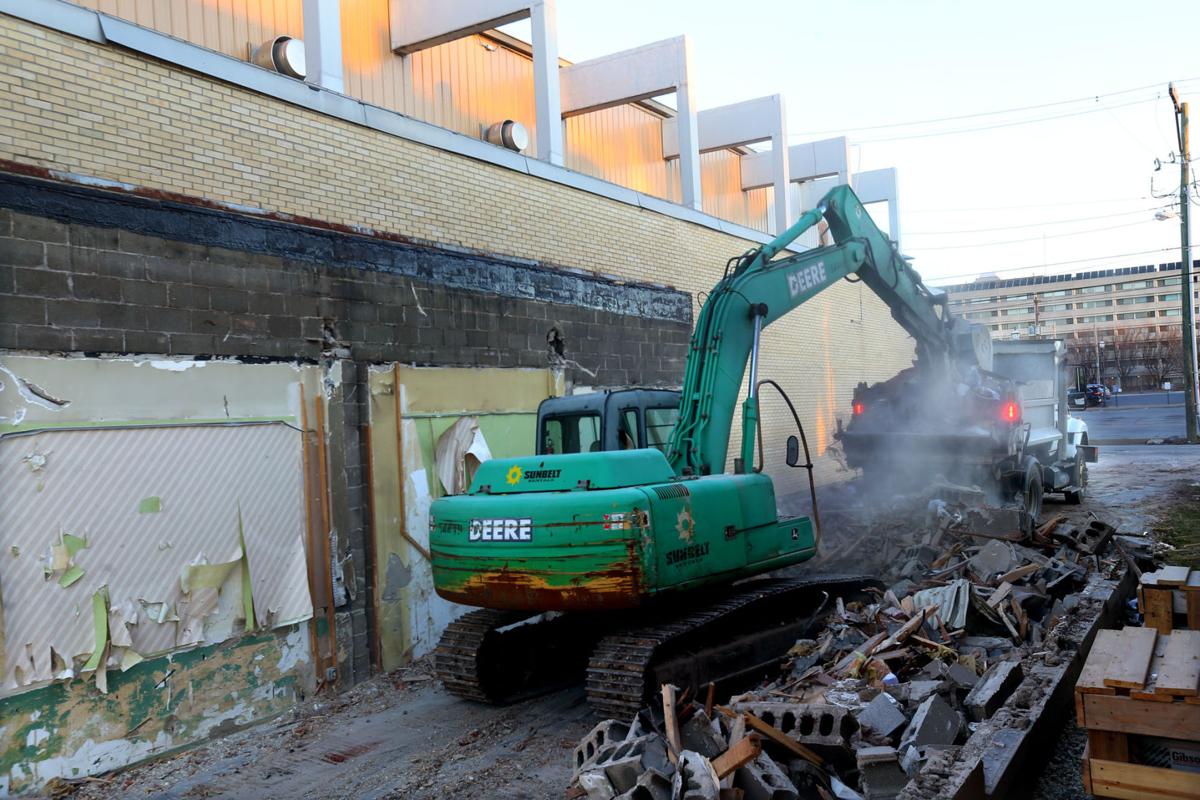 This rendering, presented to the Kokomo City Board of Zoning Appeals, shows Fortune Companies' plan for the site of downtown Kokomo's former YMCA.

Details have emerged about a new plan for Kokomo’s former downtown YMCA, an area that has been targeted for development in recent years but has so far seen only demolition.

The mixed-use project expected to develop the historic structure at the corner of Union and Walnut streets, and the area surrounding it, is the second plan to emerge publicly in recent years after an initial design released nearly three years ago failed to take place.

Matt Johnson, an architectural designer at Fortune Companies, spoke Tuesday at a Kokomo City Board of Zoning Appeals meeting about the project and how the company plans to revamp the downtown space.

“We’ve worked with the city to put together a plan to renovate it into a mixed-use commercial and apartment complex,” said Johnson, who received unanimous approval from the BZA for a variance allowing ground floor dwellings in a downtown-commercial zone.

“It’ll include the renovation of the existing historic portion and the creation of two new buildings on the same premises there.”

Three commercial spaces will be located on the first floor of the existing building, he noted, while apartments will be developed on the historic structure’s second, third and fourth floors.

Meanwhile, the two-story stretch that runs alongside the Kokomo Howard County Public Library – the portion is considered a separate building, although it is connected to the four-story structure – will be solely dedicated to residential units.

A new 5,364-square-foot two-story building behind the former YMCA structure, on the property’s south end, will also be residential.

In addition to the new building, along with a courtyard and around 30 parking spaces, will be a duplex on the property’s far-east side, along Market Street, that will feature two two-story units.

Overall, the project is expected to include 34 market-rate residential units, according to Johnson.

The new vision comes after city and development officials first announced a major planned renovation of the downtown structure in February 2017.

A media release revealed a $6.5 million redevelopment project at the site, 200 N. Union St., that would be headed by Indianapolis-based developer AP Development LLC. The project was intended to create 46 market-rate apartments.

Officials called it an “adaptive reuse” of the historic, four-story YMCA, constructed in 1911.

The Kokomo Board of Public Works and Safety then awarded a bid in December 2017 for a demolition project at the former YMCA. The bid was awarded for $540,000 to Indianapolis-based Renascent Inc.

Months later, crews began the demolition and clearance of two blighted structures at the former YMCA, specifically the second gymnasium, constructed in 1957, and the swimming pool, built in 1965.

That company, however, has now fallen by the wayside and is no longer involved in the project. Neither AP Development nor the city has responded to questions about what happened.

The project, now headed by Fortune Companies, has in recent weeks been part of numerous government meetings, although Tuesday’s BZA meeting contained the most descriptive detail to date on the prominent downtown property’s new future.

It isn’t yet in the clear, though, as the development still requires site plan approval from the Plan Commission. A complete timeline for the project has yet to emerge.

Also slated for Kokomo’s downtown area is a project that will bring a two-story, 16-unit apartment complex to the 400 block of West Superior Street, at the site of the former Turner MFG Co. building across from Foster Park.

Scott Pitcher, who heads Fortune Companies, told the Tribune Friday that the project will be similar to what his company is building at the corner of Apperson Way and Sycamore Street on the other side of downtown, citing the need for more workforce, or middle-income, housing in the city’s center.

“Here’s something that’s important: communities in the Midwest are finding that if they don’t have housing for young workers they have trouble manning the jobs that are in those areas,” Pitcher said. “You go look at a lot of cities, they’re having huge problems getting enough people to work and be able to afford to live there at the same time.”

He added: “This is a very valuable product to add for the community because it absolutely helps stabilize your downtown and support the amenities that are down here now. We think that overlooking Foster Park is going to be just a real neat place to live.”

Construction on the project, noted Pitcher, is slated to begin in March and last 18 months. It will cost more than $1.5 million.

Property records show the land is now owned by the Kokomo Community Development Corporation, although Pitcher noted the CDC will give him the property.

Fortune Companies also received a city grant for the project, but Pitcher declined to say how much the grant was worth. City officials did not respond to a request for information.

“It’s the same style grant that they’re using all over the Midwest to infill lots in their core business district,” said Pitcher. “This is just the same style incentive that communities are using across the state to try to bring this type of housing to their core.”

In addition, he noted, the project will accomplish two important goals: filling vacant downtown space while at the same time utilizing a “green” construction approach.

“It’s important when your downtown’s coming along like ours is, and I think our downtown is as successful as any of its size in the state, it’s just phenomenally important to keep filling in the holes,” said Pitcher.

“And you’re also, as a developer, it’s more of a green-style building when you utilize lots that already have utilities and everything delivered to them, and you’re not going way out north or west of town or something and developing farm-ground into lots. This is a very green-style of building by utilizing existing infrastructure.”

The space, meanwhile, last made headlines in October 2015 when firefighters spent hours battling a fire that burned through three businesses in the Turner MFG Co. building on West Superior Street.

Fire Chief Nick Glover said he believed the fire started in a space between the ceiling and roof on the southwest corner of the building between Hearn Construction and Kling’s Computers.

Thick smoke covered Foster Park at different points that day, surrounding a small group of bystanders who had gathered alongside the business owners to watch.

Located at the intersection of Sycamore Street and Apperson Way, the 58-unit development that includes three new buildings and the restoration of a historic structure that was constructed in the early 1880s by a Civil War surgeon has made quick progress this year and should be fully completed by the early months of 2020.

The Grove on Mulberry

This project is located at the corner of Apperson Way and Mulberry Street and includes eight detached townhomes. The first two townhomes are complete, and three more are expected to be finished in the spring, according to the project’s website. The developer, Kaleb Hollingsworth, has said he hopes to have all eight done by the end of 2020.

This two-story structure, located at the intersection of Main and Taylor streets in downtown Kokomo, includes 14 apartment units and 3,500 square feet of commercial space. It is expected to be completed within the next 30 days.

The most recent project of this group to emerge publicly, this development is expected by the end of 2020 to offer 10 apartments and three retail spaces inside the historic three-story structure at 513 N. Buckeye St.

Situated along the Industrial Heritage Trail in the 900 block of North Washington Street, just north of downtown, this project will bring 51 affordable-housing units to what was previously the largest area of open space along the IHT. Developers have said the project will open in summer 2020.

A group of prominent Kokomo projects either progressed or were OK’d last week by the Kokomo City Plan Commission, bringing initiatives ranging…