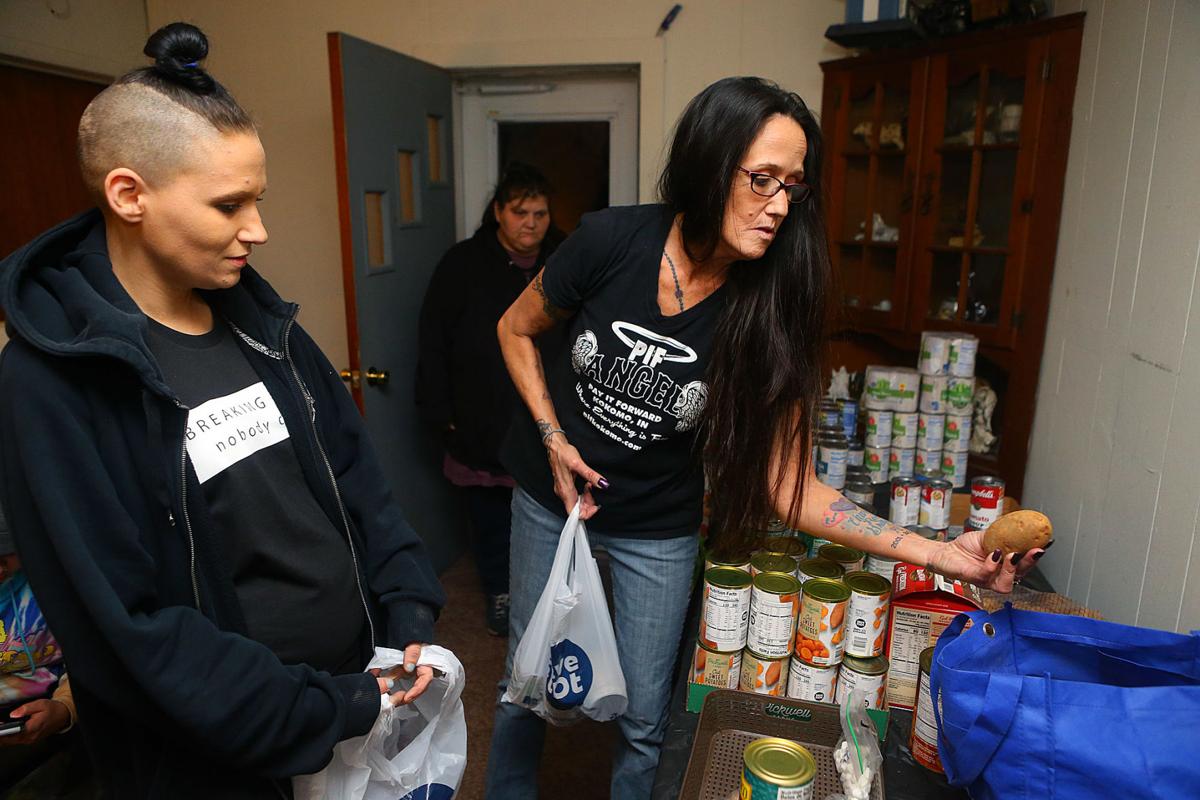 Cat Eason-Gray, right, gathers food for Katheryne Gonzalez at Eason-Gray’s home on Wednesday. Through Eason-Gray’s Pay It Forward Kokomo Facebook group, she has organized free Thanksgiving meals for 400 people in the Kokomo-area. 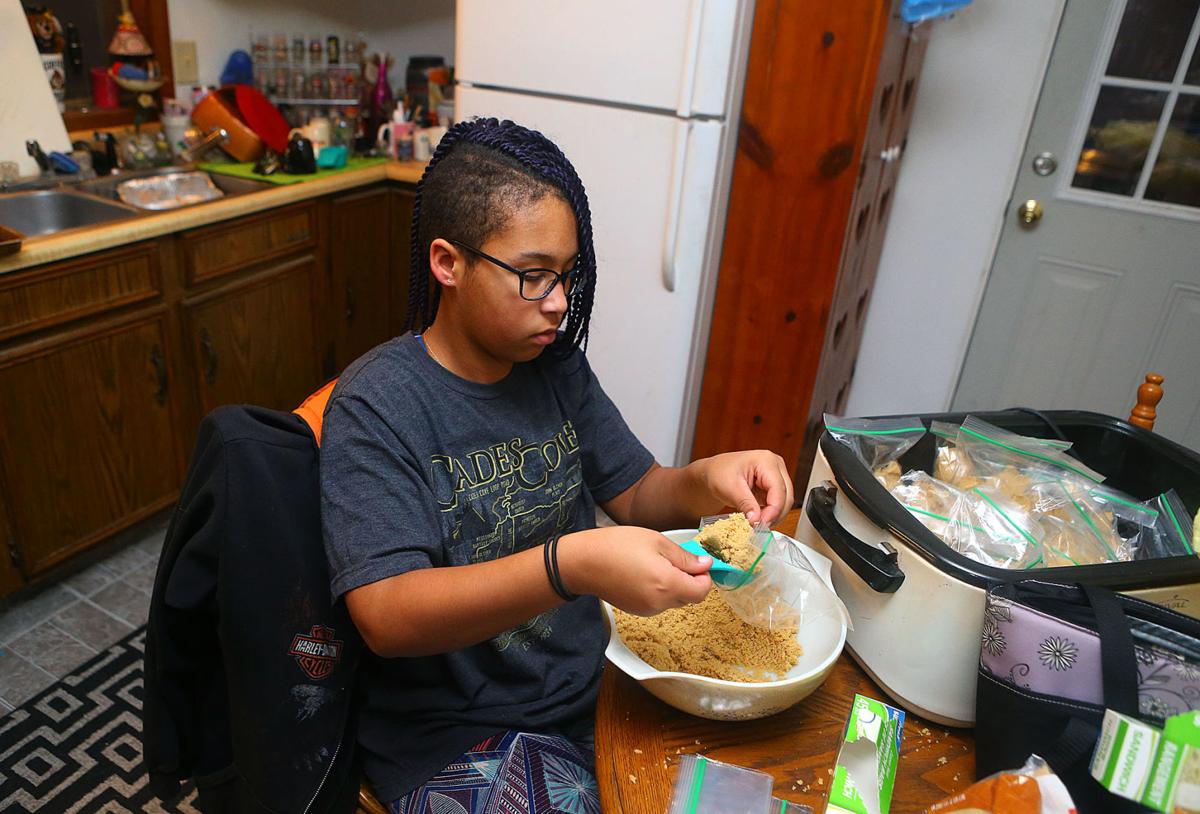 12-year-old Athalia Garland measures out brown sugar for yams at Cat Eason-Gray’s home on Wednesday. Garland is one of the Pay It Forward “angels” who has donated their time or their food to help feed 400 Kokomo-area people for Thanksgiving this year.e 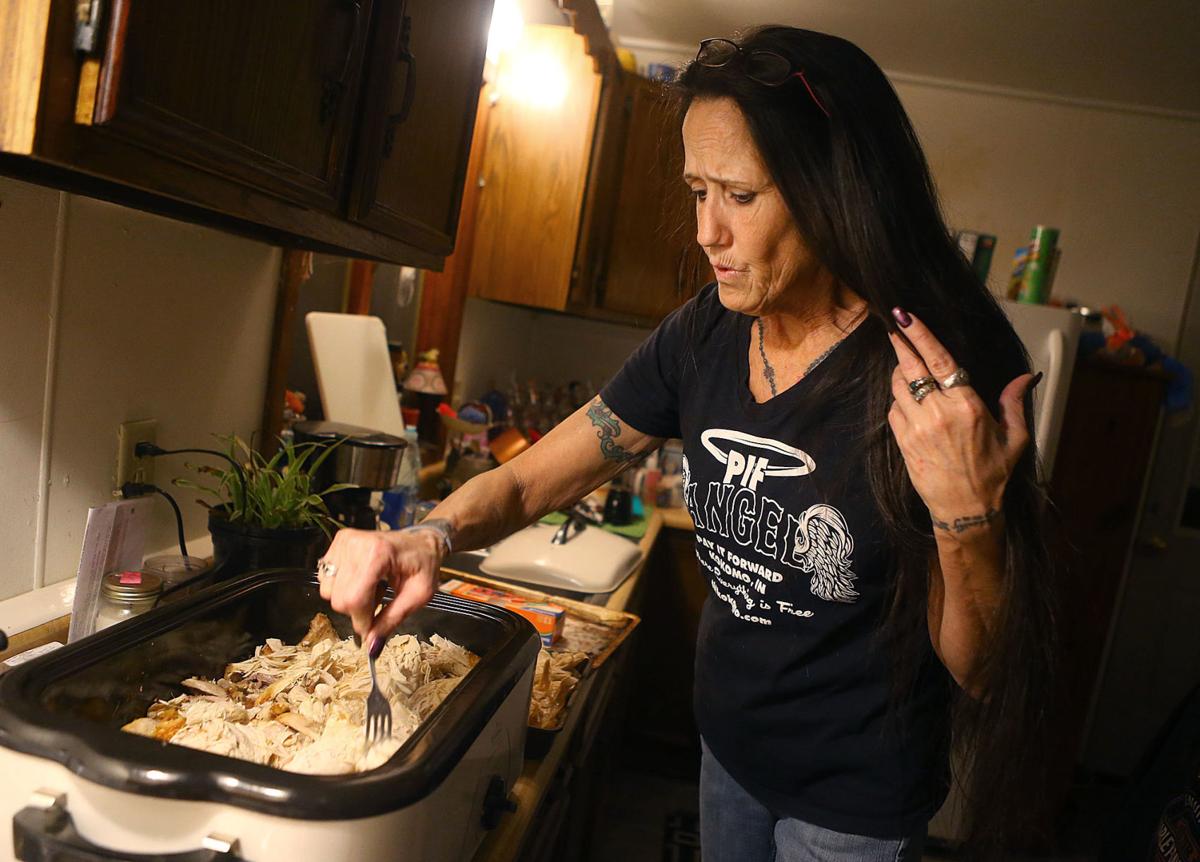 Cat Eason-Gray cooks turkey in her home on Wednesday for those who opted for a cooked Thanksgiving meal through Eason-Gray’s Facebook group: Pay It Forward Kokomo.

Cat Eason-Gray, right, gathers food for Katheryne Gonzalez at Eason-Gray’s home on Wednesday. Through Eason-Gray’s Pay It Forward Kokomo Facebook group, she has organized free Thanksgiving meals for 400 people in the Kokomo-area.

12-year-old Athalia Garland measures out brown sugar for yams at Cat Eason-Gray’s home on Wednesday. Garland is one of the Pay It Forward “angels” who has donated their time or their food to help feed 400 Kokomo-area people for Thanksgiving this year.e

Cat Eason-Gray cooks turkey in her home on Wednesday for those who opted for a cooked Thanksgiving meal through Eason-Gray’s Facebook group: Pay It Forward Kokomo.

It takes a village to raise a child, the old mantra goes. For people in need in the Kokomo area, the Pay it Forward Kokomo Facebook page has been called the online village, a community and a family.

If someone needs it, someone supplies it. The group, boasting nearly 13,000 members, is flooded with posts. Some posts asking for diapers, or something to eat, some are offering meals, clothes or toiletries.

This year, 146 families, equaling 605 people, had a Thanksgiving dinner because of the Facebook group.

Cat Eason-Gray, the page’s founder, made a post on Nov. 1 asking members of the page to sign up for meals if they needed one. Meals were limited to six people per meal, and gave the option of turkey, ham or both, corn, green beans or mixed vegetables, dinner rolls and mashed potatoes, yams or both.

Providing, preparing and delivering the meals is a major collaborative effort.

“This would have not happened without these good-hearted people in this group,” she said. “While I have a couple hundred bucks of my own in this, there’s about $1,200 just in dining.... I tell people, ‘Don’t thank me. It’s not a me thing. It’s a we thing.’ I obviously couldn’t do this without all this help.”

Eason-Gray started the page in May 2015 after she saw someone refusing to drop the price of yard sale items from $5 to $3.

“The seller wasn’t trying to make money, she just needed to get rid of it, and the woman asking actually needed those things,” she said. “I thought it was ridiculous. I wanted there to be a placed where someone didn’t have to go without because money.”

After a slow start, the notifications started rolling in, and she enlisted friends to help make the group successful. The group asks for and provides items from diapers to phone charges and most things in-between. Help for medication is provided, but there are strict rules against asking for and giving alcohol and drugs. There is also a strict policy against bullying, harassment and general rudeness.

The page also has a dedicated fund to help with small expenses, like utilities. If someone asks for utilities assistance, Eason-Gray and the administrators of the page take it to a vote and if approved, they will pay the bill directly.

While she knew the group was providing a service, she never expected it to grow as large as it has.

“God has made this bigger and better than I ever could have,” she said. “There is always someone out there willing to help.”

Chelsea Shupperd got involved in Pay It Forward after Eason-Gray helped her during a dire time. Shupperd was homeless and trying to get sober, and in need of support.

“Cat was the first person who really did make me feel like a person again,” she said. “She took me in and treated me like family.”

Now, Shupperd helps others in the group as much as she can, regularly checking Facebook to see if she can contribute.

“I love helping others. It makes me feel good,” she said. “And that’s what God calls us to do, to help others. When you do for others, you are helping yourself. It comes from a place of selflessness.”

Shupperd, a mother of five children and one step-daughter, said her kids have taken on the giving spirit. She and her fiance have taken their children to Pay It Forward events, like the Christmas and Easter parties.

“My kids will go and package up their own toys to give back,” she said. “They’ll go through their clothing, even through the cupboards, on their own volition. It’s really cute.”

Sarah Church, a teacher and mother of two, said that Pay It Forward has been a saving grace.

“There have been times when we’ve fallen short, and we’ll need things like diapers,” she said. “It’s been a huge resource.”

Church said it’s easy to pay it forward. Scrolling through the page, she’ll see posts and realize she has that item laying around. The group is more of a thriving community than an exchange of items, she said.

“You know the saying, ‘It takes a village.’ This is like the online village,” she said. “It’s a safe place to go for help, no negativity, no judgement. Everyone there sticks up for everyone. I think everyone should join the page and get involved. Get help and pay it forward.”

The post started like this: “I am a teacher in Kokomo. One of my students is pregnant. She is having a baby boy and is due in a few weeks.”