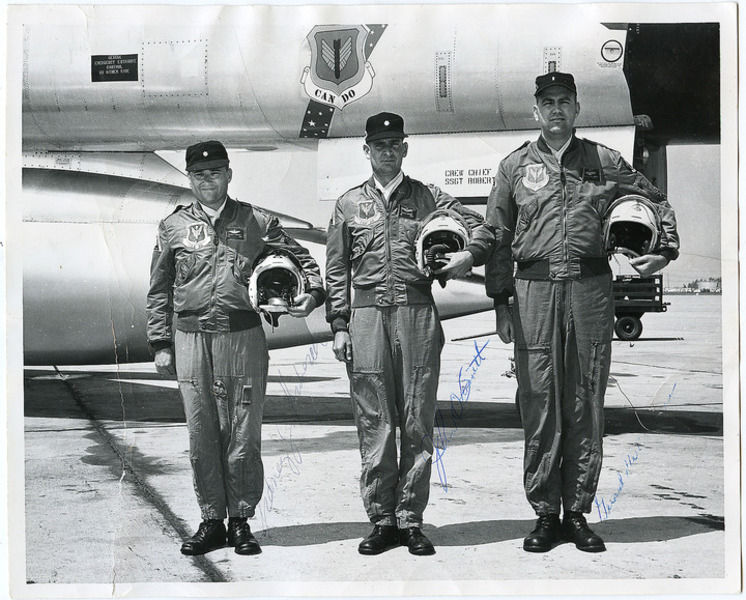 On Oct. 16, 1963, Sidney Kubesch, air commander, John Barrett, navigator, and Gerard Williamson, defensive systems operator, flew from Tokyo to London in 8 hours, 35 minutes. Kubesch, after leaving the Air Force, settled in Miami County. The flight suit and helmet he wore are on display at the Grissom Air Museum. Provided photo 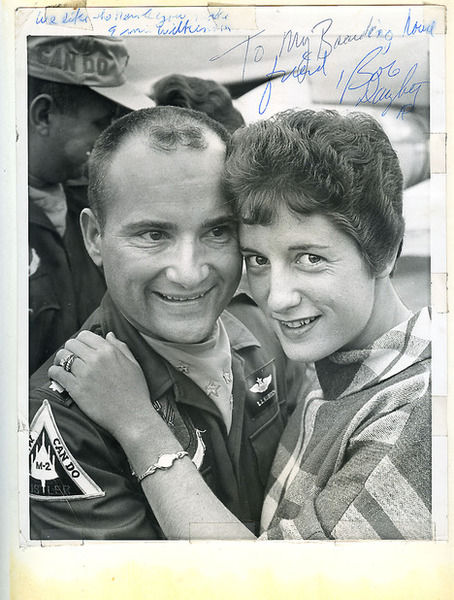 world famous: Maj. Sidney Kubesch and his wife Joanna Alice Cole Kubesch traveled to New York to appear on several TV shows after Kubesch piloted a 1963 flight that set a world record for the longest supersonic flight in history. 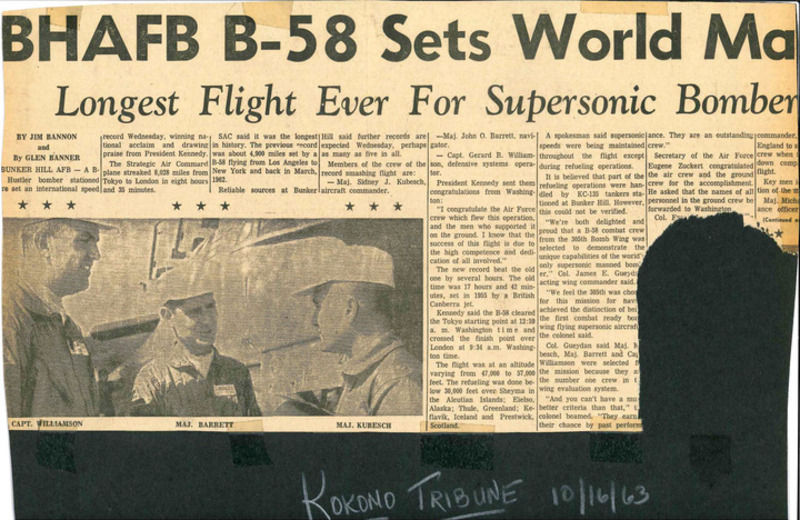 the tribune: The front page of the Kokomo Tribune on Oct. 16, 1963, details the record breaking flight from Tokyo to Japan piloted by Miami County resident Sidney Kubesch. 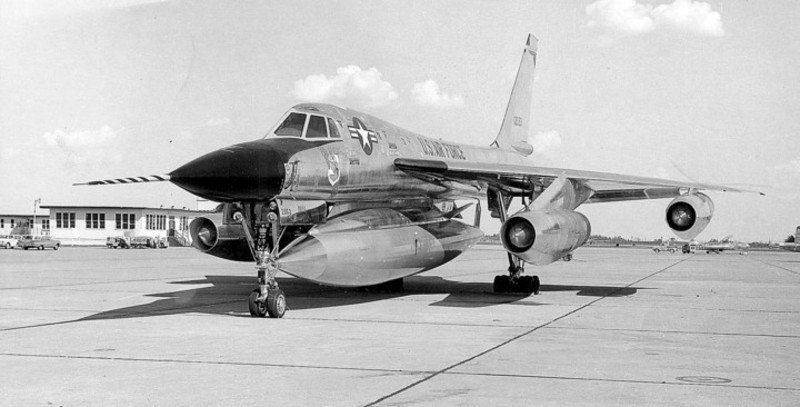 A B-58 like the one flown by Maj. Sidney Kubesch who was the commander and pilot on a 1963 flight that set a world record. 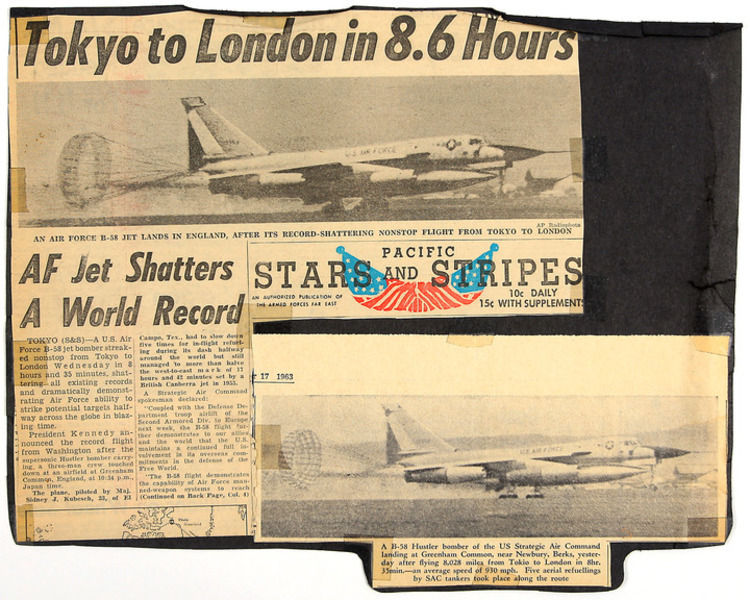 A clipping from Stars and Stripes newspaper details the record-breaking flight of Maj. Sidney Kubesch, who flew from Tokyo to London in 8 hours, 35 minutes on Oct. 16, 1963.

Lt. Col. Sid Kubesch, a Peru Air Force pilot who became a worldwide celebrity in 1963 after flying a supersonic bomber jet on a record-shattering flight from Tokyo to London, died on Monday at his Miami County farm. He was 90.

Kubesch was born in El Campo, Texas, and earned an associate’s degree from Wharton County Junior College before serving 20 years as a pilot in the U.S. Air Force, with many of his years of service during the Cold War.

Kubesch met and married Joey Cole while he was stationed at then-Bunker Hill Air Force Base. They married in August 1962, and he retired to Peru in 1970 at the request of his father-in-law, Jim Cole, to manage and operate the family farm.

But the highlight of his career was a supersonic flight from what is now Grissom Air Reserve Base on Oct. 16, 1963, that was dubbed Operation Greased Lightning. Kubesch completed the 8,028-mile trip in a B-58 Hustler nicknamed “Greased Lightning” in 8 hours, 35 minutes at an average speed of 938 miles an hour.

Although the bomber had to slow down five times for in-flight refueling during its dash halfway around the world, it still managed to halve the previous west-to-east record of 17 hours, 42 minutes set by a British Canberra jet in 1955.

Kubesch made the flight with two other crew members, who all made international headlines and brought a media blitz to Grissom and the surrounding area.

It also turned Kubesch, who was a major in the Air Force at the time, into a worldwide celebrity.

President John F. Kennedy announced the record flight from Washington after the Hustler touched down on the airfield at Greenham Common, England, at 10:34 p.m. Japan time.

“I congratulate the Air Force crew which flew this operation and the men who supported it on the ground,” Kennedy said in an issued statement. “I know that the success of this flight is due to the high competence and dedication of all involved.”

A year later at Bunker Hill Air Force Base, President Lyndon B. Johnson vigorously shook hands with Kubesch during a tour of the base.

Newspapers and other media outlets covered the story for months. One article even discussed what Kubesch and the crew ate during the flight.

“We had steak before we left Okinawa air base, bite-sized steak along the way over Japan, Alaska, and the polar ice cap, and steak when we landed,” Kubesch said in the article. “This flight is the biggest thing in my life — except my wedding, of course — but, boy, I don’t think I could look at another steak for a long, long time.”

One newspaper reported Kubesch lit up a pipe inside the bomber streaking over Tokyo, and lit a second pipe full of tobacco near the end of the trip, which some dubbed “the two-pipe flight.”

Kubesch and his wife, who at the time was an English teacher at Logansport High School, made a trip to New York to appear on several TV shows.

The flight wasn’t just a big deal because of its record-setting achievement. It was also meant to serve as a public display of America’s strength during the Cold War.

“The flight provided an operational test of sustained supersonic flight in the Arctic region,” said an Air Force spokesperson in an article in The Houston Post. “It was a demonstration of the rapid reaction possible with the manned weapons defense systems of the U.S. Air Force, capable of responding to an act of aggression anywhere in the world within a minimum amount of time.”

Talking to reporters, Kubesch said the B-58 “performed magnificently” and called the flight “routine.”

But it was anything but routine. It took five inflight refuelings near Japan, Alaska, Greenland and Iceland to keep the plane going, and Kubesch recalled flying right through the middle of the Northern Lights.

The flight also crossed the international dateline, leading to a strange kind of time travel.

“It was early afternoon Oct. 16 when we left Japan,” Kubesch said. “We passed the international dateline about Shemya and it was then the early evening of the 15th – we were back in yesterday. Over Anchorage it was near midnight local time and so we went back into the 16th again. And finally we saw the second sunrise of Oct. 16 near Thule.”

That’s what happens when you’re flying Mach 2 to the east and the sun is only doing Mach 1 to the west, he said.

Polly Dobbs, Kubesch’s daughter, said in a 2013 interview that her dad moved to several different Air Force bases before settling down on a farm in Miami County after leaving the military, but continued to fly planes privately into his 70s.

Sid and his wife have five children, numerous grandchildren, including a first-year circus performer, and resided on their family farm in Peru. Funeral arrangements are pending.