The Tipton Solar Park, on 31 acres along Ind. 28, was dedicated on Sept. 30, 2019. The 17,496 panels produce just over 5 1/4 megawatts of energy. Electrical engineer Phil Lopresto, who designed the system, talks about how it works. 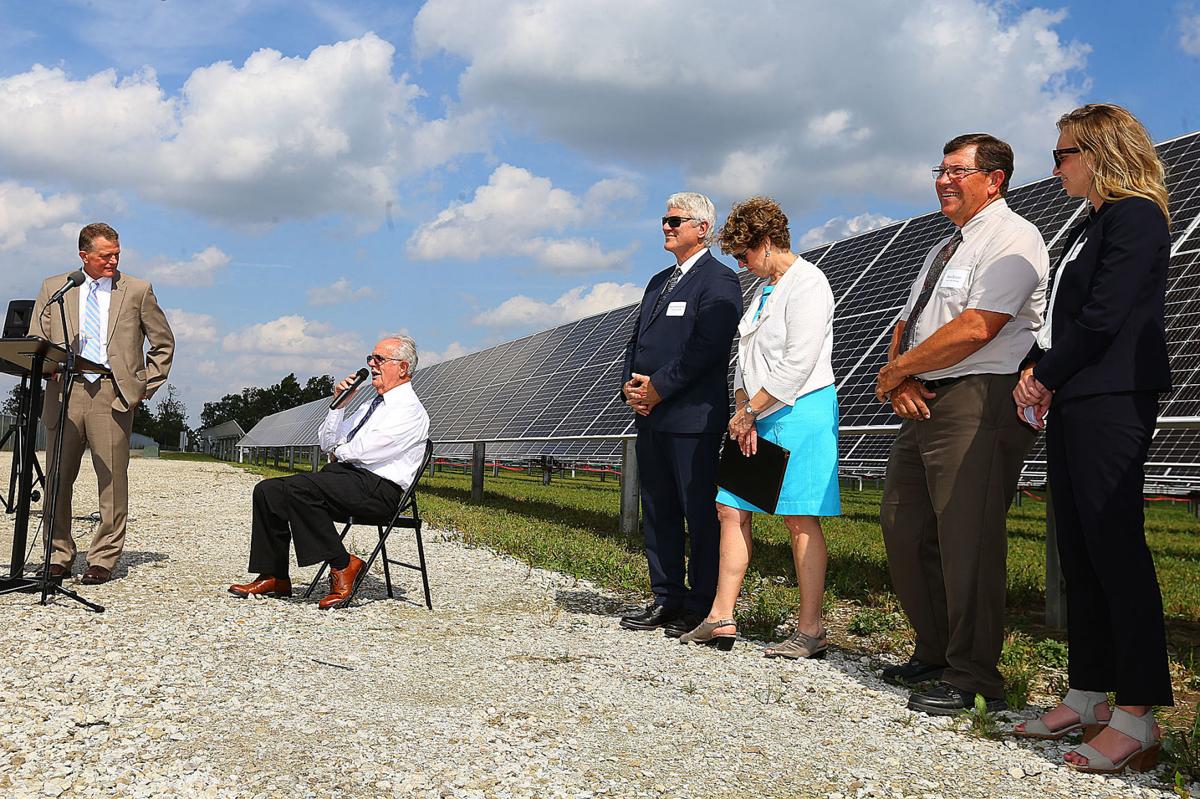 The Tipton Solar Park was dedicated with Dick Klein from the Tipton Utility Service Board, talking about the project, on Sept. 30, 2019.

TIPTON – State and local officials Monday celebrated the opening of a new solar park in Tipton after working for five years to bring one to the city.

The new park went on the grid in July, producing enough electricity for more than 850 homes in Tipton. The project is located on 31 acres on the far west side of the city along Indiana 28.

The facility was constructed by the Indiana Municipal Power Agency (IMPA), an energy co-op made up of 61 communities in Indiana, including Tipton, Peru, Gas City and Anderson.

Jack Alvey, IMPA’s chief operating officer, said the Tipton facility marks the 21st solar project the company has constructed since 2014, when it first launched an initiative to bring 200-megawatts of solar into its energy portfolio.

He said when Tipton officials learned the company was expanding into solar energy, they immediately began looking for a location to build a park in the city.

“They desired to have a facility like this that would bring a renewable power supply and resource to their town,” he said Monday to a small crowd gathered for a ribbon-cutting ceremony.

But finding a location was no easy task, said Rex Boyer, manager of Tipton Municipal Utilities, which worked closely with IMPA on the project.

He said for more than four years, officials looked at 19 locations around the city, but none of them panned out until a local farmer agreed to do a land swap with the utility company, which gave the farmer land on the city’s north side in exchange for the property along Indiana 28.

“This farm has been in his family for well over 100 years,” Boyer said. “He farmed it himself for many years. To break up the family farm is not easy to do sometimes, so we appreciate them doing it.

Now, the park is generating 5.25 megawatts of power through the nearly 17,500 solar panels installed on the property. Those panels are attached to modules which rotate and turn to track the sun to generate the most energy possible.

U.S. Rep. Susan Brooks, who represents Tipton and parts of Howard County, said Monday the project is the perfect example of a small town leading the way on alternative energy solutions that will help curtail climate change.

“Congratulations to Tipton,” she said. “This is awesome and very exciting. I think it’s awesome that it’s right out here on the highway so people can see what an investment you made and how forward thinking you are.”

Brooks, who serves on the House’s Energy and Commerce Committee, said the solar farm is the kind of project her committee looks to diversify and change the nation’s energy portfolio and move toward cleaner energy.

“We are very focused on trying to ensure that our environment is cleaner and make sure we have solutions for what young people are looking for,” she said. “They want our country to be looking forward and making sure we have the safest, best and cleanest environment and we do as much for our climate as we possibly can. It’s through these solar projects that can happen.”

IMPA’s Alvey said that’s why his utility has six other solar projects currently under construction in cities and towns around the state, and nine other sites are in the preconstruction development phase.

“Our goal is to provide our customers with a reliable, low-cost, environmentally responsible power supply, and we continue to do that by adding these renewable resources to our portfolio,” he said.

Dick Klein, a member of the Tipton Utility Service Board who spearheaded the effort to bring a solar park to the city, said the fact the facility is producing clean, cheap energy for local customers is something for which Tipton should be proud.

“It takes a lot of money to develop this, but in the end, you know that one thing is free, because God is providing the energy when it’s all said and done,” he said. “When you build a coal plant, you’ve got to buy the coal. You don’t buy anything here.”

Tipton Mayor Don Havens agreed. He said Tipton residents are excited to finally have a solar farm in the community generating clean energy after five years of pounding the pavement to find a location for the project.

“When you’re mayor, you get a lot of complaints from time to time,” Havens said. “I had no complaints about this solar park. Not one. Nada. … We’re glad to have this solar farm here. Tipton is proud of it.”

The park marks the second solar facility to open in Tipton.

In September 2018, Tipton Community School Corp. fired up a 600-kilowatt solar farm in a move school administrators said should save the district $2.2 million over 20 years.

That project consisted of more than 1,900 individual solar modules, which can generate up to 85% of the energy used by the entire school district. The facility is located on land east of the school’s nature center.

The Indiana Municipal Power Agency is set to build a new $19 million solar park near Peru that will supply more than 8% of the city’s electricity.