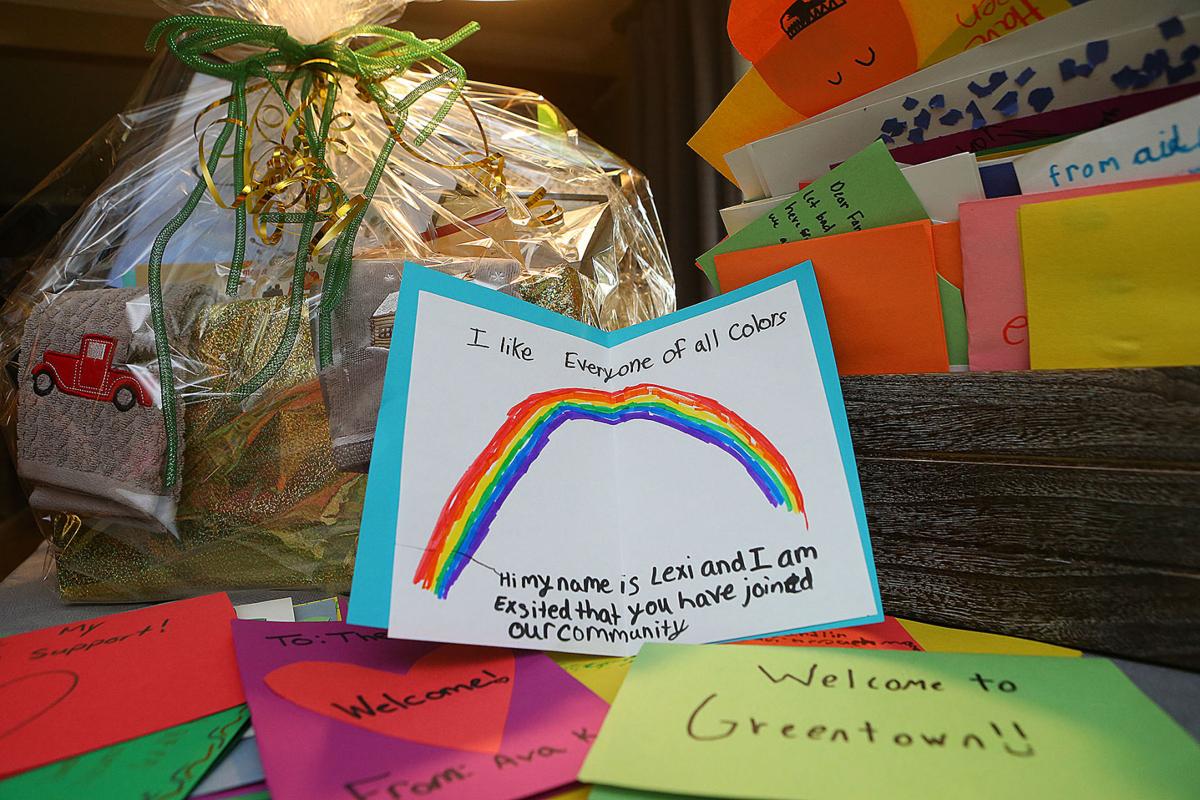 Numerous cards from Eastern students, along with a welcome basket containing items from local businesses, were given to the Greentown family recently targeted by a letter that contained derogatory racial comments toward an adopted black child. Kelly Lafferty Gerber | Kokomo Tribune 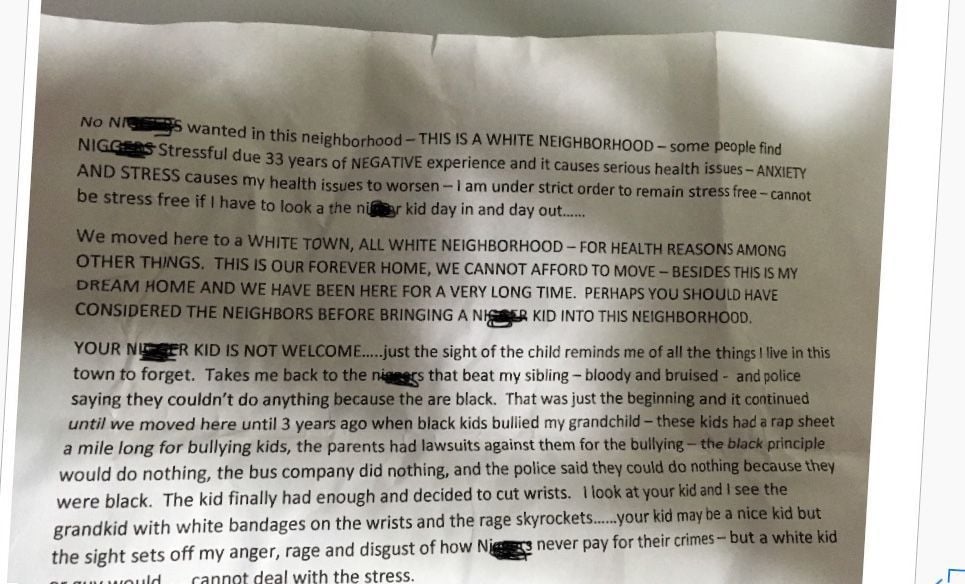 The arrest of a 63-year-old Greentown resident for leaving a letter riddled with racist, vulgar slurs on her neighbors’ front door has sparked national outrage and a renewed discussion about hate crimes in Indiana.

Deborah Cantwell, charged with misdemeanor counts of intimidation and criminal mischief, was arrested Oct. 25 after police say she left a bigoted letter aimed at a black child on the door of her neighbors’ recently purchased home.

The letter, targeting the family’s adopted black son, was called “racially offensive and threatening in nature” in a probable-cause affidavit and detailed Cantwell’s desire for “a white neighborhood.”

“YOUR N---- KID IS NOT WELCOME,” typed Cantwell in all-caps.

The incident – which has gone viral and been featured in articles by the New York Daily News, Newsweek, Time, The Washington Post and others – also has generated thousands of dollars on a GoFundMe page set up by the victimized family.

More than 230 people had donated in 17 days – the letter was discovered on Oct. 13 – to a cause the family says includes legal fees, a fence and a security system for their new home.

“I’m not so naive to think that racism doesn’t happen here, I’m sure it does, we’ve even discussed it and how to handle it and what to do,” wrote the son’s mother on the GoFundMe page.

Cantwell, who has entered a not guilty plea, is scheduled for a bench trial on Feb. 27, 2019, in Howard Superior Court 3. Kokomo attorney Stephanie Doran, who did not return a request for comment, is representing Cantwell.

One person following the story is Indiana state Rep. Tony Cook, R-Cicero, who has drafted a hate-crimes-related bill he plans to file in the upcoming General Assembly session.

Cook provided a statement to the Tribune about Cantwell’s racist letter and how it relates to the conversation surrounding hate crimes legislation in Indiana.

“The Greentown incident demonstrates the bigotry and discriminatory ignorance that remains entrenched in parts of our society,” he stated in an email Tuesday. “Accordingly, judges need clear discretion and delineation of individuals and groups that commonly face hate bias motivated crimes.

“This incident would probably fall within the boundaries of low-level misdemeanor crime prosecution … but since it is in Indiana, no enhanced sentencing for a ‘Hate Crime’ will occur.”

Cook added: “People can still say and do stupid discriminatory actions (e.g. letter). However, in my opinion, incidents nationwide just this past week demonstrate a need for ‘Hate Crime’ legislation to adequately address the severity of these actions.”

The FBI, meanwhile, defines a hate crime as “a traditional offense like murder, arson, or vandalism with an added element of bias.”

When collecting statistics, the bureau categorizes hate crimes as a “criminal offense against a person or property motivated in whole or in part by an offender’s bias against a race, religion, disability, sexual orientation, ethnicity, gender, or gender identity.”

In conjunction, Cook noted in previous comments his bill “will have aggravators and sentence enhancements for more clear use by judges and prosecutors, and it will specifically spell out certain groups and individuals who have experienced being consistent targets for bias crimes.”

The Greentown crime is just the latest prominent racial incident to strike the area.

In July, anti-Semitic graffiti was found at a Carmel synagogue, including a swastika and other Nazi symbols. That incident prompted Gov. Eric Holcomb to call for hate crimes legislation from the Indiana General Assembly.

Just two years ago, in October 2016, during another heated election cycle, Kokomo residents on North Purdum Street found “KKK” spray-painted on their political signs. The racist insignia was also found on a truck, trailer, utility pole, fence and even a home’s front door.

“I think that it’s time because we already have in the law that we’ve given judges the ability to enhance these sentences. So why not clarify it and become one of 46 states with a hate crime law instead one of five without one. It’s not a stretch,” Holcomb told the Tribune in a September interview.

“This isn’t about hateful thinking. This is about committing a crime. This is where this issue kind of got off track. People thought we were going to criminalize the thought and speech. It’s quite the contrary … Indiana is sending a message that if you’re targeted and a crime is committed on you, judges will take that into account.”

Months earlier, in January, it became clear Indiana would remain one of just five states without a hate crimes law after Republican Senate leaders announced they were killing a bill that targeted crimes motivated by bias.

A poll conducted by Ball State University found 65 percent of Indiana residents support the creation of a hate crimes law. But lawmakers faced pressure from activists who argue a hate crimes law would create a special protected class of victims.

A provision that would have protected transgender people was a particular sticking point.

The bill by Republican Sen. Susan Glick would have specifically stated in law that a judge could take into account whether a crime was motivated by race, religion, color, sex, gender identity, disability, national origin, ancestry, sexual orientation or ethnicity.

It also would have required such crimes to be reported to the FBI. Currently, Indiana law enforcement agencies are not required to do so.

Opponents to hate crimes legislation have pointed to a provision in existing state law that allows a judge to consider any special circumstance during sentencing.

That, combined with existing court precedent, means a judge could indeed consider crimes motivated by hatred during sentencing, they argue.

“Indiana judges already have the ability to consider the motivation of the criminal and the characteristics of the victim when determining aggravating circumstances at sentencing,” said state Rep. Heath VanNatter, R-Kokomo, in the Tribune’s election guide earlier this month.

“With that being said, I am open to looking further at language that may be presented.”

The lack of hate crimes legislation, and the continued failure of the Legislature to pass such a bill, has been criticized by leaders in Hoosier business to minority groups.

But hurdles remain for those advocates.

That gridlock was on display as recently as mid-October when a legislative study committee failed to forward a recommendation regarding whether Indiana should create a hate crimes law.

The Study Committee on Corrections and Criminal Code heard four hours of testimony Oct. 11 before approving a final report that said some members support a bias-motivated criminal statute and some don’t.

Hate crimes legislation, marijuana legalization and local issues like an innkeeper’s tax raise and the possibility of a new magistrate judge h…