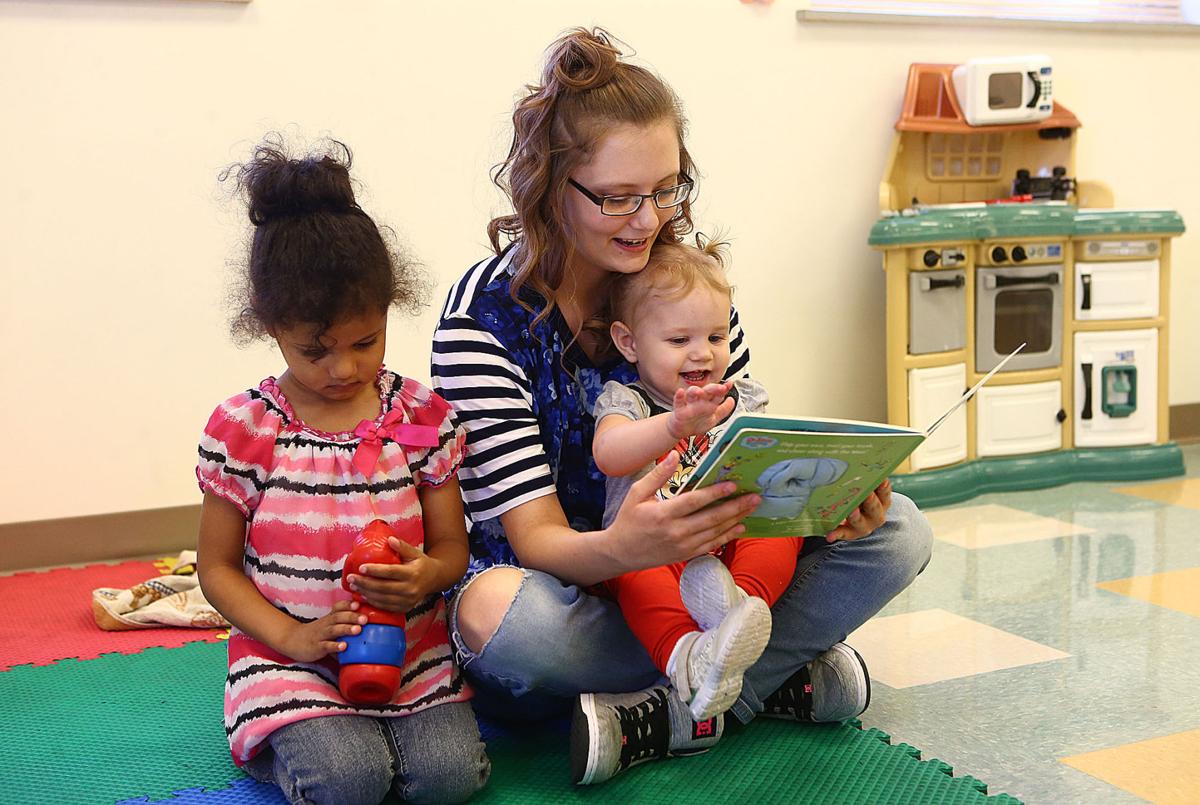 Clarissa Dunn spends time with her daughters 4-year-old Elenna, left, and Kinzie, 1, at the Excel Center on May 31, 2017. Kelly Lafferty Gerber | Kokomo Tribune 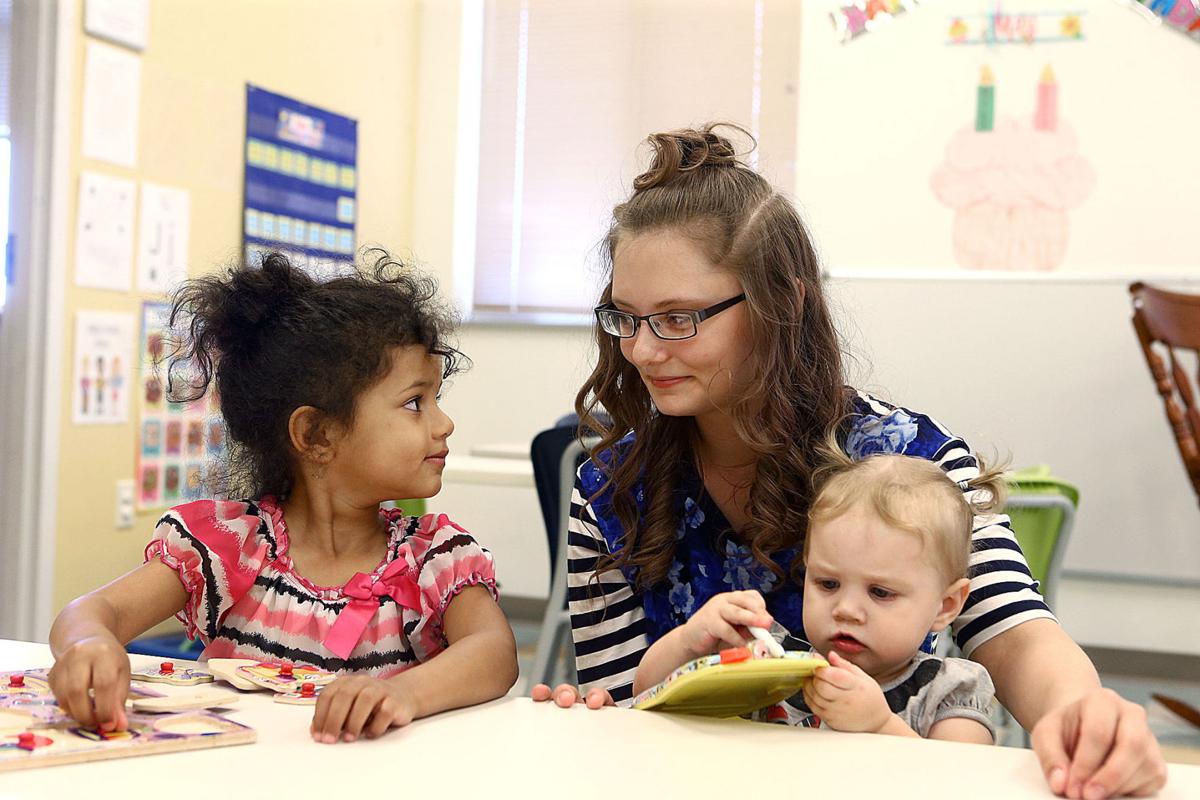 at the Excel Center on May 31, 2017. Kelly Lafferty Gerber | Kokomo Tribune 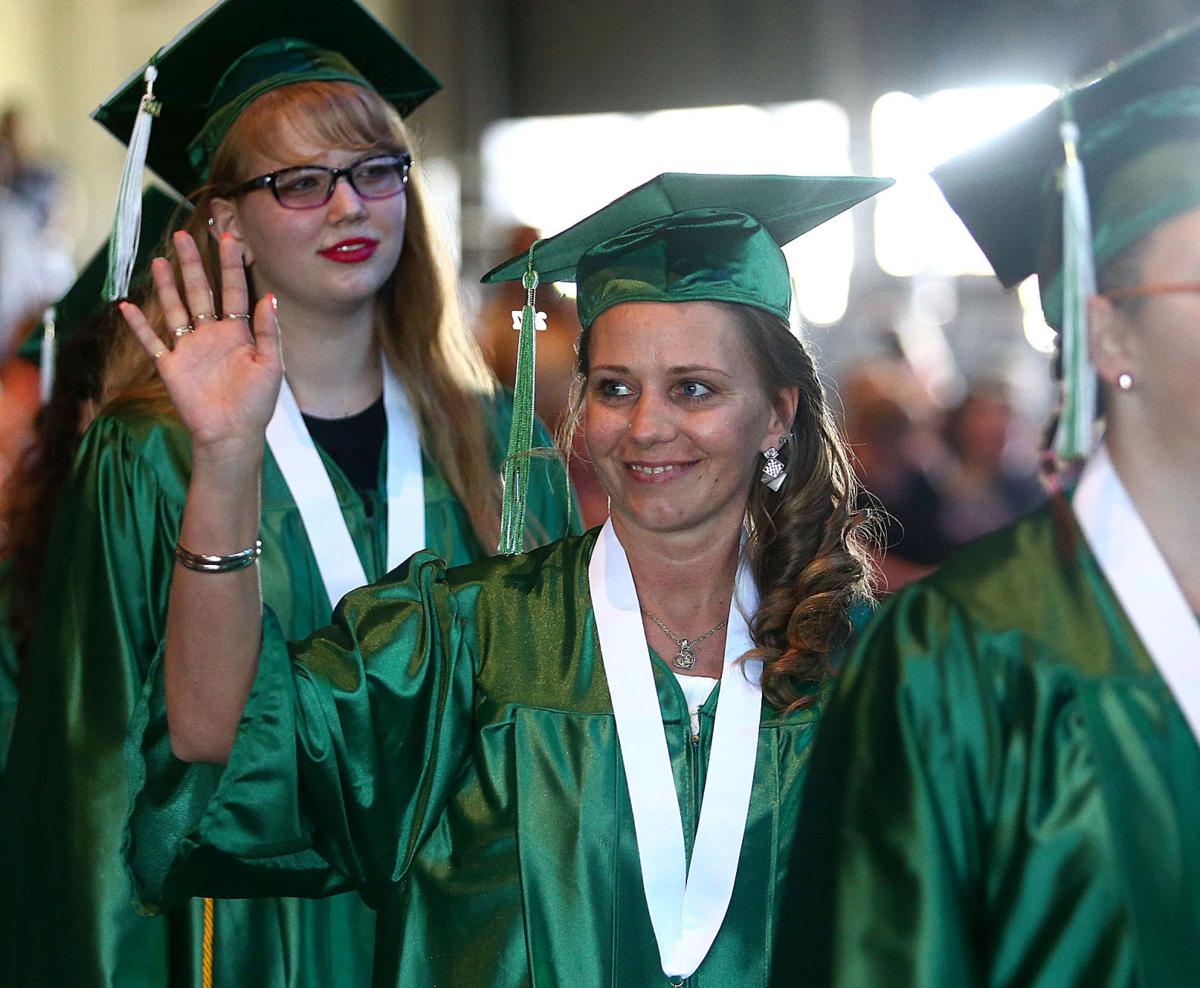 Amanda McKay waves as she walks in during the Excel Center graduation on June 8, 2017. Kelly Lafferty Gerber | Kokomo Tribune 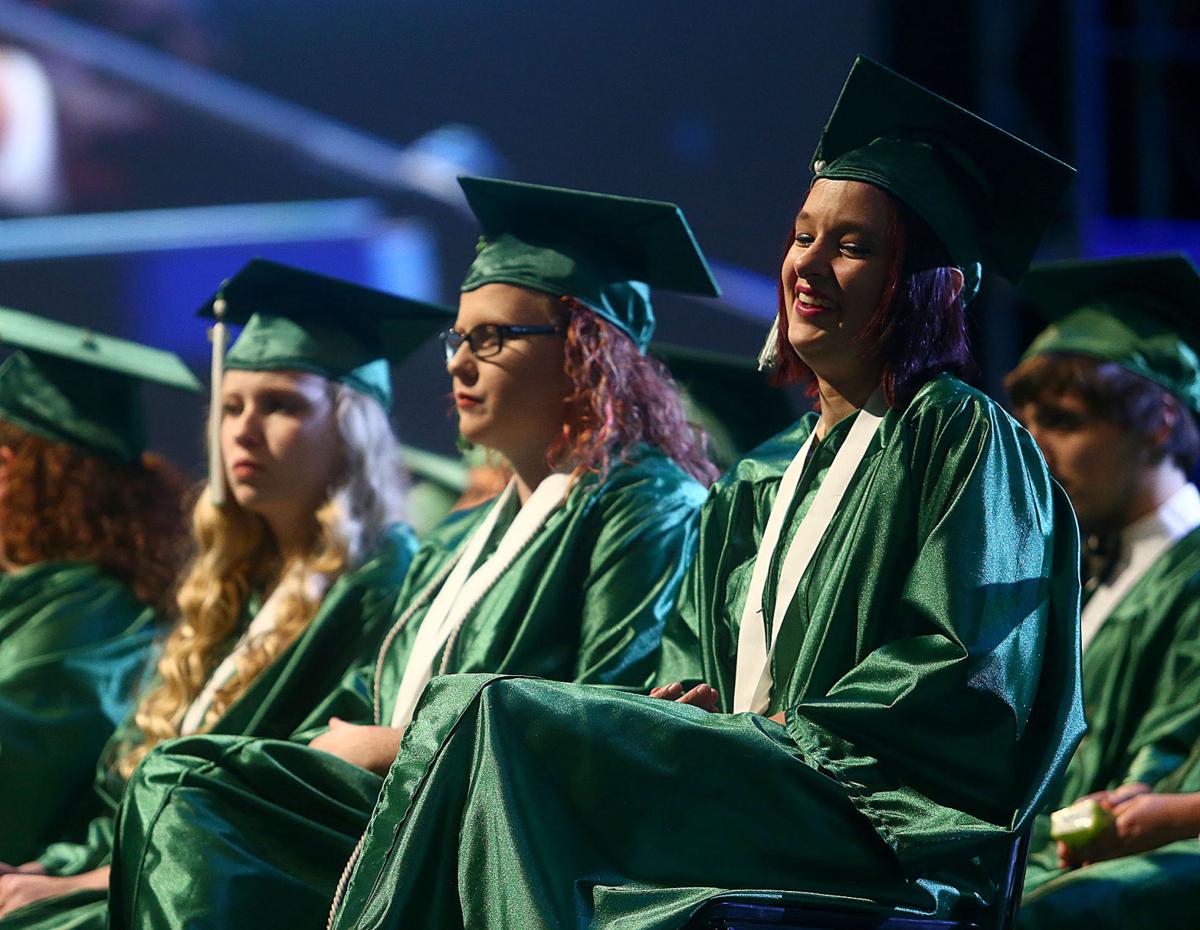 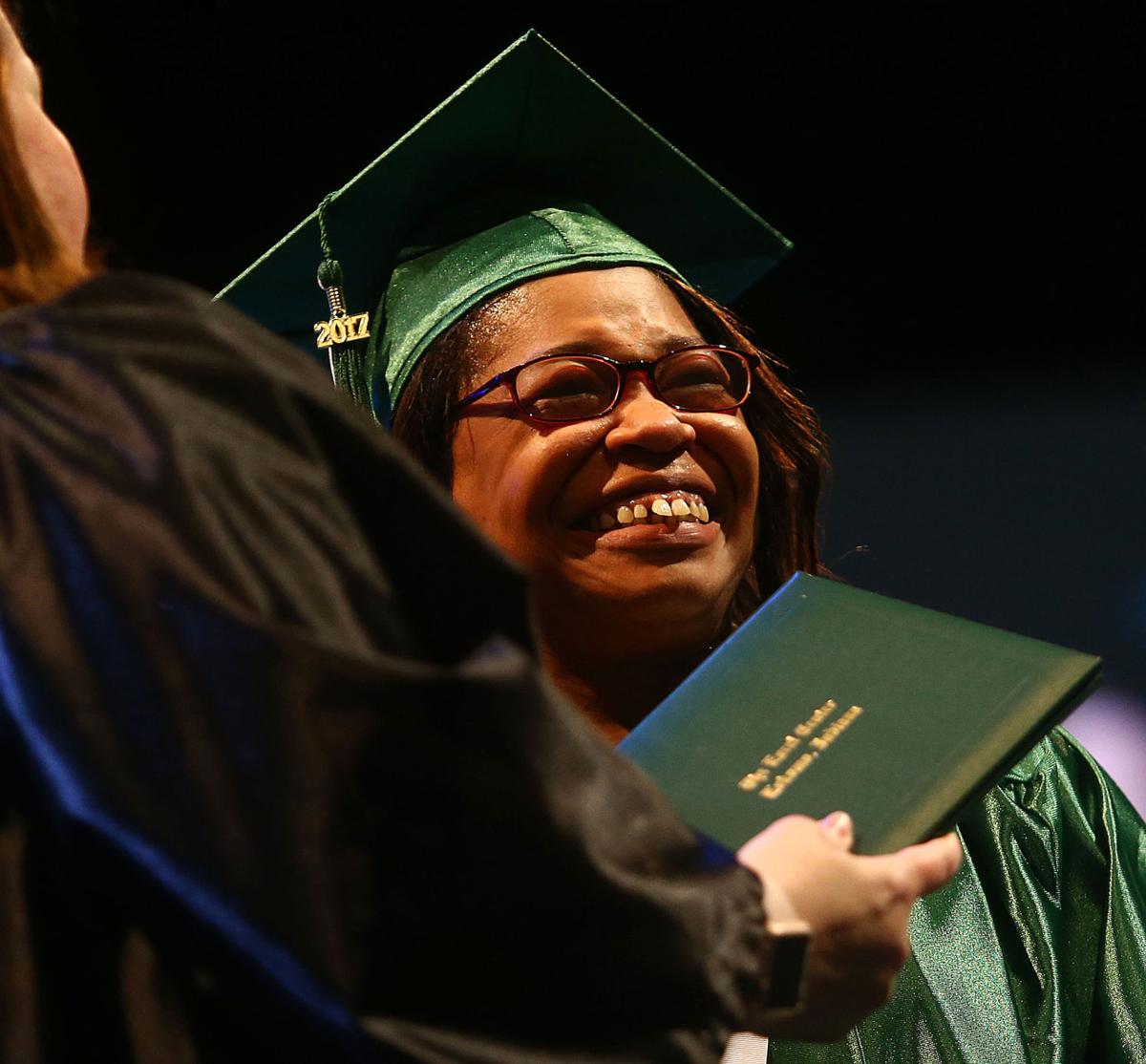 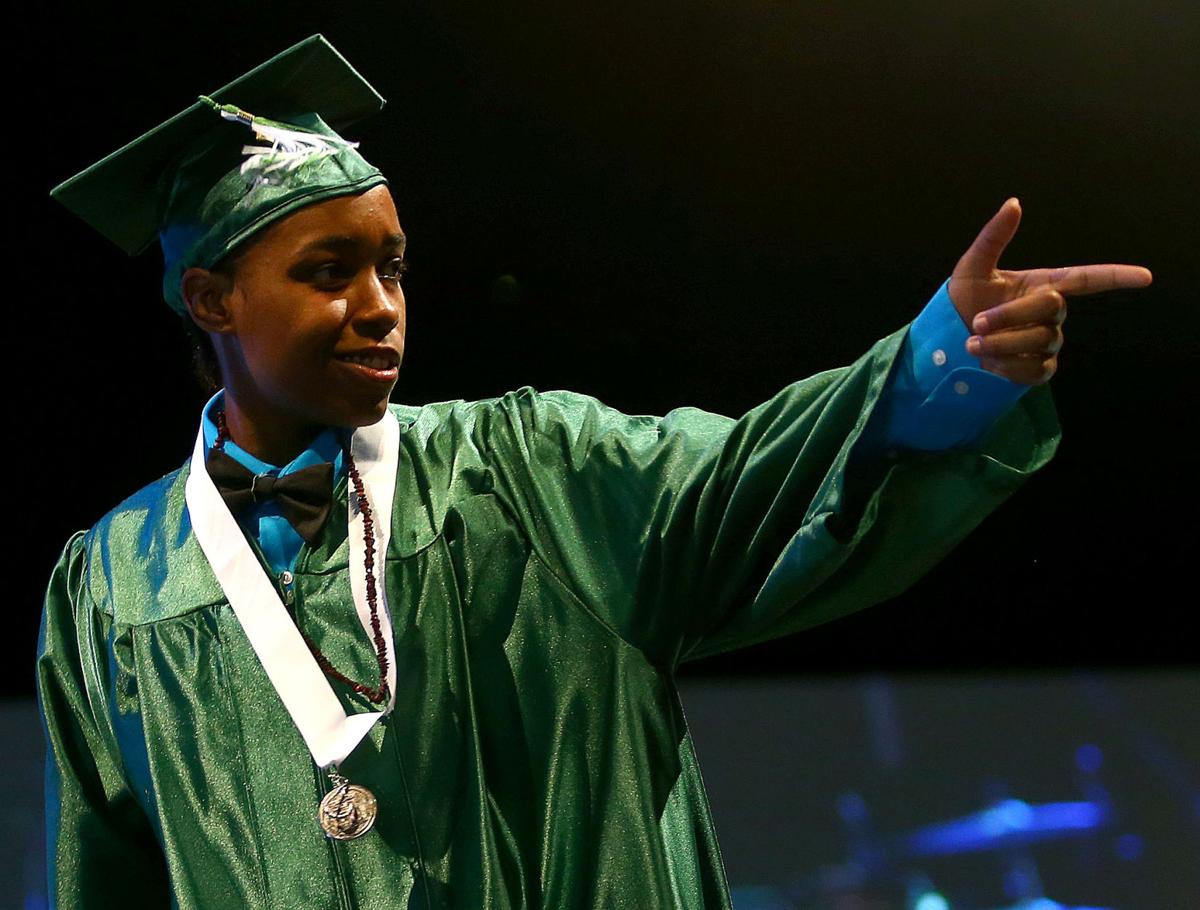 Diamond Smith points to the crowd from the stage during the Excel Center graduation on June 8, 2017. Kelly Lafferty Gerber | Kokomo Tribune

Clarissa Dunn spends time with her daughters 4-year-old Elenna, left, and Kinzie, 1, at the Excel Center on May 31, 2017. Kelly Lafferty Gerber | Kokomo Tribune

at the Excel Center on May 31, 2017. Kelly Lafferty Gerber | Kokomo Tribune

Amanda McKay waves as she walks in during the Excel Center graduation on June 8, 2017. Kelly Lafferty Gerber | Kokomo Tribune

Diamond Smith points to the crowd from the stage during the Excel Center graduation on June 8, 2017. Kelly Lafferty Gerber | Kokomo Tribune

Clarissa Dunn was prepared to go through life without a high school degree. But then she heard about the Excel Center.

Dunn, who graduated last night from the Excel Center in Kokomo, was attending Kokomo High School in 2010 when her mother became ill. Dunn eventually dropped out of Kokomo High in 2011 after realizing that she needed a more flexible schedule to be able to take care of her mother.

After a few years, Dunn heard from her brother about a new program in town. She enrolled in the Kokomo campus’ second semester in 2013.

The school is run by Goodwill Education Initiatives, Inc., a non-profit organization formed by Goodwill of Central and Southern Indiana. It offers adults and high school students an opportunity to earn a Core 40 high school degree in a unique setting.

Tom Pengelly, director of the Excel Center Kokomo campus, said the program works because it offers students a second chance to earn a degree, and they’re enrolled by choice.

“The students who are here are ready,” he said.

While the goal for students is to earn a high school degree, the goal for the staff is to remove barriers, which is why the program is free, Pengelly said.

“Money is a barrier,” he said. “If you’re coming to us asking for an education, which you have the right to get, how can we charge you?”

When she looked into the Excel Center in 2013, Dunn realized it had everything she needed. Aside from being able to earn a high school diploma for free, Dunn was also impressed with the free daycare center, which allowed her to bring her two daughters to school with her. Initially, she was able to attend for four hours a day rather than from 9 a.m. to 4 p.m., which fit her need for a flexible schedule.

She was a little nervous when applying because she had to take placement tests, which she said she didn’t do very well on.

“It was kind of discouraging,” she said. “I didn’t test very high, and I was discouraged but I came anyway.”

The program changed after her first semester so students must attend from 9 a.m. to 4 p.m., but Dunn said having a free daycare allowed her to stick with it. Her daughters, Elenna, 4, and Kinzie, 1, loved spending time with their friends at the daycare each day, Dunn said.

“It’s taken a lot of the stress off,” she said. “I don’t have anyone I can depend on. My mom is sick and my grandmother lives in Russiaville, and those are the only two I could depend on. The daycare has relieved the stress.”

When Dunn had her daughter Kinzie, she took a year off, which meant Elenna couldn’t attend the daycare.

“I wish the daycare accepted kids from other programs,” Dunn said. “I know [my daughters] really like it.”

During that year off, Elenna would regularly ask her mom when she could go back and see her friends at the Excel Center, and Dunn said she’s worried about how her daughter will react after graduation, but she’s thinking of enrolling her at the Darrough Chapel Early Learning Center.

But it wasn’t just that Dunn was able to bring her daughters to school with her. She said she felt like the teachers really cared about her.

“They work one-on-one with you,” she said. “They want you to pass, and try to do everything they can to help you.”

It wasn’t all an easy ride. Dunn had to retake an English class, struggling with a learning disability. But she’s pushed past her obstacles, even earning college credit at Ivy Tech Community College.

Since June 5, Dunn has been attending the Ivy Tech Kokomo ASAP class, which is aimed at students coming straight out of high school. Before starting, Dunn said she was nervous about the program.

“I’m scared,” she said. “I’ve been here four years. But I’m excited and glad to finally be done with it.”

Now, however, Dunn said she’s no longer worried. She’s settled into the ASAP class and is ready to continue her education.