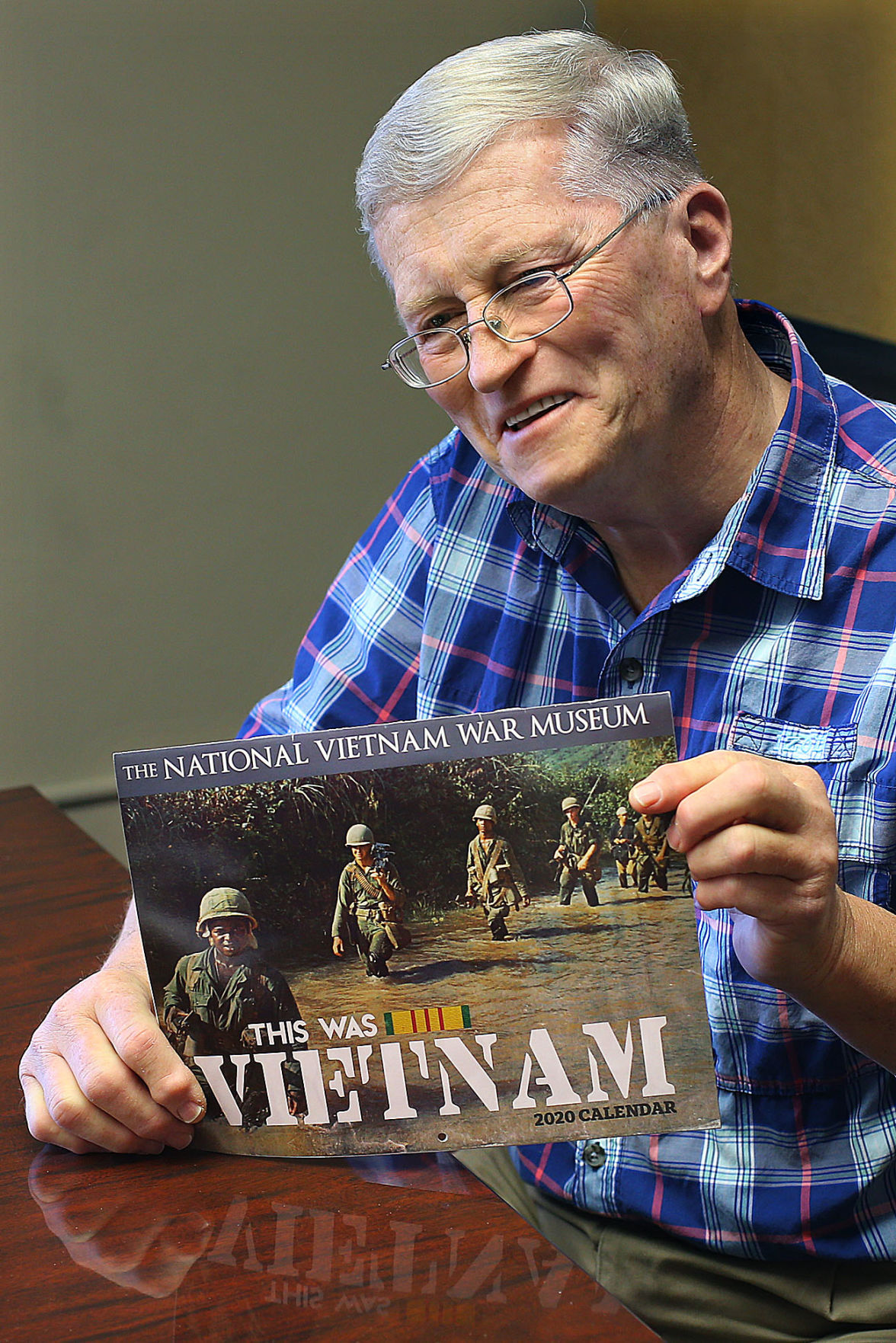 Roger Rayl talks about serving in combat during the Vietnam War on Nov. 8, 2019. As he talked he would show photos such as this one that showed pretty accurately what it was like for him. Tim Bath | Kokomo Tribune 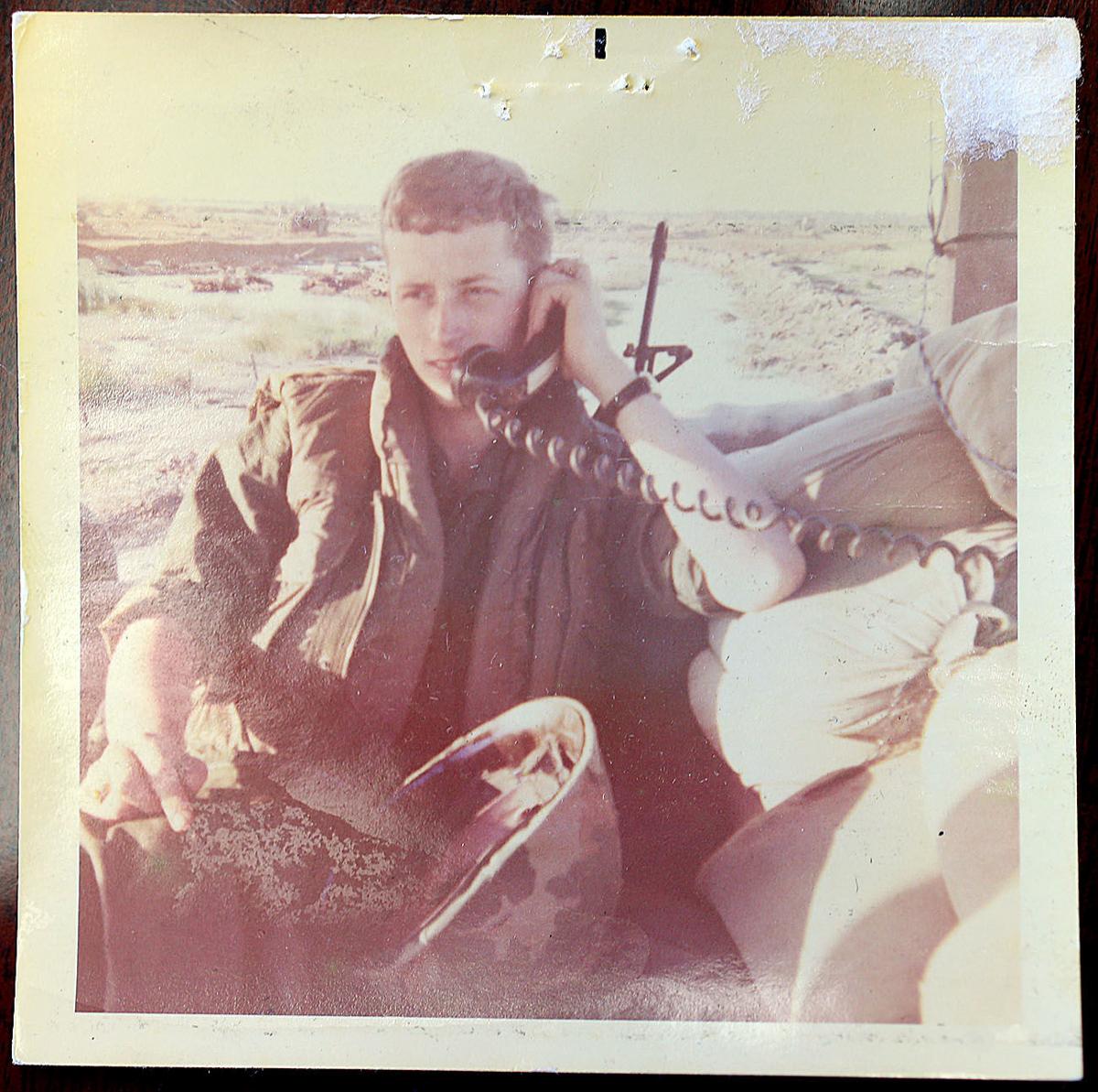 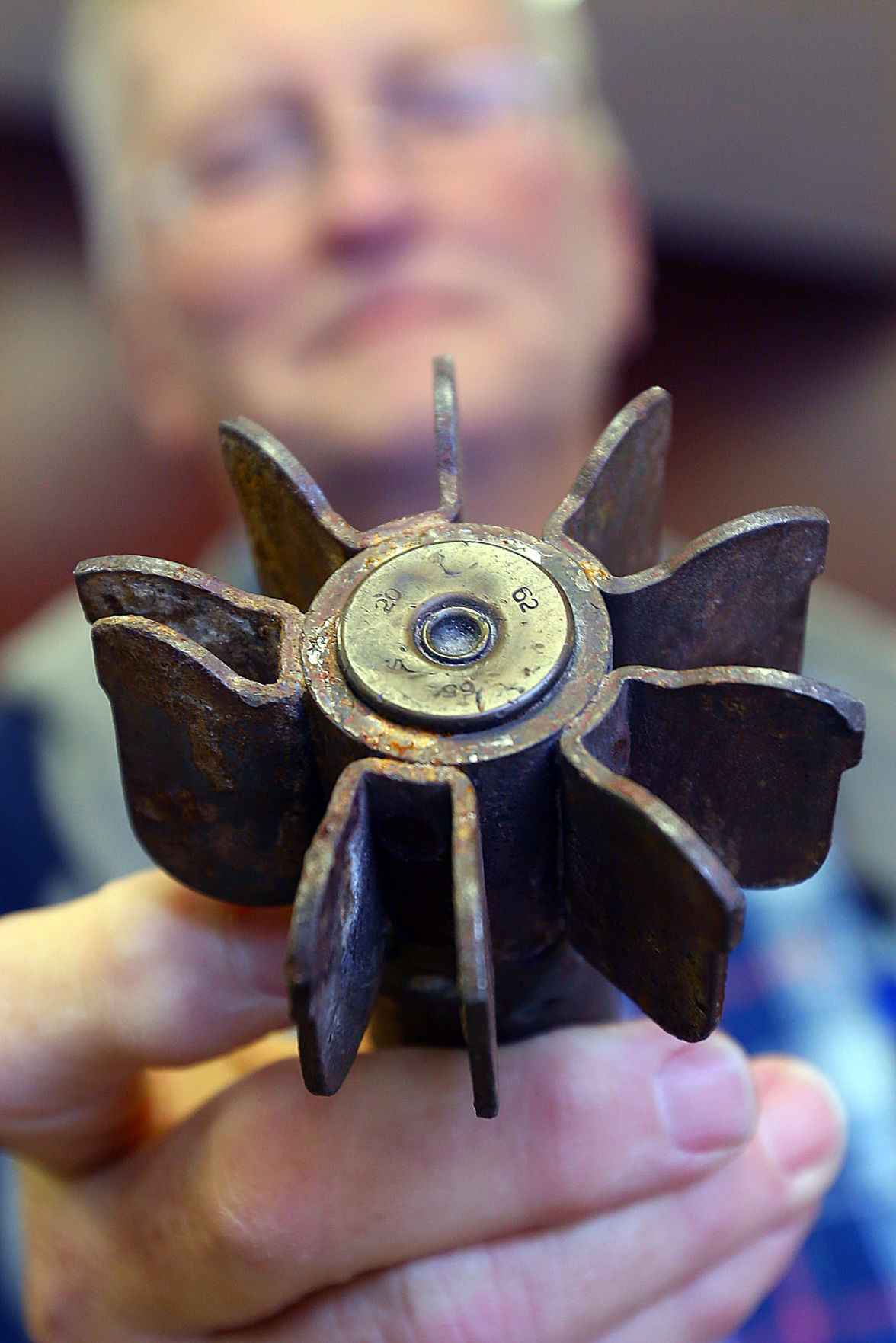 Roger Rayl talks about serving in combat during the Vietnam War on Nov. 8, 2019. One of items he brought back is the tale of a mortar shell. Tim Bath | Kokomo Tribune 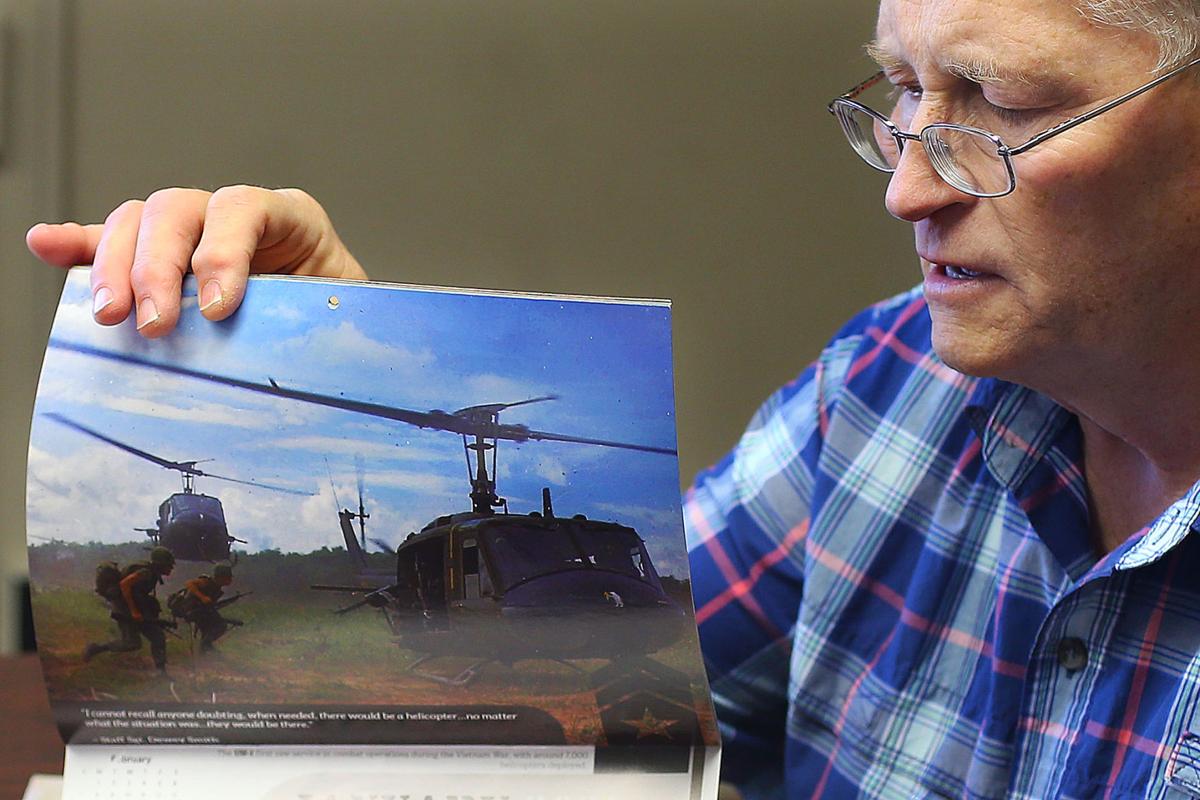 Roger Rayl talks about serving in combat during the Vietnam War on Nov. 8, 2019. This photo shows what it was like for him to be dropped in the jungle by a Huey. Tim Bath | Kokomo Tribune 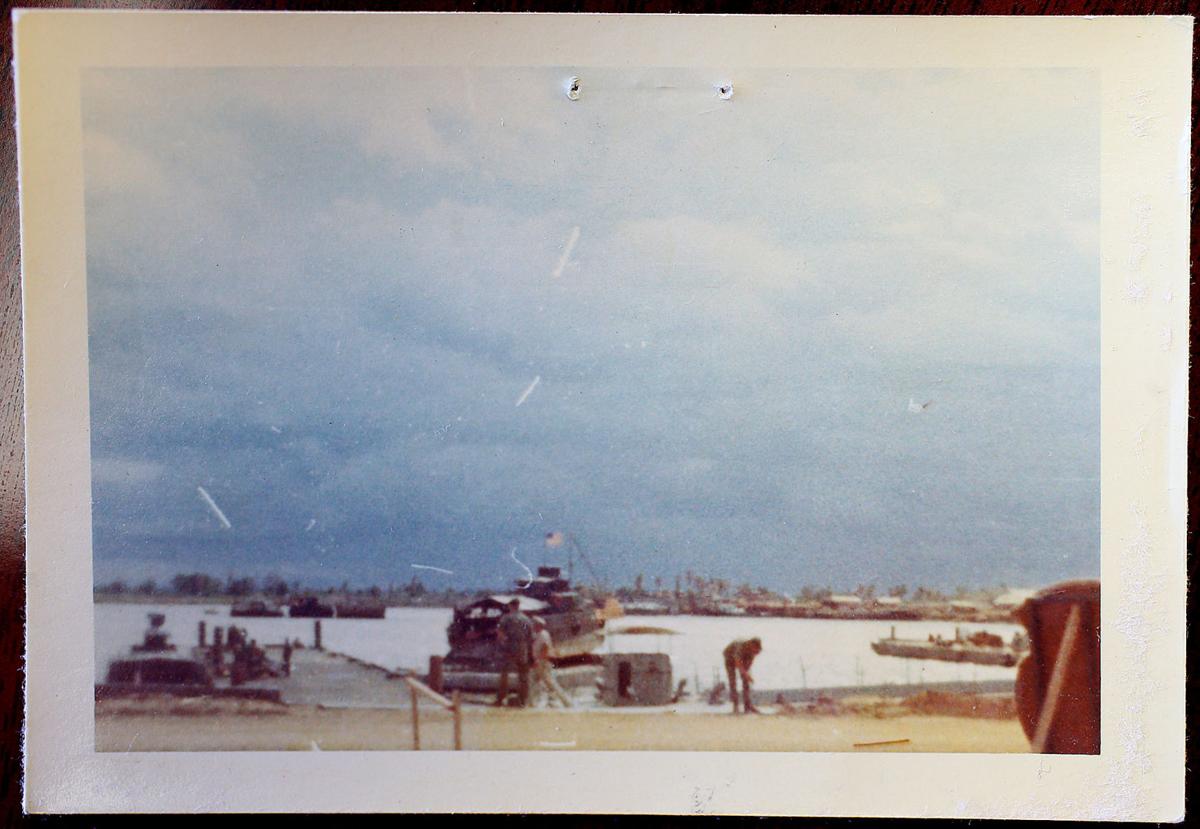 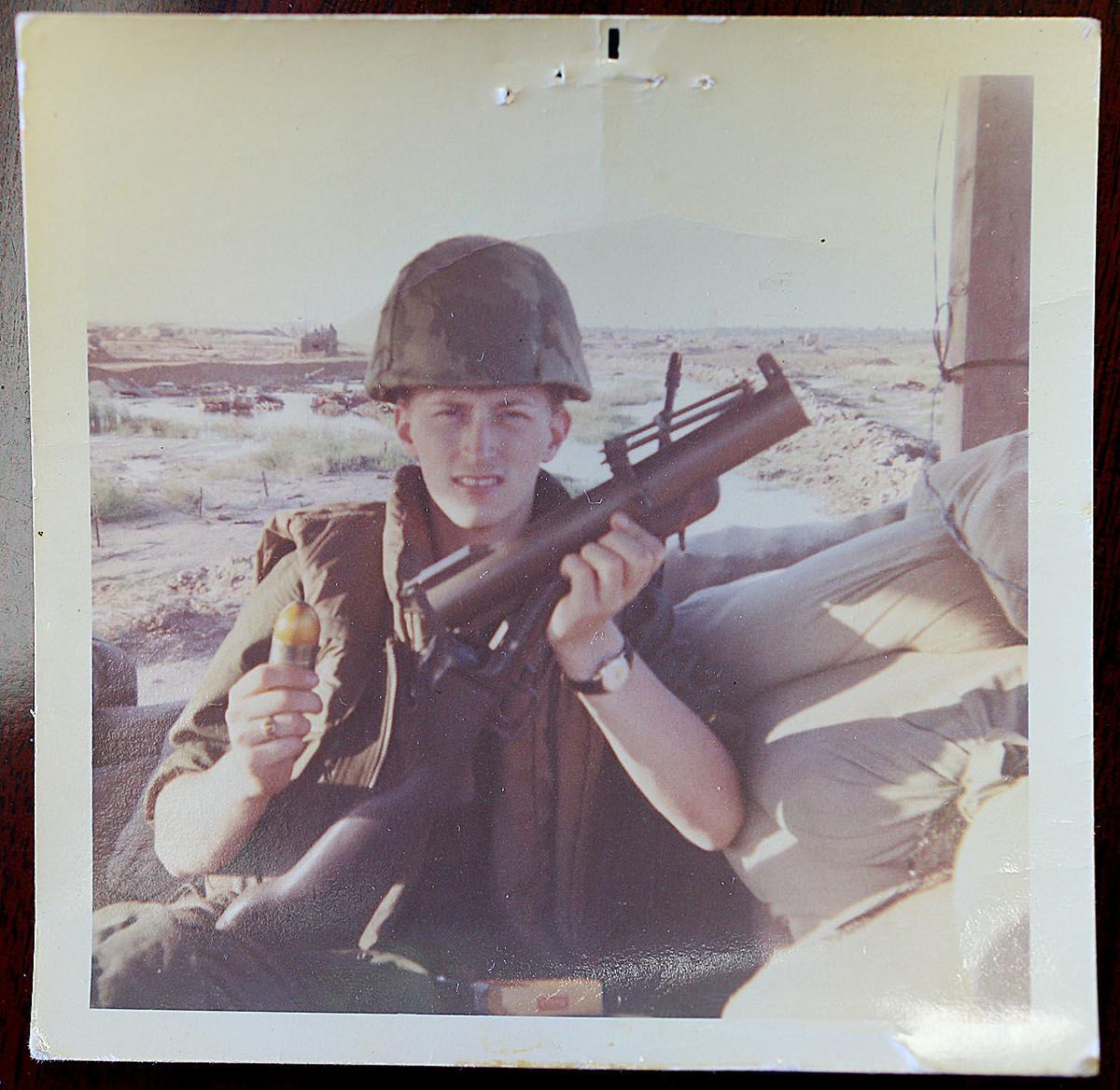 Roger Rayl talks about serving in combat during the Vietnam War on Nov. 8, 2019. As he talked he would show photos such as this one that showed pretty accurately what it was like for him. Tim Bath | Kokomo Tribune

Roger Rayl talks about serving in combat during the Vietnam War on Nov. 8, 2019. One of items he brought back is the tale of a mortar shell. Tim Bath | Kokomo Tribune

Roger Rayl talks about serving in combat during the Vietnam War on Nov. 8, 2019. This photo shows what it was like for him to be dropped in the jungle by a Huey. Tim Bath | Kokomo Tribune

Kokomo resident Roger Rayl still has a mortar fin that sits on a piece of furniture at his home. He also has a small piece of shrapnel in his left knee, just little reminders of his two-year duty to Uncle Sam over 50 years ago.

Barely old enough to vote and still too young to legally drink, Rayl was like thousands of men of his generation, drafted to fight off the Viet Cong in a land half a world away from the comforts of home.

A sergeant in the U.S. Army’s 9th Infantry Division during the Vietnam War, Rayl said he knew and understood the mission assigned to him as he left America for Southeast Asia in January 1968, even if that meant making the ultimate sacrifice.

“We knew we were there to try to stop Communism,” he said. “We knew that we found mass graves in Laos, Cambodia and no doubt in Vietnam, where when the Communists came in, they just killed anything that had anything to do with America.”

But even though Rayl said he understood the mission, war is still hell, and the young man was right in the middle of it.

Rayl and the rest of his 12-man platoon — a hodgepodge of strangers from different walks of life and different areas of the country — landed in the rivers and rice fields that lined the Mekong Delta area of South Vietnam 10 days before the start of the Tet Offensive.

The Tet Offensive was a coordinated series of attacks by the North Vietnamese on more than 100 areas in South Vietnam in January 1968. By the end of that February, according to the New York Times archives, the U.S. military casualty rate in Vietnam was reaching 500 per week.

“That’s when the Communists made the biggest push in the whole war,” Rayl said, referring to the Vietnamese tactics. “… They lost thousands of people too, but they were trying to break our will.”

For the first couple of months during their “search and destroy” missions, the 9th Infantry Division would take helicopters to their dropping-off points, Rayl said. Later on in his deployment, as the troops advanced, the platoon would piggyback atop the U.S. Navy’s Patrol Fast Craft — commonly referred to as Swift Boats.

“Swift Boats were the gun boats the Navy used,” he said. “The Navy would roll us out for a day or two on them, and then they’d come back and pick us up. There were two or three styles of them, and you could usually get six to eight guys in the bottom of one.”

And once the Swift Boats dropped the young men off, there was really no telling what was going to happen next, Rayl noted.

“It was pretty scary,” Rayl said, “and it made you grow up pretty fast. I was always a Christian, but I became a deeper Christian [through war]. When you think that things aren’t going to work out, and you’re going to have a second coming, you really do reach out to God. There were a few times where the odds were just really against us, and so I just did a lot of praying.”

Rayl then took a few moments to talk about one of those rough experiences during his deployment in Vietnam, claiming that it was the worst time of his life.

For 28 straight days during the Tet Offensive, the Viet Cong hurled mortar and rocket fire at Rayl’s platoon, he said, some coming so close that the 20-year-old didn’t know if he was going to live or die.

“They would loft it in during the night,” he noted. “There was a stretch in there that I had zero sleep for two-and-a-half days. Not only do you feel numb, but you just feel sick. It just went on and on, but we couldn’t let up because the [stuff] kept coming in.”

Rayl also remembered times when mortars would blow up just feet away, causing shrapnel to fly in his direction.

And then there was always the weather to deal with too, Rayl said, which was mostly hot, humid and rainy.

“It was the monsoon season. So I just laugh when people here run because they don’t want to get wet. Try being in it for three months,” he joked.

Rayl left Vietnam a year to the date he arrived, but he said it felt much longer.

War will do that to you, he noted.

Rayl smiled and said he didn’t kiss the ground when he returned home on that cool January day, but he was extremely grateful he made it home at all. After all, Rayl noted, a lot of men didn’t have that same opportunity.

After the war, Rayl came back home to Indiana, settled down, raised a family and sold insurance for Farm Bureau for 40 years.

And though he does still have that piece of shrapnel in his knee, Rayl said that’s not all he took from Vietnam.

“Hearing a loud bang, I would jump,” he said, referring to the immediate days following his return home. “And it probably lasted a month or two. If a car backfired, I’m sure my folks never said anything, but I’m sure they saw me jump more than once. Me, I’d just smile and then go on. … Everybody’s different, and you go through different heartaches and problems.”

There are also the occasional 50-year-old nightmares that still haunt him, the sound of mortar fire and the yelling of his comrades that periodically shake him awake at night, Rayl noted.

“I usually can’t remember the details of those dreams,” he said, “and I’m thankful for that.”

Rayl also suffers from several of the same health ailments that have affected thousands of others who also fought in the Vietnam War, including heart issues that require constant care.

But while he said his years of service were challenging, Rayl also noted that the military taught him a lot of life lessons along the way.

“We’re only here for a little while, and you have to try the best you can in life,” he said. “I see that in today’s world that so many people just don’t seem to even try. You have to be the best you can be, and I think the military tries to instill that in you. They strive to make you have pride in yourself.

“I think spirituality is what got me through,” he continued. “That helped me. After all, you don’t see too many atheists in a foxhole.”