Miami Co takes last stand against J-turns on US 31

The number of reported shots fired has more than tripled from May 1-Sept. 30 on the northeast side of Kokomo, compared to the same time period in 2018.

There were 48 reports of shots fired in that period in the area of the Carver Community Center and Studebaker Park, as well as in the vicinity of East Mulberry, East Jefferson, East Jackson and East Taylor streets. 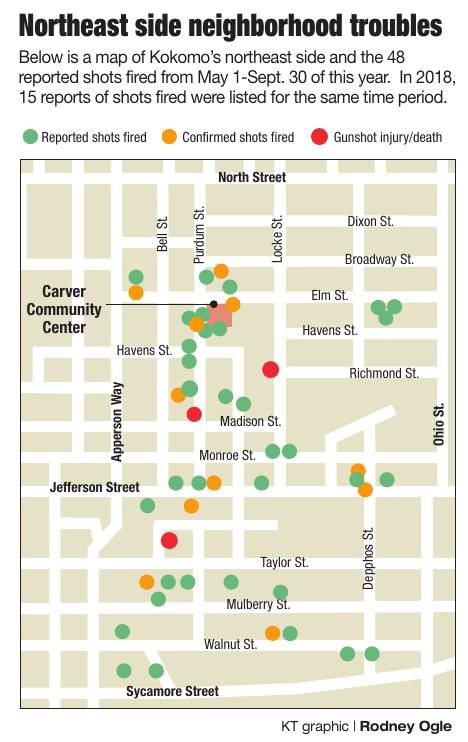 There were 15 reports of shots fired in those same areas in the same time span in 2018.

Now, an organization with the mission of reducing violence and homicide through direct engagement in the community is set to roll out in Kokomo over the next few weeks.

During a community forum on safety and gun violence at Mt. Pisgah Missionary Baptist Church on Monday night, local church leaders announced that Kokomo is set to soon be host to a TenPoint Coalition, a national nonprofit that is already in dozens of cities across the country, including Indianapolis and Fort Wayne.

Bishop Charles Glenn, pastor of Fountain of Life Worship Center and appointed leader of TenPoint in Kokomo, said the coalition will eventually focus on three key areas on the northeast side of the city, though there are two locations they are honing in on right away.

According to Angela Daniels with the Kokomo Police Department, of those 2019 numbers, 10 were actual cases where officers found evidence of a shooting incident, such as shell casings or bullet holes. And three of those had a victim attached to the incident — such as the September death of Kokomo resident Dayshon Sanders, 19, whose body was found in the 400 block of North Bell Street.

The TenPoint Coalition works in partnership with the Indiana Attorney General’s Office and is made up of men and women who focus on a “boots on the ground” approach when it comes to curbing gun violence, its website states. That’s mainly done through public safety walks conducted by coalition teams, which occur several times a week in regular intervals in key “high crime” neighborhoods throughout a city.

The idea to bring the coalition to Kokomo is a long time in the making, Mt. Pisgah Pastor Lonnie Anderson said.

“It’s really a proactive step in trying to unify the city,” he said. “It sort of came from the African-American pastors, and it really moved from there. We just need to be proactive and unite and become one voice as we speak against the violence and unrest in our community.

“This is more than just about marching against violence,” he continued. “Of course we want to see a reduction in the shootings and in the murders, but not only that, we want to instill hope and instill a sense of direction. It’s about assisting these young men, and women, who feel like they don’t have hope, and showing them that there is a group of people in this city that are concerned about them.”

Anderson and Glenn said that Kokomo’s TenPoint Coalition will be mirrored after the one that has been at work in downtown Indianapolis for almost two decades now. Glenn also noted that coalition officials in Indianapolis will help train and mentor local coalition leaders before the program takes full effect in the city.

“This training that we’ll go through, it will be to simply show us how not to confront but just to meet people where they’re at,” Glenn said. “It’s about how we should interact and talk with them. It gives us the experience and expertise from what they’ve already done [in Indianapolis] so that we can glean from them, learn from their experiences and utilize that in Kokomo.”

And though Kokomo’s TenPoint Coalition will be made up of people from all walks of life, Anderson and Glenn pointed out that the local churches plan on continuing to take a very active role in the process.

“Despite what some claim to be apathy from the pulpits from the churches in the city, I don’t know of one pastor that’s not concerned about the violence,” Anderson said. “But it’s also too large for one church. It’s going to take the people of God and the community and a collaborative effort between educators, the judicial system, law enforcement, the churches and so forth.”

Because, as Anderson pointed out, organizations like the TenPoint Coalition are more than just about marching against violence. It’s about physically changing lives.

“There’s a lot I’d like to see as an end result to starting this coalition here in Kokomo,” he said. “I really want to connect to people. I really want to form relationships with some of these men or women who seem to be driven by thoughts of violence. If you read the Scriptures, Jesus did most of his ministry outside of these walls. I think that we gather to worship, but we scatter to serve.

“And I want us to be able to really create a climate and culture in this community that includes everybody,” he said. “It’s about getting in there, doing some groundwork, rolling up our sleeves and getting busy.”

An anti-violence march will be held at 11 a.m. Oct. 26 starting at City Hall and ending at Studebaker Park.

See page A3 for a map of the northeast side and where shots fired were reported.

Seven-year-old Key’Aire Wesley empathically held the microphone close to his face and began to shout.