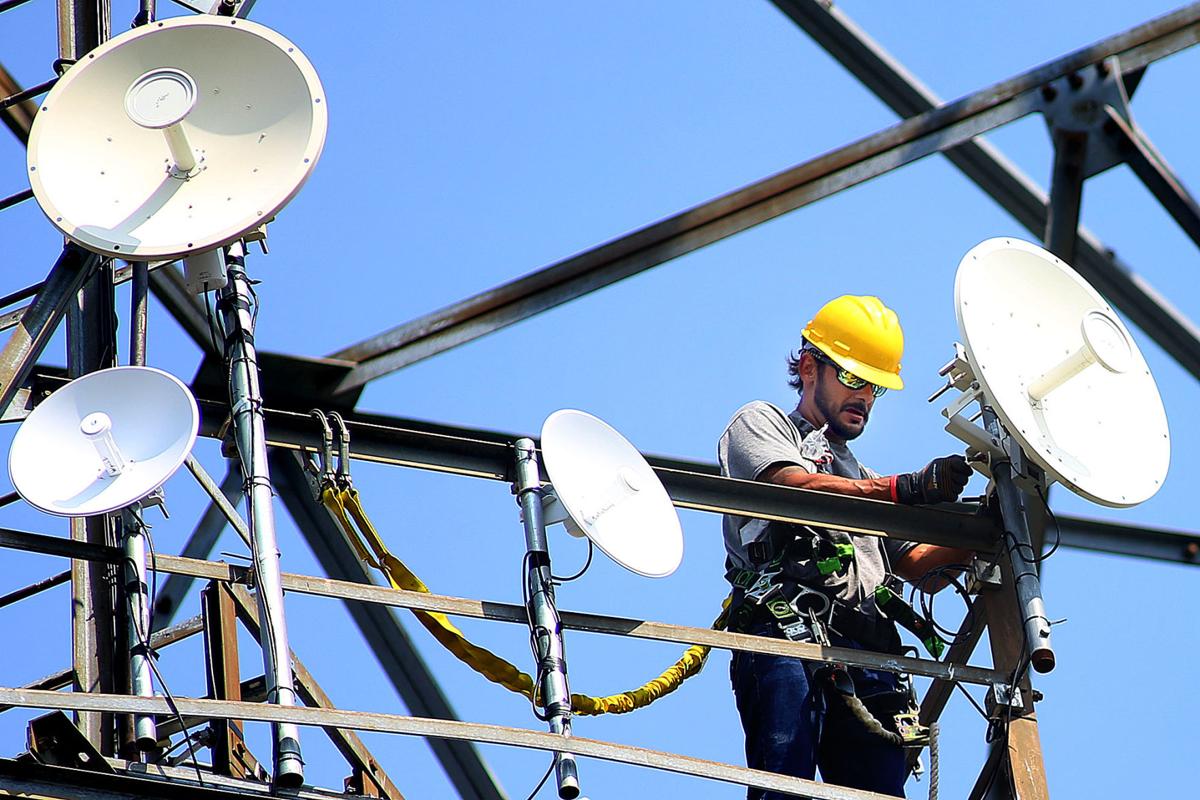 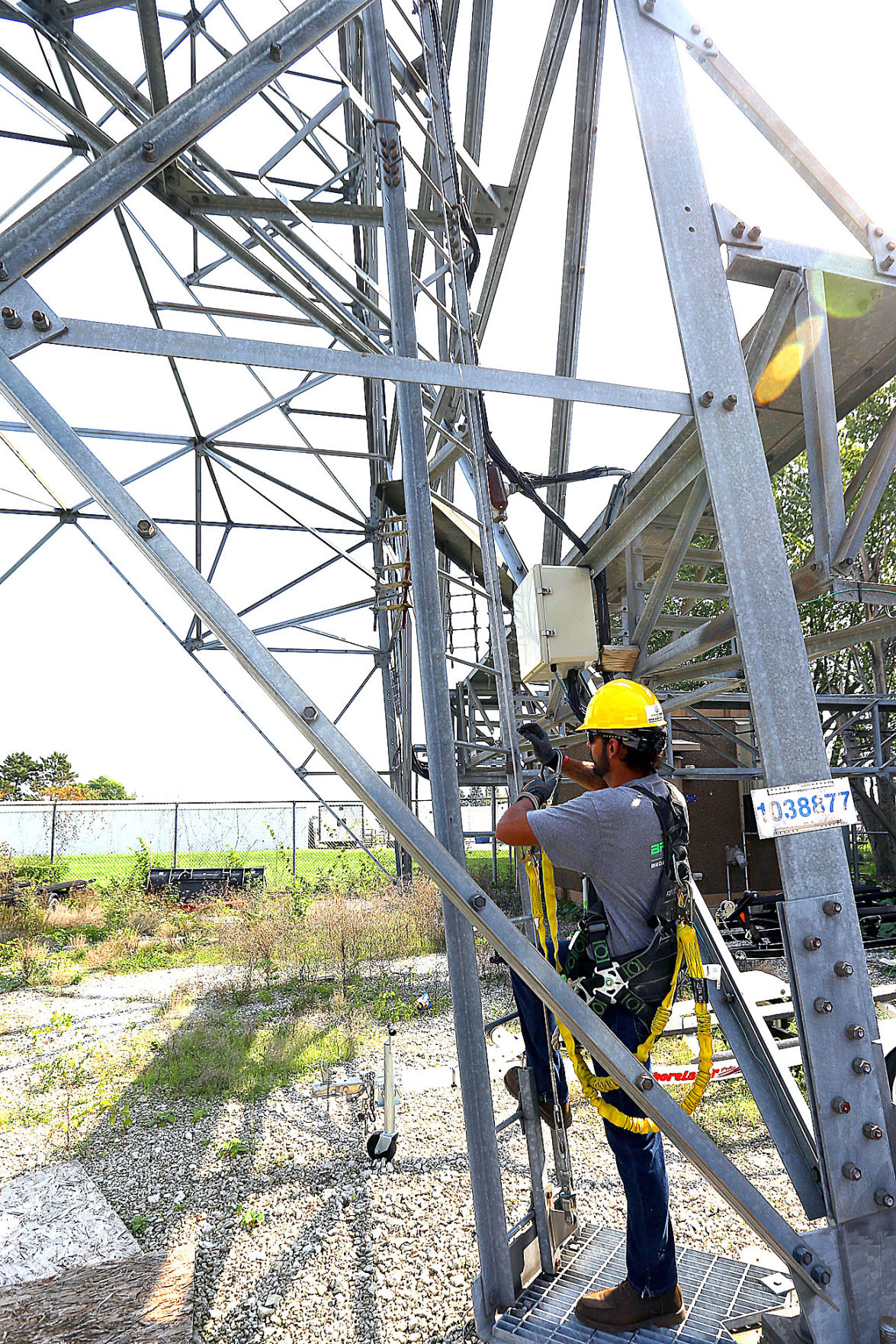 Zac Baldock, an 18-year-old homeschooler and aspiring entrepreneur, has goals similar to many his age – to record podcasts, to create online content and, even, to create his own production company.

There’s only one problem. His Internet is stuck in the dark ages.

Baldock, who lives with his grandmother in rural Howard County and takes online classes, finds himself at an impasse that most of his peers left behind long ago.

Working with fixed wireless internet, and two connections from two different providers in an attempt to piece together a serviceable connection, Baldock says the situation “has mainly just hurt my professional aspirations.”

It’s a hurdle faced by a surprising amount of rural Hoosiers, which has emerged onto the scene as a priority for Indiana’s political and business leaders.

Because for longtime farmers to teenagers like Baldock, the internet is no longer a luxury – it’s a necessity.

“We don’t have a ‘name brand’ internet company like AT&T or Xfinity,” he explained. “We have contacted both multiple times on the potential of them laying cable to our house to provide a solid Internet solution and all times we were told it’s not possible even though Xfinity has customers on our road.

“I’ve always wanted to make content and put it on the internet but didn’t have the means or equipment to do so until recently, but being in a rural environment has squashed the opportunity further.”

BroadbandNow, a comparison and research website, found that while roughly one-in-10 Howard County residents are without 100-mbps-speed (megabits per second) Internet, the issue is demonstrably worse in Tipton and Miami counties, where 30 percent and nearly 40 percent of residents, respectively, are without access to 100-mbps speeds.

Overall, a statewide analysis found 93,000 Hoosiers live in near “internet darkness,” according to a study conducted by Purdue University agricultural economists.

“I would like to see serious grants and projects started by the government to lay cable and fiber,” said Baldock. “We all have electricity; it was decided that we can’t live without it and that it was necessary, so the government connected all houses.

"We are at that point with the internet. It will only serve to stimulate economic growth and create more opportunities. It's a no-brainer to me. ... I have quite literally seen the world pass us all by."

Now, there’s a new state program that aims to do just that and bridge the digital divide that has plagued rural Indiana since the dawn of the internet.

The state announced earlier this month that it will commit $100 million to bringing affordable high-speed fiber optic broadband access to un-served and under-served rural areas of the state, part of a $1 billion infrastructure plan introduced by Gov. Eric Holcomb.

“Access to affordable high-speed internet brings countless opportunities to these areas, and [the Indiana Department of Transportation] will work with local entities, providers and stakeholders to develop grant programs that will complete the final lines of connectivity to Hoosier homes,” said Indiana Lt. Gov. Suzanne Crouch during a visit to Kokomo in early September.

He said state officials are currently in the middle of talking to community leaders and internet providers across the state to determine how best to distribute the new grant program so that it creates the biggest impact in rural Indiana.

Improved trails, more international flights out of Indianapolis and internet access in rural…

The state specifically wants to help fund new infrastructure that will allow residents to access 100-mbps-download speeds and 10-mbs-upload speeds. Those speeds can be reached through laying down fiber-optic lines. There is also some wireless technology which could accommodate those speeds.

Although 100-mbps speed is faster than an average broadband user needs, the goal is to ensure the money spent now in installing the infrastructure will be sufficient for Internet needs well into the future.

“That’s the kind of high-speed internet that is somewhat future proof,” Rudd said. “We don’t want it to be outdated by the time it’s installed. We want it to accommodate the needs of Hoosiers for years to come.”

The upcoming grant program comes on the heels of another huge influx of money dedicated to getting solid broadband to rural Indiana.

The Federal Communications Commission last month awarded more than $29 million in funding over the next 10 years to increase broadband speeds for 24,530 locations throughout the state. Six internet providers, including one located in Rochester that serves parts of Miami County, were selected for the funding.

The Indiana Office of Community and Rural Affairs has also launched a new plan to help communities understand their current broadband conditions and needs and create a long-term plan to expand broadband in their areas. Five communities will initially be selected for the pilot program and receive at least $50,000.

Now, rural residents like Baldock and organizations such as Indiana Farm Bureau hope high-speed broadband access will soon be headed to those experiencing the worst of internet darkness.

That’s the same hope shared by rural school districts, where students may not have solid broadband access at home to complete homework or other assignments.

Districts such as Eastern Howard School Corporation have adapted with measures that include ensuring homework assigned on student iPads can be done without Internet access “and still be turned in in a timely manner,” said Superintendent Dr. Keith Richie.

“It can be an issue for some of our students,” he said. “In some areas in our district it is not as dependable as what our students see in the schools … Some of the main providers just don’t cover all of the areas, but it is getting better.”

Despite the improvement, Richie said the Greentown Public Library still works with the school to offer hours that allow students seeking internet access to stay after school or utilize evening hours to complete work.

Rudd, the state’s broadband director, said a lack of rural broadband is also contributing to declining enrollment in rural school districts. He said many parents with children won’t move to those areas because of bad internet speeds.

“If parents are looking at a community and it doesn’t have broadband, a lot of them won’t move there and bring school their kids that could enroll in the school,” he said.

Farmers, specifically, represent a large swath of the rural population that struggle to find reliable, high-speed internet and could reap major benefits from broadband expansion.

As noted in Purdue’s extensive study, farmers would be helped through enhanced “productivity and profitability by making it easier to communicate with suppliers and market outlets.” The study also noted it would be easier to access farming and weather information that could impact decisions and lead to a general improvement in farm management practices.

Locally, the breadth of the problem is being studied at Indiana University Kokomo, said M. Abdullah Canbaz, an assistant professor of computer science.

“How we can make this accessibility better – this is a big research answer people are trying to come up with,” said Canbaz, highlighting 5G networks, an ambitious internet-by-balloon plan created by Google and even an idea from Elon Musk that would involve more than 4,000 satellites providing broadband internet access across Earth.

He said that while the research is still in a nascent phase, it’s become clear that many rural residents are relying on antiquated technology, a problem which brings myriad security concerns along with its slow speeds.

The further homes get from large cities, the more likely they will have dial-up networks.

“When you go far, your distance changes everything; that is a big game-changer,” Canbaz said, noting low-speed internet even prohibits rural residents from using smart devices that can limit typical household costs.

Often, rural residents like Baldock, living in places with a lack of population density, are left asking internet providers to deploy fiber optic wires all the way to their home, an expensive request that is almost never done.

But one local internet provider is trying to do just that, and company leaders say gaining access to state funding could allow them to expand high-speed service to the area faster than ever.

Broadway Broadband, an internet company based at Grissom Aeroplex, has been supplying broadband Internet to Howard, Miami and Cass counties for years.

But those wireless satellites aren’t capable of sending out 100-mbps download speeds. The company currently offers customers 25-mbps speeds as part of their fastest option.

Now, that’s changing. Page said the company is undertaking a $600,000 project to install fiber-optic lines to Eagle’s Pointe, a massive subdivision near Grissom Air Reserve Base that makes up the second largest population density in Miami County.

When the project is completed next year, residents there will be able to access Internet speeds up to 250-mbps.

Page said the project makes sense at Eagle’s Pointe and the surrounding area, since more than 3,600 people live there. He said the company would like to provide those speeds to all their customers, but that would require spending millions of dollars laying hundreds of miles of fiber-optic line over the next decade.

But with an infusion of grant money from the state, it’s the kind of project that might just be possible, Page said. The company has reached out to state officials about the program, and hopes to apply for grant funding once it becomes available.

“That will speed our process along so much so we can get out and reach more people faster than we ever could on our own,” he said. “It’d be huge. We could literally start right now going further and faster.”

“Companies are pouring hundreds of millions of dollars into Indiana broadband,” he said. “We think that’s critical. These state funds will hopefully help those same companies who are investing to reach even more people and at a quicker pace.”

And how fast high-speed internet reaches rural Indiana will have a direct impact on the economic development potential it could produce.

The Purdue study found that each dollar invested in broadband access returns nearly $4 to the economy. Investments into rural broadband extensions are projected to lead to nearly $12 billion in net economic benefits over a 20-year period.

“Those businesses that operate in rural Indiana have some of the same demands of businesses operating in downtown Indianapolis,” Rudd said. “The governor sees rural Indiana as the next great economic development frontier, and broadband is an essential part of that.”

Indiana’s largest privately-held telecom says it has launched a $2.7 million project that will bring increased internet services to rural resi…