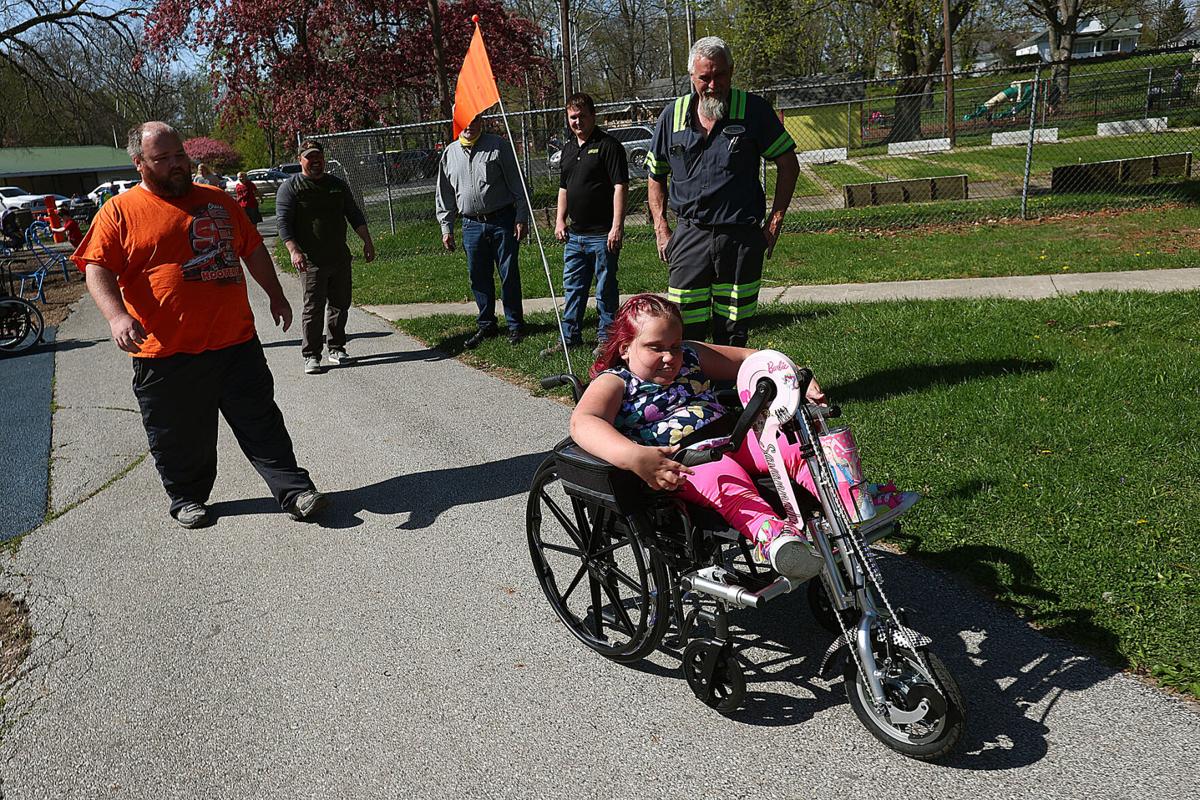 Savannah Healton takes off Monday on her new bike after it was donated by Chris Sutton of Sutton Towing and Warren Sims of All American Auto Service. Savannah, who has spina bifida and Caudal Regression Syndrome, uses a wheelchair for mobility. 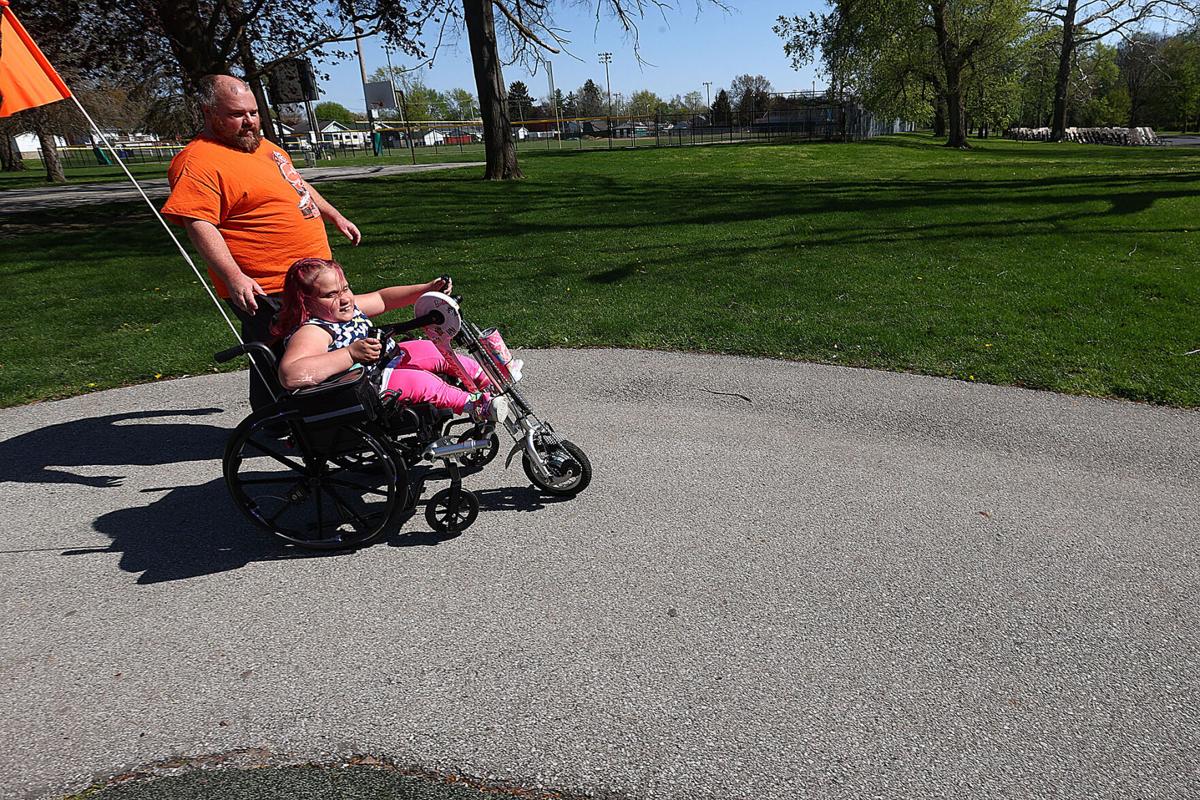 Savannah Healton cruises through Highland Park in Kokomo after it was donated to her Monday by Chris Sutton of Sutton Towing and Warren Sims of All American Auto Service. 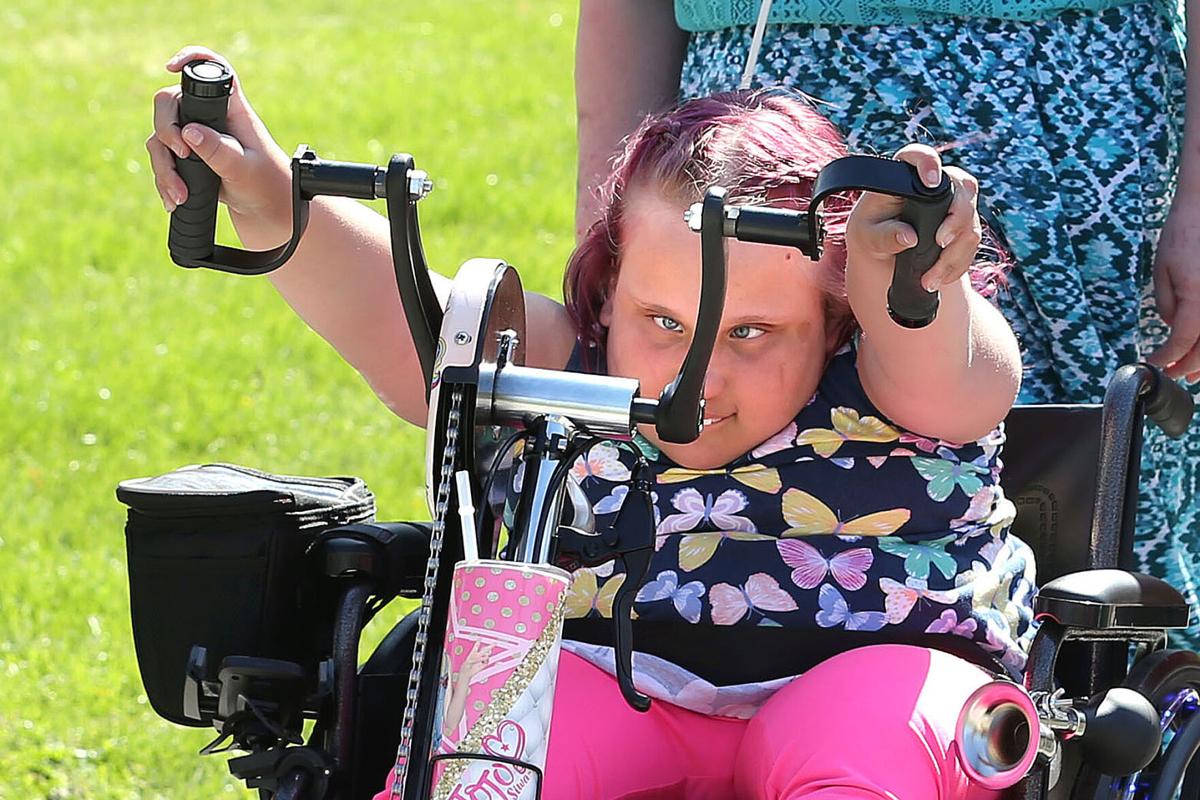 Savannah Healton cruises on her bike through Highland Park in Kokomo after it was donated to her Monday by Chris Sutton of Sutton Towing and Warren Sims of All American Auto Service.

Savannah Healton takes off Monday on her new bike after it was donated by Chris Sutton of Sutton Towing and Warren Sims of All American Auto Service. Savannah, who has spina bifida and Caudal Regression Syndrome, uses a wheelchair for mobility.

Savannah Healton cruises through Highland Park in Kokomo after it was donated to her Monday by Chris Sutton of Sutton Towing and Warren Sims of All American Auto Service.

Savannah Healton cruises on her bike through Highland Park in Kokomo after it was donated to her Monday by Chris Sutton of Sutton Towing and Warren Sims of All American Auto Service.

Savannah Healton took advantage of the early spring weather Monday to ride her bike for the second time. She was riding down the path beside the playground at Highland Park in Kokomo, gathering speed, with her parents in pace beside her and behind her, making sure she didn’t veer off the path.

But this milestone childhood experience was one that her parents, Josh Healton and Chanda Burton, didn’t expect their daughter to ever have.

Savannah, who has spina bifida and Caudal Regression Syndrome, uses a wheelchair for mobility.

Riding a bike, short of a miracle, likely wasn’t in her future.

Savannah is in third grade at Maconaquah Elementary School. She has purple hair — “We’re both hooked,” Chanda said, pointing to her matching locks — and a big smile. She loves Jojo Siwa, and wears sparkly pink shoes with rainbow ties.

The 9-year-old also is a Brownie in Girl Scout Troop 404, Josh said. She likes reading; watching “The Descendants,” a Disney TV show and movie; and watching YouTube videos. Chanda said Savannah doesn’t act or think like she has any limitations: if she wants to do it, she does it.

But Savannah wasn’t feeling very chatty Monday with her new bike at her fingertips. She was much more interested in putting tire to pavement. The entire crew of community helpers and her parents, Josh, Chanda and stepfather, William Burton, followed her.

There were very few dry eyes in the group.

Chanda had made a post on Facebook asking for recommendations where a hand-pushed bicycle that can be attached to a wheelchair could be made. Rather than providing recommendations though, Chris Sutton of Sutton Towing and Warren Sims of All American Auto Service, purchased the bike. In its own way, Chanda said, their act was a miracle.

It was quite a mission to get Savannah’s bike, Chanda said. First, she tried ordering one online, but when it arrived, it was more like a hand-pedal go-kart, but Savannah’s legs were too long for the model. Every time she pedaled, it would scrape her legs, so they sent it back.

“I originally made a post asking if anyone knew where to get a handicap bike custom-made,” she said.

Chanda had never met Chris or Warren before, but they offered to help.

“I wasn’t looking for anything free, or anything like that. It took me completely by surprise,” she said. “I was like, ‘Wow, really?’ I could not believe the generosity of them.”

Warren and Chris shrugged it off. They’re passionate about helping the people around them, they said.

“It’s a given, really,” Warren added.

The two men were quick to talk about watching Savannah play, saying that her joy blessed them.

“I’m going to get soft on you,” Chris said, with tears in his eyes.

The pair, both in the auto industry, planned to custom-make the bike attachment themselves. They quickly realized they were out of their depth.

“We’re all businessmen, we’re all busy, but if we can take a few bucks out of our pocket, this is going to make a difference in that little girl’s life,” Warren said, while tearing up. “It’s worth all of it.”

Josh said he’s been “completely floored” by the gift.

“Honestly I’m just blessed that they felt they wanted to do this for us,” he said. “When we (posted) on Facebook, we just wanted information on where to go because we were going to buy one. We were not looking for charity, and these guys stepped up and did much more than they needed to.”

William said the time, thought and energy put into such a valuable gift for his stepdaughter has been remarkable.

The cost of the bike — a Dragonfly by Rio Mobility — was split between Sutton and Warren. It was lost in shipping through a third-party vendor, creating a time crunch on an already-expedited schedule. When Warren called Rio Mobility for help, they sent a new model immediately via overnight shipping.

“I opened the box and it’s not what I ordered, so I called Rio Mobility,” Warren said. “The COO of Rio Mobility was on the phone, and he kind of chuckled. He said, ‘I gave you the next best model.’”

The Dragonfly is made to fit with 99% of mobility chairs, but Savannah’s chair was one of the 1%, which they discovered Sunday. On Monday morning, Moores Home and Health Supply, 608 W. Markland Ave., donated a new chair to Savannah, Warren said.

Chris said it took one phone call to Clifford Signs, who made a custom vinyl wrap in pink, with “Savannah” down the side. One of Warren’s friends, Jennifer Chapman, custom-made a pink water bottle for the cupholder within only a day’s notice.

Warren and Chris made sure to soup up the bike with special attachments as well. It has switch-controlled LED lights around the wheels and one on the front for nighttime riding, a cupholder and a cellphone stand, which Savannah was particularly happy about. Her favorite added feature was a pouch, like a lunch bag, attached to the side of the bike.

“I can put chips in here,” she said. “I can put my phone in here. Mom look, I can put this new water bottle in here.”

The excitement for the bike hasn’t waned, Chanda said Wednesday evening. Savannah spent an hour and a half on the bike Tuesday afternoon, her mother said.

“When she got home from school today, she knew it was going to be raining and she made this sad face,” Chanda said with a laugh. “No, sorry, you can’t go bike in a storm.”

The will to ride her bike in the rain is the same will that has made Savannah such a determined girl, in spite of her circumstances. Chanda found out when she was pregnant with Savannah that the girl had spina bifida, but found out about Caudal Regression Syndrome, a rare neural condition, after she was born.

“The best advice we ever got was from a doctor that said, ‘She’s a baby, take care of her baby needs,’” Chanda said. “And you just kind of learn from there.”

Because of her condition, Savannah has no feeling from her belly button to her toes. Her knees and ankles fixed in place, like bony structures, and cannot be operated on, Chanda said.

The only difficulty Chanda with Savannah is lifting her.

“She’s been a very easy child,” she said. “She’s always been very happy, very sassy. We haven’t had any major issues with her health; she’s been pretty healthy.”

Savannah, thrilled with everything from the bike to the snack pouch, showed off her sassy side when the grown-ups stopped playing for a second to chat. When Savannah got tired of them talking, she released the brake on her bike and started pedaling down the path. Her parents looked on, inspired, but unsurprised, at their daughter’s tenacity.

“She’s shown us time and time again that a chair won’t stop her,” Chanda said. “She’s never been stopped by anything.”

Spina bifida is a birth defect that occurs when the spine and spinal cord don't form properly, according to the Mayo Clinic. This rare disease has less than 200,000 reported cases in the U.S. per year. It can be treated by has no cure.

It's a type of neural tube defect. The neural tube is the structure in a developing embryo that eventually becomes the baby's brain, spinal cord and the tissues that enclose them.

Caudal Regression Syndrome is a broad term for a rare complex disorder characterized by abnormal development of the lower (caudal) end of the spine.

Savannah's spine stops at L4 and does not attach to her pelvis, according to her mother, Chanda Burton.