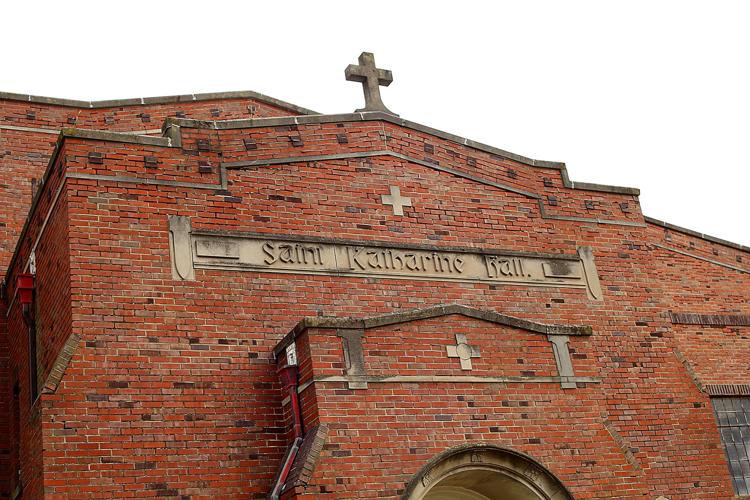 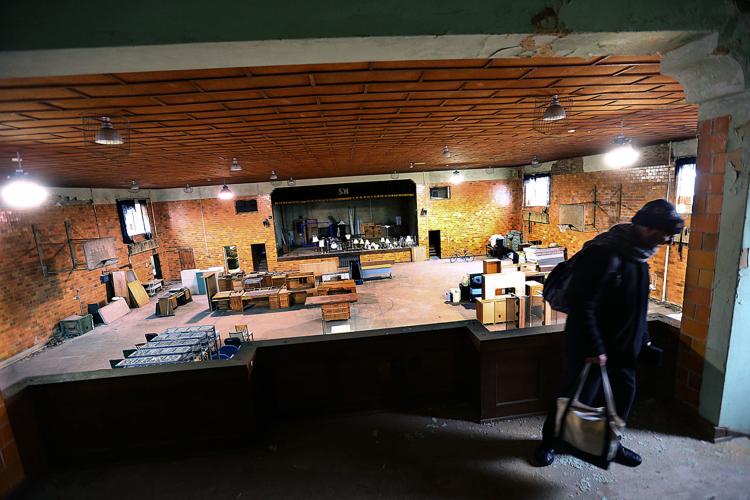 The Saint Katherine Hall, the old recreation center for the now defunct Saint Joseph Academy that was located just north of Tipton, has fallen into disrepair. The Diocese of Lafayette-in-Indiana is looking into whether or not the structure can be saved. 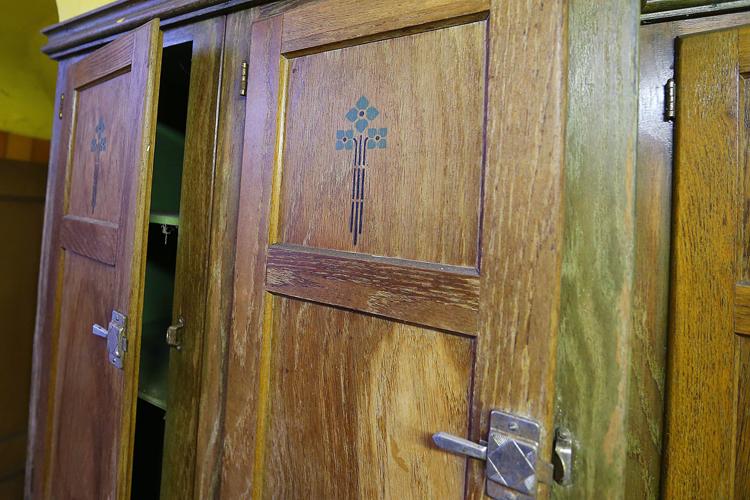 The original hand-painted designs on the cabinets in the kitchen are still intact. The building was built in 1932. 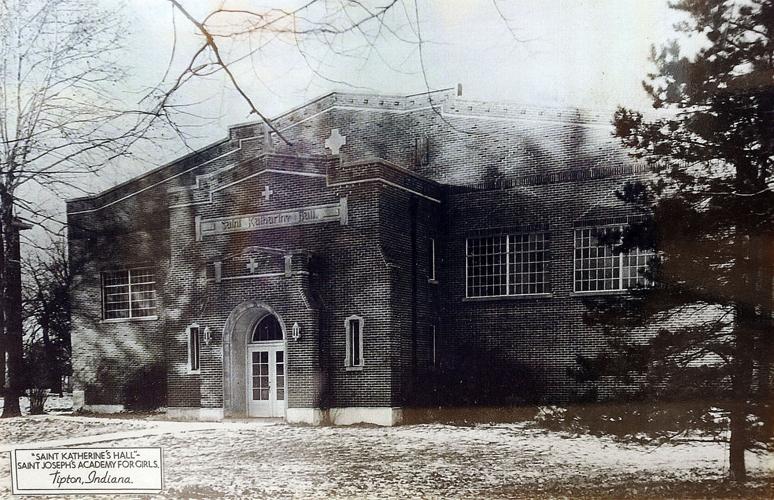 The Saint Katherine Hall, pictured here in this undated photo, was constructed in 1932. 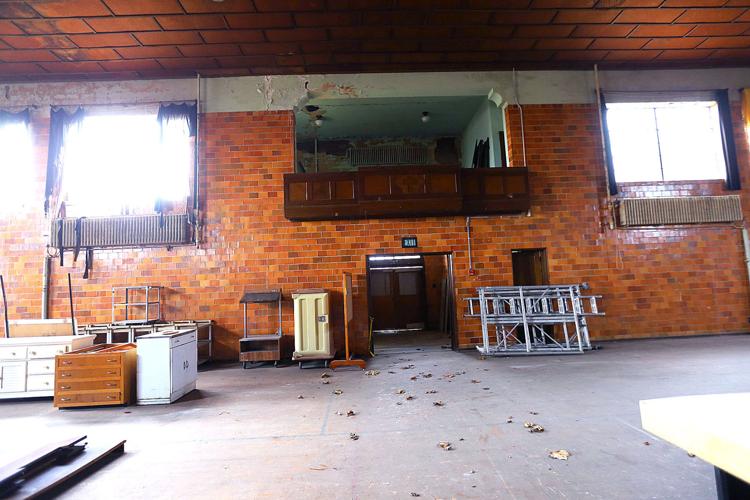 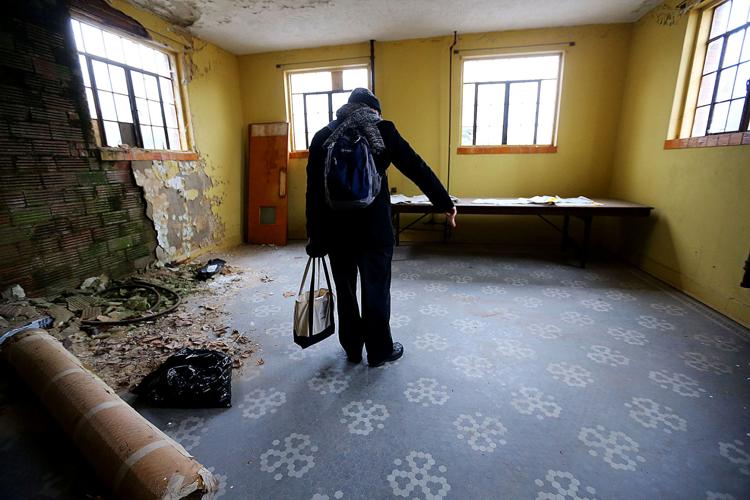 The Saint Katherine Hall, the gymnasium for the Saint Joseph Academy located in Tipton, Indiana, on January 17, 2020. Fr. David Huemmer talks about the intricate detail in the hand layed tile in one of the classrooms. Tim Bath | Kokomo Tribune

The original hand-painted designs on the cabinets in the kitchen are still intact. The building was built in 1932.

The Saint Katherine Hall, the gymnasium for the Saint Joseph Academy located in Tipton, Indiana, on January 17, 2020. Fr. David Huemmer talks about the intricate detail in the hand layed tile in one of the classrooms. Tim Bath | Kokomo Tribune

TIPTON – If the walls at St. Katharine Hall could talk, they’d have a lot of stories to tell.

Today, the red-brick building stands on the grounds of St. Joseph Retreat and Conference Center, located just north of Tipton, as the last architectural remnant of the St. Joseph Academy, the Catholic school that operated from 1904 to 1972.

The building was constructed in 1932 and housed commencement exercises, school parties, alumni dances, plays and even served as a skating rink for the academy girls and the sisters who taught there. After the academy closed, it was used for a migrant daycare until 1991. It’s sat mostly unused since then.

Today, the hall has nearly 90 years of history housed in its walls. But now, those walls are crumbling.

That’s why the Diocese of Lafayette-in-Indiana has launched efforts to stabilize the building and refurbish the structure so it can live on and continue to serve St. Joseph.

Gabby Hlavek, communications manager for the Diocese of Lafayette-in-Indiana, said over the last 20 years, old guttering and partially missing downspouts, along with an uncertain underground drainage system, has caused persistent flooding issues in the basement.

The building also didn’t have any electricity and exhibits significant deterioration in the exterior masonry wall, chimney mortar joints and interior finishes.

In October, two deacons and their wives boarded up the broken windows around the building, Hlavek said. Then, this month, community members donated enough money to allow St. Joseph to replace the gutters and downspouts and run a temporary electrical line to the hall to operate a sump pump in the basement.

Now, church leaders are deciding what to do next.

“All of these efforts are taking place to protect the building while the Diocese of Lafayette-in-Indiana evaluates the next steps,” Hlavek said in an email.

She said staff from St. Joseph’s, the diocese and community members are all currently developing a master plan, and a business plan for the retreat center, and the future of St. Katharine Hall is a part of the discussions of that committee.

If St. Katharine Hall can be refurbished, it would provide a large space for meetings and retreats, as well as indoor recreation space for youth retreats, Hlavek said.

The red-brick building trimmed with Bedford limestone contains a regulation-sized basketball court with bleachers for 500 spectators and locker rooms, a 30-by-18-foot stage, and a balcony for a “moving picture machine.” It also has space dedicated for the domestic science classes with a kitchen, model dining room, and a large sewing room.

Arnold said the hall was built during the lean years of the Great Depression to replace an old assembly hall at the academy, which had become inadequate to meet the needs of the school due to increasing enrollment and expanding curriculum.

Groundbreaking took place March 1, 1932, and opened for school use on Sept. 6. Students from the class of 1933 were the first to hold commencement exercises inside.

After St. Joseph Academy closed in 1972, and there were fewer novices for the convent, the academy building was razed in 1978 followed by the convent in 1982, leaving St. Katharine Hall as the last vestige of the school.

The building was named in honor of St. Catherine of Sienna, patron of Sister M. Katharine Bradley, who served as Superior and as a member of the Community Council for a number of years. Arnold said Sister Katharine is remembered as a competent and enthusiastic teacher in Elwood, Kokomo, Marion and at the St. Joseph Academy.

“She took a great interest in the education of the Junior Sisters of the Community and was instrumental in organizing the teachers’ training school,” Arnold said in a story posted on St. Joseph’s website. “St. Katharine Hall stands as a monument of her dedication to Catholic education.”

And if Diocese of Lafayette-in-Indiana has its way, it will continue to stand long into the future.

Hlavek said the building is currently being used for storage, but if it’s refurbished, it will become an integral part of the St. Joseph campus.

The Sisters of St. Joseph operated that campus as a both a senior living facility and a conference center until the motherhouse closed on March 27, 2013, when only 14 sisters remained. The property sat dormant until the Diocese of Lafayette-in-Indiana purchase in 2016 and transformed it into a retreat and conference center.

Anyone who would like to learn more about the effort to renovate the St. Katharine Hall should contact Fr. David Huemmer at 765-551-9585. Donations to Saint Joseph Retreat and Conference Center can be made by calling Mike MacNulty, director of stewardship and development at the Diocese of Lafayette-in-Indiana at 765-742-7000.