The open house for the Locomotive Solar project saw a small but steady stream of visitors Tuesday at the Co-Alliance Community Building at the Howard County 4-H Fairgrounds. 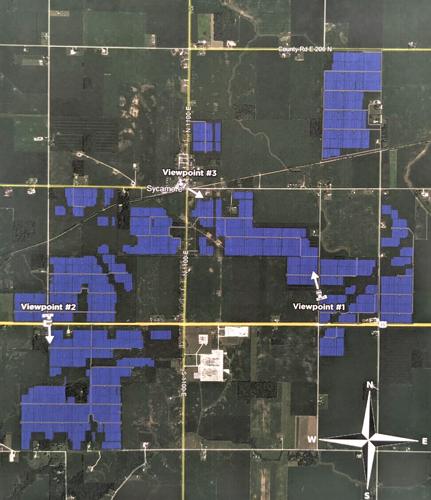 The full project area of the planned Locomotive Solar solar farm is around 1,700 acres, though the panels themselves will take up a fraction of that space.

The open house for the Locomotive Solar project saw a small but steady stream of visitors Tuesday at the Co-Alliance Community Building at the Howard County 4-H Fairgrounds.

The full project area of the planned Locomotive Solar solar farm is around 1,700 acres, though the panels themselves will take up a fraction of that space.

The open house, held at the Co-Alliance Community Building at the Howard County 4-H Fairgrounds from 3 to 7 p.m., provided a few new details regarding the planned 200 megawatts solar farm, named Locomotive Solar, including the project area and estimated economic impact.

The 1,700-acre project area will be mostly north of the Greentown Substation on South 1100 East just east of Greentown. Boundaries are roughly as follows: North 1000 East to the west, East 200 North to the north, South 1330 East to the east and East 100 South to the south.

To be clear, not all the land in the aforementioned area will be covered in solar panels or part of the project area and, thus, fenced in. While the project area is 1,700 acres, Ranger Power says the panels themselves will cover a fraction of that, and the company stressed that the project maps on display were still preliminary.

According to the company, the project would generate $9 million in annual economic benefits. That includes lease payments, tax revenue and other residual economic effects.

The exact length of the solar project has not yet been decided and is largely reliant on the company that strikes a deal with Ranger Power to buy the electricity generated by the solar farm and how long it wants to do so.

Adam Cohen, CEO of Ranger Power, said the company chose this area of the county because of its proximity to the substation.

ENGIE, a French multinational utility company, is also hoping to operate a large-scale commercial solar farm in that area, though it has failed twice to receive approval from the Howard County Board of Zoning Appeals for a special exception permit that is necessary before construction can even be considered.

Opponents of ENGIE’s solar farm largely cite the possible negative effect on nearby property values and the loss of tillable land.

“We heard that there were concerns at that BZA hearing that we still needed to address, so that’s why we’re here today, and that’s why we’re continuing to meet with people today,” Colin Snow, senior development manager for Ranger Power, said. “We believe this project can go forward while addressing the concerns.”

One of the nearby residents who stopped in to learn more about the solar project was Steve Danforth, who has lived in his house on North 100 East for the last five decades.

Danforth attended the open house to find out the project area and whether or not it would be near his home. He discovered that it mostly won’t, which made him happy. He was also happy to find out Ranger Power is an American company.

That all said, a major concern of his was temporarily losing farmable land.

The open house was one of a handful of ways Ranger Power has so far reached out to the community.

Earlier this year, the company launched a website and Facebook page for the Locomotive Solar project and established an office at Inventrek Park, 700 E. Firmin St., and an email address, info-locomotive@RangerPower.com, to give the public the opportunity to ask questions. Those interested in an in-person meeting can call 765-614-6006 to schedule an appointment.

It’s not yet known when Ranger Power will have its hearing in front of the county BZA. The company has not yet submitted its application for a special exception permit, and when asked, Snow said there’s no timetable for when the company will do it.