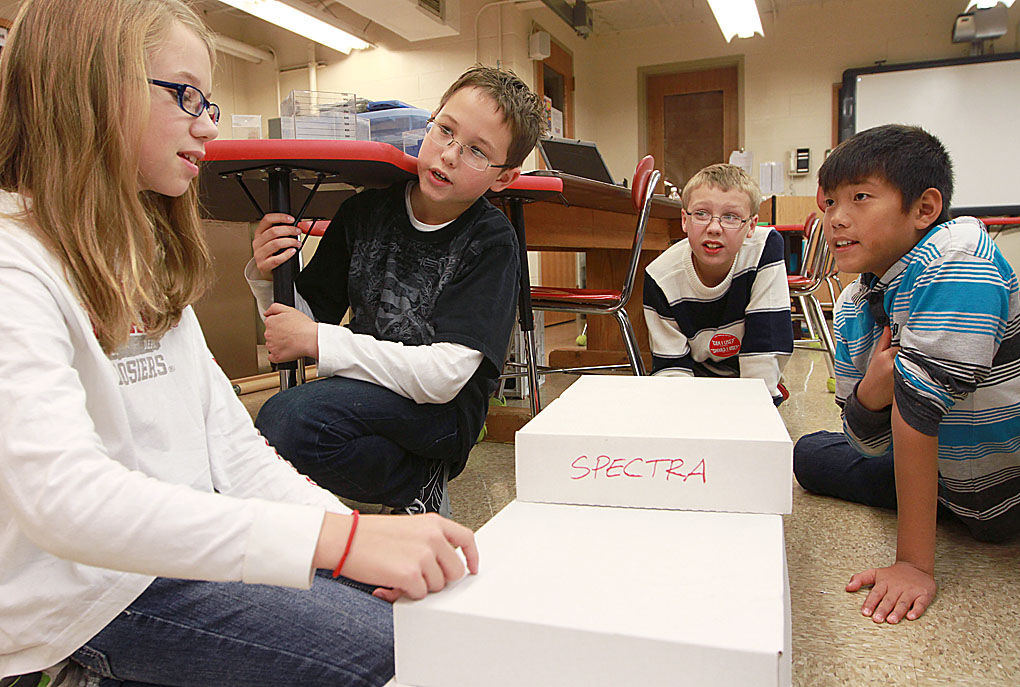 WHAT’S IN A NAME? Taya Grove, 10, from left, Cooper Reed, 11, Wesley Grove, 12, and Anjelo Flores, 10, work together to create a name for steps they are working to create for senior citizens that will allow them to easily get into a car. 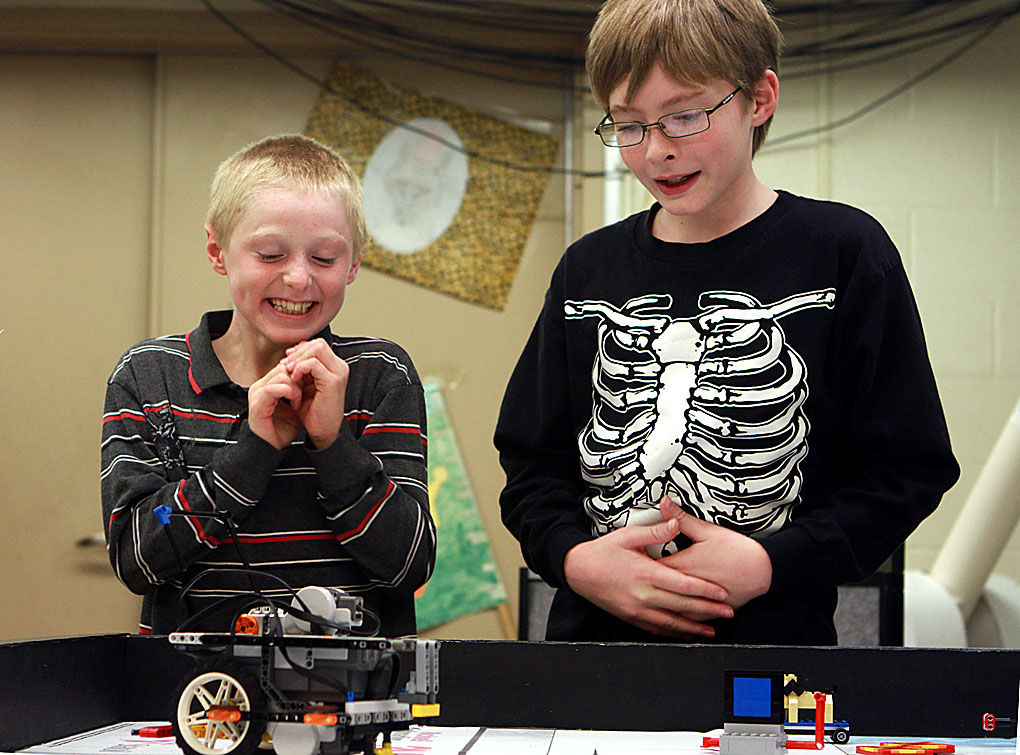 WHAT’S IN A NAME? Taya Grove, 10, from left, Cooper Reed, 11, Wesley Grove, 12, and Anjelo Flores, 10, work together to create a name for steps they are working to create for senior citizens that will allow them to easily get into a car.

Sixth-grader Camille Hoskins is reminded of her grandmother every time she and her classmates work on their new invention.

The Sycamore Elementary School and Central Middle School robotics team is building a set of stairs to help the elderly get in and out of large vehicles.

The project is one aspect of the team’s upcoming robotics competition.

For five weeks, team members have been doing research.

They want to know how they can best help senior citizens in the community, robotics coach Jim McCarter said.

For Camille, the project hits close to home. Someone close to her may need her help soon, she said.

“My grandma has Alzheimer’s,” she said. “I really try to remember some of the things I learn, so I can help her in the future.”

Camille’s teammates hope their research project helps a lot of other people, too.

McCarter said the kids are partnering with Samaritan Caregivers in Kokomo to develop the portable stairs.

The older men and women have complained, though, that they can’t get in and out of the volunteers’ vehicles very well, McCarter said.

“Seniors have trouble getting into big vehicles, but they still need to go places,” the robotics coach said.

Volunteers carry around step stools that are 6 inches tall, but even that’s too big a step for older people, McCarter said.

So students have set out to find a better way to get senior citizens safely inside vehicles.

Their first idea was a mechanical lift. Team member Wesley Grove and his grandfather built a model out of wood.

“One night we were up to almost midnight working on it,” Wesley said. “Then I finished it the next day from noon to 3 p.m.”

Once it was built, however, team members realized it was too big and too bulky to be practical for the Samaritan Caregivers volunteers.

“If they won’t use it, it’s worthless,” McCarter said.

That’s when they came up with the idea for a set of stairs made out of a strong, durable foam.

Students are still working out the details of the latest idea, but McCarter said the goal is for each stair to be just 3 inches tall and 11 inches wide.

They want the whole stair set to fit easily into a golf bag, he said.

The robotics team has about two weeks to test the idea. On Nov. 17, the students will present their project at the F.I.R.S.T LEGO League qualifying tournament at Purdue University.

Team members have 5 minutes to convince the judges their idea is well-researched and will work.

They’ll make posters, perform skits and make a sales pitch to the judges.

“This project is huge,” said team member Taya Grove. “You can’t win the competition with just the robots.”

Students said scoring at the competition changed recently to put more emphasis on the research project.

That theme even carries over to the actual competition between robots. They earn points by performing activities and tasks that a senior citizen might be found doing.

Last week, Camille and her partner fine-tuned their own robot.

In less than 3 minutes, their robot could successfully bowl, fix a LEGO chair, exercise, quilt and pick up a pill bottle, among other things.

Both the research project and robots require a lot of work, though.

The students practice more than an hour a day, four days a week.

Camille said they sometimes have six-hour “marathon” practices on the weekends.

But the program is good for the whole team, McCarter said.

He said his students take a lot away from the robots, but they get something extra special from the research project.

This year they might get to help some people out with their stairs, he said.

“Samaritan Caregivers might actually be able to use this,” he said. “It’s very worthwhile.”