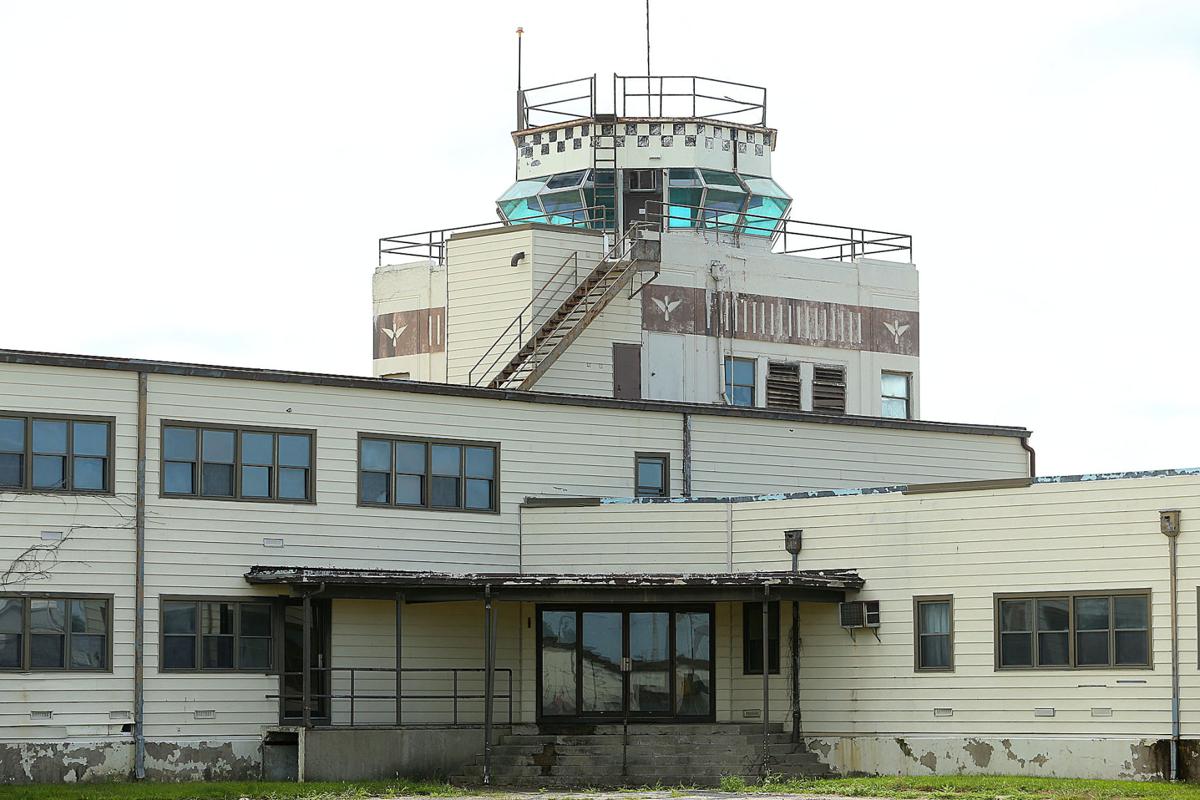 COMING DOWN: The original air traffic control tower built at Grissom Air Reserve Base in 1942, is set to be demolished. 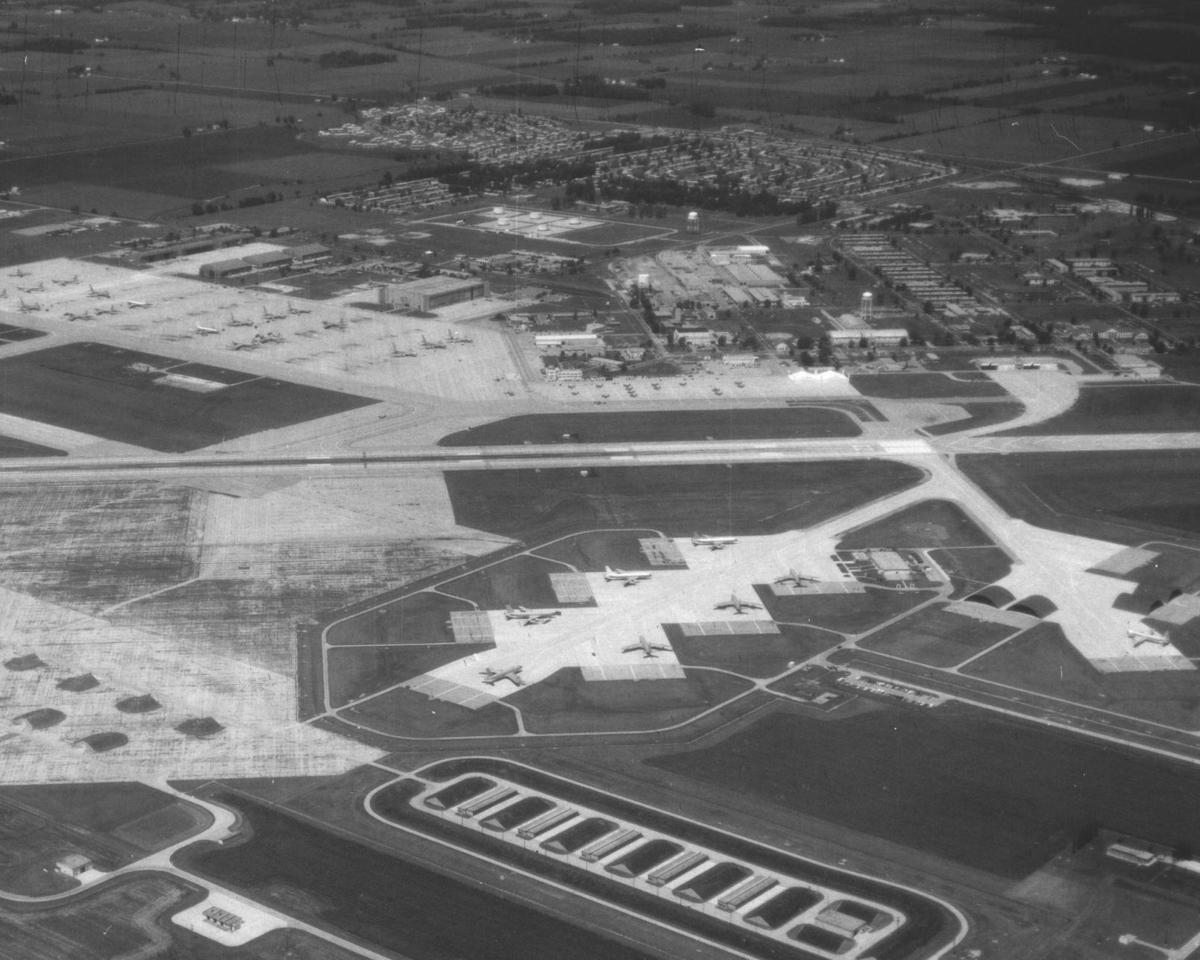 AN HISTORIC LOOK: This aerial shot of Grissom Air Force Base is from the Grissom AFR archives.

BUNKER HILL – The first air traffic control tower built in 1942 at Grissom Air Reserve Base is set to be demolished after officials say falling debris from the dilapidated structure is causing hazards at the base’s air strip.

Jim Tidd, executive director of the Miami County Economic Development Authority, said the tower was built when the base was first constructed during World War II as a U.S. Navy installation and served as the main air traffic control tower for decades.

Over the years, the structure also housed base operations, a weather detachment and administrative offices.

The tower stopped being used around 1991, just before Grissom realigned as an Air Force Reserve Base, which shed more than 800 acres from the installation.

After that, the building, along with dozens of other former military structures, were turned over to the county to be redeveloped as commercial properties.

But that never happened with the air tower. Tidd said new federal regulations barred any new development at the structure since it was so close to the air strip.

“There are facilities on the former base that have no redevelopment potential,” he said. “In this case, the condition of the building and its proximity to the runway doesn’t allow for it to be reused.”

Now, the tower and buildings attached to it have sat vacant and unused for nearly 30 years, and all the structures have fallen into disrepair.

Tidd said that’s become a serious issue since pieces of metal and fabric have started blowing off the structure and landing in the airstrip taxi way inside the base. That’s forced both military and county officials to quickly clean up the debris before it is sucked into the engine of a military or civilian airplane.

“The tower has pretty much sat dormant and has become a structural hazard, and it’s causing problems for the aircrafts,” Tidd said.

He said the county had hoped to have the tower torn down by now, but the process has taken longer since the state’s Division of Historic Preservation and Archelogy, which is part of the Department of Natural Resources, recently determined the tower had historic significance.

That triggered a mitigation process that is required any time a government unit uses taxpayer money to significantly alter or demolish a historic property. Miami County must now come up with a plan, that the state approves, to make up for the loss of that history.

Tidd said they are proposing to put up a placard of some kind at the site of the tower, and also give copies of the original building blueprints to both the Grissom Air Museum and Miami County Museum.

Paul Hayden, director of Indiana Landmark’s northeast field office who inspected the air tower as part of the state process, said the structure is historically significant, but there’s no doubt it needs to be demolished.

“It’s unfortunate, but necessary,” he said. “We’ve all agreed that it’s historically important, but you reach a tipping point where it’s just not economically feasible to restore.”

Now, the county is going after state grant funding to pay for the demolition, which will likely cost over $250,000, Tidd said.

Once the state historic preservation office signs off on the mitigation plan, the county will apply for funding through the Indiana Office of Community and Rural Affairs. Tidd said if all goes to plan, they hope to have the tower and buildings torn down by the end of the year.

“With the winds that come with winter, our hope was to get it down soon, but because of the process with the state historic preservation office, we weren’t able to that,” he said.

The tower is just the most recent former military building to be demolished since Grissom realigned as an Air Force Reserve Base.

Over the years, crews have torn down the gym and massive swimming pool once used by airmen. Munition storage buildings and bunkers that once held bombs have also been destroyed.

“We’ve had to demolish buildings out here at Grissom that really had no reuse or redevelopment potential, and the tower is now one of those,” Tidd said.

The base’s current air traffic control tower was built in 2012 and replaced a second tower that was built in 1969. The $7.4 million, nine-story structure services both the military and civilian planes that land at the base on what is the longest runway in the state.