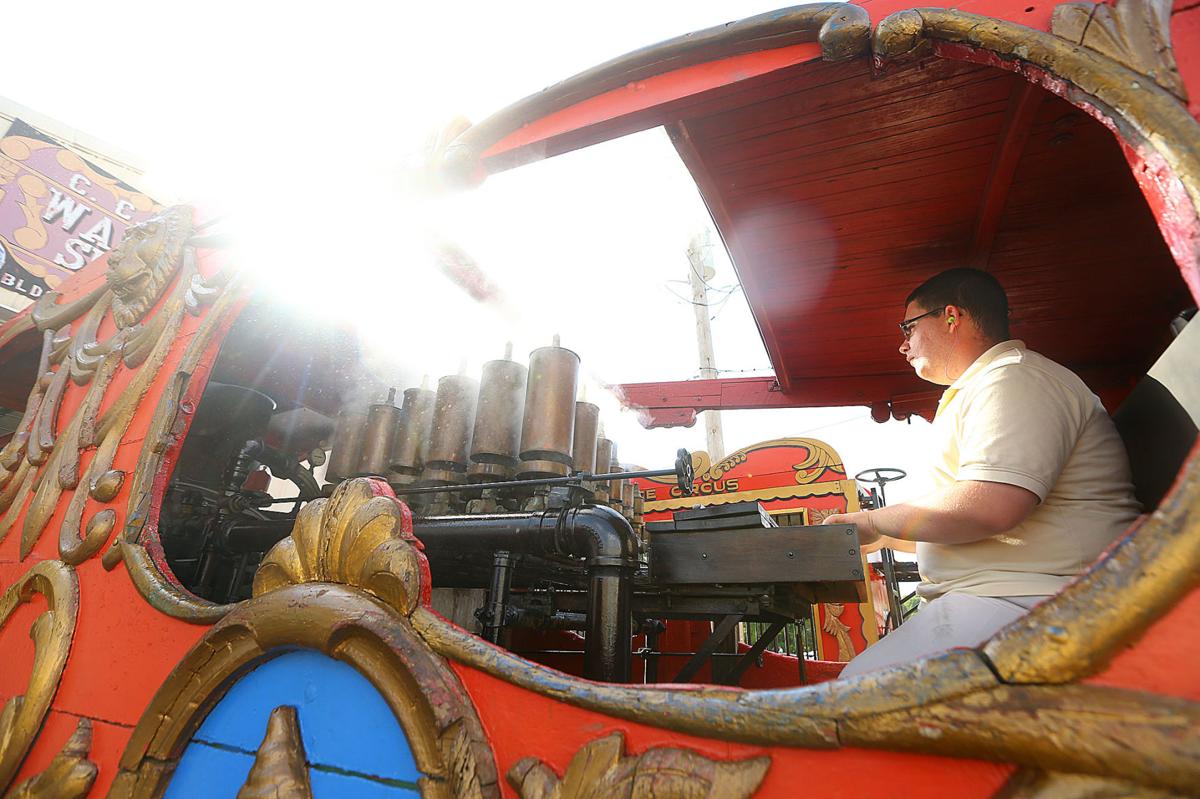 Jacob Minns plays The Gentry, a steam calliope on July 17, 2019. Minns, now 22 and a professional organist, started playing the calliope in Peru's circus parade when he was 15. Kelly Lafferty Gerber | Kokomo Tribune 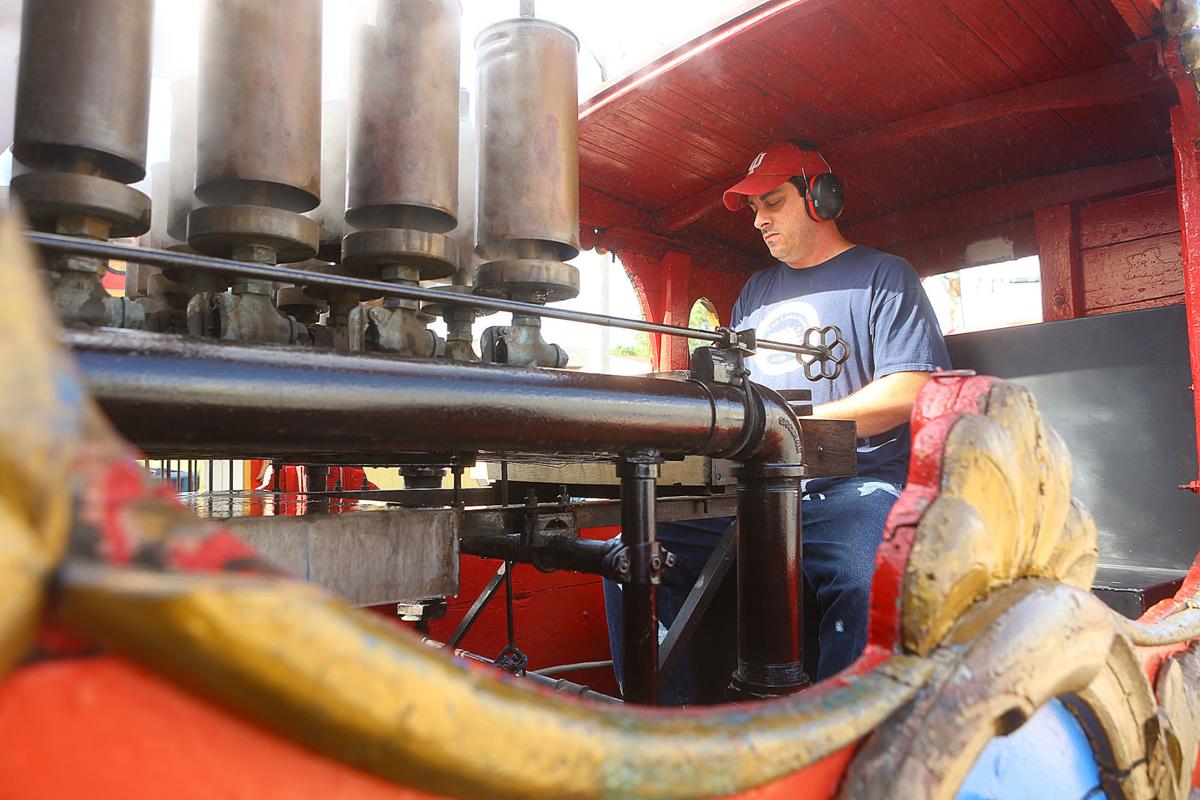 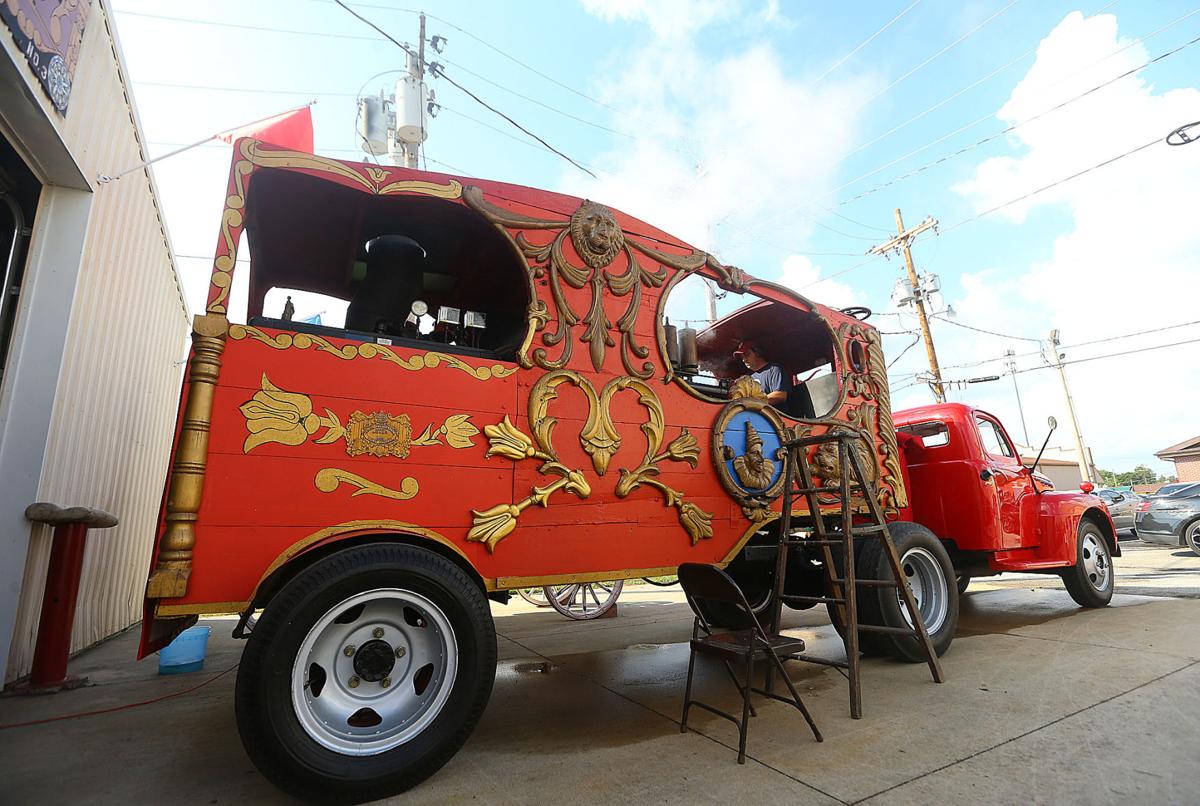 The Gentry calliope is played outside of the Wagon Barn behind the Peru Circus Building on July 17, 2019. Kelly Lafferty Gerber | Kokomo Tribune

PERU – When Jacob Minns was 12 years old, his piano teacher took him to the Peru Circus City Festival for a special excursion to try his hand on a one-of-a-kind steam calliope.

Minns sat down at the miniature keyboard, played a song called “Oh! Dem Golden Slippers” – and was hooked.

“I just took off,” he said. “I had no problem picking up how to play it. It was like it was second nature.”

Three years later, Minns sat behind another antique steam calliope as it rolled down the streets of Peru in the annual Circus City Festival Parade. He was just 15, and the youngest person to ever play the steam instrument in the parade.

And on Saturday, Minns, now 22, once again took his place behind the keyboard on the nearly 100-year-old calliope blasting out jovial circus tunes to the crowds that lined the streets during the longest running and only circus parade left in the country. The festival this year is celebrating its 60th season.

“When I’m playing in the parade, I’ll look up in the middle of a song and see people with these big grins on their faces,” he said. “Calliopes are happy instruments. The sound of it is wonderful. It gives you such a good feeling, because you know you’re making peoples’ days.”

Minns has played in the parade now for eight years, making him one of the longest serving calliope players in Peru’s circus history.

That’s an honor that’s not lost on Minns – a Peru native who grew up watching the parade every year as a kid and seeing the steam rolling off the whistles of the instrument.

Now, Minns is one of the best calliope players around.

Tim Bessignano, the circus festival’s vice president of the museum and exhibits who helps maintain the instruments, said Minns’ has an innate talent in his playing that evokes the spirit and sound of the early American circuses.

“There are people out there who can play, but they can’t play circus music,” Bessignano said. “That’s what we need, especially during the circus festival, and he’s pretty gifted when it comes to playing. If you give him the song and the rhythm, he can pick up just about everything.”

But even though he’s played organ and piano nearly his entire life, playing the calliope during Peru’s circus always feels special for Minns.

“It’s just like greeting an old friend. It doesn’t get old,” he said. “It’s like a relationship, and one you can’t get rid of.”

Minns loves calliopes, and that love stems from the instrument’s deep roots in Peru.

Those roots were planted by Dave Morecraft, a Peru native who was one of the last steam calliope builders in the world.

Morecraft died in December 2016 from an illness at the age of 57, but his calliopes live on in locations around the globe.

Zach Morecraft, his 33-year-old son and a board member of the International Circus Hall of Fame, said his dad was an engineer who taught himself how to build the instruments back in the 1980s after seeing one in a parade.

“When he saw one of these for the first time, he was completely enthralled with it,” Zach said. “It was two things that he loved – steam and music. He said, ‘I’ve got to get my hands on one of these.’”

But instead of buying one, he decided just to build it. He personally machined the castings, rolled and brazed the copper tubes and assembled all the parts onto a manifold of his own construction.

He eventually built around six calliopes inside his Peru shop. Four of those were made for riverboats, including ships in Holland and Japan. One of those also went into the American Queen, the largest riverboat ever built that operates on the Mississippi River.

Morecraft also built a calliope just for himself. It was that instrument that played for years in the Peru circus parade – and it was the same calliope Minns played for the first time when he was 12.

“He was one of my best friends, and calliope was his thing,” Minns said. “His calliope was the first one I ever played.”

Today, Zach, who works full time at Progress Rail in Peru, is carrying on his father’s legacy. He helps maintain and restore calliopes around the country, as well as the two owned by the Peru Circus City Festival.

“I was really born into it,” he said. “I didn’t have much choice. Dad was doing all this stuff before I was even born, so it was just a natural thing.”

THE CALLIOPE LIVES ON

On Wednesday, Zach Morecraft and Minns could be found near the Peru circus building helping fire up the festival’s largest calliope called the Gentry, which was built in the 1920s in Cincinnati and is housed in a circus wagon that was made in Peru in 1901. The whole contraption is hauled on the bed of a 1949 Ford pickup.

The calliope was originally built with a coal-burning furnace to produce the steam that blasts through the whistles to create sound. It was Minns’ grandfather who installed a modern-day gas furnace to do the job.

With circus performers arriving for the night’s performance, Minns and Morecraft clambered up a ladder into the calliope to take turns playing on the small keyboard. Each key they pushed opened the valves and let the steam pour through the whistle to make them sing.

“You’re playing on 65 pounds of steam pressure, so you really have to bang the hell out of it,” Minns said.

It was hot outside, and the two were constantly doused with water as the whistles spit out the condensation created by the thick, white steam, which billowed high up into the air.

To onlookers standing beside the calliope, the instrument was nearly deafening. The high notes sounded like a hundred dog whistles blowing at once. That’s why a calliope can be heard up to 3 miles away, and that’s why Minns and Morecraft both wore earplugs when they play.

But it’s those ear-blasting decibels that made calliopes such a good fit with the circus.

“The calliope was really just an announcer that the circus is in town,” Minns said. “It would always go through the parade, and then lead everyone to the ticket booth.”

Today, Minns and Morecraft just play to entertain the crowds at the Peru circus festival. But their love of the instrument goes deeper than that. For them, it’s about keeping one of America’s most unique musical traditions alive.

“We don’t want this to become a dying art, because the longer it stays alive, the more people will become interested in it,” Minns said.

That’s why they’re both working to restore one of Morecraft’s father’s old calliopes. The two are making their own whistles and other parts to get the instrument into perfect playing condition.

It’s a skill only a handful of people in the world have.

Festival vice president Bessignano said it’s encouraging to see younger people carrying on the city’s calliope tradition. Without guys like Minns and Morecraft, he said, the rare instruments would be confined in museums, and their chipper, airy whistle would never entertain crowds again.

“It’s pretty phenomenal, when you think about that, that these young guys are doing this,” Bessignano said. “It’s a dying art, in a way, so we need people like them.”

But for Morecraft, fixing, building and playing calliopes all comes down to the passion he inherited from his dad.

“My earliest memory is seeing my dad’s calliope in the circus parade in town getting pulled down the street by horses,” he said. “That memory is burnt into my brain. Keeping the tradition going feels good, because I grew up loving this.”

PERU – Tom Gustin and Rex Stitsworth have played in the same band for 60 years. But this isn…