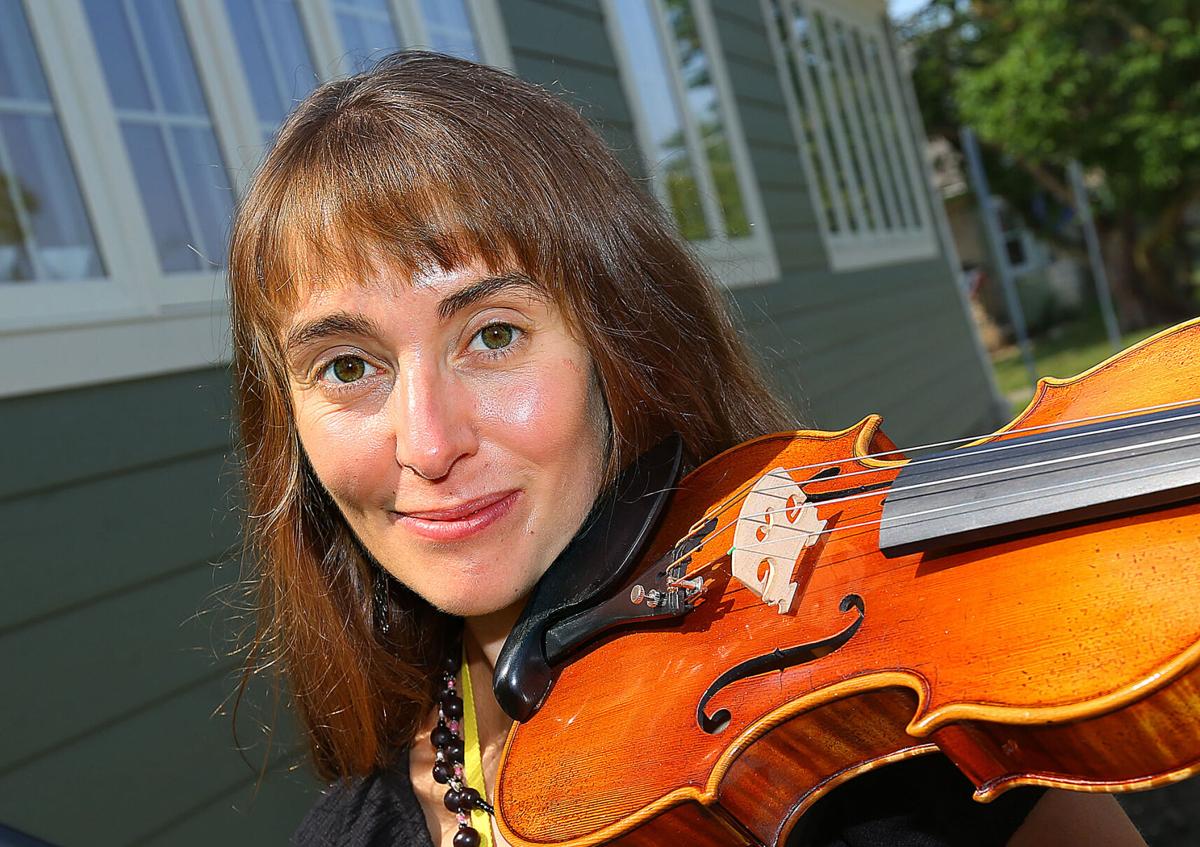 Dr. Erica Rumbley did musical therapy with refugees in northern Greece back in January, and now she incorporates a lot of that into her current work at Watered Garden. Sept. 9, 2020. 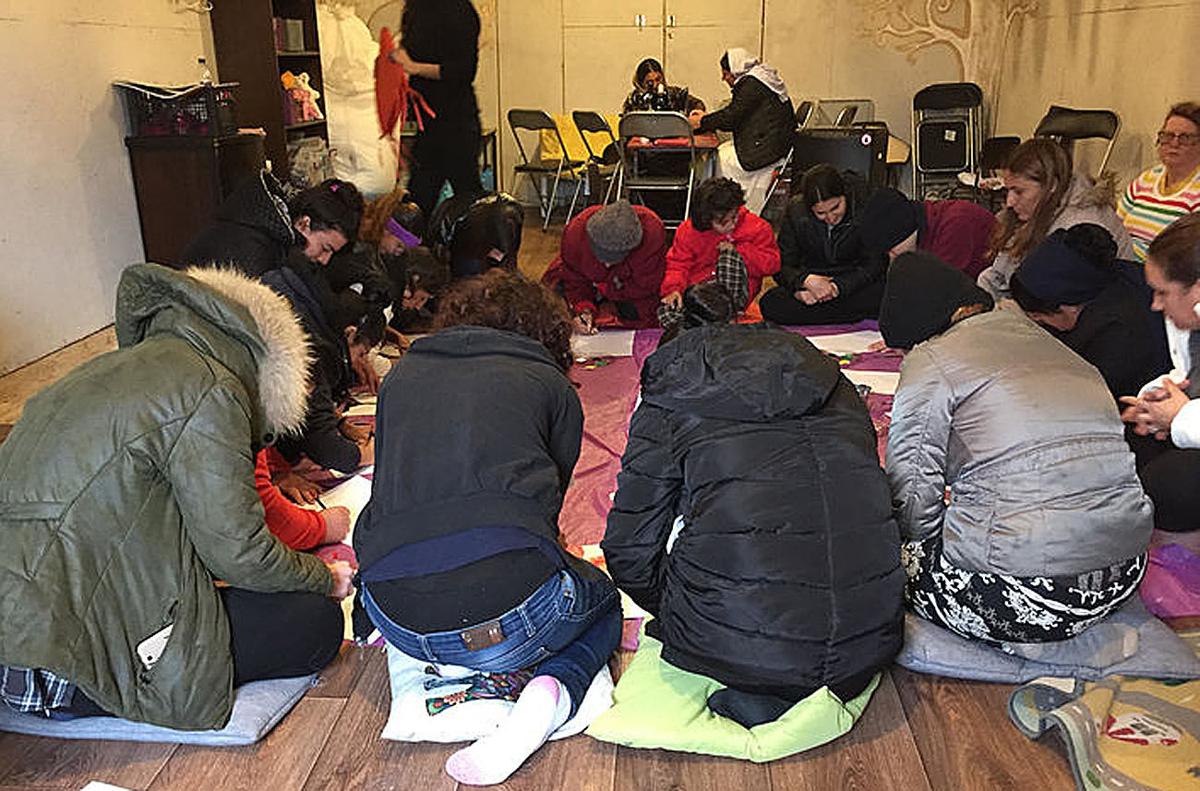 Dr. Erica Rumbley did musical therapy with refugees in northern Greece back in January.

Dr. Erica Rumbley did musical therapy with refugees in northern Greece back in January, and now she incorporates a lot of that into her current work at Watered Garden. Sept. 9, 2020.

Dr. Erica Rumbley did musical therapy with refugees in northern Greece back in January.

A classically trained pianist and violinist with four music degrees, Rumbley fell in love with the subject when she was about 10 years old and has spent the better part of her adult life teaching it to others.

It’s a passion that has since taken her to the ends of the earth too, from a tiny village in Africa to a university near the Mongolian border.

“I guess I just love the idea of using music to help people who have been through difficult times,” she said during an interview with the Tribune last week, “… to be able to see the way that music kind of unites across cultures and across traditions.”

And never was that perhaps more true than Rumbley’s most recent stint, spending several weeks last January teaching piano and English to Yazidi refugees in the Serres area of northern Greece.

Rumbley was teaching piano at Ningxia University in northwestern China at the time, and she said she knew she’d have a few extra days off on her winter break due to the Chinese New Year.

So she looked around and located a volunteer opportunity through Lifting Hands International, a humanitarian organization that provides assistance to refugees both in the United States and around the world.

It was a perfect fit, Rumbley noted.

“It was kind of a dream of mine to work with refugees there,” Rumbley said. “… I lived in Lexington, Kentucky, for 12 years, and they have a pretty big refugee community down there. I volunteered and did a lot of tutoring and just became friends with a lot of the community from Iraq and Syria, and I was just really excited to do more of that work.”

According to the humanitarian group ONETrack International, there are more than 2,500 Yazidi refugees currently living in northern Greece, where they fled religious persecution and genocide at the hands of ISIS in their native region of Iraq back in 2014.

And while Rumbley and the rest of the volunteers didn’t live at the Yazidi camp, they did spend the better part of each day with the refugees.

“I’d teach piano about two or three hours, go and teach an English class, and sometimes I’d then go back and rest but return to teach another English class in the evening,” she said. “After activities, I’d then go to an English discussion group or do a yoga thing to relax. On the weekend, we’d work with youth, but it was mostly just 18 and above during the week while the kids were in school.”

And what she learned about humanity during that time could fill a thousand books, Rumbley added.

“Just to see them and just to know what that community had been through, to see them finding a little bit of hope and light was so rewarding,” she said. “… There was this family, and I think the girl was either 18 or 19, but she taught guitar. They’d been through so much. I think five of her brothers had been killed by ISIS maybe. So to see the way they came through that and found joy and purpose in the music and programs that the volunteers did was amazing.

“… The refugees, their home is gone,” Rumbley continued. “A lot of them, their families are gone. And they’re stuck in these little camps just waiting. They can be there for five years or even 10 years. … And I think that’s why the music and the outlet for them is so important because it gives them something to work for and just a little bit of hope while they’re waiting.”

Because music really is a universal language, Rumbley noted, one that transcends races, religions, cultures and nationalities.

“It’s just so neat to be able to hear music together,” she said. “One night, we had Yazidi circle dances, and it was just fun to be able to participate in their culture, to see the way that musical traditions might be a little bit different but also unifying.”

And while musical scales and notes are important, it’s more about fostering human connections, Rumbley added.

“I think for them, it’s just really important to know that someone from the outside world actually cares about them and their situations. … Most of the refugees in Greece are in a really difficult situation because a lot of the Greek people really don’t want them there. They’ve been kind of stuck, and the European Union is not letting them in either. So just for people to come and say, ‘We care about you’ is so valuable.”

Rumbley then sat up in her chair and paused a moment before talking about how easy it is for someone else to do what she did for the Yazidis, to provide a daily bit of hope to those who are struggling.

“I feel like sometimes we’re just so divided,” she said. “But sometimes it’s just about finding somebody who’s different from you are and just sharing friendship. Even if you’re not teaching something, just to share that friendship. … It’s maybe about just realizing that even if you have different beliefs, God created everybody, and we’re all equal in that.

“There’s so much we have in common,” she added. “So maybe we should all just reach out and take that step, whether it’s with a refugee or even just with someone living across the street.”