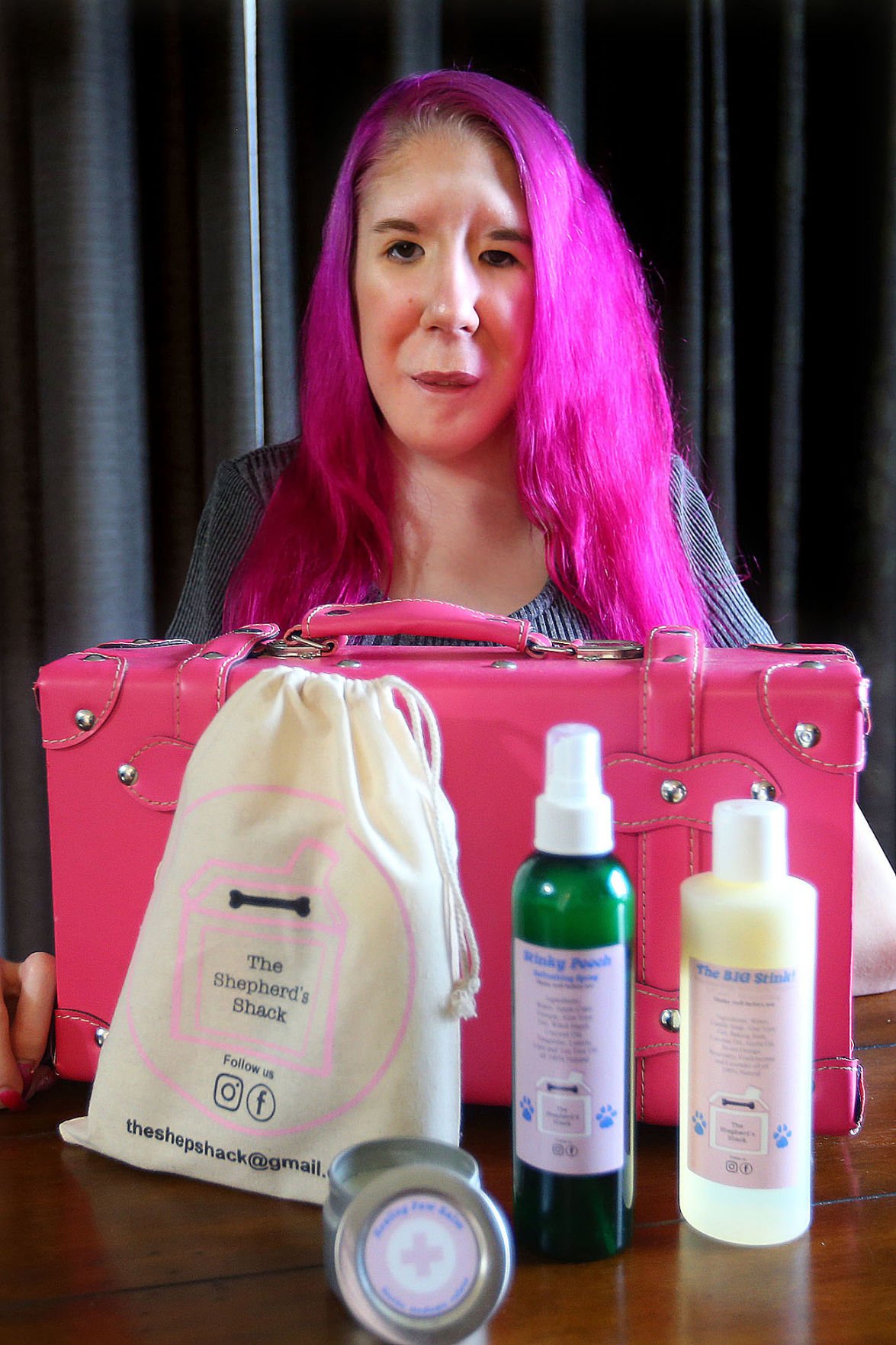 Lizzy Lewellyn is a 17-year-old student who started her own dog product business called The Shepherd’s Shack. 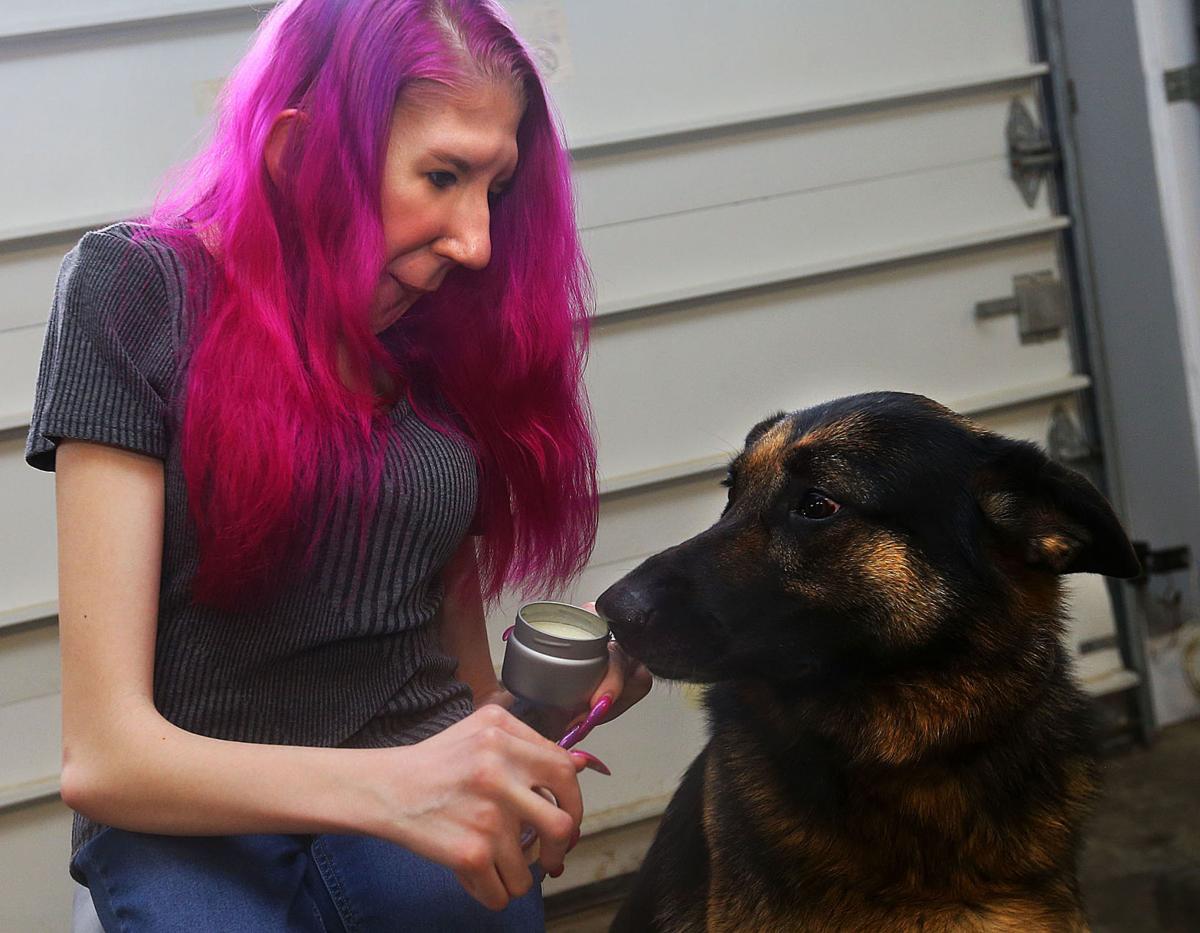 Lizzy Lewellyn gets ready to use her paw palm product on her dog Astrid. 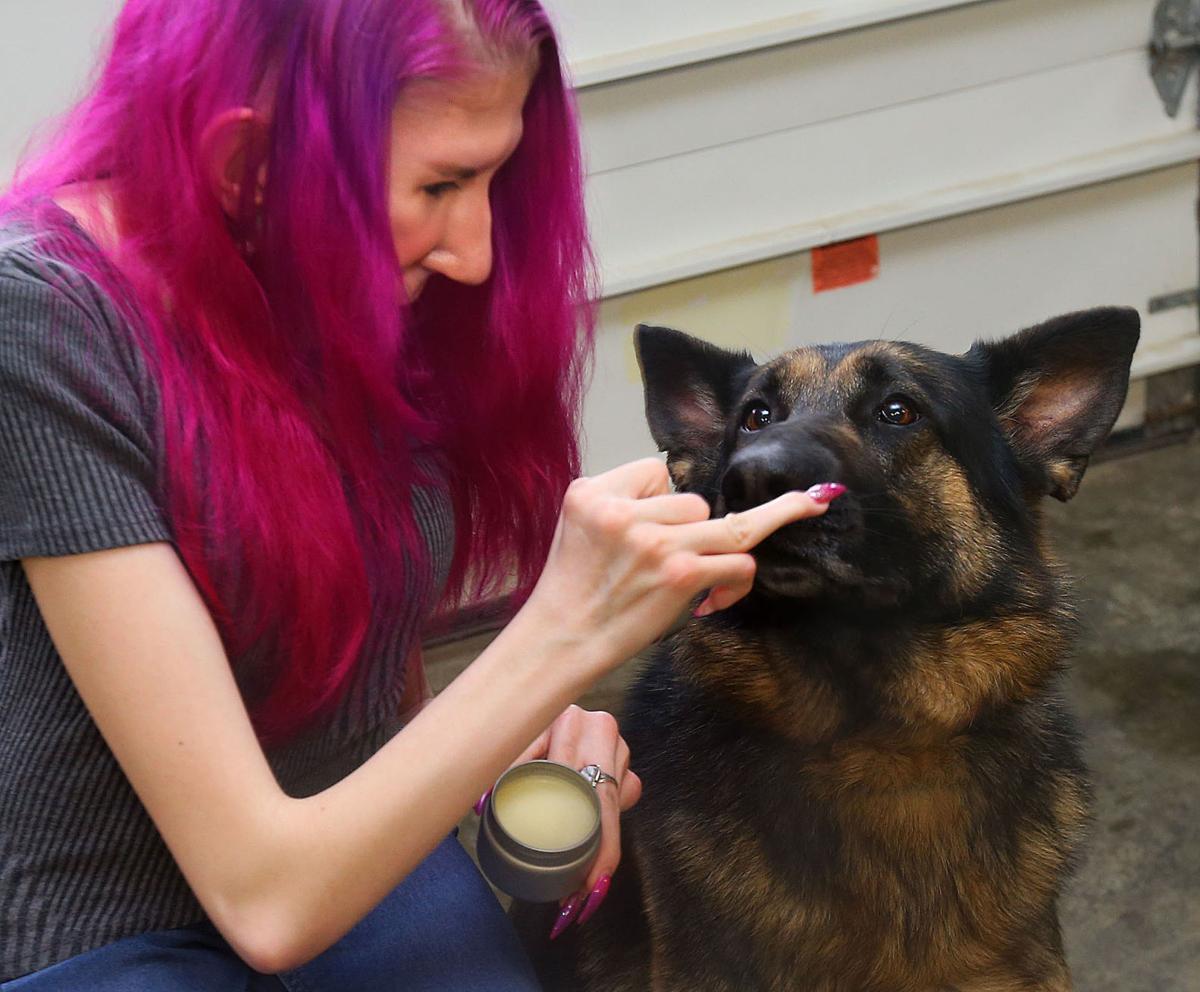 Lizzy Lewellyn is a 17-year-old student who started her own dog-product business. With her dog Astrid using one of her products on Feb. 18, 2020. Tim Bath | Kokomo Tribune

First, she’s 17 years old and full-time high school student. Second, she has scoliosis and was born with a rare medical condition called arthrogryposis, which causes curved joints and shortened muscles that make it hard to do certain movements.

But none of that has stopped Lewellyn from starting one of Kokomo’s newest businesses called The Shepherd’s Shack, producing and selling a line of all-natural dog products like shampoos, balms and treats – and doing it all with a good sense of humor.

There’s a spray called Stinky Pooch, made with apple-cider vinegar, witch hazel, tangerine, lemon and other ingredients, to cut down on that dirty-dog smell.

A shampoo called The BIG Stink! acts as a flea repelling, anti-itch, moisturizing product made with all-natural oils and soaps.

Then there’s Healing Paw Balm, made with beeswax, mango butter, coconut oil and a list of other ingredients, which helps with a slew of ailments.

Lewellyn came up with all the product recipes herself after months of intense research, and makes them all from inside her home on the city’s south side.

She launched her business in August during an arts-and-crafts fair at Bowden Flowers, where she took her products to see what kind of response she’d get. And that response ended up blowing her away.

“It was a huge success,” Lewellyn said. “I was so surprised. It made me think, “Hey, I think I’ve got something worth continuing here.’ I figured if it was a flop, well, hey, at least I tried something and had fun doing it. But people started taking my cards and asking me all about it.”

Today, Lewellyn has created a website and social media pages for her business, which she named after her beloved German shepherd, Astrid.

“It’s her shepherd’s shack,” she said. “That’s why she’s on the website and pictures, and models for all the products. She’s the mascot.”

So far, most of the sales have been made through the website, but Lewellyn also goes to different events to sell and educate people about her products.

But Lewellyn wants to educate people about more than just her dog products. She also wants people to realize they can follow their dreams and be successful regardless of their age or circumstances.

Lewellyn said that’s a lesson she learned the hard way.

Growing up with a developmental disability, she said, made everything more difficult. It also made her the target of bullies that would decimate her self-esteem.

“I feel like that’s all that people see when they look at me, and it just shatters any confidence I have,” Lewellyn said. “Because of my limitations and my size, it’s very difficult to get noticed and have people take me seriously.”

But, Lewellyn said, she began to accept who she was and gain the confidence to start a new business after transferring to Insight School of Indiana, an online public school that allows for a more flexible schedule.

She said teachers and staff there encouraged and supported her as she worked to get her new business off the ground. They even surprised her during a school board meeting with an award for starting a company.

“That school absolutely changed my life,” Lewellyn said. “I think without that program, I wouldn’t be who I am today. They gave me so many opportunities and opened so many doors for me.”

Now, even though she just launched the business, Lewellyn wants to start giving back. She said she hopes to start making enough money through The Shepherd’s Shak to donate a portion of her profits to animal shelters and nonprofits that aim to curb climate change.

“I really hope my business takes off, because I really want to make a difference, especially for animal shelters and animal groups,” she said.

Lewellyn said she plans to really start developing her business in earnest later this year after she graduates from high school in June. After that, she said, she plans to dedicate herself to making The Shepherd’s Shack successful.

She also has plans to enroll in a college at some point to study something related to business, but that’s taking a back seat right now to her newly established company.

Lewellyn’s mom, Jackie, said it’s been exciting to watch her business take off, and see her so excited about the project.

“We’re really proud of her,” Jackie said. “She’s come up with the way everything looks – the stickers and branding. She’s done all of that. She thinks it comes so naturally, but it’s something that some people just couldn’t do.”

Lewellyn said her dream is turning The Shepherd’s Shack into an international business with products sold all over the world. She said that dream has become her life’s mission.

“I know I have a purpose, and I feel like this business is my purpose,” she said. “It’s what I’m supposed to do with my life.”

But more than anything, Lewellyn said, she wants to show the world that anyone can be successful and follow their dream regardless of their circumstances.

“Yes, I have these limitations, and yes, I look this way, but it doesn’t have to be a bad thing,” Lewellyn said. “I want people to know they’re not alone or limited just because you have a physical disability. Your condition doesn’t limit the amount of success you can have.”