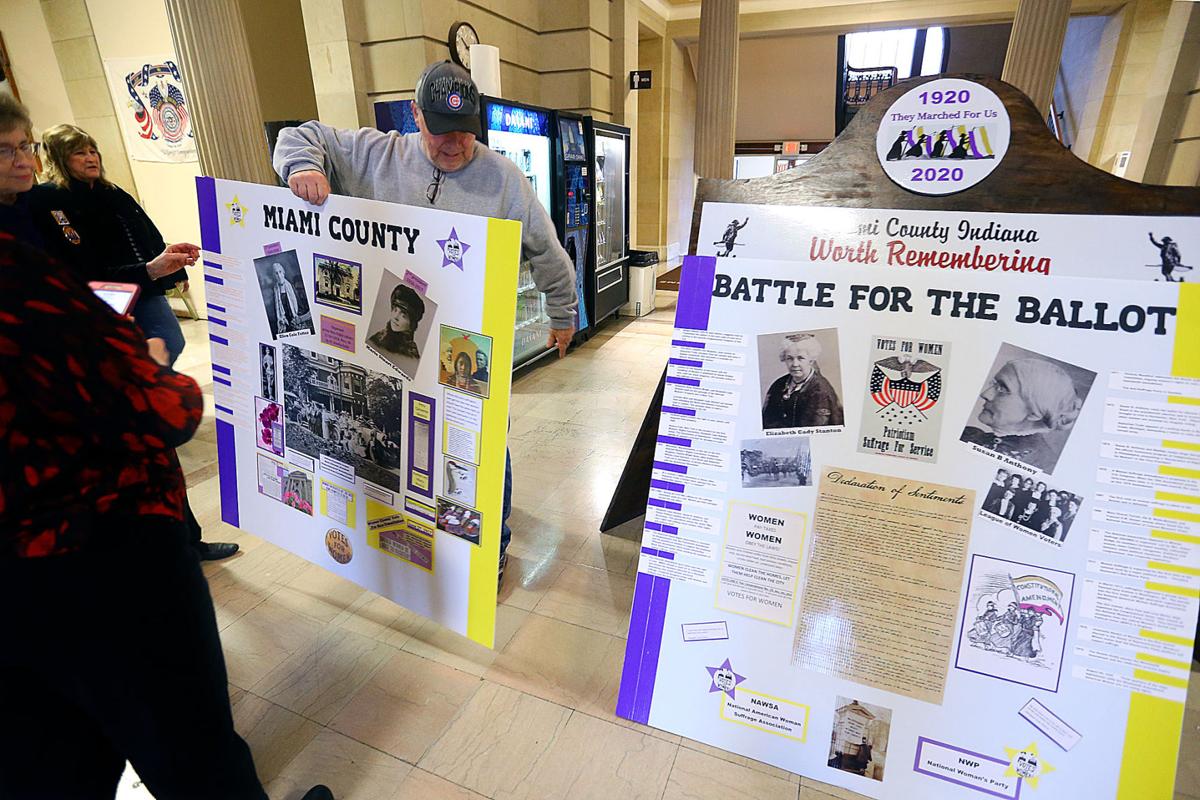 Bruce Brindle and other members of Miami County Worth Remembering set up an exhibit remembering the local suffragettes at the Miami County courthouse on Jan. 10. 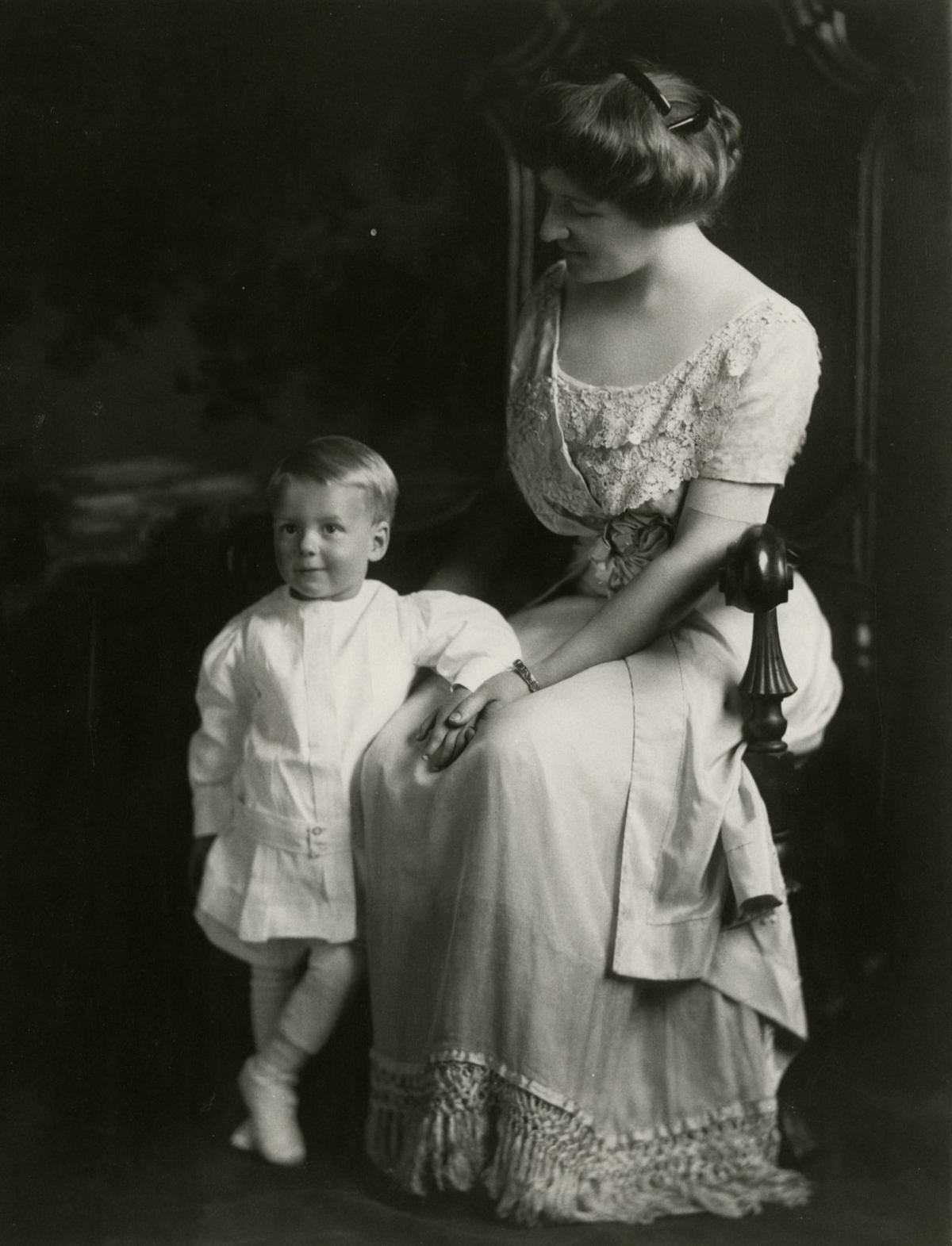 Peru native Marie Stewart Edwards was a staunch suffragist who stood on the front lines fighting for women’s right to vote. She was a founding member of the local Peru branch of the Woman’s Franchise League of Indiana. In 1917, Edwards was elected president of the state league. 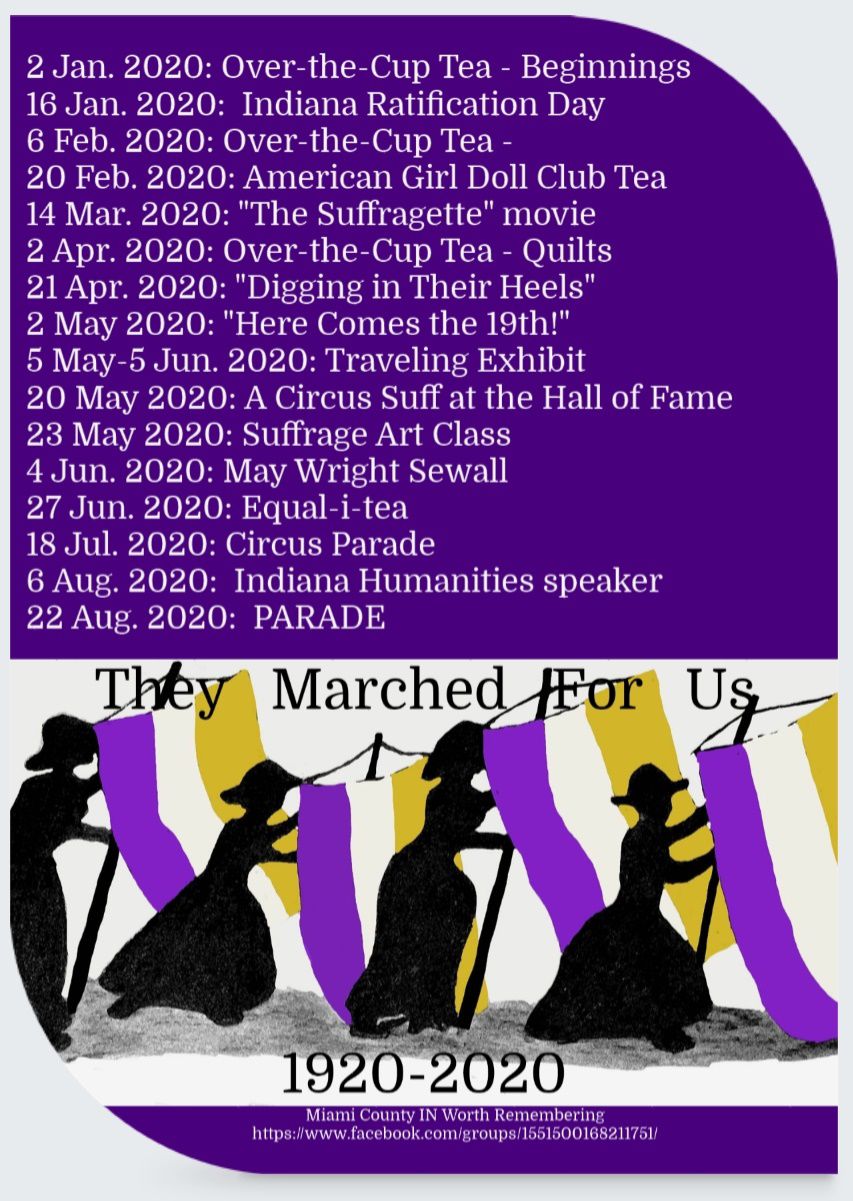 One hundred years ago today, Indiana became the 26th state to ratify the 19th amendment giving women the right to vote.

The decision by the Indiana General Assembly came after a long, hard-fought battle to bring equality to the ballot box.

And no one fought harder for that equality than Peru native Marie Stewart Edwards – a staunch suffragist who stood on the front lines fighting for women’s right to vote.

Edwards, a mother who worked at her husband’s chair factory in Peru, was a leading advocate in Indiana for the women’s suffrage movement. She was a founding member of the local Peru branch of the Woman’s Franchise League of Indiana. In 1917, Edwards was elected president of the state league.

The next year, through her request, the league moved its headquarters from Indianapolis to Peru to make it easier for Edwards to run the organization.

Then, in February 1920, Edwards helped found the League of Women Voters. Within a year, around 2 million women had joined the nonpartisan organization that pushed to educate women about voting.

Regine Brindle, a volunteer with the nonprofit group Miami County Worth Remembering, said Edwards was a homegrown mover and shaker in the fight for women’s rights, but few know her name.

That’s why her organization has launched a slew of activities this year to remember and commemorate the unique role Peru activists played in the ratification of the 19th Amendment.

“We want to let people know that we had figures here in key places that really impacted the nation,” Brindle said. “People here played a big part, and we need to know this and appreciate this and say, ‘Wow.’ They need to be talked about.”

Miami County Worth Remembering started talking about Peru’s activists earlier this month when they held their first “Over-the-Cup Tea” event – an homage to tea parties that first launched the suffrage movement in 1840s. The group will hold other tea events this year to discuss the suffrage movement.

Then, last week, volunteers set up a large display in the rotunda of the Miami County Courthouse documenting the history of the women’s movement and the role Miami County played in that movement.

Throughout the year, the nonprofit has more than a dozen activities to honor and celebrate suffragists. And they all are leading to Aug. 22, which marks the centennial anniversary of the ratification of the 19th Amendment.

That’s the day the group is organizing a huge parade through downtown Peru to not only commemorate the anniversary, but also recreate the large parade held in the city in June 1919 to drum up support for the movement.

Brindle said it was the only suffragist parade ever held in Peru. Sixty women dressed in white, wearing no hats, followed two other suffragettes riding horses. The group gathered at their new headquarters on East 3rd Street and marched to the courthouse, where speeches were given in a bipartisan fashion.

Brindle said they plan to hold the same kind of parade this August, except they hope to draw way more than 60 people.

The parade will be the culmination of more than six months of research and planning by volunteers with Miami County Worth Remembering.

And it was through that research that volunteers like Brindle realized just how big of a role Peru played in fighting for women’s right to vote.

“I never realized it took so many women to make it happen, and we take it so for granted,” she said. “And we’ve only had the right for 100 years. I think the most important part of all of this is learn the value of the vote.”

Edwards was the major figure in Peru who lead the state’s efforts to ratify the 19th Amendment, but the group also wants to highlight others connected to the city.

That includes May Wirth, a horse rider and performer with the Barnum and Bailey Circus. She was inducted into the International Circus Hall of Fame, which is located near Peru.

Wirth was one of the Barnum and Bailey’s Circus Suffragettes – a group of about 300 female performers who fought for women’s rights. Brindle said the group was looked down upon by national organizations such as the National American Woman Suffrage Association, who thought they were low-class vagabonds.

But that changed when the circus suffragettes decided to crash one of the national group’s tea gatherings in New York City. Wirth and other performers showed up and demanded a place at the table – and they got it.

“After they crashed the tea, the high society women decided they weren’t so bad after all,” Brindle said. “In fact, they realized they could be great ambassadors, because they traveled all over the country and could recruit people.”

That’s a story Miami County Worth Remembering wants to tell during the city’s annual Peru Circus Parade, which is held in July as part of the Circus City Festival.

Brindle said there lots of other stories in Peru that connect the city to the suffragist movement, and they all highlight the immense effort it took from people across the state and nation to get women the right to vote.

She said she hopes all the events and activities planned in Peru show that and make people appreciate all that work 100 years later.

“We need to be thankful for what we have, and we need to appreciate it, because we have so many people in this country who don’t vote,” Brindle said.