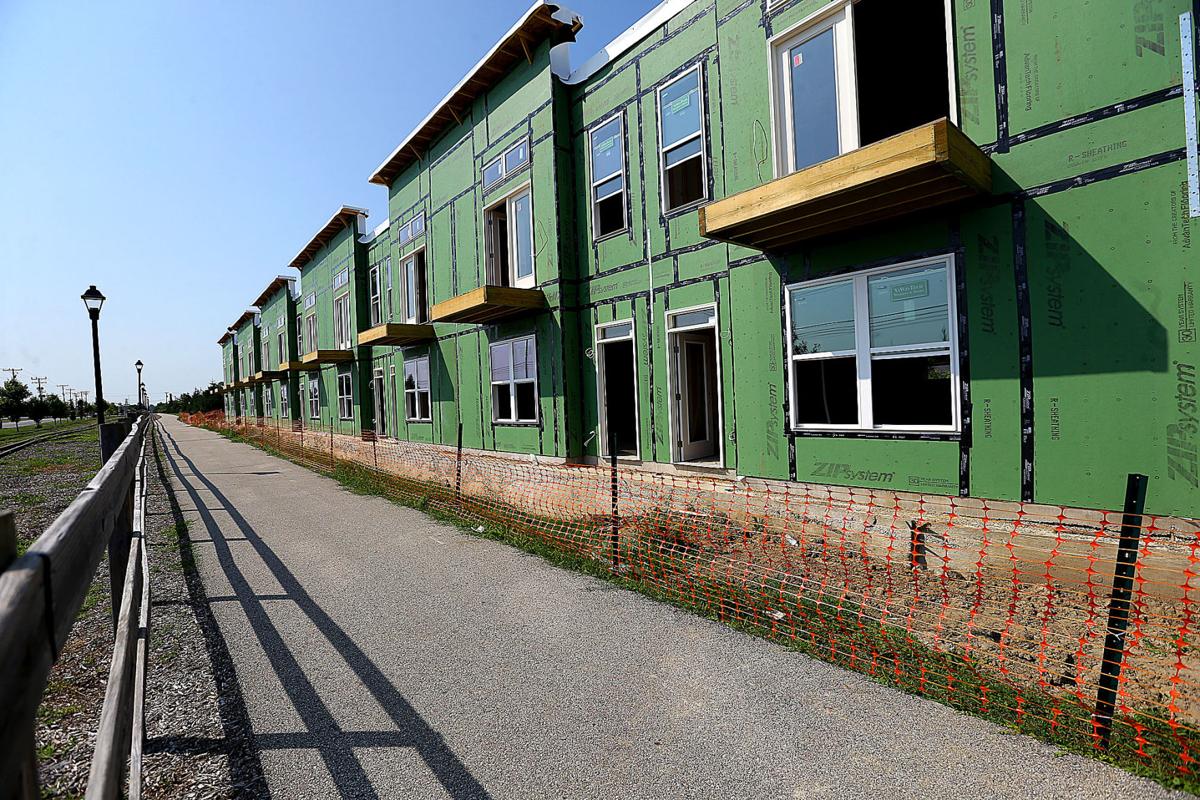 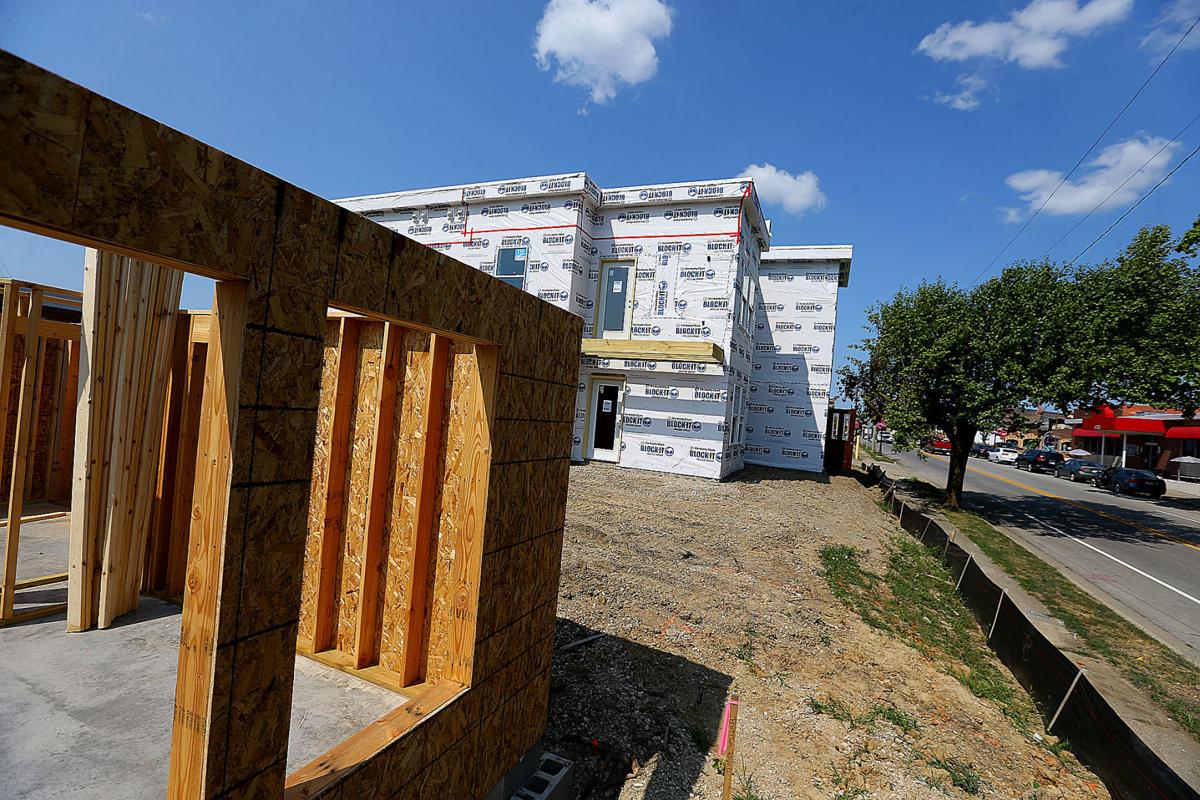 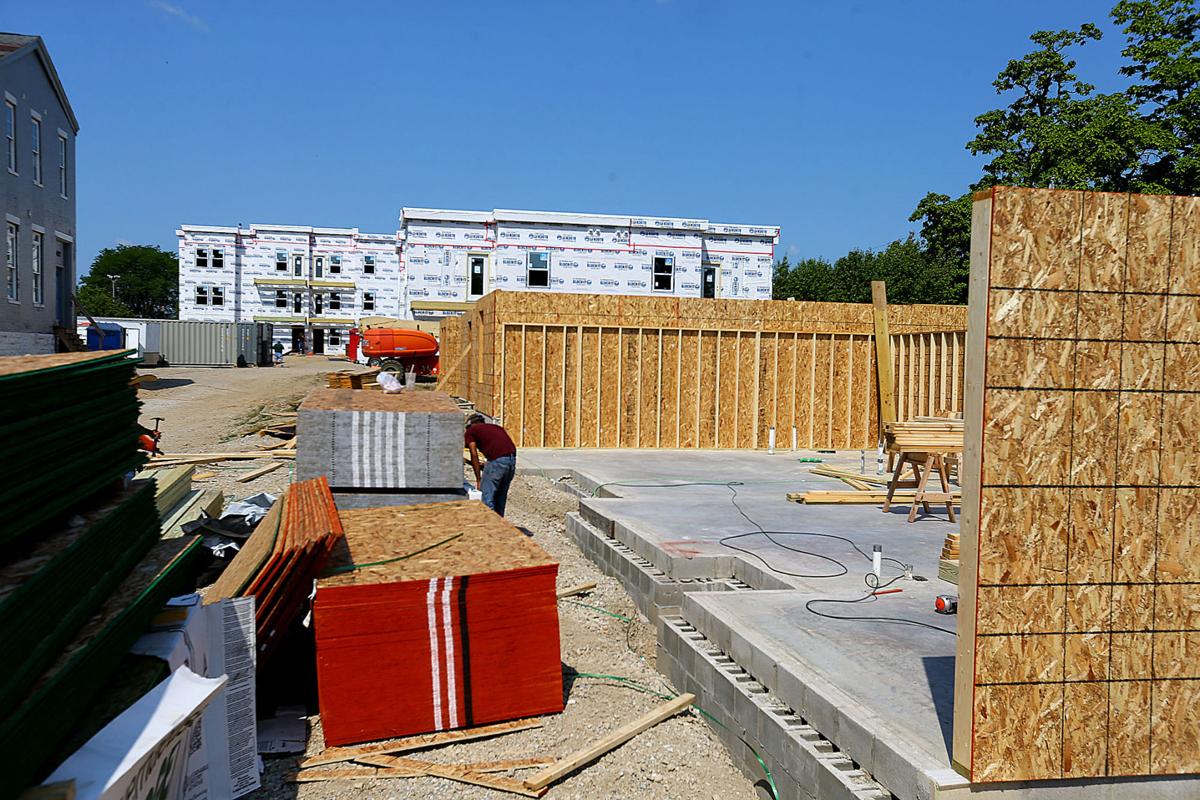 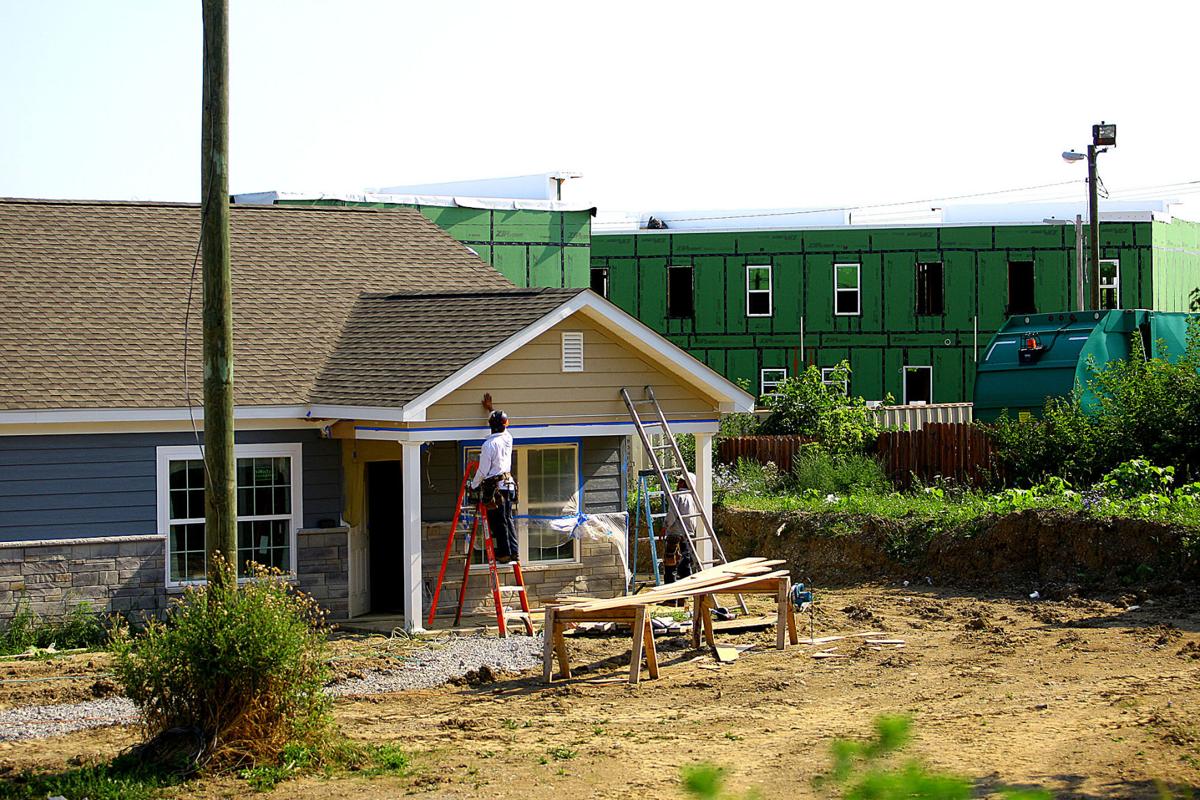 Construction on the Trail Side Townhomes can be seen near the Kokomo Humane Society on July 25, 2019.  Tim Bath | Kokomo Tribune 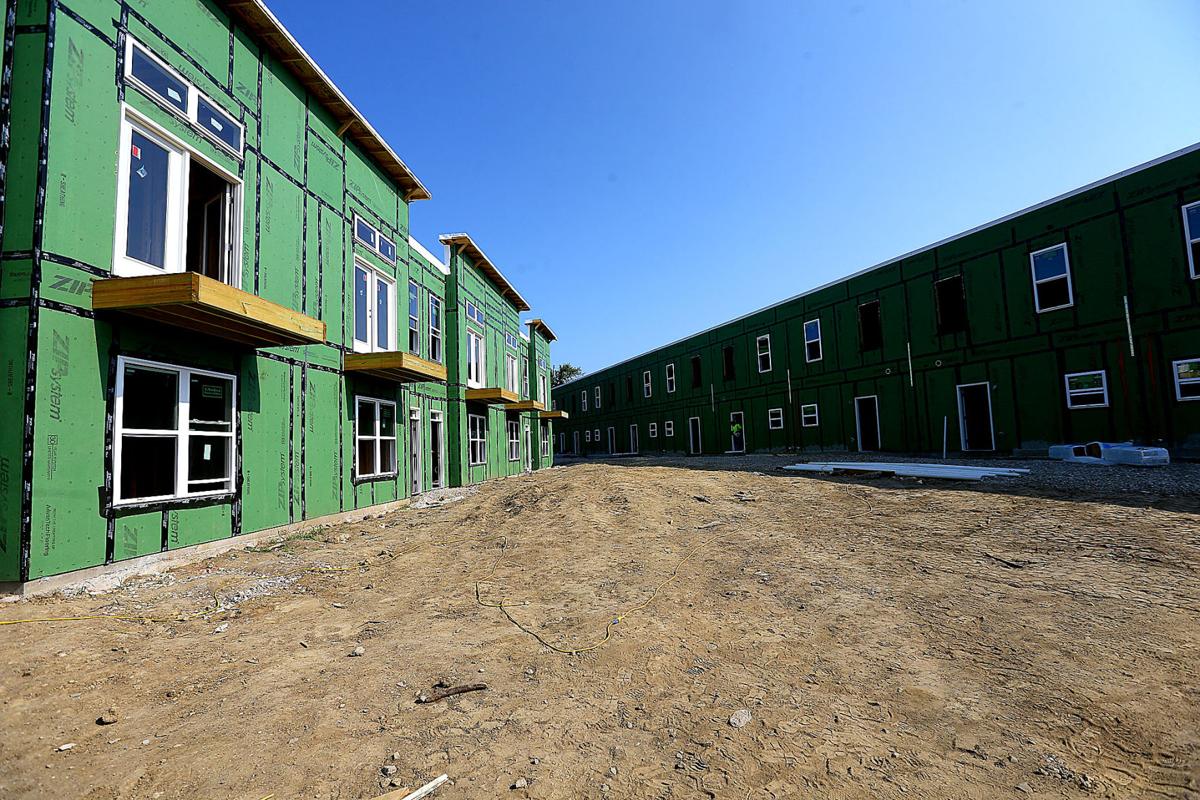 Editor’s note: This is the first of a two-part series. Next Sunday we will look at single-family home construction and the second half of our updates on 10 of Kokomo’s ongoing developments.

Kokomo in recent years has had no shortage of summer construction.

This year is no different.

Private development has sprouted throughout the city, including small restaurant projects like Panda Express at Markland Mall – expected to open in late September – and the city’s Domino’s locations, along with a substantial credit union project at the northwest corner of Dixon Road and Boulevard Street.

Work has also been present at complexes like Crestview Apartments, which is putting up a new building with eight one-bedroom apartments at the site of a former nursing home destroyed by the 2016 tornadoes, and Park Place Apartments, itself recovering from extensive tornado damage.

Rezoning was approved last month to start the process for a nearly 5-acre area slated for construction of a one-story senior living facility. It is expected to have 20 one-bedroom apartments and developers will appear before the Kokomo City Plan Commission next month for site plan approval.

And on the city’s south end is the construction of a Holiday Inn Express & Suites, a four-story building slated to open 96 rooms in the middle of September, according to the project’s developer and owner Sam Chaudhry.

“I think it’s good. The opposite of activity is inactivity, or you could even say, in the middle there, stagnation. And that’s not what you want,” said Mayor Greg Goodnight, noting developers often cite Kokomo’s proximity to Indianapolis when deciding to build in the city, along with a housing market in need of more units.

“You want economic activity. You want rebuilding, upgrading, improving. You want that to continue. … It’s an inconvenience, but it’s a positive thing.”

He added: “You have to have investment and re-investment in your community. The only alternative is for every single person to spend every amount of their income and their wealth in this city and not accept new investment, and people aren’t going to do that. … Of course you want outside money coming in and large projects taking place.”

Along with those projects are a slew of major developments – most of them housing – that have in recent years emerged into public view through government approval processes and varying degrees of construction progress.

Many will reshape the areas they are set to call home and, city officials hope, lead to ripple effects that include personal home improvements and additional private investment.

Here are updates on five developments happening, or coming soon, across Kokomo:

This project, initially set to open next spring, is now expected to be completed in the first half of 2021.

Work materials and equipment fill the site in the block between Main and Union streets, bordered by Superior Street to the north and Wildcat Creek to the south.

Project plans includes a conference center and automotive museum, along with a six-story Hilton Garden Inn that will feature 123 rooms and a public rooftop space, including a bar.

Goodnight said “as far as I know” the project is still on track for its anticipated spring 2021 opening. He remarked that he has a meeting scheduled this week related to the project.

“The only thing I’ll say is that this stuff is complicated when you get a lot of entities and multiple investors,” said Goodnight, noting the project’s developer, Dora Hospitality Group, the second one to take on the project, was in town a couple weeks ago.

Asked whether he is comfortable with where everything stands on the project, Goodnight said: “Yeah, at this point I’ve been less comfortable in things that have ended up succeeding. Trying to get this wrapped up before I’m done (his term ends).”

Goodnight, however, said the project’s funding plan is still not finalized.

“Those are the things we’re still having discussions over – over some of the bells and whistles and things,” he explained, saying measures passed by the Common Council last year are being used as his “baseline” for the city’s commitment.

That spending plan included up to $3.9 million in bonds combined with an undetermined amount of cash reserves "to advance funds for the construction of the conference center," Deputy Mayor David Tharp said at the time.

On top of that, the city said it will use cash reserves generated from a Tax Increment Financing district to fund a $2 million forgivable loan to the project’s developer.

Goodnight said he hopes financial specifics will be finalized before the end of the year.

The city has committed to spending another roughly $6.5 million in cash on a public parking garage on the northwest corner of Superior and Union streets.

Goodnight said the corner, which currently sports a parking lot for City Hall, was always planned as parking for the hotel, conference center project but that project delays allowed the city to set aside enough cash to build a four-level garage with approximately 180 spaces and 2,400 square feet of retail space on the first floor.

“The bad part is this has taken longer than before; the good side of that is it’s allowed us to keep some cash in so we can make this a bigger part of the project,” he noted, also referencing increasing costs caused in part by a tight, busy labor market and tariffs.

“We wouldn’t have had the cash to do the whole parking garage two years ago or a year-and-a-half ago.”

The project, excluding the garage, is expected to cost $29 million.

This facility, named after former Kokomo mayor and Howard County sheriff Bob Sargent, is a $7.5 million, 35-unit housing development planned as a three-story complex offered to homeless families in need of affordable housing and substance abuse and mental health treatment.

Sargent Place, which has faced pushback from neighborhood residents worried it could stigmatize the neighborhood and cause safety concerns, will include 20 two-bedroom, 10 three-bedroom and five one-bedroom units.

It will be two blocks south of Carver Community Center.

The project, which has received rezoning approval and still requires development plan approval from the Kokomo City Plan Commission, has also been approved for $2.02 million in state tax credits and federal funding.

Advantix Chief Operating Officer Tim Martin said Thursday the project is “in the preparation of plans and specifications” and in need of final local and state approvals. It is expected to be ready for construction within the next 60 days.

It is scheduled to be completed by the end of 2020; units will then be leased in 2021, noted Martin.

Both Four County Counseling Center, which offers mental health and addiction services, and Kokomo Housing Authority are considered partners in the project; case management and wraparound and support services will be available to people living in the development.

Construction is already well underway on the Trail Side Townhomes, another Advantix project. It includes 45 lease-to-purchase townhome units.

The three-bedroom townhomes are a mix of fully-accessible one-story townhomes and two-story structures near the trail, said Martin.

To assist the project, the Indiana Housing and Community Development Authority announced last year that Advantix was awarded $742,500 in Rental Housing Tax Credits.

“But depending on weather we expect to be able to start delivering units in the late third-quarter of this year,” said Martin.

This two-story structure, located at the intersection of Main and Taylor streets in downtown Kokomo, is expected to sport 14 apartment units and 3,500 square feet of commercial space by Dec. 1, according to developer Scott Pitcher.

The College Building, which was built in the early 20th century and once housed the Indiana Business College, has been under construction for weeks and will have four two-bedroom apartments with their own outer entrances on the first floor.

The second floor, protected by a new roof, will include 10 one-bedroom apartments.

Pitcher, who heads Fortune Companies, said the building is in a strong enough downtown location to also accommodate roughly half of the first floor as commercial space.

Located at the intersection of Sycamore Street and Apperson Way, this complex will be completed in stages.

The project, a $6 million, 58-unit development, has received the needed government approvals and is moving forward on construction that includes three new buildings and the restoration of a historic structure that was constructed in the early 1880s by a Civil War surgeon.

Pitcher, whose company is building the project, said two of the new buildings should be completed by year-end, while the third building should be done by the first quarter of 2020.

The project will include mostly one-bedroom apartments, with a sprinkling of two-bedroom options, and is targeting middle-income residents.