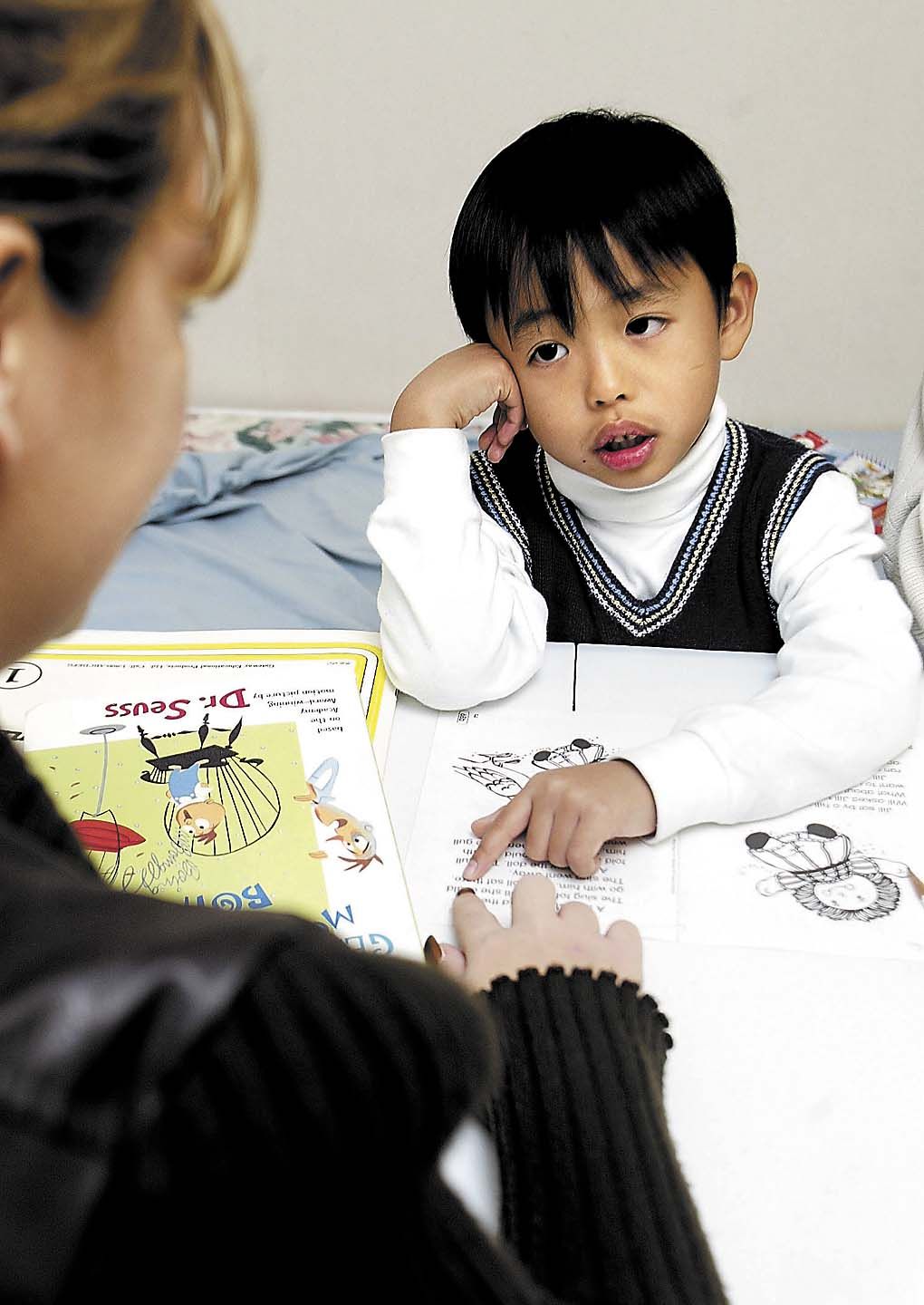 HOMEWORK HELP: First-grader Nathan Phan works on his homework with his tutor, Heather Maroney, in the back of his family’s nail salon, Star Nails in the Maple Crest Plaza. 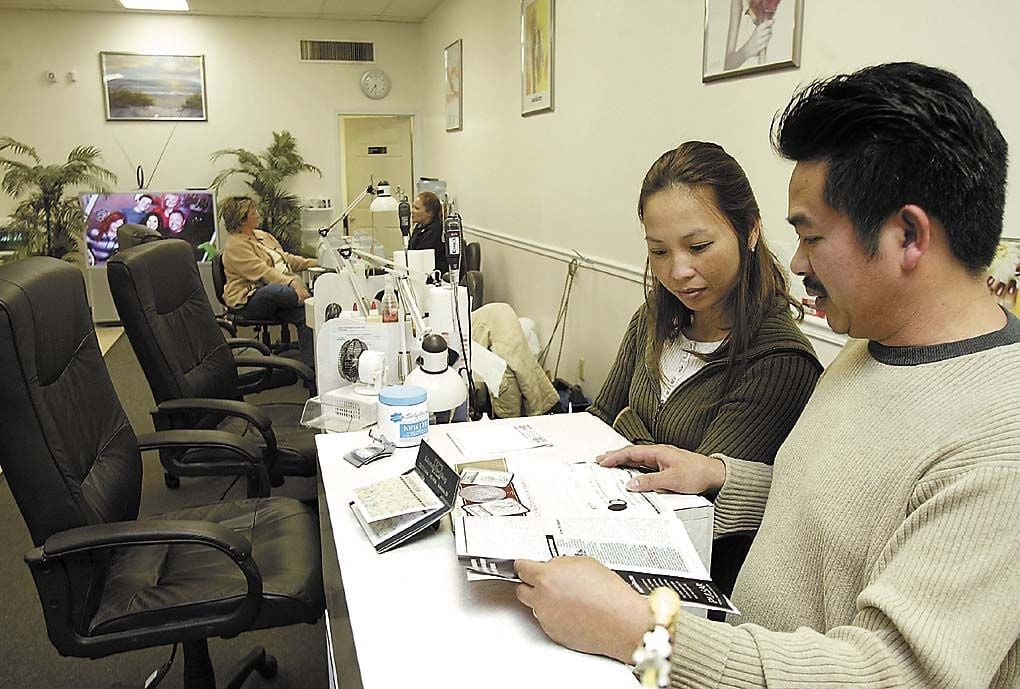 SHORT BREAK: Tina and Chris Phan flip through a magazine while waiting for customers at their nail salon, Star Nails. Chris was able to bring his family to the U.S. three years ago.

HOMEWORK HELP: First-grader Nathan Phan works on his homework with his tutor, Heather Maroney, in the back of his family’s nail salon, Star Nails in the Maple Crest Plaza.

SHORT BREAK: Tina and Chris Phan flip through a magazine while waiting for customers at their nail salon, Star Nails. Chris was able to bring his family to the U.S. three years ago.

Like generations of immigrants before him, Chris Phan came to the United States hoping to provide a better life for his family. Now a U.S. citizen, he worked for 10 years to bring his family from Vietnam to join him in the United States. He worked two jobs in Arkansas, at Tyson Food during the day and at a restaurant at night, then in a restaurant in Louisiana, before joining his father and several siblings in California. While in California, he spent a year in school earning his cosmetology license, studying long hours into the night to understand the lessons, because he was also learning English. His wife, Tina, 36, who waited for him in Vietnam, said that was a hard time. “He had to learn every night, to 2 or 3 in the morning.” Phan, 40, later earned his cosmetology license and moved to Kokomo to work in a downtown nail salon. He chose Indiana because the cost of living was lower than in California. Three years ago, he was finally able to bring his wife children Christopher, now 13, and Nathan, now 6, to the United States. The parents now own and work at Star Nails, in the Maple Crest Plaza, working long hours every day to provide a better life for their sons. Chris Phan said their children have a better chance for a good life here than in Vietnam. “It’s a very poor country. We’re lucky to come here. I hope I can do everything. I hope my sons can go to college,” Chris Phan said. “That’s why I work.” He’d like to see both boys become doctors or engineers, or work another respected profession. Christopher hopes to be a doctor, while Nathan wants to be a teacher, “so I can make no school days.” “We do everything for them to have a good life,” Tina Phan said. Chris Phan and his sons are U.S. citizens, and Tina Phan is working toward that goal. Chris Phan takes his responsibility as a citizen seriously, and makes sure to educate himself and vote. He has difficulty reading in English, so his brother translates English language newspapers for him, so he can make an informed choice. He also reads Vietnamese language newspapers. Not voting is not an option for him. “We are lucky we can vote. I have to vote.” Christopher is a seventh-grader at Western Middle School, while Nathan is a first-grader at Western Primary School. Their parents say the boys have fit in well in the Western schools, and have received extra help. Tina Phan said parent conferences are challenging because of her limited English. She’s happy, though, that her children are in better schools than are available in Vietnam. Christopher spoke a little English when he came to the United States, and said his teachers worked hard to make sure he understood his fourth-grade lessons. “They questioned me and taught me the alphabet,” he said. “They used easy words with me at first, then harder words.” The boys also are being tutored by elementary education majors from Indiana University Kokomo four days a week. Chris Phan said he asked a neighbor where to go to get extra help, and she referred him to the university. Chris Phan knew little or no English when he came to the United States. He’s learned it from talking to people. He and Tina both talk to and listen to their customers to improve their English, and say people have been patient in helping them understand. “I ask some people and they help me in everything. American people are very nice.” Tina said their boys speak much better English than their parents. “Nathan corrects me all the time,” she said with a laugh. Chris picks the boys up from school every day and brings them to the shop. While he and Tina and their employees give manicure and pedicures to their customers, the boys work with their tutors at a table in the back room. When the shop closes, the family goes home, where they enjoy cooking and eating a meal together. “We eat together for dinner and talk,” Chris Phan said. “We have some stories from the younger days, and talk to our sons.” It’s important to both parents that their children learn about their Vietnamese heritage, while being Americans. They know of few other Vietnamese people in Kokomo, but they visit others in the Vietnamese community in Indianapolis. They return to visit family from time to time, and Chris Phan said they send money to help their family there. “I never forget my roots.”