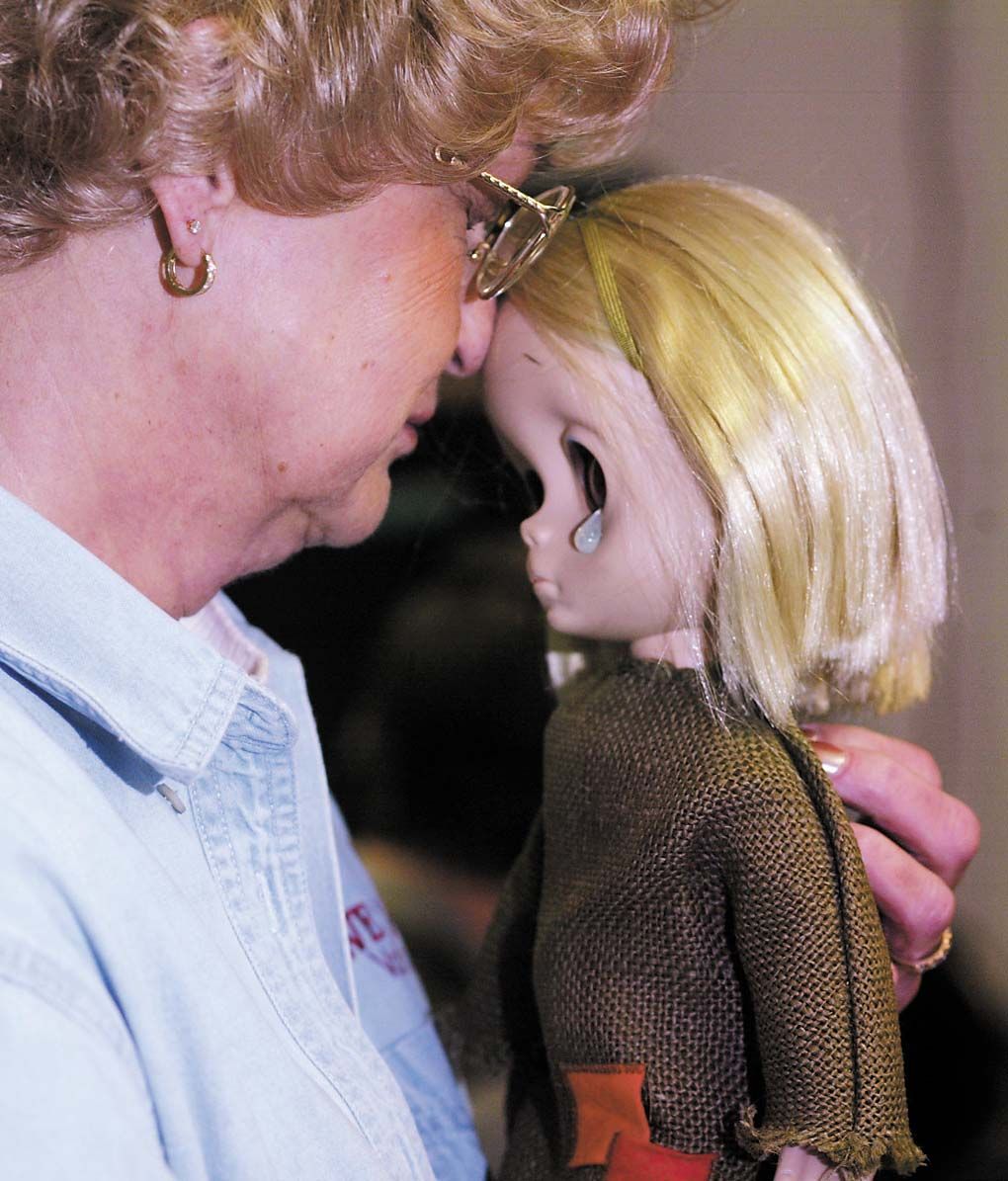 FRIENDS FOREVER: Jan Buechler shares a moment with the We Care Hope Doll at the charity’s downtown office just before the annual telethon in 2004. Jan died Thursday after a long battle with cancer. 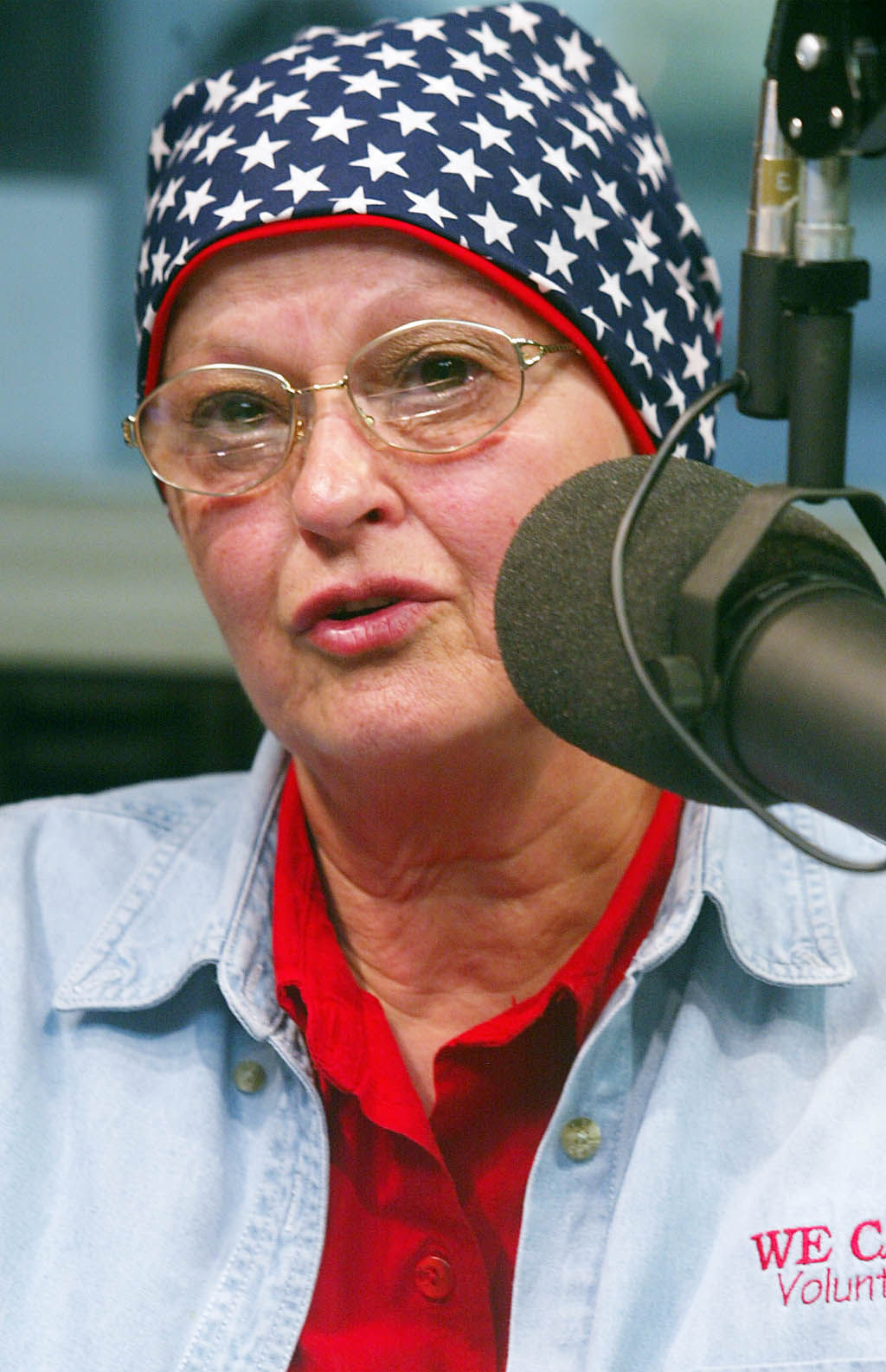 Jan Buechler talks about her battles with cancer on the WKKI radio show Mail Call as she explains why 2004 would be her last with the organization of WE Care.

FRIENDS FOREVER: Jan Buechler shares a moment with the We Care Hope Doll at the charity’s downtown office just before the annual telethon in 2004. Jan died Thursday after a long battle with cancer.

Jan Buechler talks about her battles with cancer on the WKKI radio show Mail Call as she explains why 2004 would be her last with the organization of WE Care.

When friend Erin Nowak prayed for terminally ill Jan Buechler, the latter thanked her, but reminded her to “pray for everybody who has cancer, not just me.” A devout Roman Catholic who treasured seeing the pope, Jan cherished daily Mass. Undergoing treatment, daughter Deb Hankins recalls, the cancer victim grasped her mother’s rosary in one hand. In the other was a statue of a cross-laden Christ, a reminder “he was carrying her cross.” Affectionately known as simply “We Care Jan,” the woman who helped bring Christmas to thousands, died in the presence of loved ones early Thursday. While cancer stole her from the community, it couldn’t dim her faith nor rob her of We Care connections. Buechler’s beginnings Jan was born in South Dakota on June 15, 1943. She and Marvin were wed June 25, 1966. Infant son Michael passed away June 14, 1974. He was laid to rest in that state, next to the plot where his mother’s remains will repose in a short while. The Buechlers moved to Indiana in 1971. Weaving in and out of consciousness Wednesday, Jan asked Hankins what day it was. “You know tomorrow is your birthday,” the daughter said softly, recalling that at that moment, “I could see a little tear coming out of her eye,” Hankins said, sure Jan knew it was the anniversary of Michael’s passing. WWKI personality and We Care participant Tammy Lively learned of Buechler’s passing Thursday when she called to wish her friend a happy 63rd birthday. “She fought hard,” Lively said, preparing to attend a Relay for Life meeting later that day. After her diagnosis with lung and brain cancer in April 2004, Jan asked Lively to form a radio station team for the American Cancer Society Relay for Life fund-raiser, a 24-hour event beginning at 6 p.m. today. Jan offered moral support at last year’s event, Lively said, as battling the illness and raising awareness to aid other victims was paramount to her. Cancer claimed Jan’s siblings Ellen Dempsey, Tom Willmott and Myrna McCulloch, all at the age of 70. When Jan learned of her disease, she didn’t tell her daughter, who was planning an upcoming wedding, that she was only given four to six months to live at that time. Hankins mused her mother likely prayed “I hope I make it.” Jan’s life was filled with plans; her 2005 trip to Vatican City, the series of We Care telethons. Nowak said the two even discussed last Friday a garage sale. Those close to her agree Jan’s life focused on caring; “doing for others ... giving and loving ... thinking of them,” Hankins said. She might undergo a full radiation treatment, then come in and open the We Care store. And to help ensure the charity would go on to help others, Jan helped establish the Hope Fund. Faith vital “She knew she had thousands of people praying for her,” Hankins said, assured this greatly comforted her. “If I learned anything from her, it was never give up,” said nurse Nowak, who tended to friend Jan. Given a time frame of life expectancy, “she beat it by about two years,” Nowak said. Friend Dorothy Surface accompanied Jan and the Rev. Randy Soto of St. Patrick Catholic Church to Rome. “As a faithful Catholic,” Soto said earlier, “she didn’t want to die without seeing the pope.” “Her faith was her main thing,” Nowak continued, professing her friend’s love of daily Mass. We Care contribution Jan was well known for her devotion and dedication to We Care, a local charity benefiting The Salvation Army, the Kokomo Rescue Mission, Bona Vista and Goodfellows. The charity’s annual telethon is conducted at the downtown radio station. “She did so much work behind the scene,” Nowak said, “the extra stuff people don’t realize.”Surface said she met Jan and got involved in We Care as Jan’s enthusiasm, well, “it was kind of contagious. “She was very gung ho; she knew what needed to be done,” and made sure it got done, Surface continued. Jan worked tirelessly, Surface continued, often late into the night. And through it all, she persevered as she was continually “caring about others ... she wanted to help others.” And when it comes to We Care — a legacy which Jan can lay claim — “I don’t think the community will ever let it die,” Surface said. “She impressed me as a very bright individual,” said Charlie Cropper. He and the late Dick Bronson were enmeshed in the then-fledgling We Care drive when Jan first stepped in to help more than three decades ago.When she dedicated herself to a cause, Cropper said, “she’s put her nose to the grindstone and stuck to it. “She lived it, she breathed it, she was consumed by We Care,” the WWKI personality said. “We Care was her passion, her baby. It was on her mind every day.” And when she presided over her last telethon in 2004, it was perhaps the hardest thing she ever did, Cropper mused reflectively. “We Care is going to be Jan’s legacy,” Cropper said. “As long as We Care is around, Jan will still be there.” Tom Carey may be reached at (765) 454-8560 or via e-mail at tom.carey@kokomotribune.com