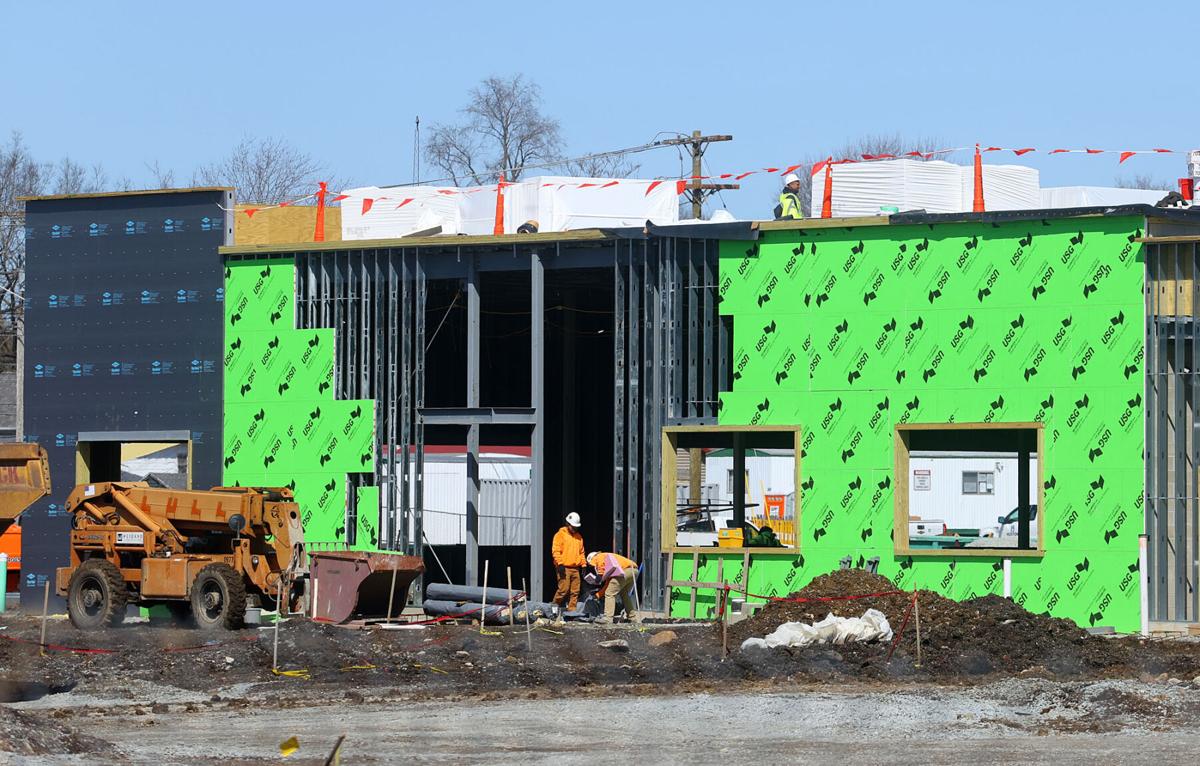 Crews work on construction of the Miami County YMCA in this photo from March 19. 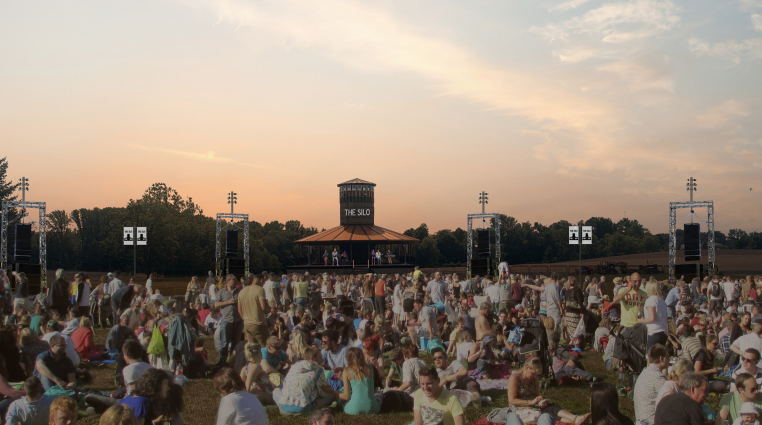 An artist’s rendering of the Silo Concert Center is shown. 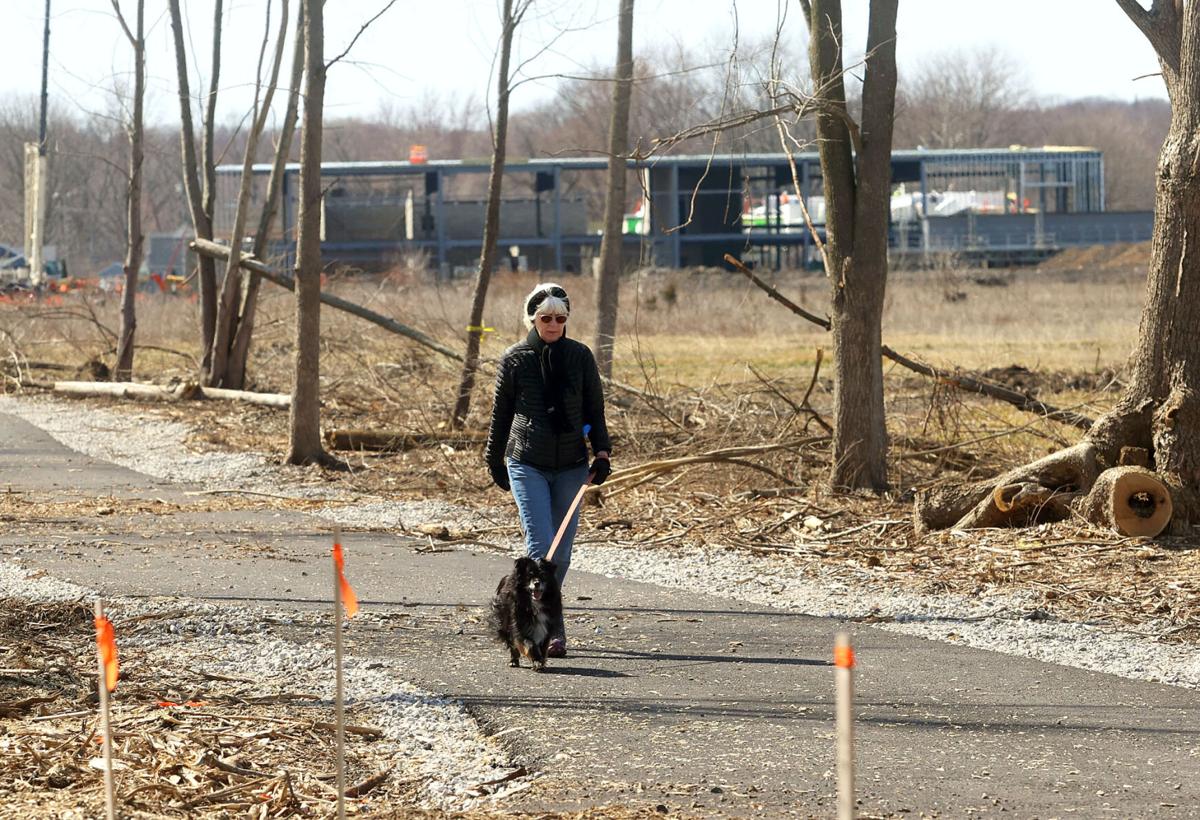 Kathy Calderbank walks her dog, Beau, along the Nickel Plate Trail extension March 19. The new Miami County YMCA can be seen behind Calderbank.

PERU — Miami County is asking for $8.45 million as part of a regional grant project to help fund two major housing development projects in Peru and a new concert venue just north of the city.

The projects are listed in the READI grant submitted by North Central Indiana Regional Planning Council, which consists of officials from Howard, Tipton, Miami, Cass, Clinton and Fulton counties.

Miami County listed a total of five local projects that officials say would benefit the entire six-county region. Those projects represent a more than $189 million investment in the community.

Jim Tidd, executive director of the Miami County Economic Development Authority, said the chance to get the funding is a once-in-a-lifetime opportunity for the county and city to complete some of the biggest development projects proposed in decades.

Here are a list of the projects and the funding required to complete them:

The city is seeking $4 million to fund infrastructure upgrades near the intersection of North Broadway and U.S. 24 to attract new developments such as a hotel, hospital campus, commercial district and 85 new homes.

Tidd said a feasibility study on building a hotel showed it would help fill the need for more lodging in the region, and the city has attracted a developer to do the project.

According to the grant, the city is also working with a provider to develop a 9-acre hospital campus on the north end of the site to help fill a service need within the community.

The proposal also calls for a 30,000-square-foot commercial district adjacent to the hotel to support local entrepreneurs.

Twenty-eight acres would be used to build approximately 85 new single-family homes. The goal is to provide the homes at market rate with a variety of options for first-time home buyers, as well as seasoned homeowners from within and outside of the region, according to the grant.

By providing extensions to streets, sewer systems, water and storm-water infrastructures, the city hopes to capture a major quality-of-life development that will see a $50 million investment into the community.

Tidd said they hope to know in the coming months which specific developers are interested in building there.

“Right now, it’s more of a concept, but we think that area is going to develop here very soon,” he said.

With construction of the new Miami County YMCA nearing completion and a trail extension connecting downtown Peru to the Nickel Plate Trail, this development located along the Wabash River is already well underway.

According to the grant, the re-envisioned riverfront development will attract young talent to the area through improved quality-of-life amenities and housing that will allow entry-level, working-class residents to live and work in Peru.

The development proposal also calls for expanded recreational facilities — including a splash pad and sports fields — at the site.

Tidd said the county has already provided $1.2 million in assistance to help build the new Y and trail extension and plans to give another $2 million in TIF funding over a period of time to the developer of the housing project.

He said MCEDA has been negotiating with a housing developer and hopes to get the project finalized in the next few weeks.

Russ Bellar is developing the site, which currently has a large stage surrounding a silo-like building. The money would help pay to extend water and sewer lines a mile from Peru to allow the venue to host up to 25,000 people for events.

According to the grant, the water and sewer upgrades would allow the venue to host larger events by providing the required restrooms and water access to legally operate.

“A venue of this size would act as a truly national attraction by hosting big-name headliners and hosting music festivals,” the grant says. “This will be a defining quality of place amenity for the region that will attract young families to the area and improve the overall quality of life for residents of the region.”

Two improvements are proposed at Grissom Air Museum that would cost in total of $1 million, which would be funded by $500,000 in local investment and $500,000 from the READI grant.

The first improvement is the construction of the Hustler Hutt to house the exhibit featuring the TB-58A Hustler.

The world’s first supersonic bomber, the Hustler was based at Bunker Hill-Grissom Air Force Base during the Cold War. The air museum has done its best to preserve the bomber but it has sat outdoors since 1969.

The museum first announced the project in May 2019 and has been raising funds ever since. According to the grant, the exhibit will not only protect the aircraft, but also create an exhibit that will become a national draw.

The second improvement is the development of an RV and camping area adjacent to the museum called FAMCamp, which would provide accommodations for a variety of RV and camping options for families looking to visit the museum.

MCEDA is asking for $750,000 in grant money to help fund a $79.5 million repair project on the tarmac of the runway at Grissom Air Reserve Base to support three major businesses located nearby.

When the base realigned as a reserve base in 1994, MCEDA was able to capture nearly 1.2 million square feet of aircraft tarmac to help support the economic redevelopment of the area.

Now, the tarmac there supports operations of the recent businesses brought to the site, including Arizona Isotopes, Dean Baldwin Painting and a new air cargo operator.

In order to continue to operate successfully and attract new businesses, there is a need to rebuild and repair the existing tarmac, according to the grant.

The improvements will allow the former air force base to attract new businesses, bringing in more high-paying job opportunities that will attract talent to the area and serve as a catalyst for economic growth throughout the region, the grant says.