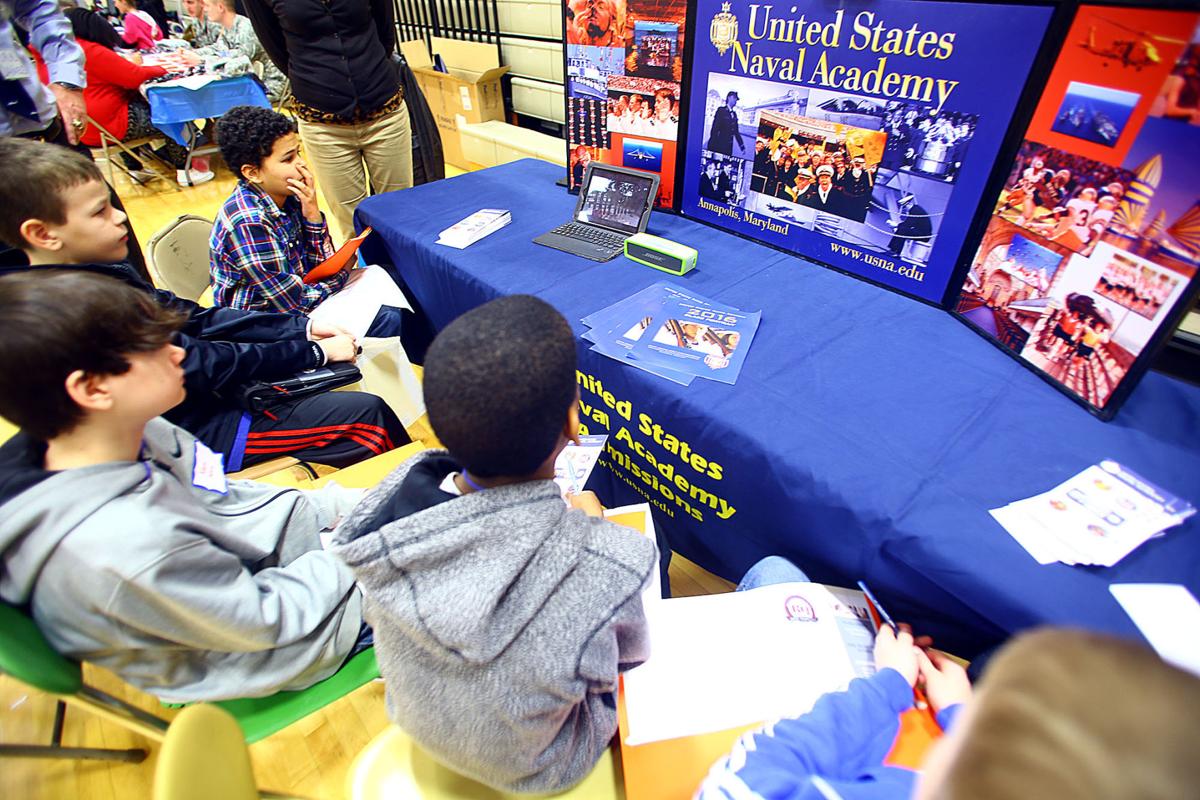 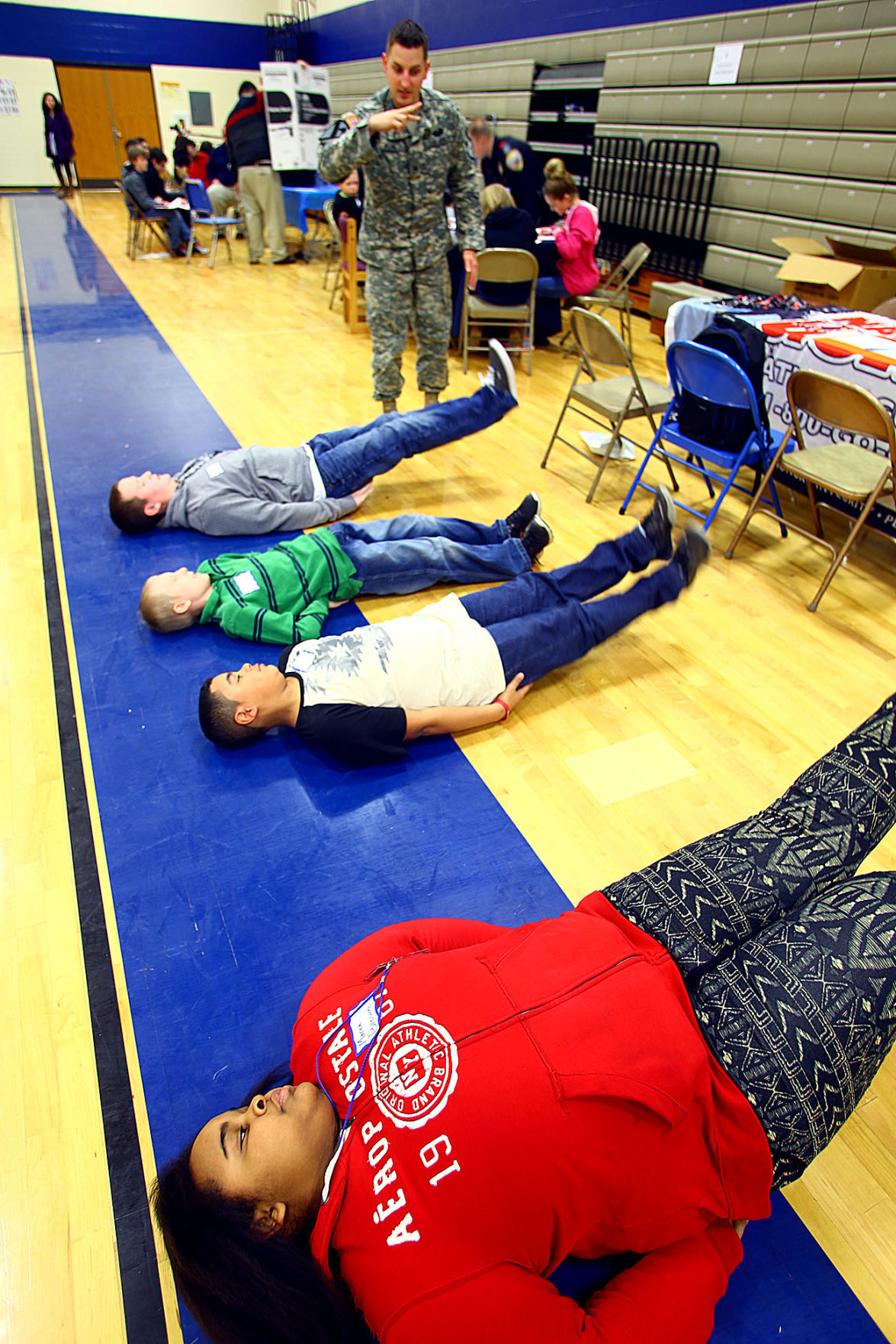 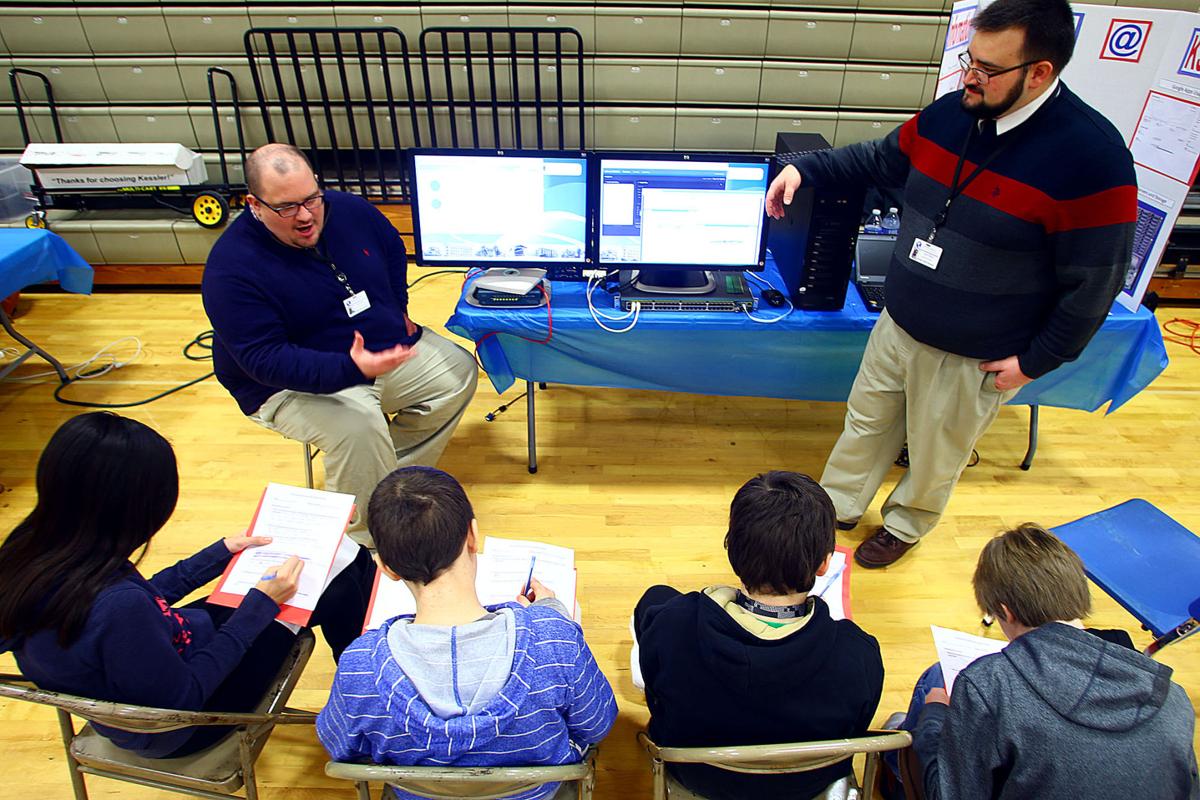 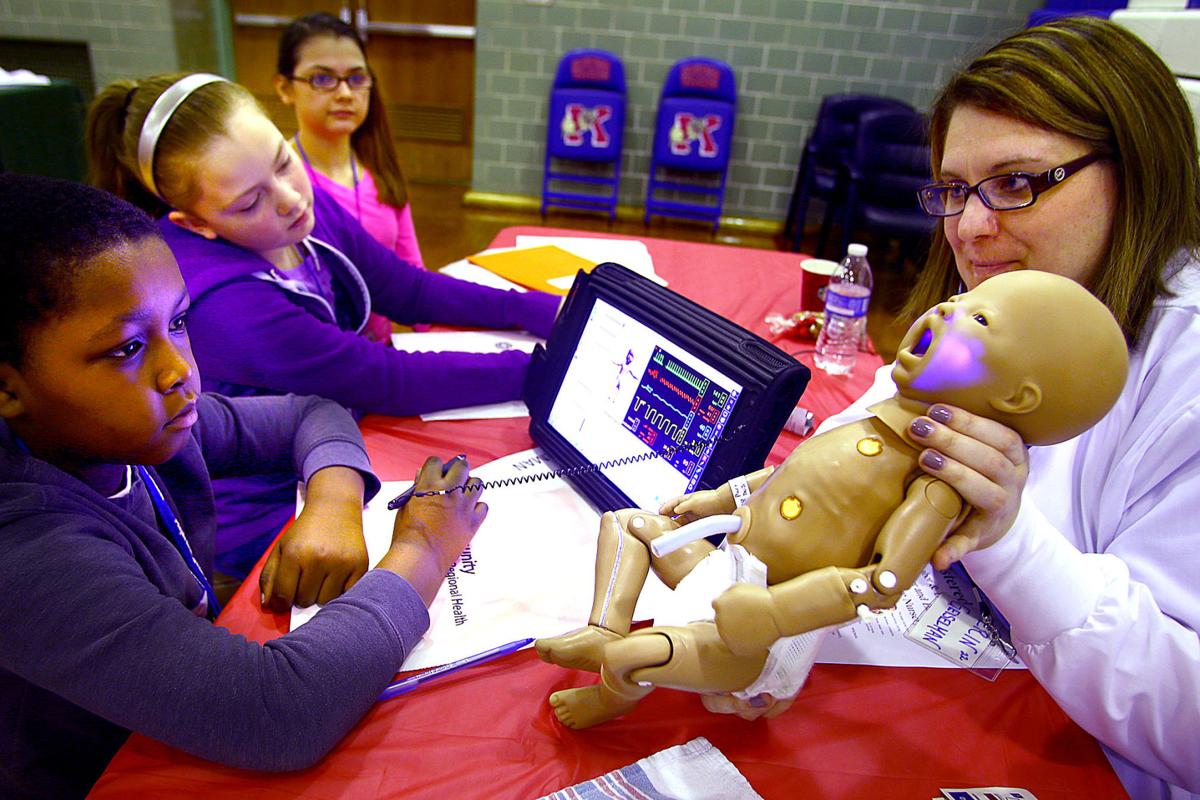 Maple Crest Middle schoolers spent the morning visiting with representatives from different careers during their first STEM career fair on Friday, Jan. 23, 2015. Jawuan Butler plays with the controls for a trainer baby that nurse Erin Geiselman used to talk about being a nurse. Tim Bath | Kokomo Tribune

Maple Crest Middle schoolers spent the morning visiting with representatives from different careers during their first STEM career fair on Friday, Jan. 23, 2015. Jawuan Butler plays with the controls for a trainer baby that nurse Erin Geiselman used to talk about being a nurse. Tim Bath | Kokomo Tribune

Maple Crest Middle School sixth graders got a glimpse into their potential futures Friday as they learned more about career opportunities within science, technology, engineering and math (STEM) fields.

Thirty-nine local professionals participated in the school’s first ever STEM career fair. Students got to see a police officer’s radar gun up close, play with the putty occupational therapists use for strengthening exercises and learn how to study ecosystems, among many other hands-on opportunities.

“My hope is that the light comes on and this is an area they’d like to go into and then they have something to focus on,” said Vicki Boles, a health teacher at Maple Crest who coordinated the career fair. “Sixth grade is young, but it’s always good to have a goal.”

Student Makenzie Burthay found out she’s interested in a career in occupational therapy, though the long hours that come with athletic training did not appeal to her.

“I thought [occupational therapy] sounded fun because you can help people and kids get better if they have something wrong,” Burthay said, adding the career fair was helping her figure out what she wants to be when she grows up.

Maple Crest’s 165 sixth graders selected three careers they thought they would be interested in, and Boles added two additional options to their lists. Students rotated to different tables set up in the gyms for brief presentations from professionals in each career.

“If they were leaning toward educational fields, I tried to go with insurance or CEO of a bank,” Boles said. “I tried to bring some diversity.”

Bronson Smith, a sixth grader, was interested in Brandon Pitcher’s “Go Green!” presentation on environmental science and mushroom farming as a way to turn waste into commodities and jobs.

“It was pretty cool [to learn] you can go all different places to feed people,” Smith said after Pitcher’s explanation of how mushroom farming could provide enough jobs and produce to feed the world. “You grow in one area and ship it all over.”

Students filled out worksheets on every career they learned about, and they’ll write a reflective paper on the overall experience. The career fair is an important part of Maple Crest’s progress in becoming a STEM-certified school, Boles said, and it incorporated Indiana’s academic standards. Kokomo School Corp.’s education foundation granted funds for the fair, and several businesses made donations.

“All their different classes touch on STEM, so this is an opportunity to meet people in the community, start some collaborations and learn about careers they may be interested in,” Boles said.

Kendra Cline was interested in learning about psychology, so she sat down with Jeffery Batis, an associate professor of psychology at Indiana University Kokomo. Cline recognized the importance of gathering information on potential careers so early in school.

“It’s so you don’t just go to college and have no idea what you want to do,” she said.