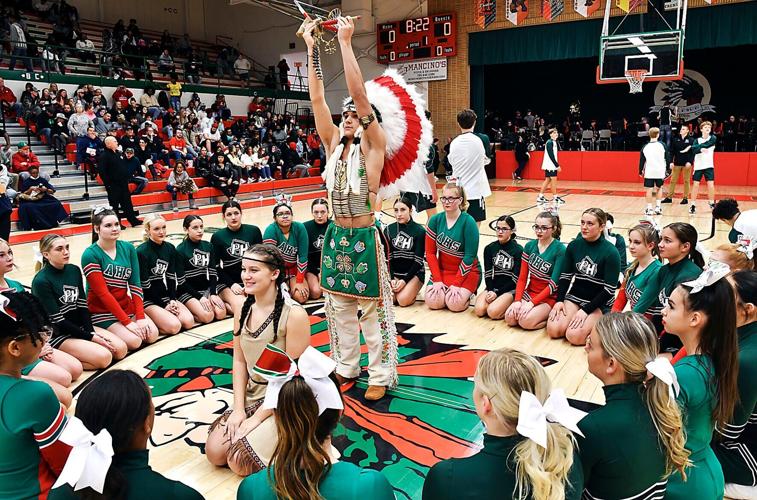 The Anderson High School Indian mascot offers up the peace pipe to those gathered around during pre-game ceremonies for the kickoff of high school boys basketball. 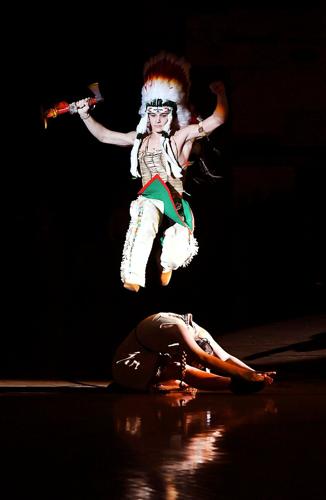 The Anderson High School Indian mascot offers up the peace pipe to those gathered around during pre-game ceremonies for the kickoff of high school boys basketball.

ANDERSON — The Anderson Community Schools board’s decision to end the high school basketball pregame routine involving the school’s Indian mascot and maiden opens a new front in the district’s efforts to navigate an issue that has been at the center of a larger nationwide discussion over the use of Native American imagery and ceremony.

“Traditions are a continuum,” ACS Superintendent Dr. Joe Cronk said after Tuesday’s meeting. “They never have a beginning and they never have an end. They started sometime back in the 1870s and they continue through today. They change over time.”

Judging from reaction throughout the community to Cronk’s recommendations and the board’s adoption of them, some may find it more difficult than others to see those traditions evolve.

“I absolutely believe they went too far,” said Meghann Ancil, a 2007 Anderson High School graduate. “This has been tradition for as long as I can remember and it really saddens me to see it taken away.”

Others who believe the board’s action — which includes continuing conversations with Chief Brad KillsCrow of the Delaware Tribe of Indians — falls short of what is needed said a key issue is what, exactly, represents a misappropriation of tribal culture.

“Anderson High School’s mascot, maiden, pipe ceremony and tribal dance playing a part in the basketball team’s pregame warmup perpetuates stereotypes of Native Americans and appropriates holy objects and rituals that are sacred to the Delaware tribe,” Angie Strickler, representing Madison County Standing Up for Racial Equity (SURE), told the board. “These objects and rituals do not belong to us, and we have no right to use them for our athletic or school-related endeavors.”

ACS officials expressed optimism that work toward a formal partnership with the Delaware tribe would result in opportunities to provide updated material for course work in classes throughout the district, as well as an updated educational display at the high school. Cronk has in the past also mentioned possibly welcoming Delaware tribe members to visit schools throughout the district in the fall, when the Andersontown Powwow is normally scheduled.

“Our partnership that we’re working towards with the Delaware Tribe of Indians is unique, I think, because we are aware of what our history was, and we seek to honor that,” Cronk said. “We always seek to honor it, and if what we do isn’t honoring, we change it.”

When those changes happen, however, some wonder what might get lost.

“Anderson has always been known for the Wigwam basketball games,” Ancil said. “Now they no longer have any of that. Those games won’t be the same without the mascot or the pregame dance to get the crowd hyped up.”

Other groups are vowing to continue holding ACS accountable when it comes to making what they see as meaningful, constructive changes and continuing to have positive dialogue with the Delaware tribe and other Native American groups.

“We’re not going to compromise on this,” said Rachel Thunder, director of the American Indian Movement’s Indiana and Kentucky chapter. “We aren’t going to stop holding them accountable until we see a shift in their native mascots and imagery. They need to catch up with the times.”

What will change, what won't