PERU – Ice skating, wagon rides, wiener dog races and reindeer. Add them all together – and throw in some bratwurst, beer and sauerkraut for good measure – and you’ve got a one-of-kind festival that’s set to hit downtown Peru this weekend. 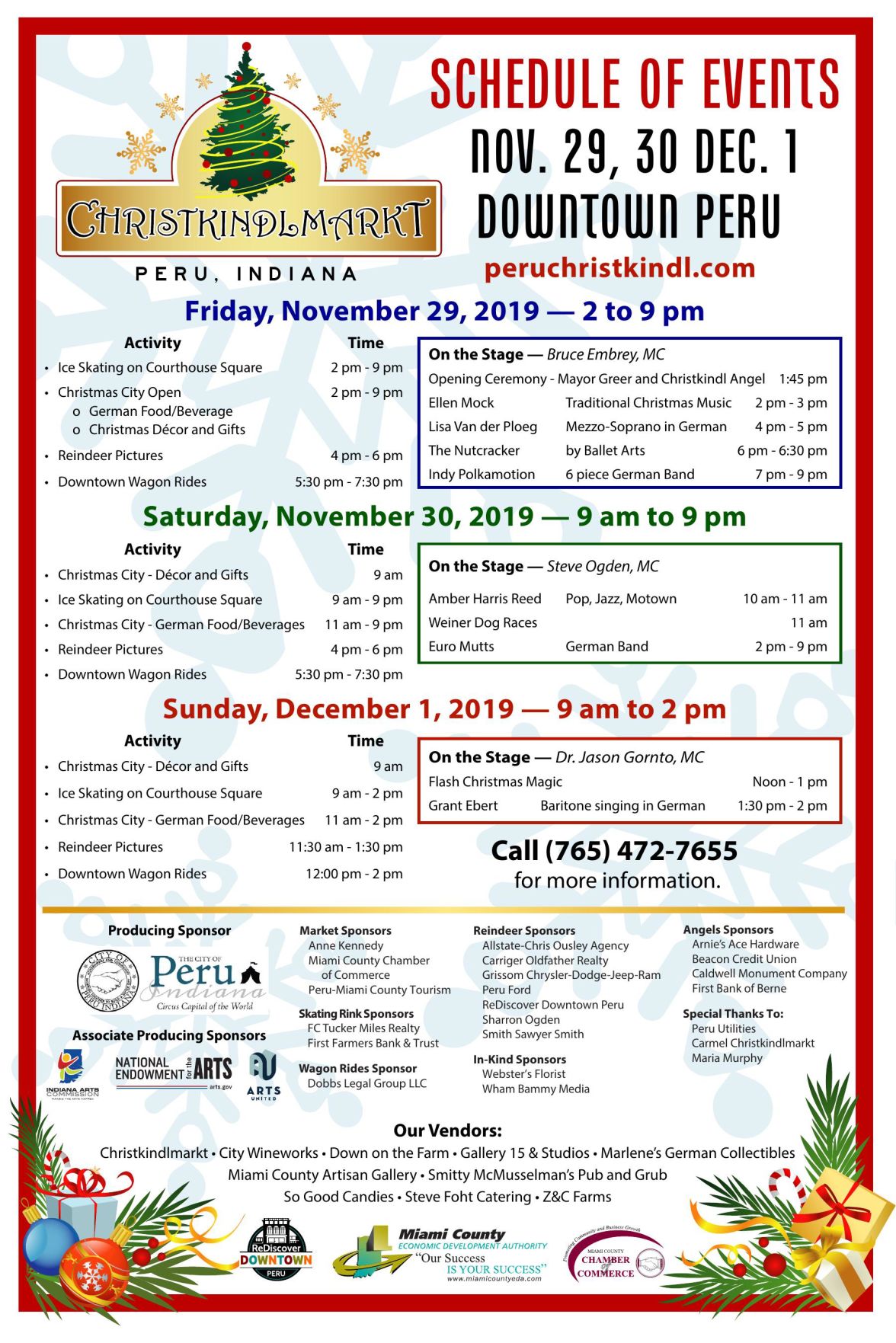 The city’s first-ever Christkindlmarkt kicks off at 2 p.m. Friday and runs through Sunday, offering a unique, hodgepodge assortment of events that all celebrate Peru’s deep German heritage.

Christkindlmarkts originated in Germany but are now being held in cities around the world, including a massive, 6-week market in Carmel.

Vicki Draper, a member of the nonprofit ReDiscover Downtown Peru, said the group’s new festival will transform the area around the courthouse square into a winter market with German-themed foods, drinks, crafts, music and dancing. Some of the activities you can’t even find at Carmel’s event.

That includes horse-drawn wagon rides around the city to look at the Christmas lights and a photo-op with a real, live reindeer.

“That’s going to be a popular thing with the kids,” Draper said.

One of the most anticipated activities will be ice skating on a temporary rink, with a synthetic surface, that will be installed in the parking lot at the corner of Main and Court streets. People can bring their own ice skates, or rent a pair for $5.

To warm up, German beer will be on hand, along with a hot, spiced wine called Glütwein. A slew of local vendors will also be on hand selling their wares, including one booth that will sell traditional handcrafted items such as nutcrackers, smokers and ornaments.

Live music will fill the downtown throughout the entire festival, as both local performers and German bands from around the Midwest take to the stage for free concerts.

Other entertainment includes a wiener dog race at 11 a.m. Saturday. Draper said there are currently 10 entrants, but people can register their wiener dog for the race up until 15 minutes before the event.

The three-day festival will be the second largest event in Peru, next to the annual week-long Circus City Festival, Draper said. At the same time, it will be the only Christkindlmarkt in north central Indiana, and only 1 of 3 German markets in the state.

Draper said organizers hope the uniqueness of the event and the slew of unique activities draws a big crowd to Peru’s core this weekend.

“We want to get people downtown to enjoy Christmas,” she said. “It’s a unique event for Peru and for the entire area. We really think this is going to be something that people don’t want to miss.”

The event received a funding boost from the Indiana Arts Commission, which awarded the festival a $4,750 grant to the Miami County Economic Development Authority. Other funding came from the City of Peru, nonprofit groups and local businesses.

Draper said the Peru event was organized and created in part with the help of volunteers from Carmel’s Christkindlmarkt.

A taste of Germany: Crowds show up for Peru's first Christkindlmarkt festival