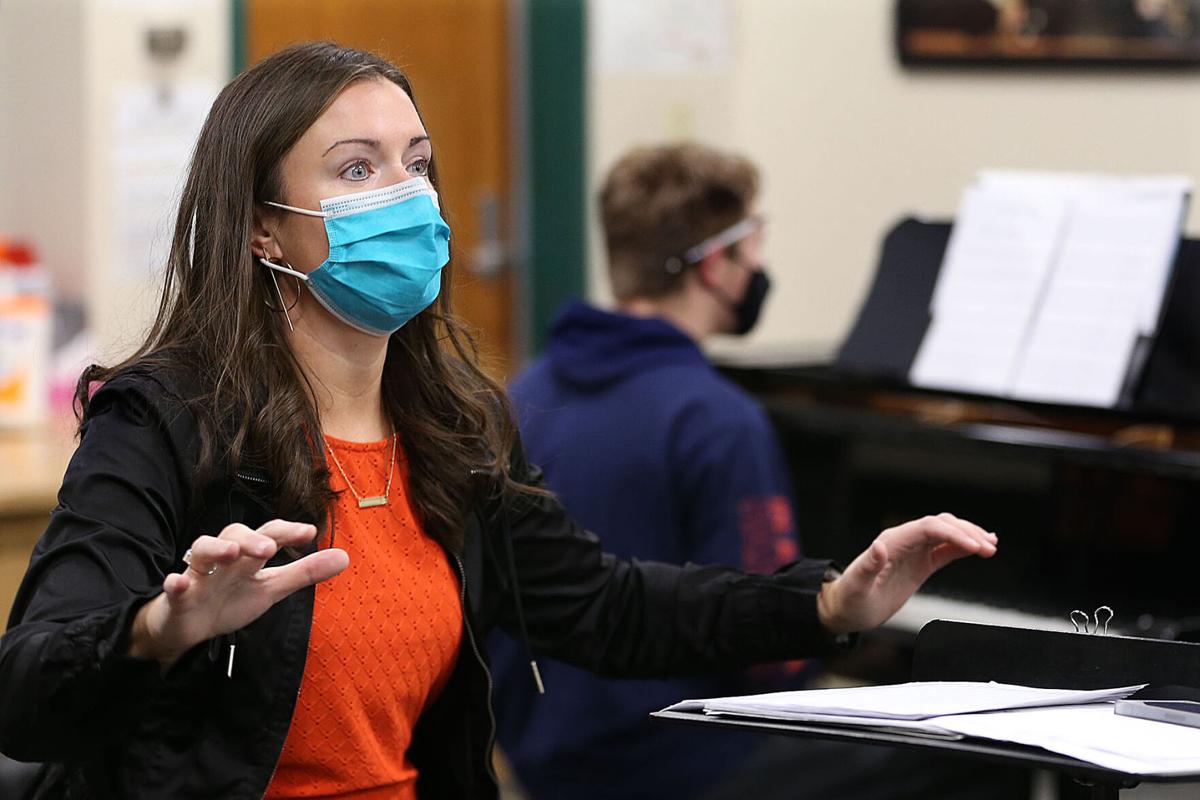 Kokomo native and Noblesville High School Jazz Band Director Bethany Robinson is a top 10 finalist for the Grammy Music Educator Award. Robinson is among 1,100 nominees for the award. 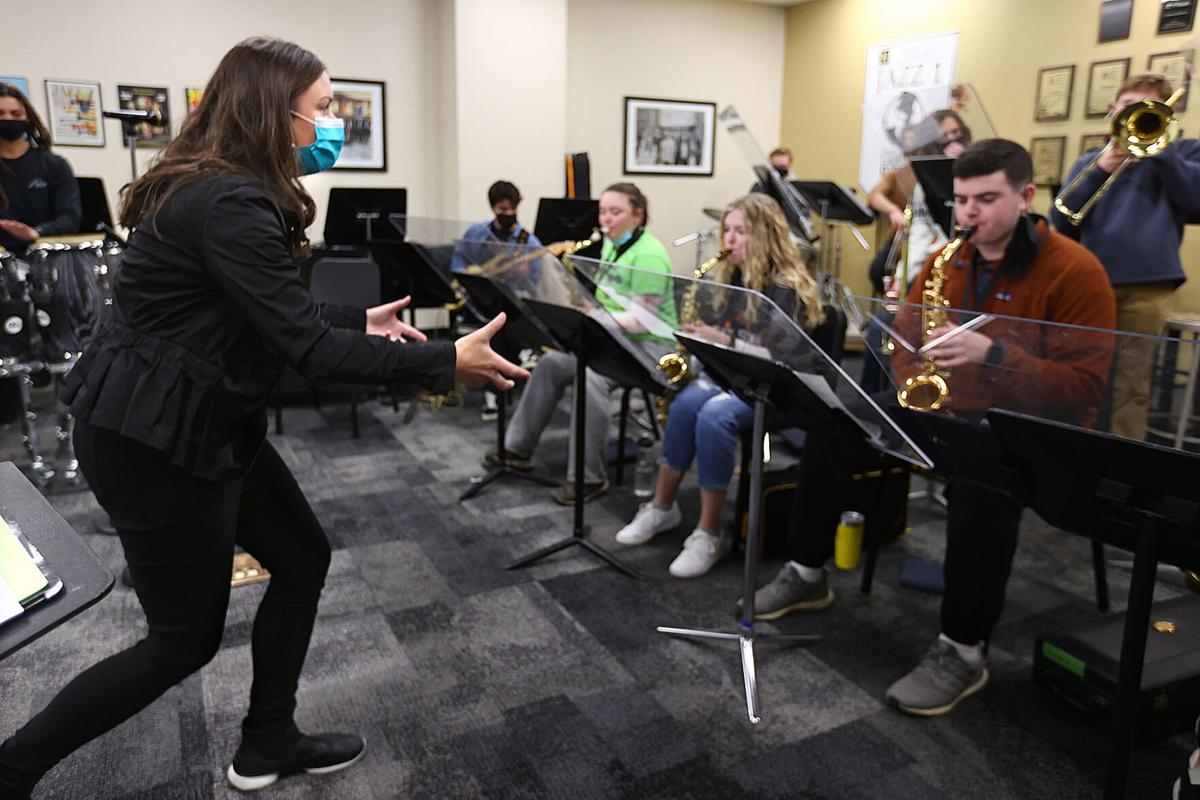 Bethany Robinson leads one of Noblesville High School’s jazz bands through a rehearsal on Tuesday. Robinson has spent her entire teaching career at NHS, growing the jazz program from one band to five. There are more than 100 students in the jazz program. 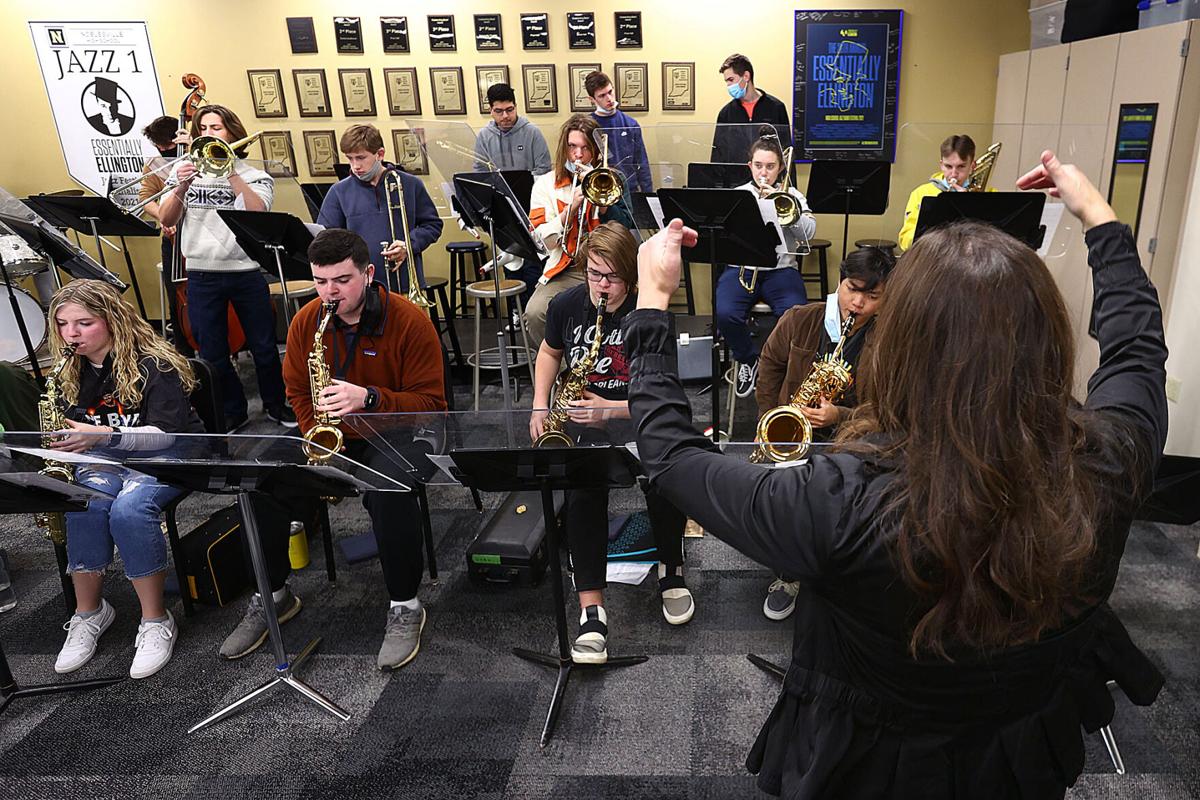 Bethany Robinson leads one of Noblesville High School’s five jazz bands in a rehearsal on Tuesday. Robinson is the director of the high school’s jazz program as well as the assistant band director. She is originally from Kokomo.

Kokomo native and Noblesville High School Jazz Band Director Bethany Robinson is a top 10 finalist for the Grammy Music Educator Award. Robinson is among 1,100 nominees for the award.

Bethany Robinson leads one of Noblesville High School’s jazz bands through a rehearsal on Tuesday. Robinson has spent her entire teaching career at NHS, growing the jazz program from one band to five. There are more than 100 students in the jazz program.

Bethany Robinson leads one of Noblesville High School’s five jazz bands in a rehearsal on Tuesday. Robinson is the director of the high school’s jazz program as well as the assistant band director. She is originally from Kokomo.

A couple of trumpet players said they could use a little more time. Tuesday was the first day back from semester break for Noblesville students.

The jazz band took it from the top.

The next song began with a bass solo. As the bass player lead into the song, he misplayed a note.

“My bad,” he said, and went right on playing, the rest of the jazz joining in on cue.

As jazz band director, Robinson wants her students to be able to give input and try, fail and try again. It’s the only way to make students comfortable expressing their unique personalities.

Robinson oversees about 110 students in total, while also serving as assistant band director. In her 17th year at Noblesville, the Kokomo native and Kokomo High School grad has seen the jazz program grow from just one band into five.

“Every year there is more interest,” Robinson said. “Kids are excited about it.”

It’s a testament to Robinson as a teacher — and one that hasn’t gone unnoticed.

Robinson is a finalist for the 2022 Grammy Music Educator Award. One of over 1,100 nominees, the Noblesville teacher has made it to the final 10.

The top 10 were revealed during “CBS Mornings” on Dec. 14. Robinson’s name was read on national television.

“I felt like I was blacking out,” she said. “Nothing prepares you for that level of recognition.”

Robinson’s former teachers aren’t surprised, though. They saw early the potential of a student whose desire to learn was unmatched.

“She has a voracious appetite for learning about music and listening,” said Todd Wideman, former jazz band director at Kokomo High School.

Musicians tend to have egos and think they already know what they need to know, according to Wideman. That wasn’t the case with Robinson. Wideman recalled Robinson as “wide-eyed” about whatever new piece of music he’d introduce to the class. She knew there was always something she could learn.

“Not many kids have that right off the bat, and she did,” Wideman said.

Cherresa Lawson, KHS’s choir director, said Robinson was “beyond sponge” when it came to learning.

Lawson worked with Robinson when she was a drum major. A willingness to put the group before herself and a consistently positive attitude, Robinson had the makings of a leader even as a high school kid.

A desire to learn has led Robinson to travel the country, connecting with some of the best in the jazz industry.

A two-time Lilly Teacher Creativity Fellow, Robinson used one of the grants to tour the jazz scenes of New Orleans and New York City. The other grant took her to Brazil, where she studied the country’s jazz and culture.

Her travels have led her as far as Australia, where she was the keynote speaker for last year’s Australia National Band and Orchestra Conference.

The high school teacher is entrenched in the Indiana jazz scene as well, serving as president of the Indiana Jazz Educators Association. She is also chair-elect of the National Association for Music Education Jazz Council.

Robinson realizes she doesn’t know it all — that’s why she’s always busy with something, trying to take her teaching to the next level.

“At the end of the day, it means more opportunities for students,” she said.

Her students certainly reap the benefits of her vast jazz network.

Professors from some of Indiana’s top jazz schools visit Robinson’s students multiple times a year. The teacher said she often finds herself listening to the guest teachers.

She’ll also bring in jazz musicians for her students.

“We always make sure our students are playing with the best musicians in the world,” she said.

The opportunities aren’t lost on the kids.

“We get five to six opportunities a year that no other school in Indiana is getting,” said Sean Vitales, a senior bass trombone player.

And it’s not just guest lecturers. The jazz bands at Noblesville High School play in competitions and festivals that most others don’t.

The top jazz band at Noblesville High School placed second at last year’s National Jazz Festival and was one of the best 15 high school bands in the country at the 2021 Essentially Ellington Jazz Festival in New York City.

“We’re definitely at a higher level than a high school band, and it’s because of her,” said senior Nate Cook, who plays lead alto saxophone.

Vitales said Robinson’s favorite saying is “let’s go to a festival.” Robinson will send clips of the band to her jazz musician friends so they can get feedback before competitions.

“That’s not something other schools get,” Vitales said.

Robinson got an idea of the impact she’s had on students through the Grammy’s application process. After years of writing letters of recommendation for students, it was students writing letters for her.

“That by far was the most humbling part of the process,” Robinson said. “It makes sense why they keep showing up to your class year after year.”

The winner of Grammy Music Educator Award will be honored at the annual award show. The winner is notified in advance. With the first major music award show of the year postponed due to COVID, Robinson is unsure when she’ll find out.

The winner will receive $10,000, plus a matching grant for their school. As a finalist, Robinson will receive $1,000, as will Noblesville High School. It’s money that can go back into the program to give students even more opportunities.

“If this is where it ends, it still feels like an incredible journey,” Robinson said.