While it hasn’t reached the level of the public health crisis in Scott County, all signs seem to indicate one thing – Howard County has a narcotic drug problem.

County Coroner Jay Price has seen at least 11 drug overdose-related deaths already in 2015, and is waiting on toxicology results for up to six more cases. That's not counting the people who die drug-related deaths after being transferred from Howard County to hospitals in larger metropolitan areas such as Indianapolis or Fort Wayne.

The county had a total of 18 overdose deaths in 2014. Since taking over in 2008, the most overdose-related fatalities Price has seen in one calendar year was 23 in 2010.

If the 2015 trend continues, it'll be one of the worst years in county history for overdoses.

The main drugs linked to the overdoses are prescription pain medications such as Hydrocodone and Oxycontin, but Price says he sees cases involving heroin and cocaine as well.

"I would like to see these people get their lives straightened out. It’s like playing Russian roulette. Sooner or later, you’re going to come see me."

"There’s a lot of cocaine and heroin in Kokomo," Price said. "I would like to see these people get their lives straightened out. It’s like playing Russian roulette. Sooner or later, you’re going to come see me. It’s very hard on the families, especially when you have to reveal to them that their loved one died of a drug overdose. It’s hard on them. Some families are aware of them, and some aren’t. It’s very frustrating."

Some of the major players in supplying addicts with narcotic medication have been shut down by the authorities in recent years, but that doesn't seem to be stemming the tide in terms of the local drug problem.

One clinic closing its doors won't necessarily slow the flow of drugs into the community, Price said.

"There are other clinics," Price said. "They are the culprit right now. The thing is, let’s face it, if they want some pain medication, they’re going to get it. You have people selling it on the street. It’s always available."

According to the Indiana University Rural Center for AIDS/STD Prevention, between 2002 and 2013, 23.4 percent of drug overdoses in the county proved to be fatal. That was the fifth highest percentage among Indiana’s 92 counties during that timeframe.

In addition, 146 people in Howard County were admitted into healthcare facilities for health problems associated with heroin use in 2012.

In Scott County, an HIV outbreak has spread at an unprecedented rate for Indiana, as the number infected reached the 150 mark this week.

The reason? According to the Centers for Disease Control and Prevention, 96 percent of those individuals reported dissolving tablets of Opana, a prescription opioid painkiller molecularly similar to heroin, and injecting the drug. Users sharing needles and the nature of the drug itself aided in the spread of HIV.

It’s not implausible that something of this nature could happen in Howard County. Scott County, like Howard County, had reported fewer than five new cases of HIV annually the last 10 years.

More Coverage: Intravenous drug use on the rise in Howard County 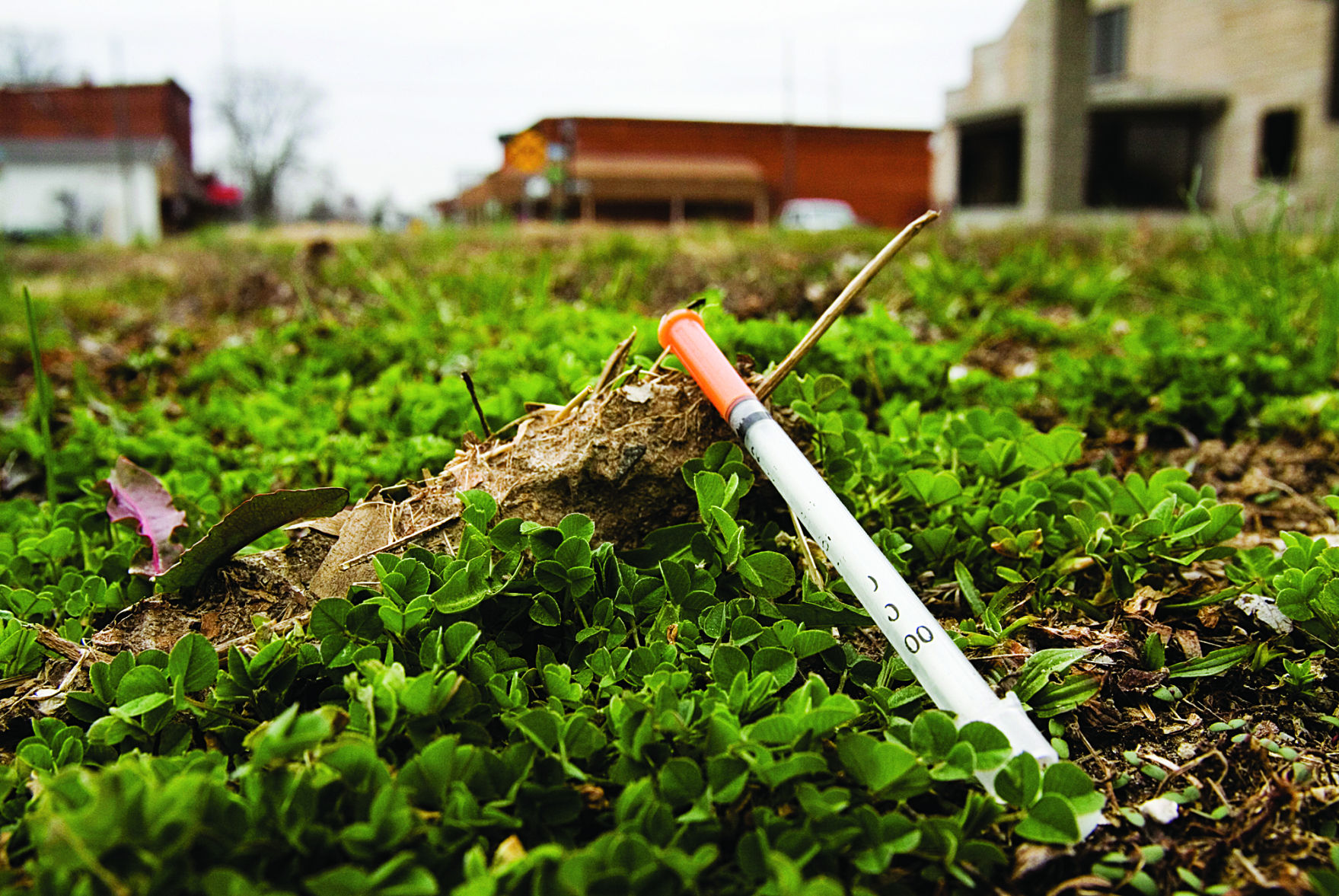 The outbreak in Scott County is a testament to the power of addiction.

Health officials began seeing they might have a major health problem on their hands in November of 2014. Eleven individuals had tested positive by January of 2015, but the number skyrocketed in the last four months as the extent of problem became more apparent and more people were tested for HIV.

"When people first started hearing about these cases and didn’t stop sharing needles – that in itself speaks to opiate addiction."

“It’s a scary thing,” Sexton said. “When people first started hearing about these cases and didn’t stop sharing needles – that in itself speaks to opiate addiction. It really does because they were willing to take that risk to get that high.

“That’s a scary commentary on the power of opiate addiction. It really is.”

According to the Indiana State Department of Health, Scott County had just 62 reported cases of hepatitis C in 2013, before the HIV outbreak took hold.

In Howard County, there were 52 confirmed cases of hepatitis C in 2013, according to the ISDH. However, the county health department’s numbers don’t match up with the state. They’re much higher.

The discrepancy between the two agencies could stem from the way the disease is reported. Sexton surmised there could be some duplicate cases reported in the county’s numbers in some years, and maybe not counted at all in others, mainly due to the fact there wasn’t a uniform reporting procedure in place until recently.

A new electronic reporting system should help. The new system will be able to identify duplicate reports from years past.

“That helps a lot,” Sexton said. “You might still have to do a report, but a different kind. I think the two sides’ numbers will be a little bit closer in the future, but it all has to do with whether it was duplicated or reported under a slightly different name. It’s not a perfect science when it comes to hepatitis C.”

While the county numbers indicate an upward trend in the disease, the numbers could be rising due to increased testing and reporting.

In recent years, medical professionals have pushed for increased testing among the baby boomer generation. Studies have shown individuals 50 years of age and older were more likely than individuals of other age groups to have tried injection-type drugs even one time. That one time increases the chances of contracting hepatitis C and HIV dramatically.

“People prior to the time when screening began for those diseases that had blood transfusions or organ donations need to be looked at,” explained Monette Allen, director or emergency medical services at St. Joseph Hospital. “Also, the folks that have partners who are positive for hepatitis C should probably have serial screenings to make sure that crossover doesn’t happen at some point.”

Fifteen to 20 percent of people who contract the hepatitis C will be able to clear the virus on their own, but others are at risk for developing a chronic infection, which can have catastrophic effects on the liver, potentially leading to cirrhosis or cancer.

Hepatitis C has been identified as the No. 1 cause of liver cancer in the world. And, to complicate the matter, the virus can lay dormant in an infected individual for up to 20 years before that person realizes they have the disease.

Those two facts have led to an increased effort by medical professionals to be proactive in helping patients understand the importance of being tested.

“To me, when you read the literature, it doesn’t seem like it takes a big exposure,” Allen said. “Don’t share razors. Don’t share toothbrushes. There is an insignificant amount of blood that you can become exposed to that can leave you at risk.”

Gov. Mike Pence recently signed into law a needle exchange program for areas of the state which are at risk for a major outbreak of infectious disease like the one in Scott County.

However, there must be solid evidence of such a risk to be eligible for the program.

Numerous studies have shown needle exchange programs do not increase IV drug use within communities, which had been a major concern among public officials in the past.

More so than encouraging drug use, the programs help slow the spread of diseases such as HIV and hepatitis C.

“From a public health standpoint, there are benefits to a needle exchange program,” Sexton said. “I think that’s an important piece of prevention for HIV.

“A lot of times, the addiction outweighs all good choices, even if they have the knowledge,” she added. “The addiction can be so overpowering that they don’t care anymore.”

Why are opiates so addictive?

Long-term opioid use changes the way nerve cells work in the brain. This happens even to people who take opioids for a long time to treat pain as prescribed by their doctor.

The nerve cells grow used to having opioids around, so when they are taken away suddenly, the person can have lots of unpleasant feelings and reactions, known as withdrawal symptoms, which include aches, fever, sweating, shaking and the chills.

That is why use of opioids should be carefully monitored by a doctor — so that a person knows how much to take and when, as well as how to stop taking them to lessen the chances of withdrawal symptoms. Eventually, the cells will work normally again, but that takes time.

Someone who is addicted to opioids has other problems as well. For example, they keep taking the drug even though it may be having harmful effects on their life and their health. They have strong urges to take the drug, and often no longer feel satisfied by natural rewards like chocolate, TV or a walk on the beach.

What is hepatitis C?

Hepatitis C is a disease caused by a virus that infects the liver and leads to inflammation. It is the No. 1 cause of liver cancer in the world.

The disease is contracted through infected blood, primarily through:

- Sharing of contaminated needles, syringes, or other injection drug paraphernalia

- Birth to an infected mother

People at risk include:

- Recipients of clotting factor concentrates before 1987

- Recipients of blood transfusions or donated organs before July of 1992

- Persons with known exposures to hepatitis C (for example, healthcare workers with a needle prick-type of injury)

A public health emergency has been declared in Madison County because of a sharp increase in the number of Hepatitis C cases being reported in the county.

To combat the diseases associated with intravenous drug use, the Howard County Health Department is preparing for the potential adoption of a …

Intravenous drug use on the rise in Howard County

When drug task force officers serve a search warrant at a suspected drug house, they’re likely to come across a number of syringes.