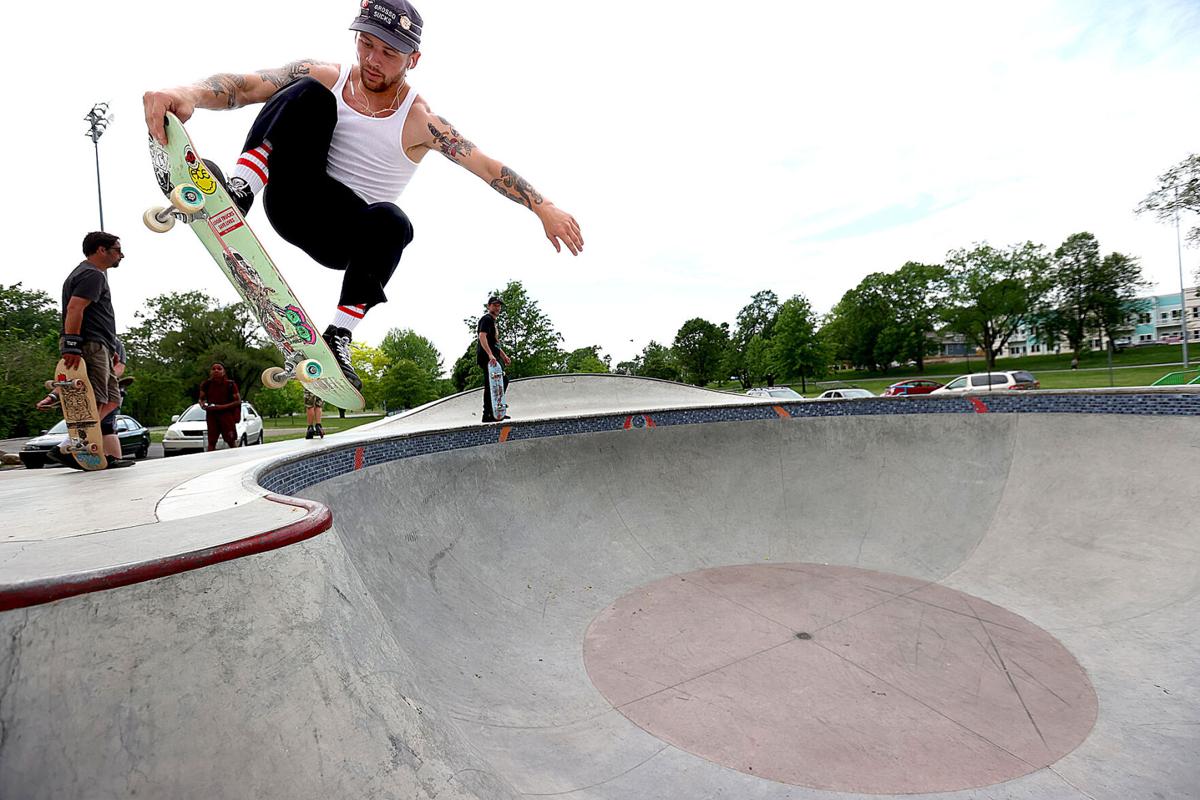 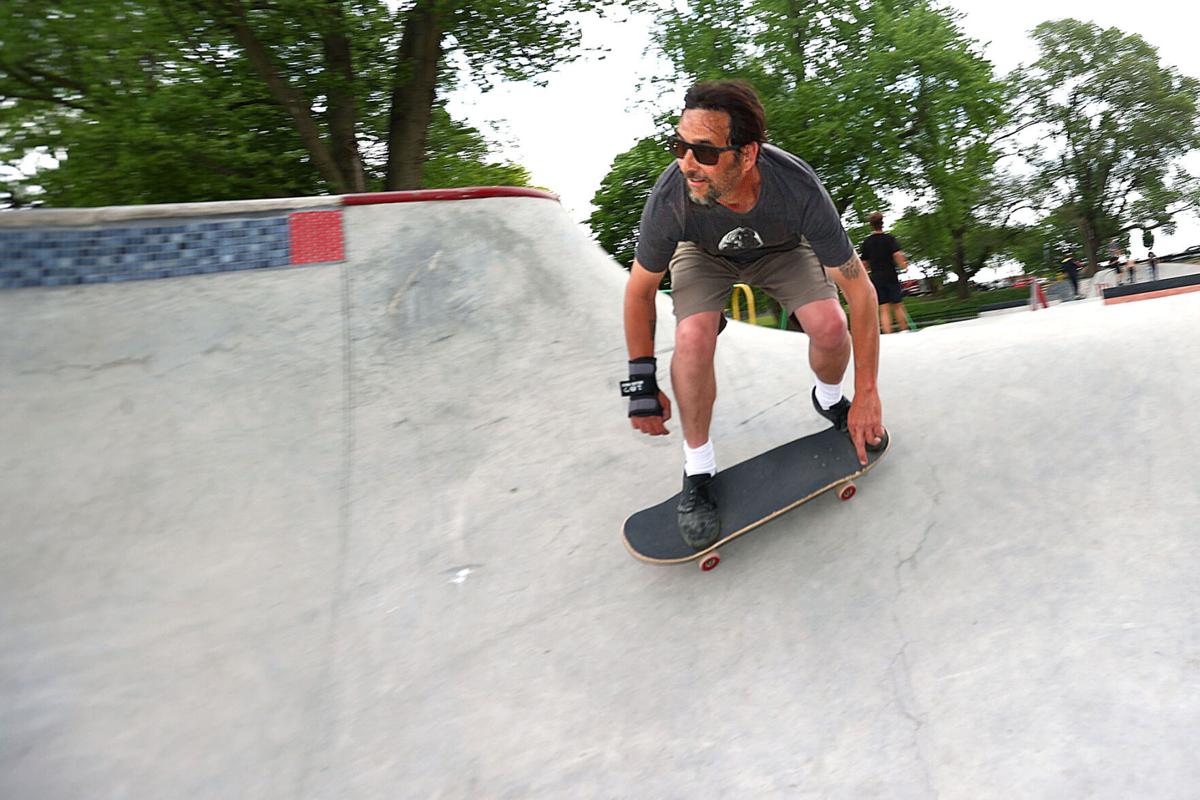 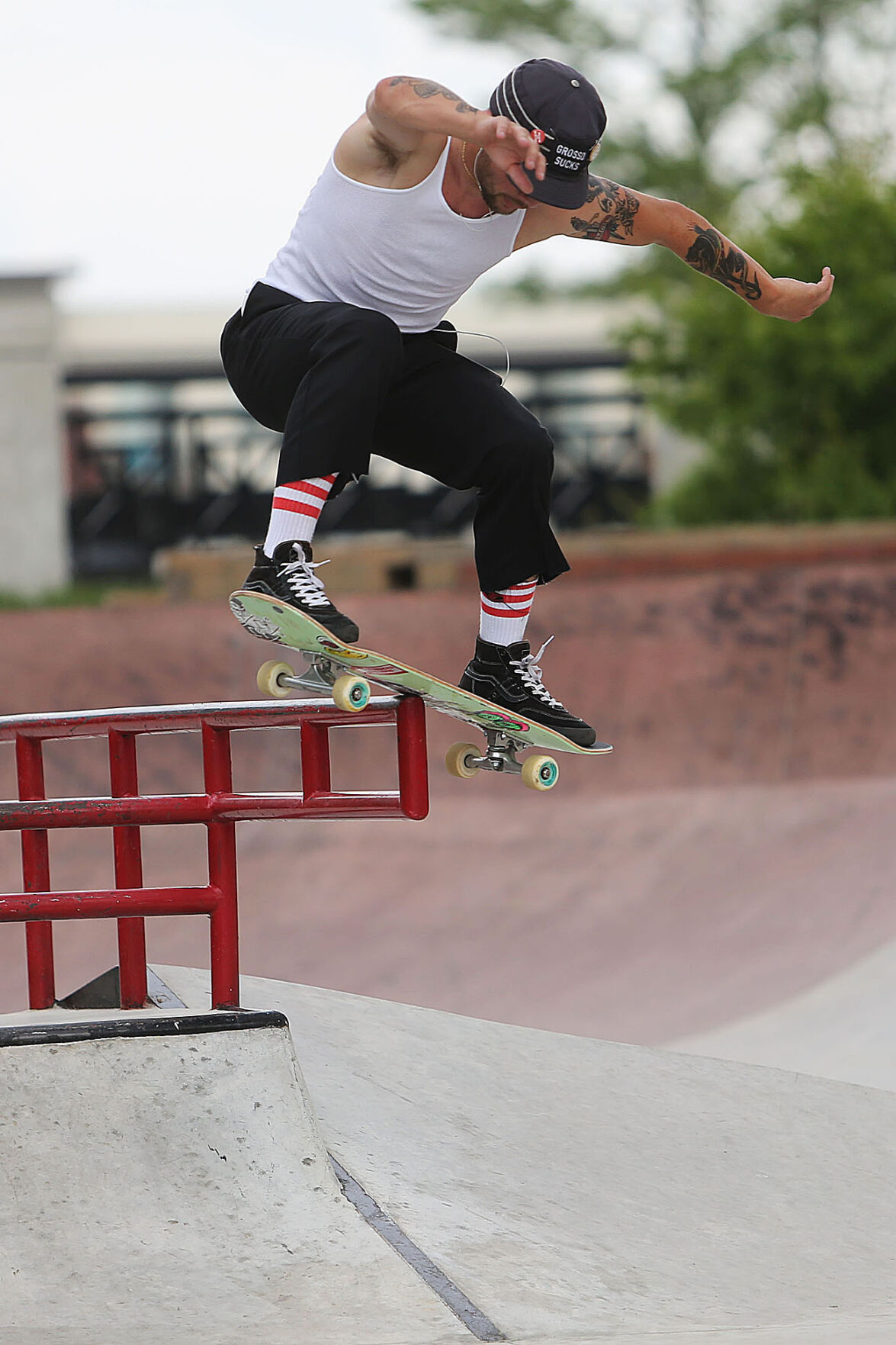 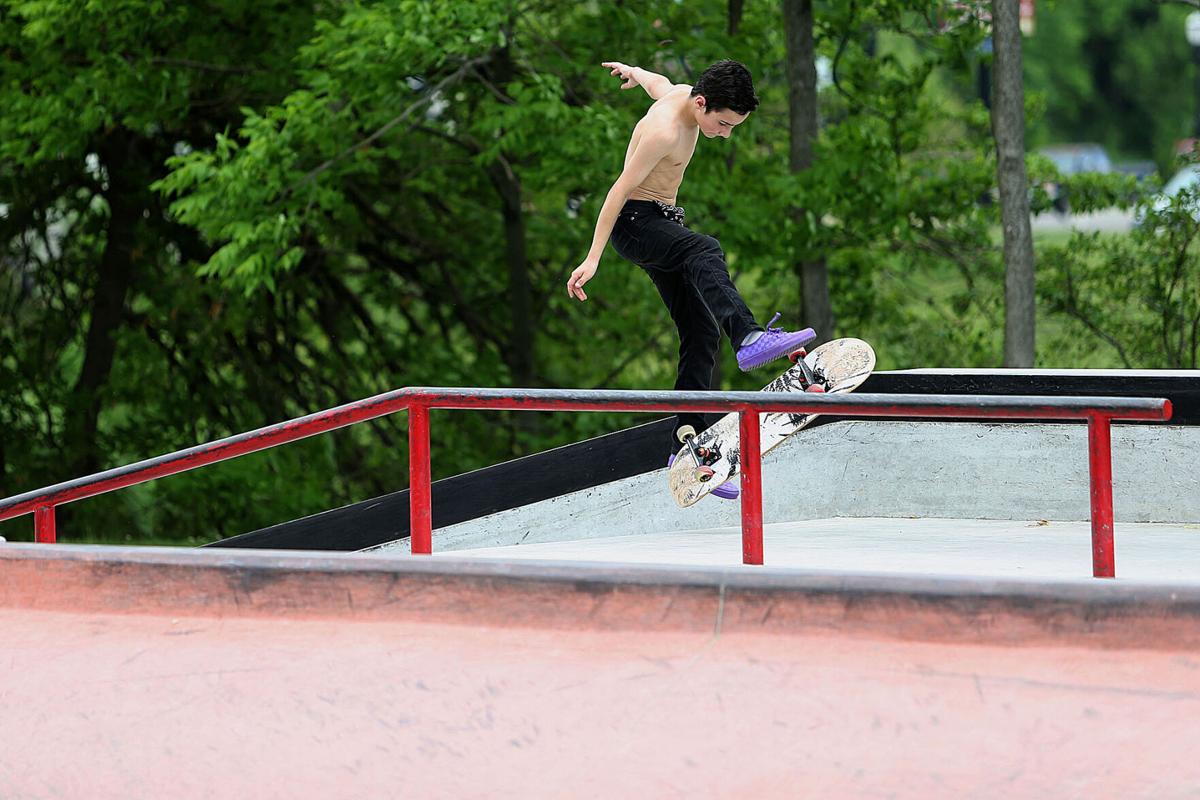 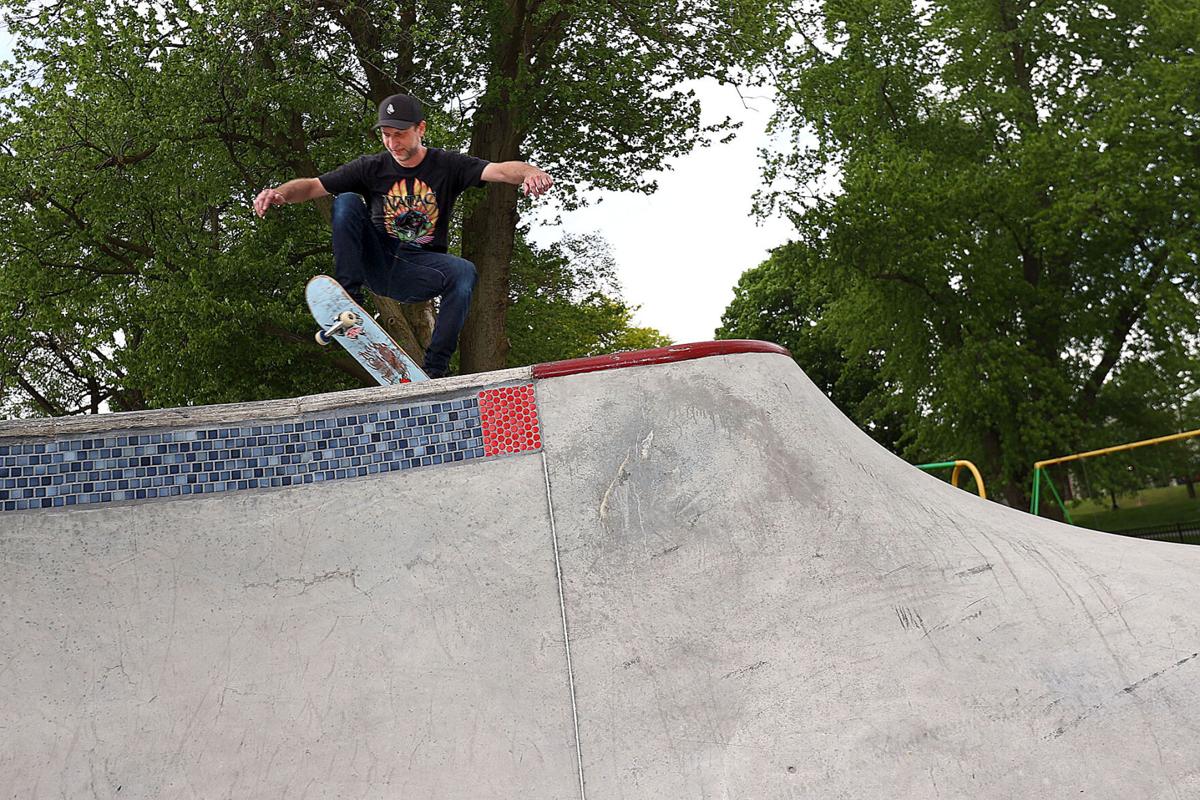 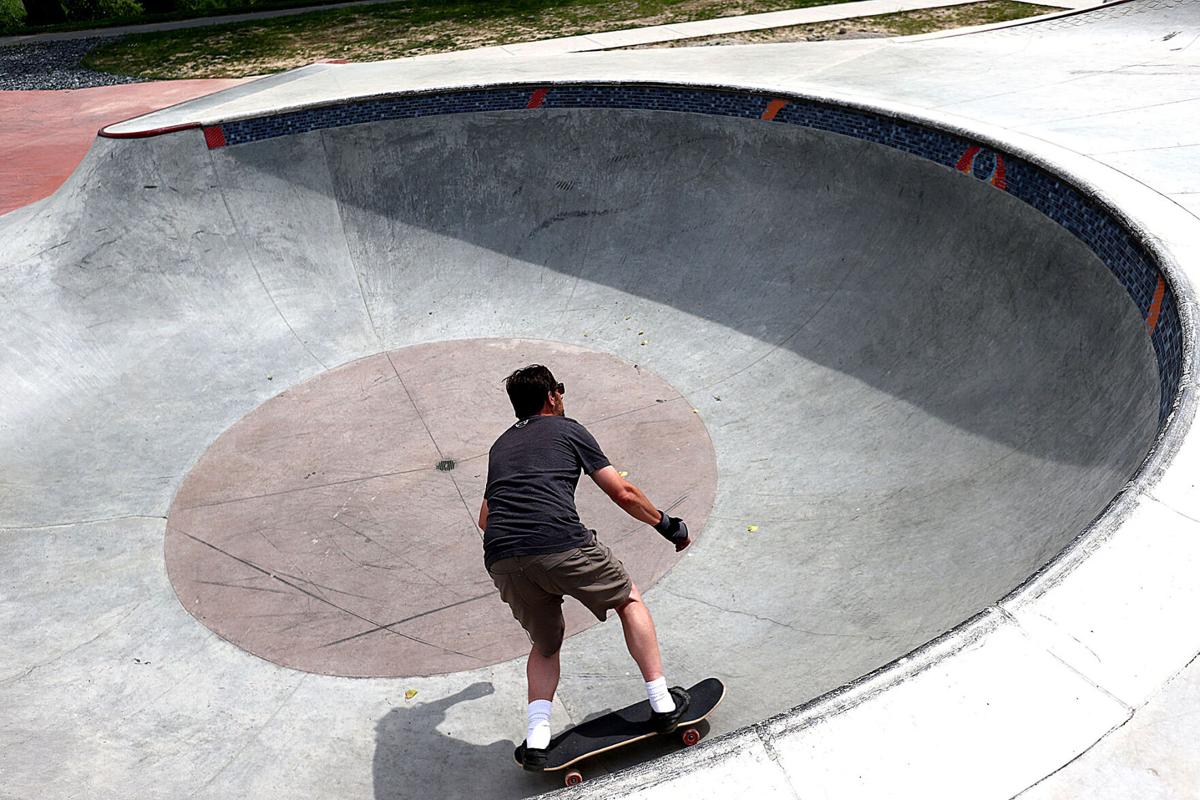 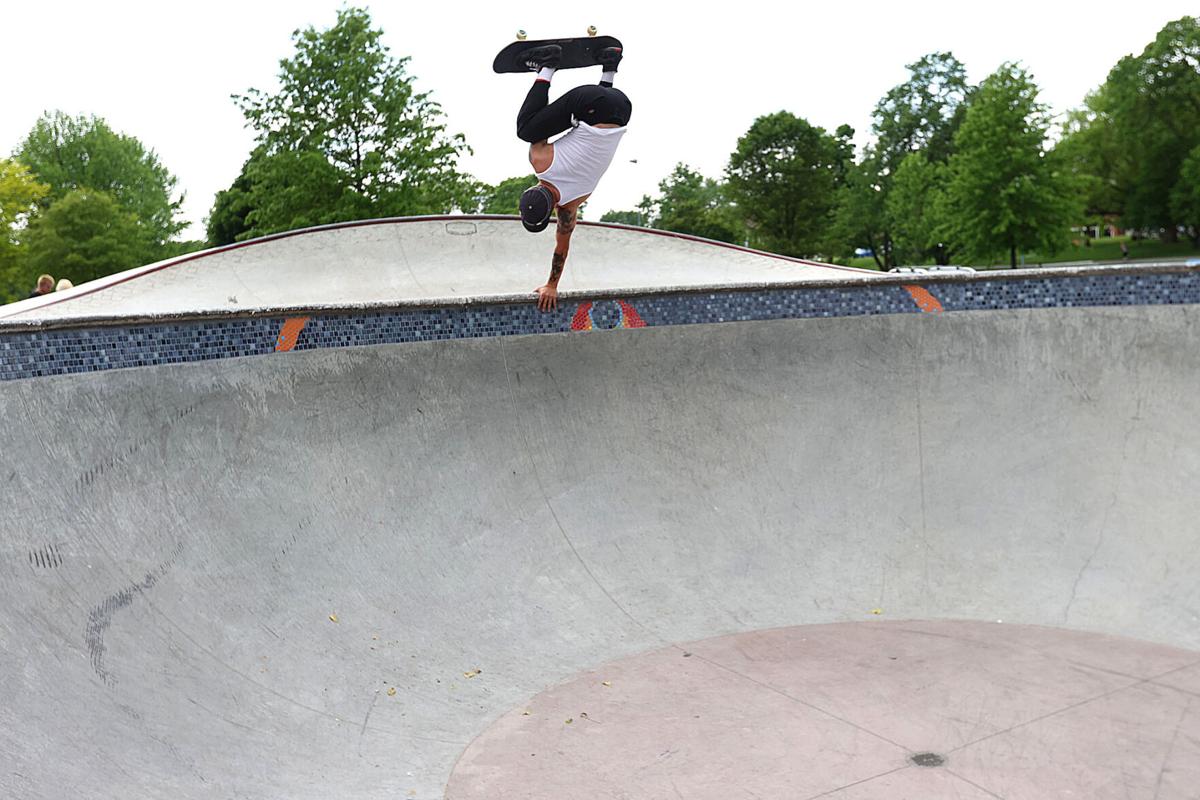 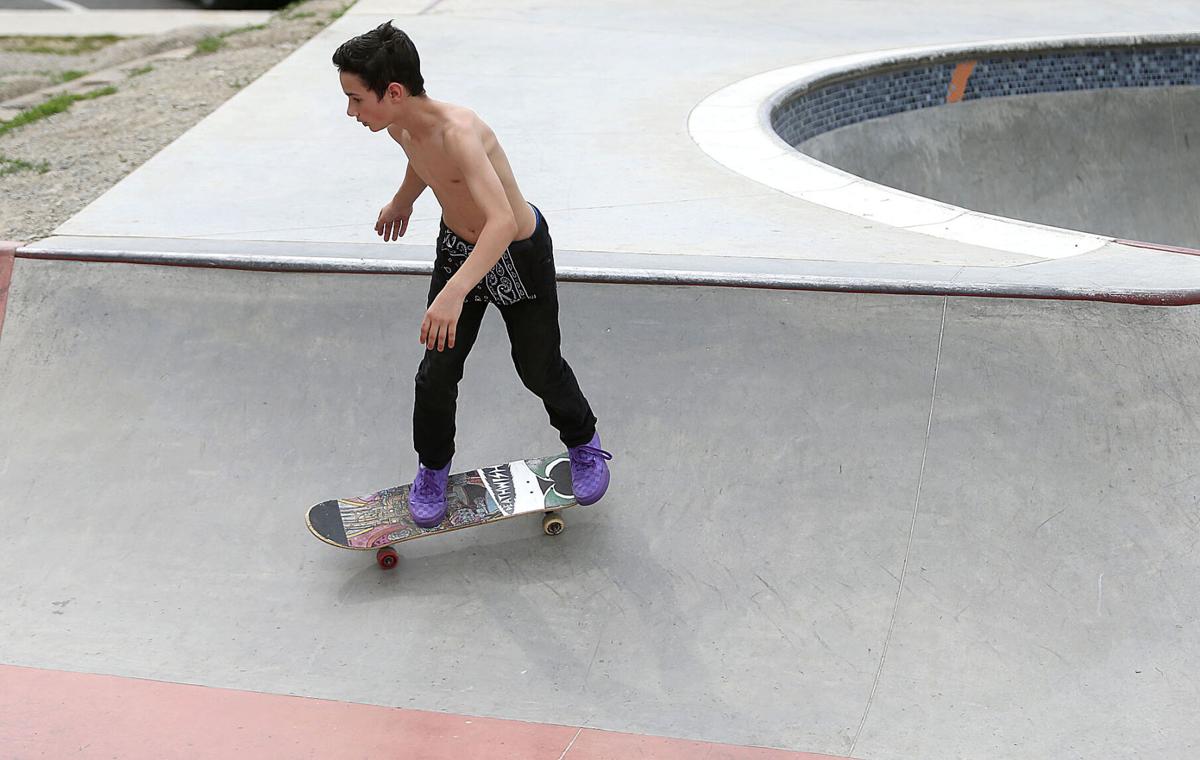 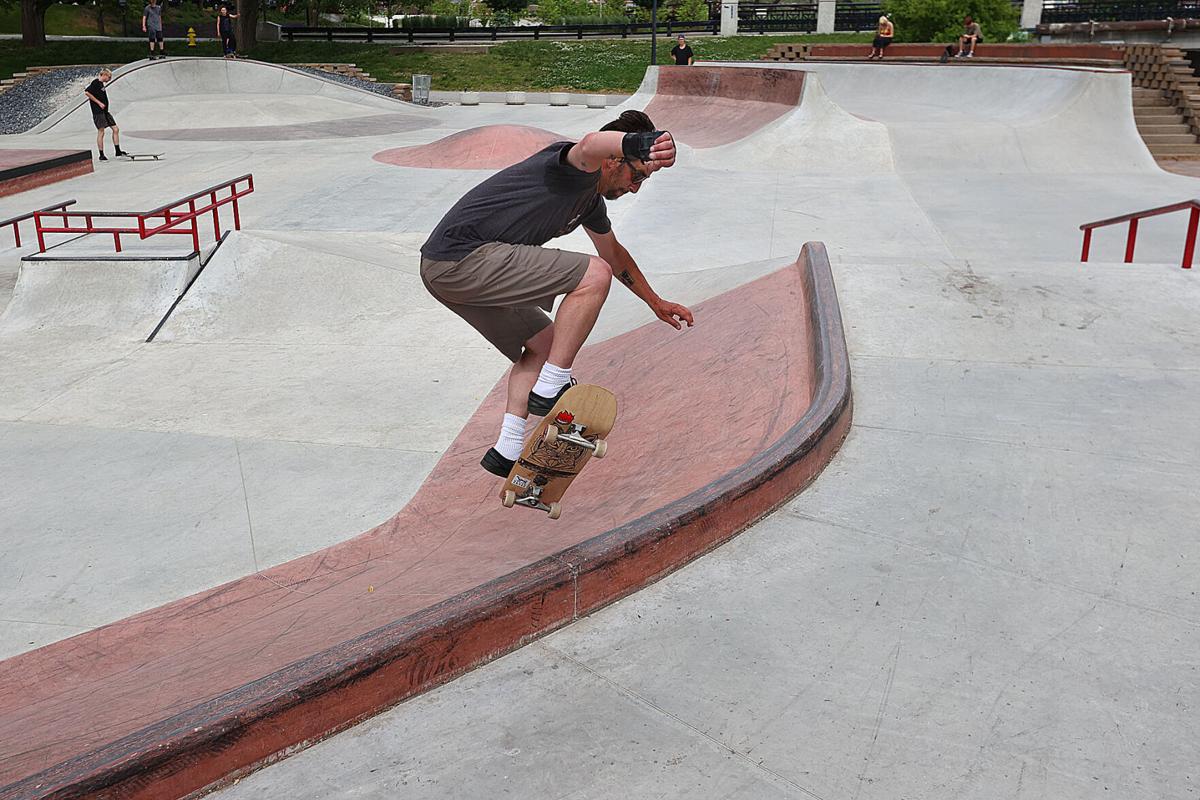 Near the center of Foster Skate Park, there’s a red bank of concrete with a curb on top of it. For many young skaters at the park, it blends in with the park’s aesthetic of plain concrete with red accents.

To others, it’s a replica of the front of the China Clipper, a Chinese restaurant that used to be in downtown Kokomo. It was one of the best spots to skate years ago, before the current Kokomo skate parks existed.

There’s a long history of skateboarding in Kokomo and the surrounding area, some of which is lost to time. Local skater Matt Davis, 51, said he knows skateboarding in the area goes at least back to a board made by Kingston Rollerskate, which was named Arcadia after the business’ manufacturing plant in Arcadia. As far as he knows, there’s only one of those boards out there, and he’s only seen a picture of it.

Fellow local skater Pat Dotson, 55, started skating in the 1980s. He said he’d heard of skate parks in the area that existed in the ‘70s, but they were long gone by the time he got on the board.

Dotson, who grew up mostly in Greentown, started skateboarding when he was around 8 years old. His first board was a hand-me-down from his sister’s friend that was made in shop class at Eastern High School. The old board was just some wood with metal roller skate wheels nailed to it.

“It was pretty crude,” he said.

In 1975, when Dotson was in fifth grade, skateboarding had a surge in popularity. Dotson said “everybody got a skateboard” for birthday or holiday gifts.

“At that time it was just a toy, so we’d take them and ride them around at recess,” he said. “That lasted just long enough for someone to fall and hurt themselves.”

By the early 1980s, skateboarding wasn’t a toy for Dotson; it was a passion. By this time, those concrete skate parks from the ‘70s were gone as the skateboarding fad waned and insurance and liability costs rose.

Built in the backyard

With nowhere to go, skaters had two options: skating the streets or building their own ramps.

The mostly teenagers would build ramps to resemble ramps made from large diameter pipe, giving the ramps their names: full-pipe, half-pipe, quarter-pipe. A half-pipe structure looks similar to the cross-section of a swimming pool, featuring two concave ramps — quarter-pipes, facing each other.

Dotson said that there were between six and eight half-pipes in town that became hotspots for skating. He added that every town has a local skate hero, but something about Kokomo seemed a little special.

Chris Schwartz, 46, started skating at age 12 in 1987 after his parents got him a board from a department store. He fell in love with the sport. Schwartz said his passion really took off when he went to baseball practice and met Shaun Milligan.

“This kid had this cool jean jacket on with this cool drawing of a skateboard on it, and I thought that was really cool,” he said. “ ... Shaun came over to my house and he did an ollie. And I was like, ‘Whoa, what’s that?’ And he taught me how to ollie, and that’s how it started.”

Davis was one of the skaters with a ramp in his yard. His family was into BMX/motocross biking, so skateboarding wasn’t too much of a stretch. Having friends over to skate became called “jam sessions.”

Davis said that there’s so much to skateboarding that’s worth mentioning.

“It’s difficult, but it’s so endless. It blows my mind with the creativity,” he said. “It’s not stagnant, it’s always evolving.”

A place to go

Shaun Milligan said that finding places to skate could be tricky, especially when it was normal for police to show up when skating in an empty parking lot. Sometimes he and friends would hear about a ramp in a neighborhood, so they’d bike there and ask a nearby gas station attendant if they knew where the ramp was.

“That’s just how we figured it out back then, because we just wanted to skate,” he said. “Skateboarding is addictive. It’s the thrill, the feeling of the board underneath your feet. It’s an addiction.”

But when Dan Ayres and his sons, Damon and Devin, opened DK Skate Shop, there was a place for skaters to commune. Outside the shop was a street course with wooden small ramps, a 10-foot tall metal vertical ramp and a 5-foot wooden mini-ramp.

“You can’t have Kokomo skate history without Dan, DK’s,” he said. “It was always there, whether it was a skate shop where you could buy products or a park that you could ride.”

At one point, DK partnered with Boy Scouts, which allowed the Scouts to skate in the park. Ayres said that his sons owned the park from 1986 to 1992, and then he opened DK’s Main Street Skate Park, which was an indoor skate park, from 1995 to 2013.

Bart Smith, of Kokomo, who is owner of Hunger Skateparks, designs skateparks. He also was the designer of Foster Skate Park. Ayres said that Smith is a really close friend of the family, particularly to Devan and Damon.

While Smith is quick to credit the Ayres family for their impact on the skating scene, Ayres was eager to praise Smith’s work. He said he’s never seen a park of that size get so much attention.

“It gets guys, girls, everybody,” he said. “I haven’t really seen one that drew people like that. He did a really super job on that.”

AJ Nelson, 25, skates “vert,” the big ramps that come to mind when thinking of pro legend Tony Hawk. While Nelson isn’t in the same age group as the “uniquely high-quality skateboarders” that Dotson spoke of, he shows promise.

He’s competed on the East and West coasts, and in Sweden in 2019. He’s sponsored by Powell Peralta, Ace Trucks, Speedlab Wheel and many more, but he said he competes for the love of the sport.

Nelson was born and raised in Kokomo and grew up near Foster Park. Neslon saw his friends put down ball sports to pick up a board, and he wanted to join in. He bought his first board at DK.

“It was not very accepted. You’d get bullied, you’d get hazed, you’d get the worst things said to you, use your imagination,” he said. “But it’s become more and more accepted, and people realized that it’s not just this bad rap of skateboarders causing trouble.”

Now, kids have several parks to choose from, including Foster Skate Park and Pipeline Park — which is Nelson’s favorite park of all time. Nelson said having the parks helps kids realize skateboarding is a welcoming sport.

“It doesn’t matter if you’re white, purple, Black, blue, green, turquoise,” he said. “Whatever gender, whatever you identify as, skating is skating, no matter how big you are or what you look like. As long as you skate and you’re cool, you’ll be accepted. Just be a decent human being, that’s all it takes.”

Milligan said that accepting atmosphere is one he tries to create for all the skaters coming up in Kokomo.

“I’m just this 46-year-old out here riding my skateboard,” he said. “I’m just trying to roll around and encourage the younger generation, to help or just be around.”

Most of those skaters still jump on their boards.

Dotson said he has been trying to skate more recently, but he wound up falling and breaking two ribs. He called it a mere setback {span}—{/span} not something that will keep him away from skating for long.

Shaun Milligan, Schwartz and Nelson met up to skate at Foster Park. They were surrounded by people of all walks of life. Some were in middle school, pthers were in their 50s.

Smith said that creating Foster Park for his hometown was a dream come true.

“Every time I go back there, I’m so amazed of the skill level of these kids who are so young,” he said. “That’s the best part for me, being able to see these new generations coming up.”

One part of the park is particularly meaningful not only to Smith, but to the entire group. It’s a catfish with a black heart, in memoriam of Devin Ayres, who died in 2017. Smith said that Devin Ayres was one of the first street skaters in Kokomo.

“He always drew these black hearts. That was like his little moniker; that was our little thing for him,” he said. “He was the movement when skating first got popular. He was the original. He could ollie over a tennis net on flat ground.”

For Dotson, seeing how far skateboarding has come — from backyards to city parks — is a huge deal.

“We would have never believed (that park) could have happened back then because it was so counter-culture,” he said. “...We were just weirdos doing this other thing. It’s still got that aspect of being a little rebellious, you know? But the city sees that there’s value in having a place for them to go. We just had to do it ourselves.”

Slalom: down a slope, weaving between obstacles

Downhill: downhill, usually on a longboard

Freestyle: graceful dancing with a skateboard, usually to music,

Pool: draining a swimming pool to skate in

Park: a mix between pool, street and a little bit of vert