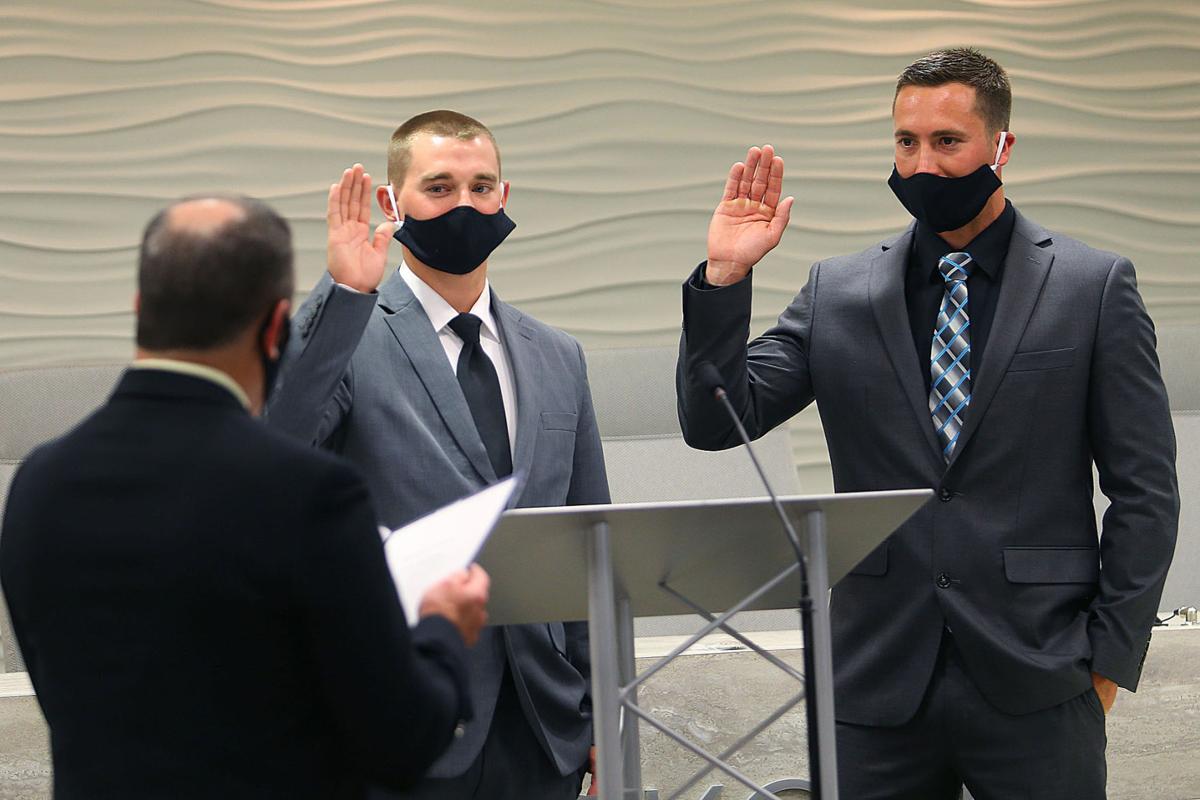 Brok Westfall and Shawn Swinford take the Oath of Office for Kokomo Police Department with Mayor Tyler Moore conducting the oath on Monday, May 18, 2020. They are both experience police officers from the Peru Police Department. Tim Bath | Kokomo Tribune

Brok Westfall and Shawn Swinford take the Oath of Office for Kokomo Police Department on Monday, May 18, 2020. They are both experience police officers from the Peru Police Department. They then received their badges from Asst Chief Teresa Galloway and Chief Doug Stout. Tim Bath | Kokomo Tribune 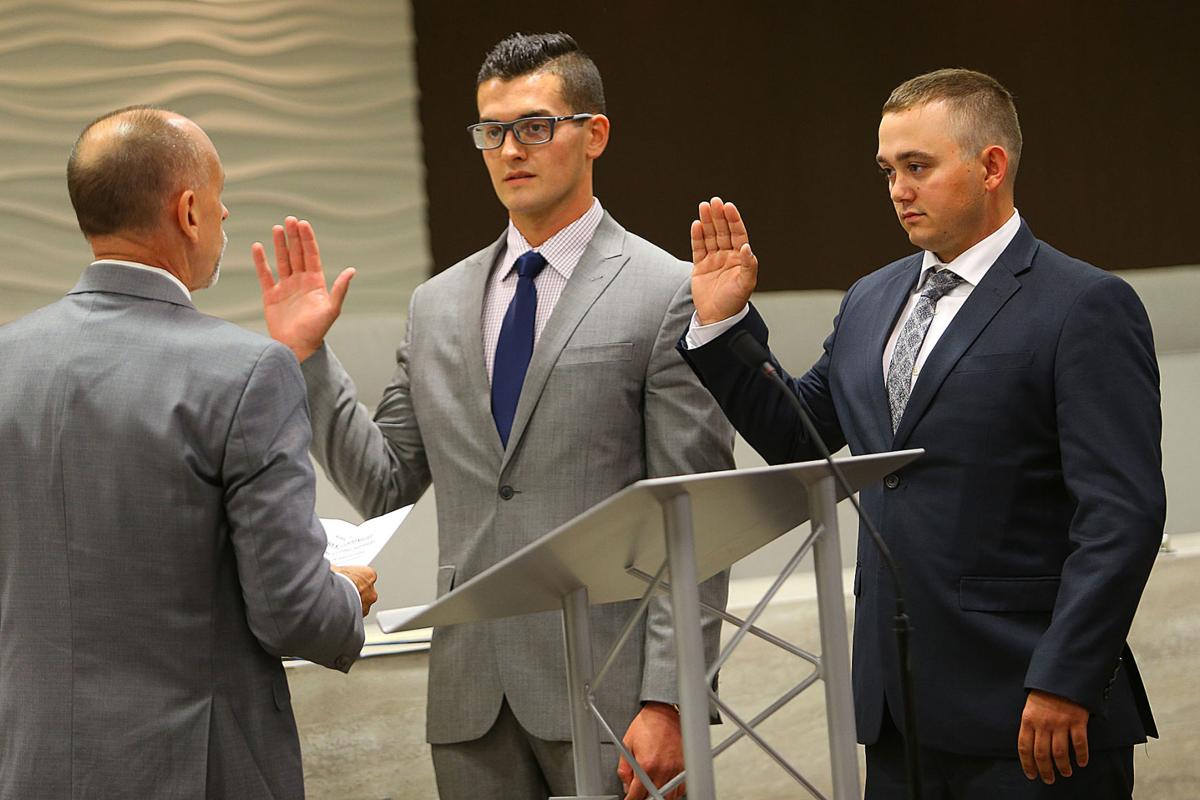 Brok Westfall and Shawn Swinford take the Oath of Office for Kokomo Police Department with Mayor Tyler Moore conducting the oath on Monday, May 18, 2020. They are both experience police officers from the Peru Police Department. Tim Bath | Kokomo Tribune

Brok Westfall and Shawn Swinford take the Oath of Office for Kokomo Police Department on Monday, May 18, 2020. They are both experience police officers from the Peru Police Department. They then received their badges from Asst Chief Teresa Galloway and Chief Doug Stout. Tim Bath | Kokomo Tribune

When Kokomo Police Department Trainer Jim Nielson hired onto the department more than two decades ago, he remembers how difficult it was to even become an officer.

It wasn’t because the job was too taxing for the applicants involved, but it was the fact that hundreds of people wanted to fill the same shoes.

According to a 2019 national study conducted by the Police Executive Research Forum, 41% of officers surveyed in the report said the shortage of the number of sworn officers has steadily increased over the past five years.

And KPD — which is currently standing at 80 sworn officers — is no different.

“What’s the solution to recruitment?” Nielson said. “Make it to where being a police officer is the thing people want to do, and I don’t know how you do that. But I think it’s an important step. But the way the things are right now, very few people really want to do this job. It shows when we have our tryouts.”

There is also a lot that goes into making a police officer too, officials said, with the process from recruitment to actually putting boots on the ground taking several months. And it’s a process that some people learn along the way that they’re not cut out for, they noted.

Nielson and Capt. Heath Haalck then began to detail the recruitment process from beginning to end to prove that point.

“Instinctively, in order to come in and do this job, you have to subject yourself to agility, written test, interview, you have the psychological, medical. You have to pass a background check. … That’s the standard.”

And while these checks and assessments are meant to weed out preconceived biases or stereotypes toward a certain population of people who may exist in a potential recruit, Nielson admitted it could still be possible for some to slip through the cracks.

“These people on the streets that are policing, you need them to have the integrity. You got to make sure they don’t have the history,” Nielson said. “Really, without reading someone’s mind, that [psychological and behavioral assessment] are the only way you can do that.”

And if recruits make it successfully through all of that, KPD then offers them a conditional employment, Haalck noted.

But as important as it is to find quality recruits who can physically and mentally handle the job, it’s equally as important to create a diverse makeup on your department, as a group of local African American pastors pointed out during a Wednesday conference call with the Tribune.

“We need to make sure there’s a culture and a climate within the police department that’s attractive to African Americans and is supportive of African Americans or people of color,” Pastor Lonnie Anderson of Mt. Pisgah Missionary Baptist Church stated. “And then also make sure there’s a culture that is acceptable and that nurtures people of color. And then also one that pays well too.”

“It’s a lot like the armed forces,” he said. “I think the advantage that they have and what they’ve done is they go into the high schools. There are upstanding young men who have intentions of doing things correctly who are looking for these grand advancements before they get there as stepping stones to get them to their ultimate goals.

“So if policing could be seen … as a promising career choice that they would have the potential of moving up through the ranks in and becoming a career officer with a respectable name, title and income, I think that would definitely enhance the process in young men to make policing a possible choice,” Oglesby added.

Right now at KPD, there are only two African American officers, a number the pastors said is sad compared to the city’s diverse population.

It can also be dangerous, they noted.

“I think it is [George] Floyd, [Eric] Garner and a whole list of names that go on and on,” Anderson said, referring to when a police department lacks diversity. “That’s the danger. The danger is just trying to police people you don’t understand and trying to communicate with someone you cannot communicate with. The dangers are you bring in your own personal bias, your own personal prejudices. The dangers are that it can be a life and death matter.”

Oglesby agreed with Anderson, saying that the danger is there are police officers who are “deciding and are becoming on the streets the judge and jury for a person who they have a preconceived negative bias of.”

But issues with recruitment are also just part of the reason why the officials and pastors both said it’s often difficult to not only find career police officers but to also retain them.

It can also have a lot to do with the overall stress of the job, something officials said they understand and are trying to remedy so that those stresses don’t boil over into an unintended escalated use of force encounter with the public.

According to its website, CISM is a program that is designed to help first responders understand a wide variety of crisis intervention techniques.

After the training, those responders then become certified and go back to their different agencies in what they refer to as CISM “teams,” which lead debriefings or offer peer support when needed.

CISM is another tool in the belt for KPD, Chief Doug Stout said, but it’s also an exciting one.

“The longer we get in this profession, we realize there are things that a lot of us have to deal with on a daily basis that we take as normal,” Stout said. “So what can we do for that officer’s mental health? We see things that people don’t see or have to deal with, and the thinking about the officer’s mental health in these routine calls for service needs to increase, which we have done this year.

“It’s easy to think when you work with a group of professionals for 20-some years that they’re a professional law enforcement officer, that they can handle it. That’s the easy way. We’re taking the different way of saying, ‘Wait a minute, let’s talk to them. Let’s make sure that he’s able to handle both,’” Stout added.