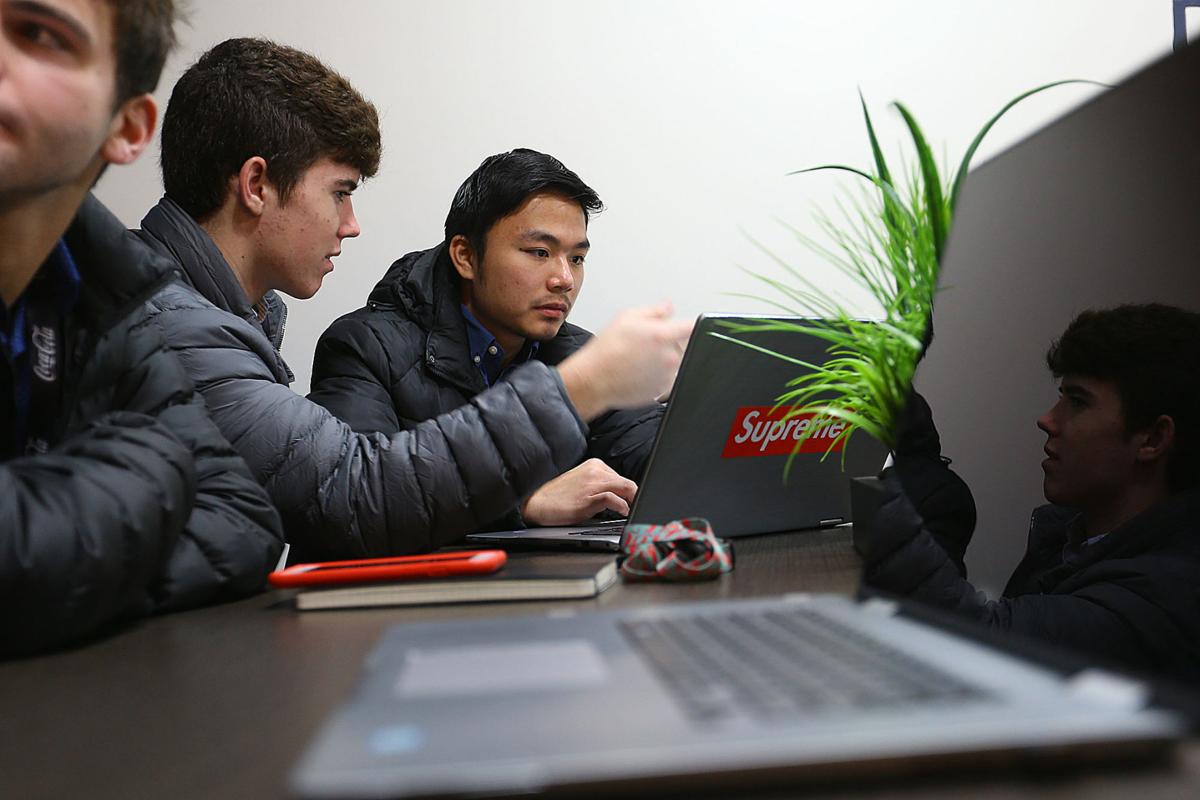 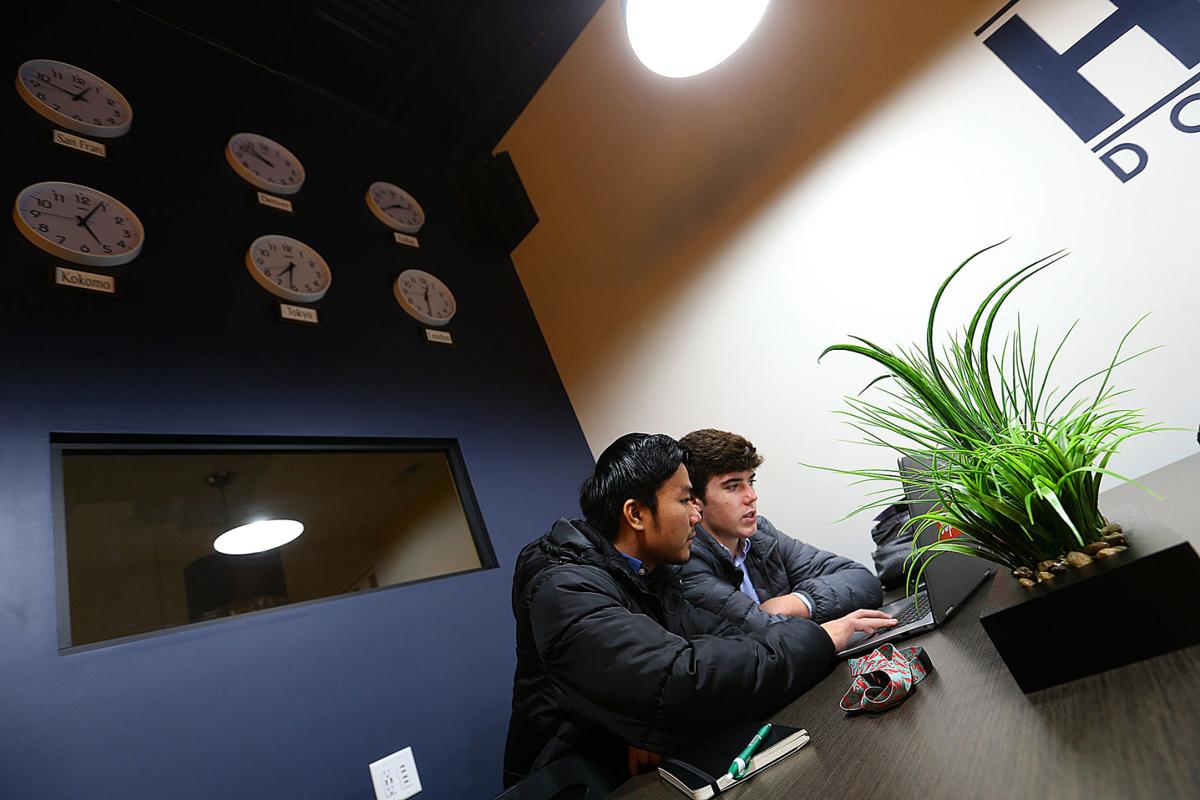 KHS students Gene Yang and Mitchell Wyrick work during their CEO class on Dec. 11, 2019. Yang has been awarded a full ride scholarship to Duke University. 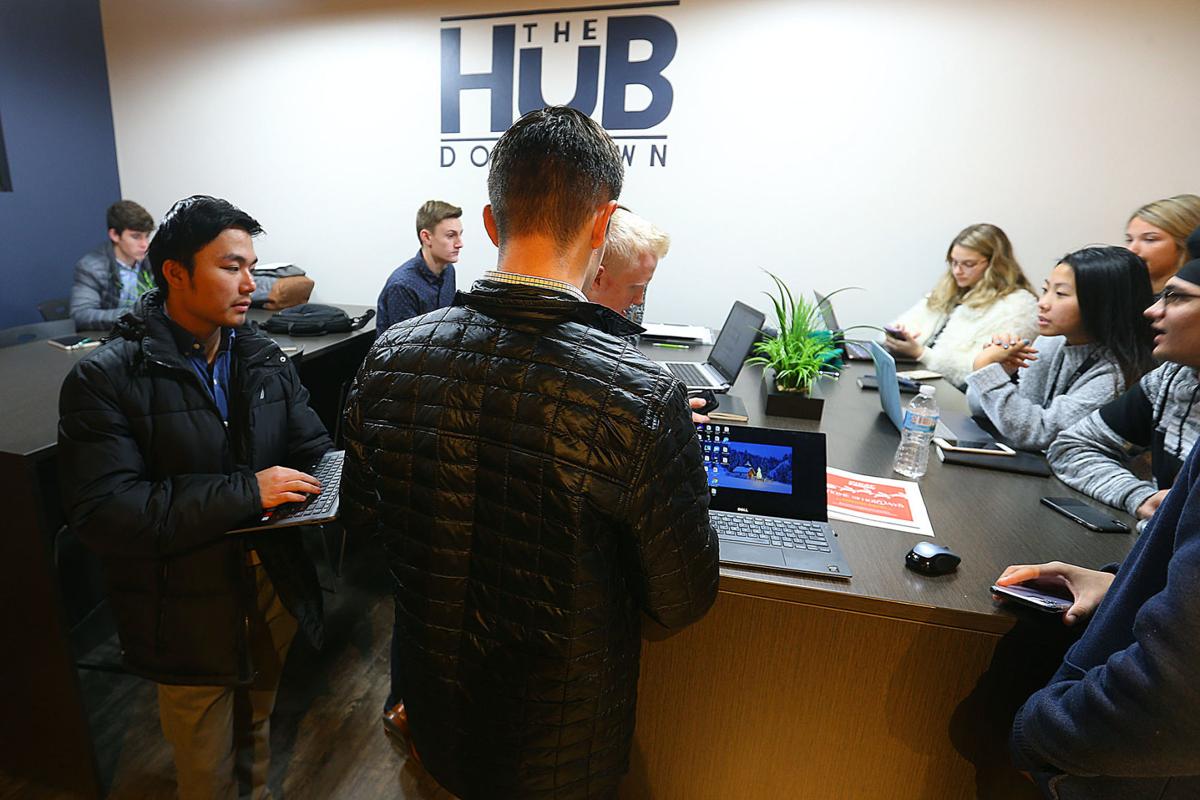 KHS students Gene Yang and Mitchell Wyrick work during their CEO class on Dec. 11, 2019. Yang has been awarded a full ride scholarship to Duke University.

As a senior at Kokomo High School, Gene Yang has done some incredible things in his 17 years.

He has completed the rigorous International Baccalaureate Diploma program requirements, while also taking seven Advanced Placement exams. He received the top score of 5 on six of those exams, earning him the honor of AP Scholar with Distinction.

“Gene is an incredibly gifted student who has taken advantage of our many college preparatory courses at Kokomo High School,” Principal Angela Blessing said.

Additionally, while attending KHS, Yang has had the unique opportunity to do research at Purdue University with Dr. Clark Gedney. He currently does research involving “mitochondria,” which is the powerhouse of the cell.

Mitochondria, which provides cells energy, help the immune system respond to “amyloid” plaques, which are a cause of Alzheimer’s disease.

“A leading theory is Alzheimer’s is a buildup of amyloid beta,” Yang said. “Basically the theory is that it clogs up the brain and results in the dementia ... there’s lots of contrasting theories about how exactly this amyloid beta might result in dementia, and is that buildup a cause or is it an effect of a greater process?”

He said his interest in the topic sprouts from his curiosity about philosophy, cognitive science and questions regarding the basis of human behavior.

With all of that under his belt, Yang was chosen to be one of 1,127 students nationally attending college with the QuestBridge Match Scholarship. That means he is getting a full-ride to Duke University and a chance to fulfill a dream.

According to the QuestBridge website, the organization helps connect exceptional, low-income students with colleges.

“By working with these students — beginning in high school through college to their first job —QuestBridge aims to increase the percentage of talented low-income students attending the nation’s best colleges and to support them to achieve success in their careers and communities,” according to the site.

Yang chose to apply because it provides an advantage over just applying then hoping he qualified for financial aid. Another aspect he liked about QuestBridge was the opportunity to write more for the applications over a common application, which usually has one or two essays.

For QuestBridge, there are two extended essays, one biographical and one about the influence of the applicant’s community or an interest. There are also 10 short answer questions.

“You get a lot more opportunities to express what you’re interested in and your personality,” he said.

One of the unique aspects of the QuestBridge is the match system, which is the way Yang ended up selecting Duke.

Students applying for the QuestBridge scholarship may select up to 12 universities and rank them. The applicant also signs a waiver stating they will attend the highest ranked college on their list that accepts them.

Aside from Duke, some of Yang’s university choices included Stanford, Princeton, Yale, Northwestern and Vanderbilt.

In October, students who applied found out if they’ve made the cut to be finalists. This year there were 5,842 finalists out of the original 14,926 applicants. These finalists then apply to their college choices and write their essays, which were due Nov. 1. Yang ended up writing 40 pages of application essays for the 11 colleges he chose.

The finalist students’ applications get read by every single college they have ranked. The student is then admitted to the highest ranking college they were accepted by. The students get matched with a full ride, which covers room, board, tuition and books. In Yang’s case, he was covered for transportation as well.

“I get two round-trip plane tickets every single year,” he said.

Dec. 2, 4:43 p.m. is a time which Yang will never forget. The email he had been waiting for weeks to read was late. At 3 p.m. he began refreshing his email over and over in hopes of getting his results. After getting off the phone with a friend who had asked about his application, the mail notification went off – he was officially a Duke Blue Devil.

“I was checking names,” he said. “Is this wrong, is this the wrong name?”

Just under two hours later, Yang was able to announce his admission at the Kokomo School Corporation Board of Trustees meeting while being recognized as a National Merit Commended Scholar.

The two most important factors to picking a college for Yang were school culture and academic rigor. With nicknames such as the “Harvard of the south” and the “Stanford of the east,” academic rigor will be plentiful at Duke.

The environment at Duke was also something very enticing for Yang. Between the Cameron Crazies camping out for basketball games and the school spirit, it was hard to say no to Duke.

“Duke had a supportive student network and also made an active effort to increase diversity, increase student involvement and just basically create a supportive community unlike some cutthroat colleges,” said Yang.

“At some of these schools there would be students who would turn off their roommate’s alarm clocks so that they don’t take the finals and so they get a better curve.”

Yang will be studying neuroscience while attending the university. Since seventh grade he has wanted to study medicine and eventually move into the neurosurgery field.

Before leaving for Duke,Yang has one semester left at KHS where he is a member of Student Council, National Honor Society, Health Occupation Students of America, Kokomo CEO Program and co-founder of the Entrepreneurial/Kokomo Business and Engineering Club

Yang said the scholarship has really big impact, making it possible for him to afford to go to an out-of-state university. Room and board being paid is a big weight off of his mind.

“… not all of the higher level schools provide free room and board,” he said. “Room and board is a significant sum, that’s like $17,000 right there. That’s an in-state tuition right there.”

Northwestern Middle School has introduced Rocky the Golden Retriever as its first ever facility dog.