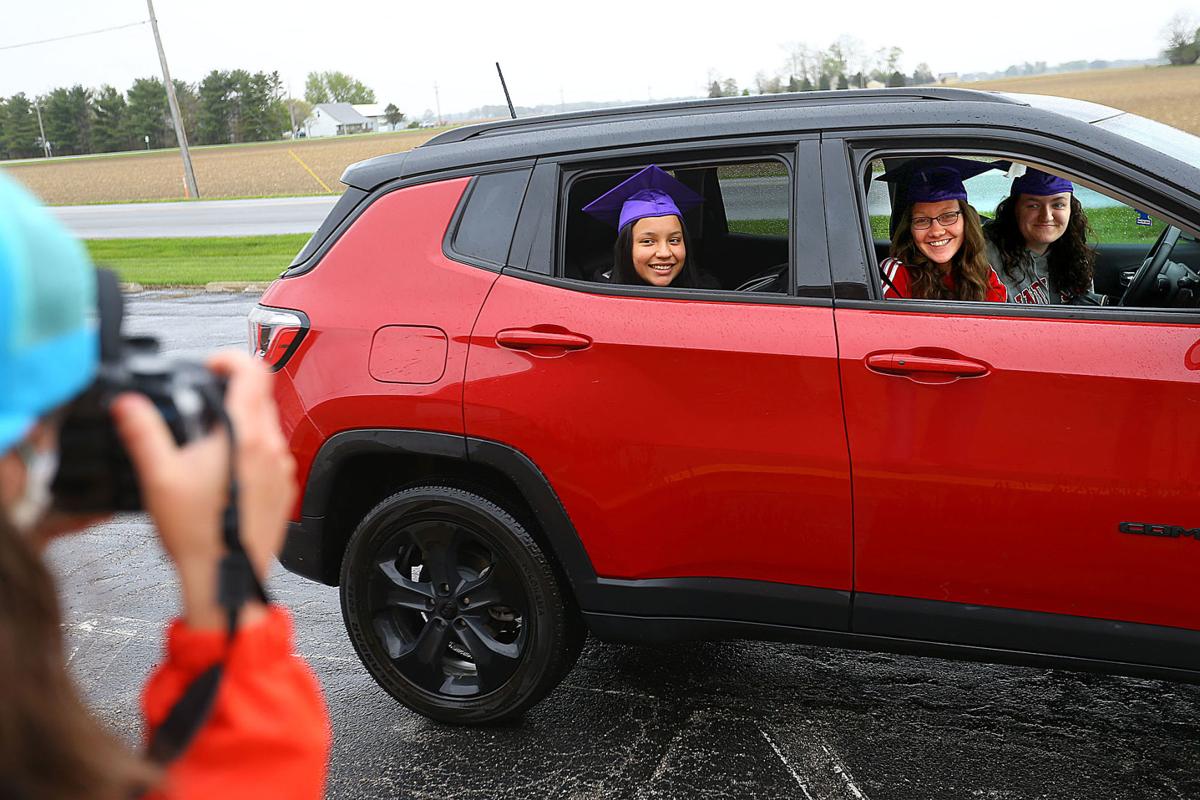 Northwestern seniors picking up their cap and gowns poaw for a drive-by photo with teacher Ashley Leidig are Marilyn Carmona-Torres, Michaelah Freels, Jenna Fridholm on May 5, 2020. With lockdown and social distancing from the COVID-19 Pandemic, students had to pick up and drop items drive-thru style. 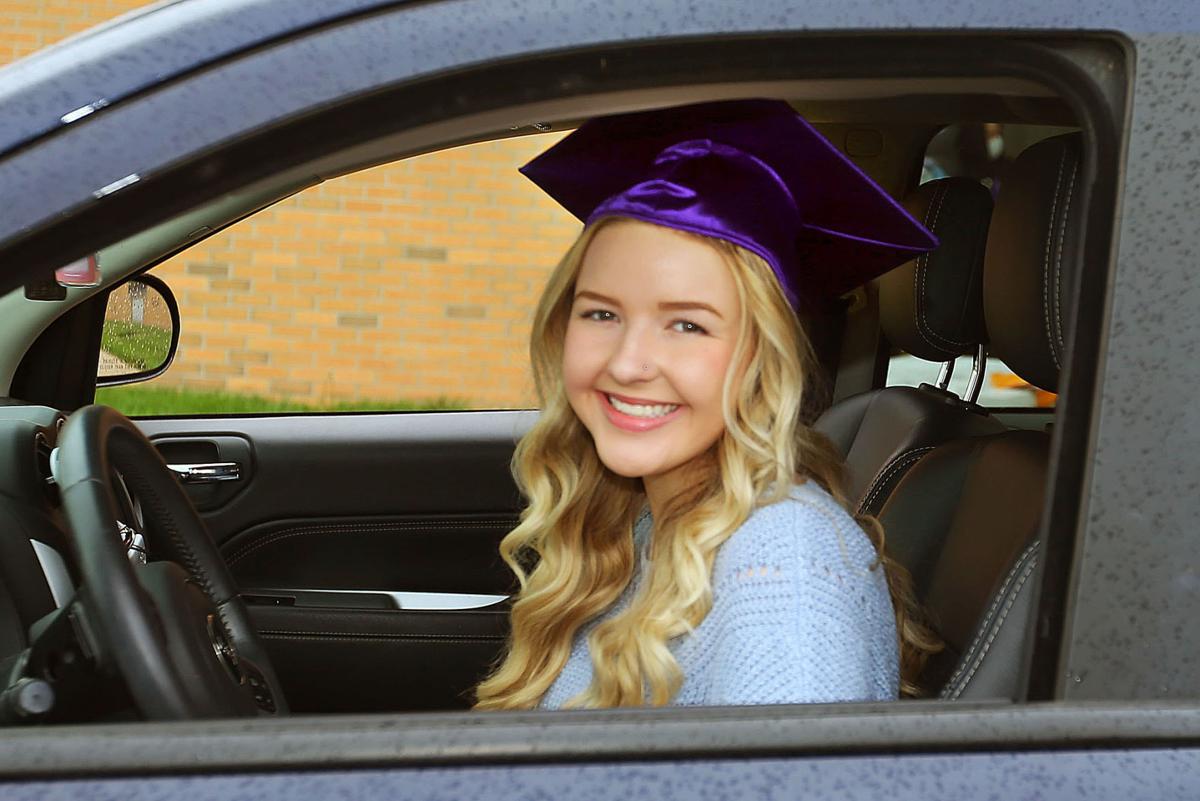 Ally Foster, a Northwestern senior picks up her cap and gown on May 5, 2020. 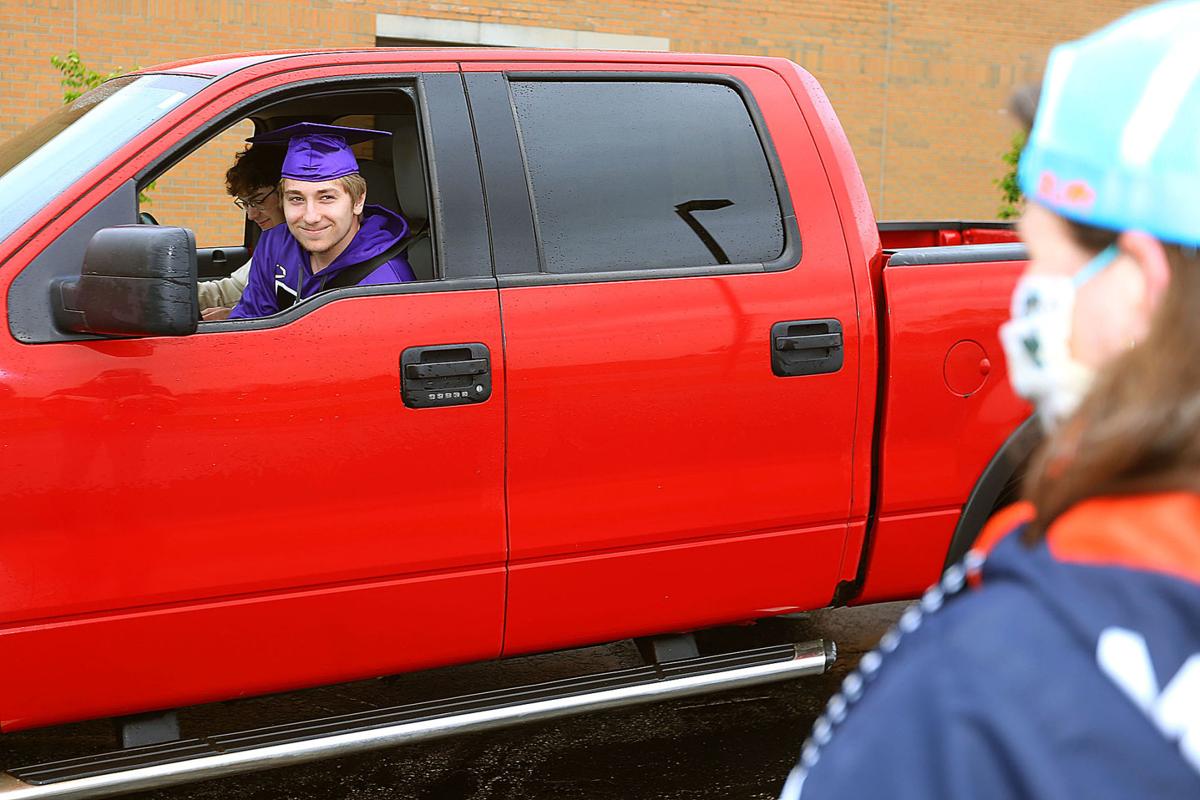 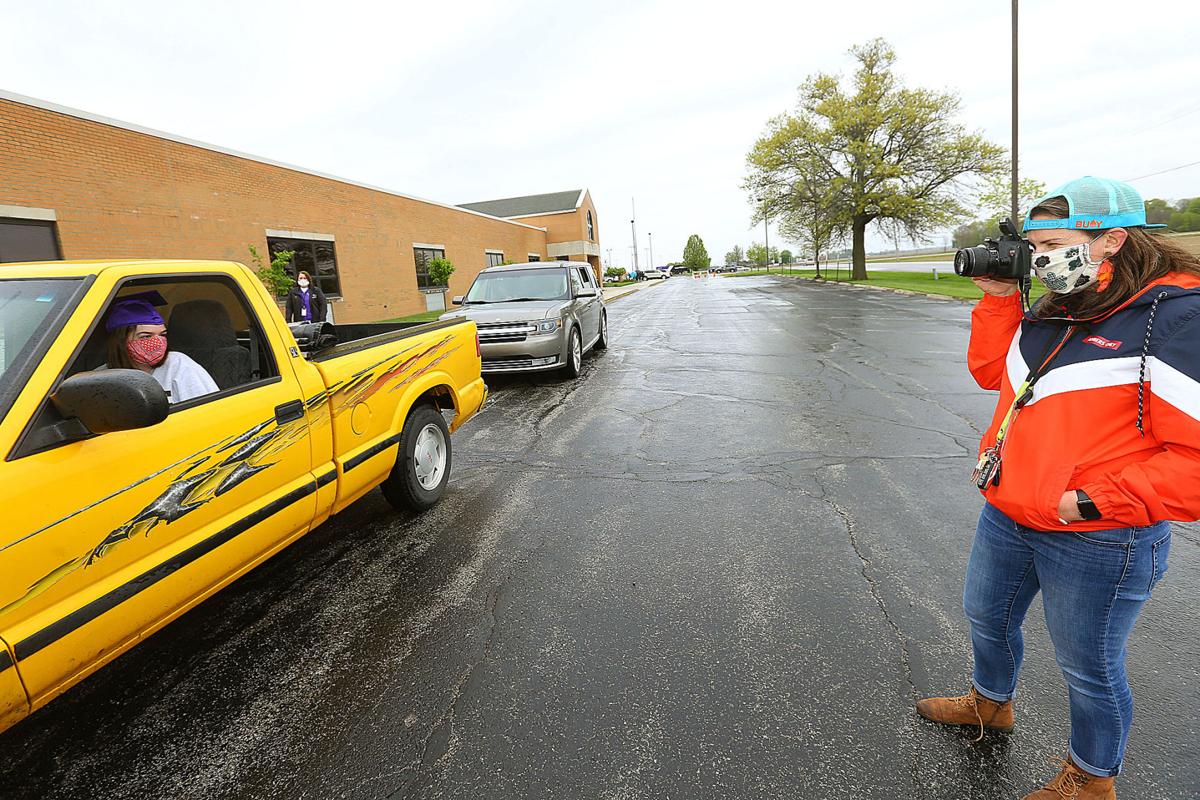 Lucy Baker, a Northwestern senior, picks up her cap and gown and poses for a drive by photo with teacher Ashley Leidig on May 5, 2020. 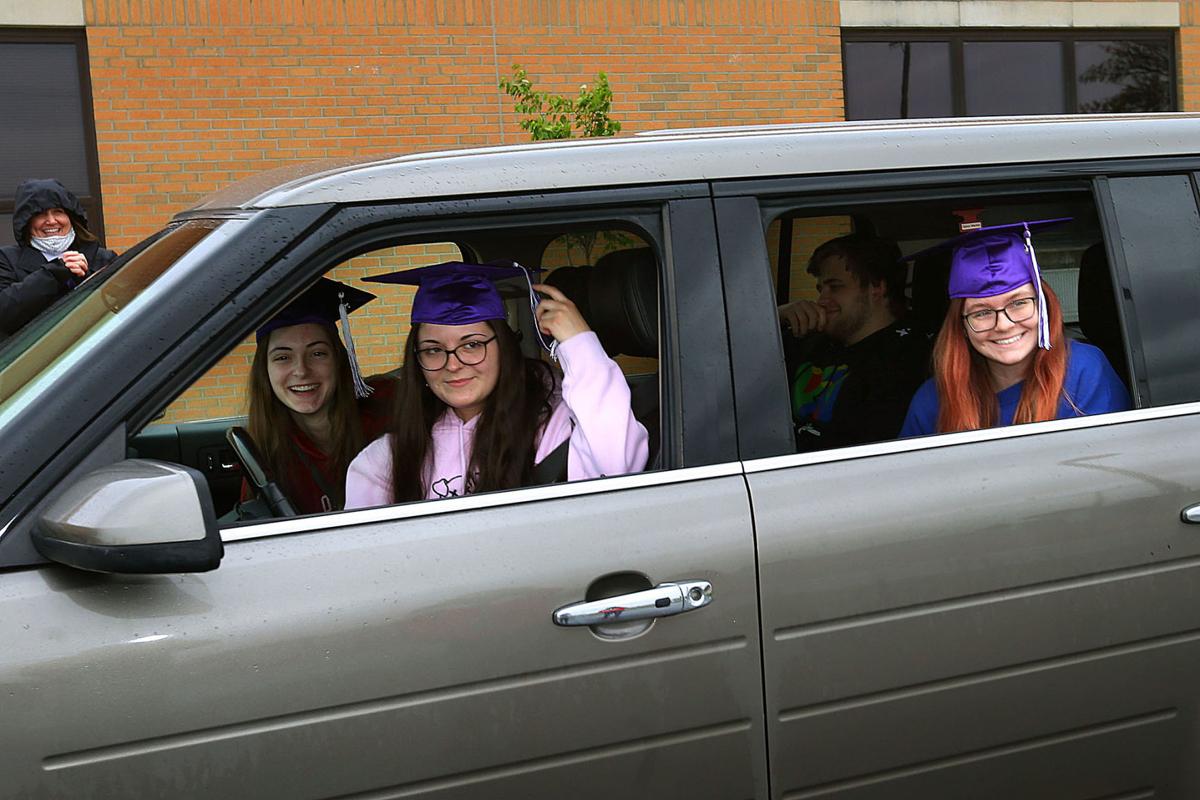 Northwestern seniors pick up their caps and gowns and pose for a drive-by photo with teacher Ashley Leidig. The students are Jessica and Eryn Bentley, and Lucy Calhoun on May 5, 2020.

Northwestern seniors picking up their cap and gowns poaw for a drive-by photo with teacher Ashley Leidig are Marilyn Carmona-Torres, Michaelah Freels, Jenna Fridholm on May 5, 2020. With lockdown and social distancing from the COVID-19 Pandemic, students had to pick up and drop items drive-thru style.

Ally Foster, a Northwestern senior picks up her cap and gown on May 5, 2020.

Lucy Baker, a Northwestern senior, picks up her cap and gown and poses for a drive by photo with teacher Ashley Leidig on May 5, 2020.

Northwestern seniors pick up their caps and gowns and pose for a drive-by photo with teacher Ashley Leidig. The students are Jessica and Eryn Bentley, and Lucy Calhoun on May 5, 2020.

Amid the COVID-19 pandemic, high schools across the nation are figuring out how to proceed with graduation events.

Kokomo School Corporation [KSC] has announced its plan to handle this year’s graduation by presenting the ceremony virtually.

In a letter sent home to parents, Kokomo High School Principal Angela Blessing addressed the situation and said she is heartbroken while explaining the steps being taken to celebrate the seniors.

Traditionally, the ceremony takes place at Memorial Gym, which seats 5,224, and an approximate total of 5,000 attend graduation each year, according to KSC Director of Communications Dave Barnes. Blessing cited capacity limitations, flattening the pandemic curve and social distancing as constraints leading to the decision.

Barnes said these graduation decisions were made by Blessing “after numerous consultations with district leaders, other high school principals, state officials; and most importantly, the KHS Class of 2020 class officers as well as other senior students.”

From May 26-29, students are able to schedule an individual diploma presentation which will take place at the KHS auditorium. Each student may bring four guests with them for the presentation. Each presentation will be recorded and aired for a virtual commencement currently scheduled to air at 7:30 p.m. June 5. The student will also receive a professional photo in their cap and gown with their diploma.

Blessing’s letter addressed the idea of changing the date was considered.

“While other possibilities and potentialities were studied and vetted, there were simply too many problems and roadblocks associated with these alternate plans,” she said. “Complications with changing the date of graduation and delaying the ceremony included student unavailability for later dates due to military commitments, work commitments, further education commitments, and much more. Moreover, a guarantee cannot be made as to when large gatherings may return.”

In response to the new plan, a petition has circulated on social media in hopes the school will change its decision and hold a physical ceremony at a later date.

The petition creator, KHS senior parent Sherisa Johnson, mentioned students already missing other milestones and points out students may have more than four people they would want to bring.

“These kids have gone through so much,” Johnson said. “So much has been taken away from them out of their control and I just think that Kokomo should not cancel their graduation altogether and do a virtual graduation. I think they should still be able to walk with their friends, just on a later date.”

As of Thursday morning, the petition has 672 signatures. She wants the school to follow other county schools in just postponing the ceremony.

Johnson feels the virtual ceremony has flaws such as being in an empty auditorium.

“Right now I don’t think we should cancel it. I think it’s early in the game,” she said. “Why cancel it altogether and we don’t even know what’s going to happen?”

As of today, there are no plans to change how the ceremony will be done.

After the announcement of Gov. Eric Holcomb’s five-step plan to reopen Indiana, many high schools are hopeful to hold some kind of in-person ceremony for the 2020 seniors.

Western High School Principal Steve Edwards announced this year’s graduation will be held July 24 to try to keep the tradition of Friday ceremonies going. An early August date is being examined as a potential backup plan. No decision on where to hold the ceremony has been made yet.

“We definitely want to do something for the kids before they go away for college,” he said.

Edwards added some type of video will likely be prepared in the event of a physical ceremony not being able to occur. He also noted it is easier for smaller schools to pull off theses ceremonies compared to schools with 400 or more graduates.

Graduation isn’t the only event finding a new date either. WHS prom has been rescheduled to July 30, according to Edwards. The event happening depends on government regulations in place at the time.

Eastern High School is planning on a July 19 graduation, which was approved at the May 12 board meeting.

“We definitely want to hold a ceremony,” Eastern School Corporation Superintendent Keith Richie said. “I’m guessing there will be some restrictions … but if we can hold in in a situation where it’s just parents and the kids and make sure we do social distancing – that’s what we’re hoping to do.

EHS Principal Brad Fugett said at the meeting details were still being worked out and there is a backup date plan of Aug. 2. If all options were exhausted, the school would look at a filmed and spliced together virtual ceremony.

Taylor High School looks to have its graduation ceremony July 24. THS Principal Eric Hartman knows there will likely be accommodations to be made from the traditional ceremony but is ready to “cross that bridge when we get there.”

“The seniors – they want to walk across that stage and they want their parents to be there,” Hartman said.

As is the norm currently, other backup options are being examined to ensure some kind of physical event can happen. Hartman said the current plan is to be optimistic and hope for the best.

Northwestern High School’s ceremony will take place July 11 in the high school gym. In a letter sent home to parents, it was confirmed social distancing guidelines will be in place, which will allow a set number of people to attend. The ceremony will be live streamed on Facebook and Twitter.

“Graduation is a rite of passage, one that is earned through hard work and perseverance,” said Northwestern School Corporation Superintendent Kristen Bilkey in an email. “When surveying our students, walking across the stage at graduation was the number one tradition they still want to experience.”