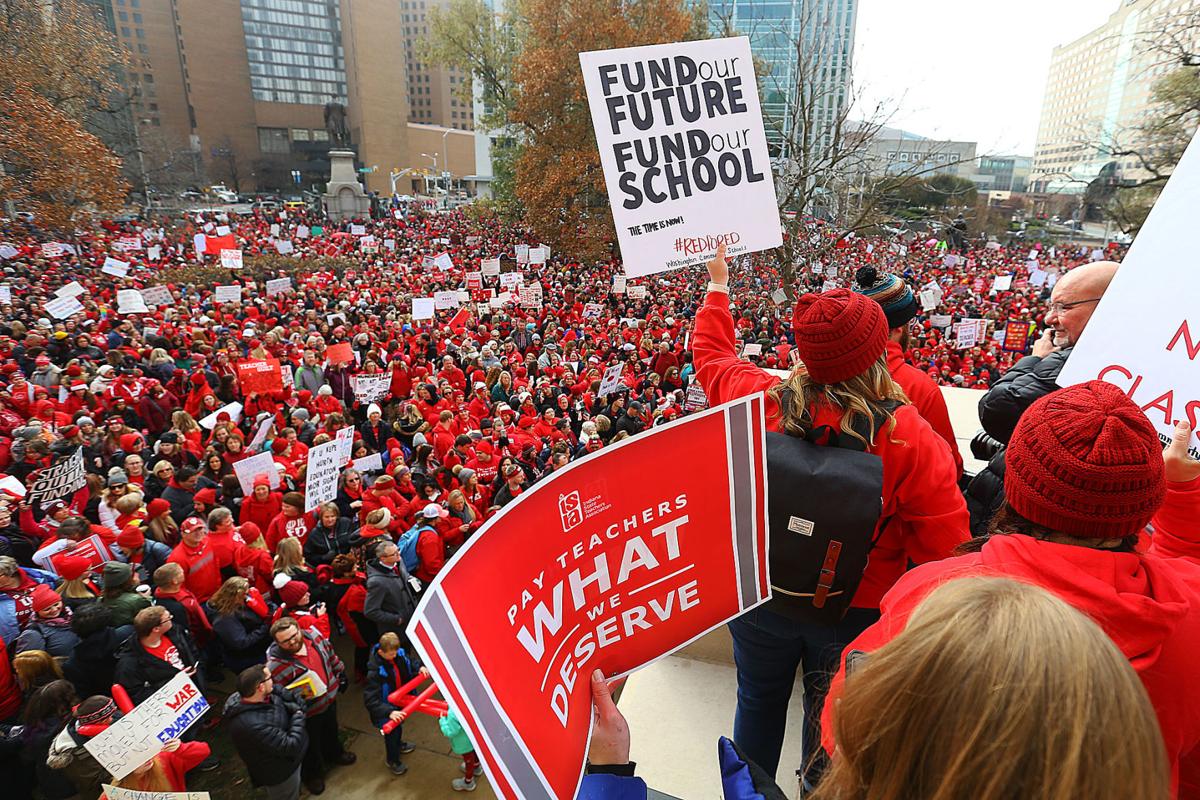 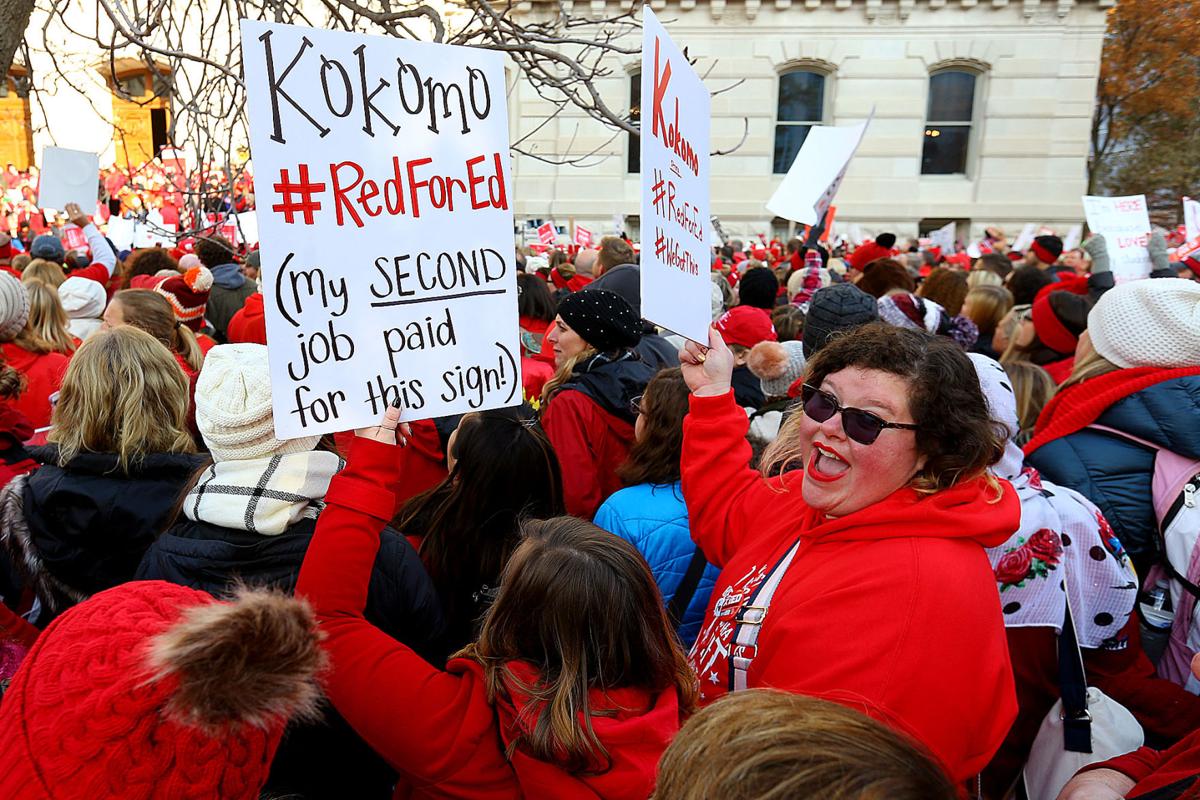 About 15,000 educators gathered at the Indiana Statehouse in Indianapolis on Tuesday Nov. 19, 2019. Kokomo teachers Kelcey Myers and Joybeth Bryan gathering on the south side. 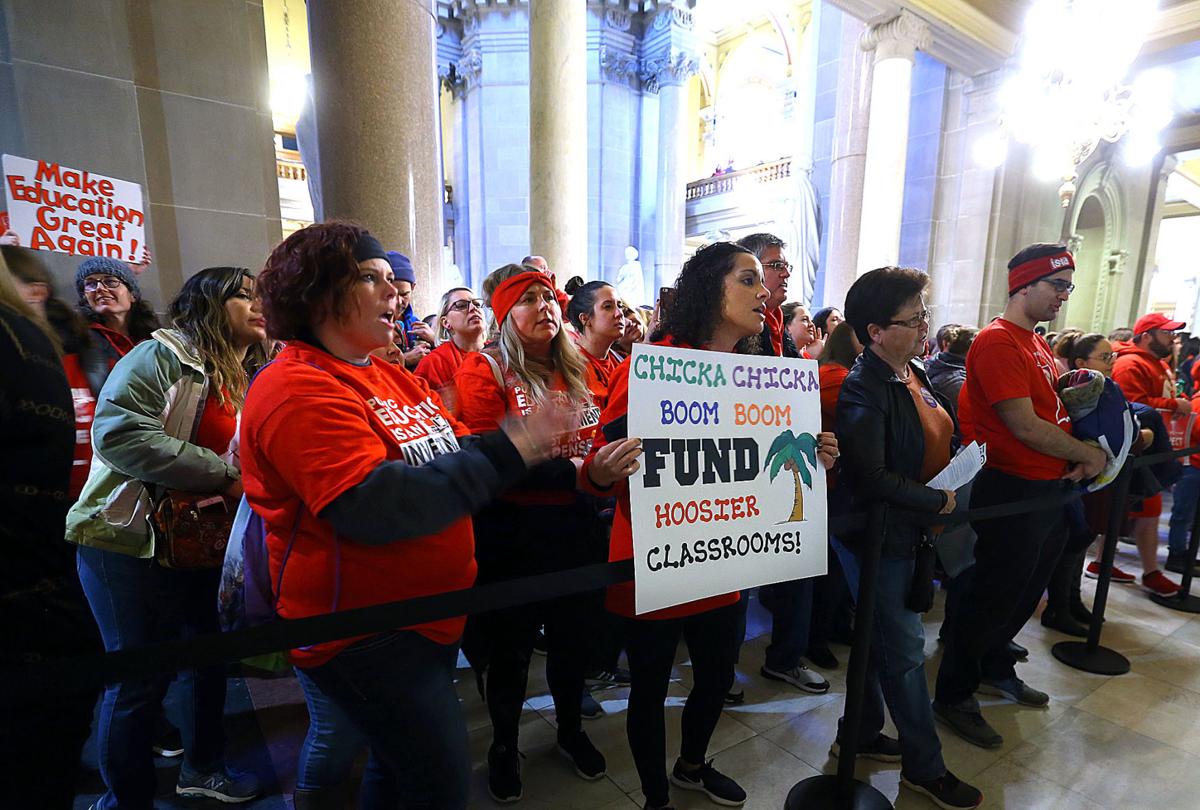 About 15,000 educators gathered at the Indiana Statehouse in Indianapolis on Tuesday Nov. 19, 2019. Kokomo teachers Kelcey Myers and Joybeth Bryan gathering on the south side.

Several thousand teachers wearing red rallied at the Indiana Statehouse on Tuesday to call for better pay and more respect from the state government in a protest that closed more than half of the state’s school districts for the day.

The union-organized rally represented Indiana’s biggest such teacher protest amid a wave of educator activism across the country over the past two years.

Local schools were well represented with educators from Howard, Miami and Tipton counties attending the rally. Western math teacher Chris Tuberty, along with second-grade teacher Kelly Tuberty, felt compelled to attend the rally because they feel legislators are steering away from what’s best for students and hope the rally educates the public on what’s at stake besides just teacher pay.

“We do need to attract good teachers out of college … but it is so much more,” Chris Tuberty said. “From state testing to the demands put on by the state, opportunities taken away from us as educators, not allowing us to make decisions on what’s best for our corporations and our classrooms.”

At the rally, teachers chanted, “Fund our schools,” and “Put kids first,” as hundreds of them lined the entrances to the Statehouse, many holding handmade signs with sayings such as, “Less Money on Testing, More Money on Students.” Teachers with marching band instruments played “We’re Not Gonna Take It” from the Statehouse steps.

Indiana State Teachers Association President Keith Gambill told a few thousand teachers on the Statehouse lawn that the Legislature should direct money from the state’s $2 billion in cash reserves toward helping schools.

“The crisis is now, and we need action now,” Gambill said to cheers from the crowd. “The issue is funding, and the state has the money.”

Taylor Education Association President Debbie Lewis has been visiting the Statehouse for years to lobby in favor of educators. She said she’s tired of meeting with representatives to just have them vote along party lines. She hopes this rally helped to get the message across.

“They’re not listening to the experts, who are us,” she said. “Hopefully this is a wake-up call to them that we’re tired of talking when nobody seems to be listening that has the power to make the changes.”

The rally came as legislators gathered for organizational meetings ahead of their 2020 session, which starts in early January. The unions said more than 15,000 people registered for the rally. Indiana State Police reported at least 5,000 people entered the Statehouse through public entrances, but the agency didn’t estimate how many total were on the grounds.

Kokomo Teachers Association President Nicole Fain Mundy said educators are fed up. She cited urban schools and small rural schools as those which have been hit hard with lack of funding. She said she’s tired of lawmakers under-funding educators and said salaries are not keeping up with inflation, the cost of living and the cost it took to get the degree in the first place while expecting more and more.

“You can’t keep taking from us,” she said. “We should be able to support our families without being worried about money and having second [or] third jobs.”

Another sticking point for Fain Mundy and others at the rally is the addition of having educators complete externships. The point of the externships is for teachers to be in touch with what the business world wants from their employees. She said it’s not rocket science to figure out what employers want out of employees.

“We’re education professionals. We’re educated,” she said. “Do you think that we don’t know what businesses want?”

Republican Gov. Eric Holcomb and leaders of the GOP-dominated Legislature have avoided direct criticism of teachers or school districts for the closings. They seem intent on not antagonizing educators as Kentucky GOP Gov. Matt Bevin, who lost his reelection bid this month, did in lashing out at teachers who used sick days to rally. However, they said they don’t expect to take action on further boosting school funding until at least 2021.

Other teacher protests were held last year in West Virginia, Oklahoma and Arizona.

While some Indiana protesters chanted, “Red for Ed,” in a Statehouse hallway, Indiana House Speaker Brian Bosma spoke before lawmakers defending the state budget approved by Republicans in April that boosted base school spending by 2.5% each of the next two years. Holcomb and GOP legislative leaders touted the plan as making strides toward improving teacher pay.

One of the protesters chanting while Bosma spoke was Taylor special education teacher Kristina High. Some of her concerns are standardized testing and changing the kindergarten entrance date. This new date is earlier while more than ever is expected from the kids, such as higher order thinking and depth-of-knowledge questions.

Bosma said lawmakers would take action to prevent the use of student test scores to evaluate teachers and schools after lower scores on the state’s new ILEARN standardized exam taken last spring — one of the top concerns of the teachers unions.

Teachers didn’t see Holcomb at the Statehouse on Tuesday. His office said he was keeping long-standing plans for traveling to Florida for a conference of the Republican Governors Association, which gave nearly $5.9 million toward Holcomb’s 2016 election campaign.

The governor said he was waiting for a teacher pay commission he appointed in February to make recommendations on increasing salaries by the end of 2020.

Education advocacy groups estimated this year that a 9% funding increase was needed to boost average teacher pay to the midpoint of neighboring states. Republican state schools Superintendent Jennifer McCormick has cited a study showing Indiana as the state with the lowest teacher salary increases since 2002.

McCormick, who has split from many fellow Republicans on issues such as the state’s private school voucher program, told cheering teachers that they weren’t “asking for the moon.”

“What a shame that it takes today to get what our kids deserve,” she said.

Maple Crest STEM Middle School sixth-grade grade special education teacher Rob Becker knows what he would say if he got the chance to speak face-to-face with Indiana legislators.

“Come into a classroom for a week and see the reality, because when you sit behind a desk and try to pass legislation you have no idea what we go through on a daily basis.”