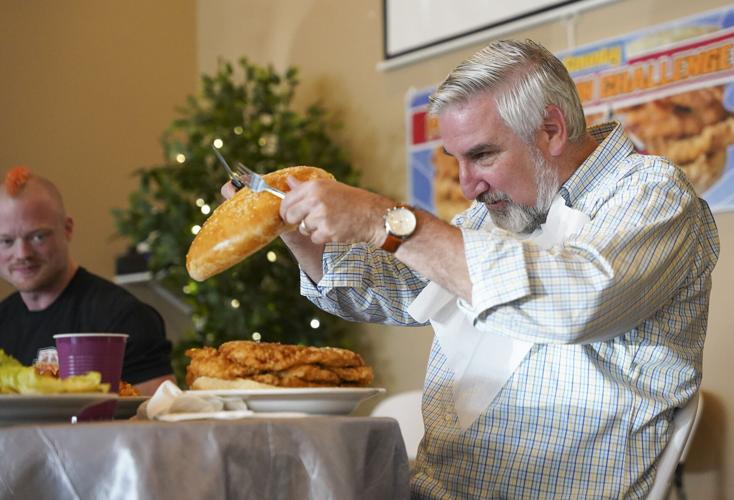 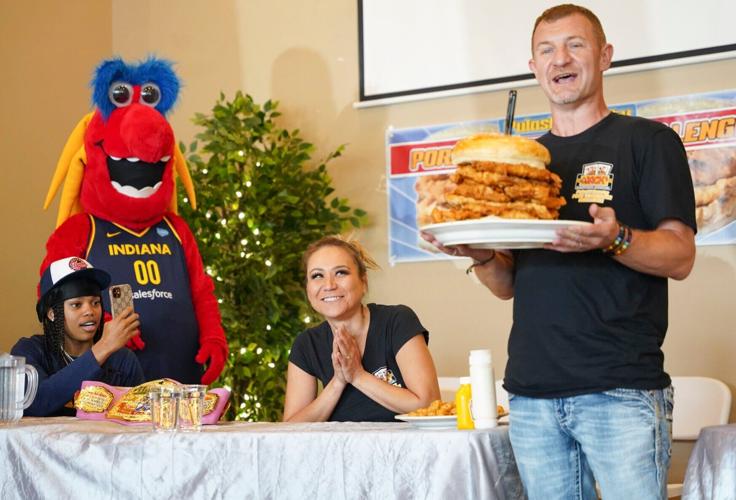 Miki Sudo, center, and Indiana Fever guard Destanni Henderson watch as Sudo’s plate is brought to the table during the Pulaski County Pork Tenderloin Challenge at One-Eyed Jack’s Celebration Station in Winamac on Friday. Sudo is the first person to complete a double portion of the challenge, which she did in approximately 41 minutes. 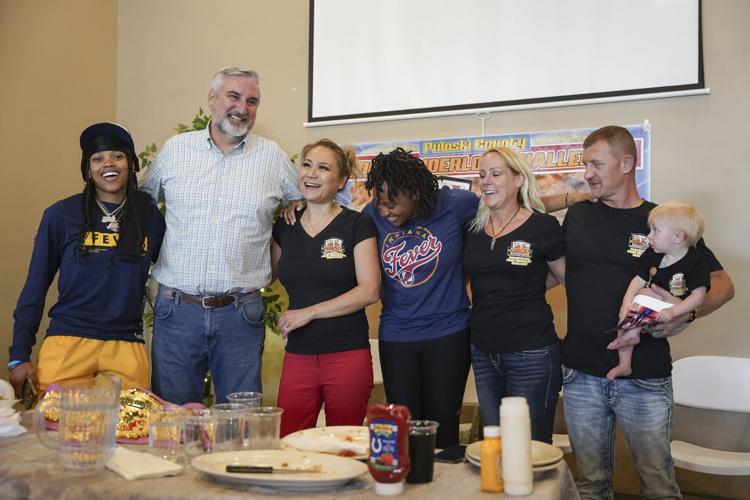 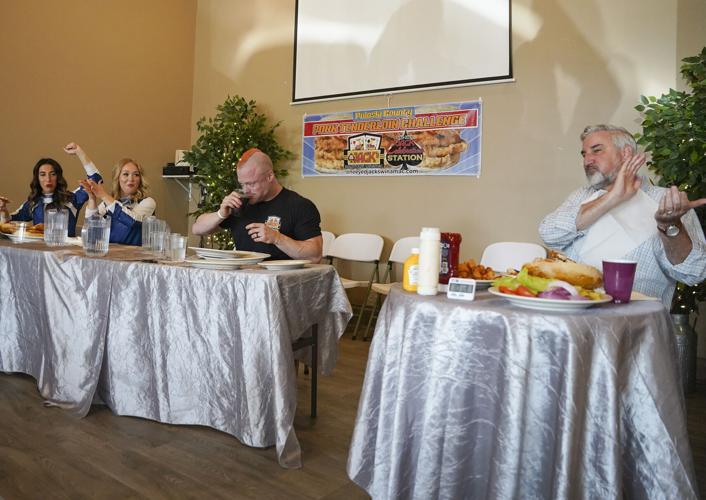 Nick Wehry, center right, is cheered on by Gov. Eric Holcomb and Indianapolis Colts cheerleaders as he finishes the tenderloin challenge at One-Eyed Jack’s Celebration Station in Winamac on Friday. 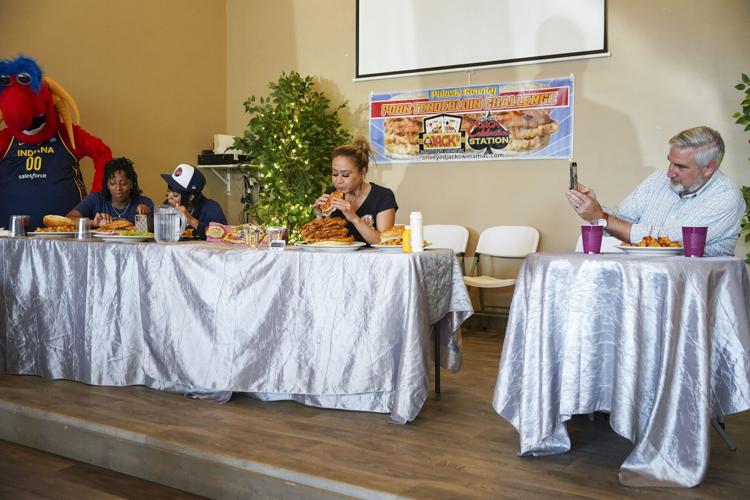 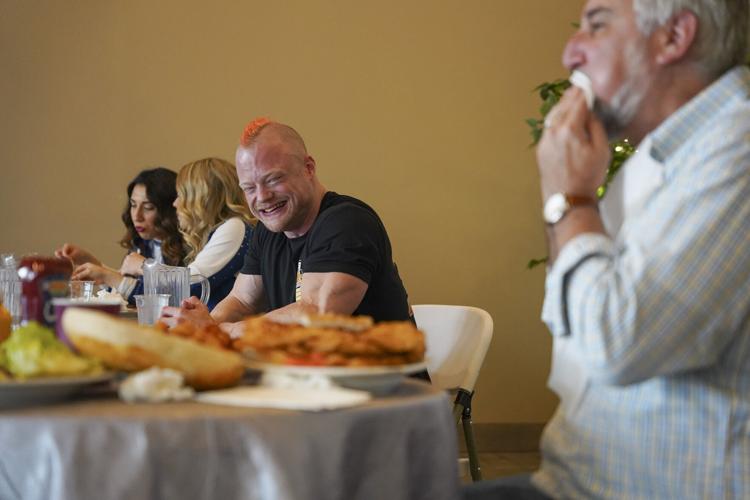 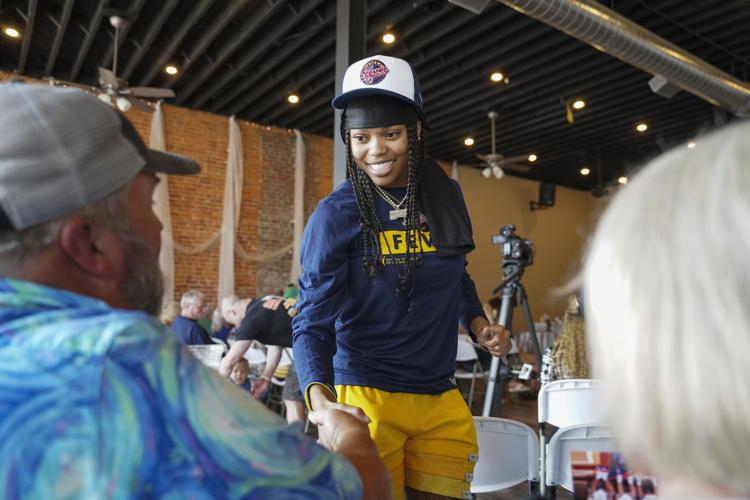 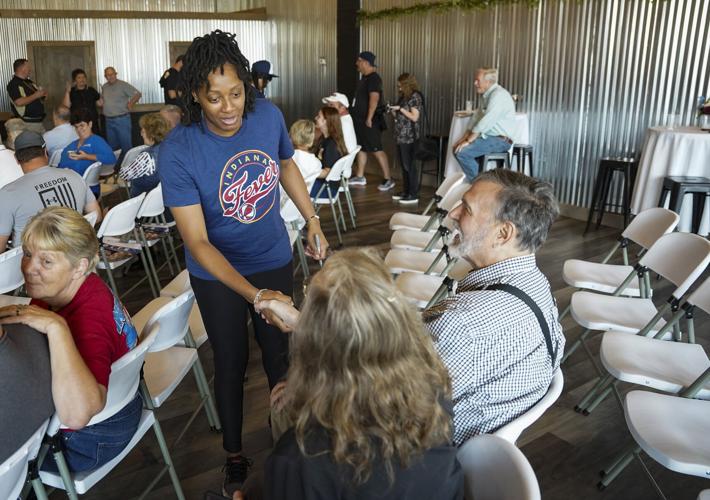 Miki Sudo, center, and Indiana Fever guard Destanni Henderson watch as Sudo’s plate is brought to the table during the Pulaski County Pork Tenderloin Challenge at One-Eyed Jack’s Celebration Station in Winamac on Friday. Sudo is the first person to complete a double portion of the challenge, which she did in approximately 41 minutes.

Nick Wehry, center right, is cheered on by Gov. Eric Holcomb and Indianapolis Colts cheerleaders as he finishes the tenderloin challenge at One-Eyed Jack’s Celebration Station in Winamac on Friday.

A governor, two cheerleaders, a couple of women’s basketball players and two professional eaters walk into One Eyed Jack’s.

It sounds like the start of a joke but no, it was all for The Pulaski County Pork Tenderloin Challenge, hosted by One Eyed Jack’s, 124 N. Market St.

Sudo is the number three ranked competitive eater in the world. Together, the couple have set multiple competitive eating world records and won eight Nathan’s belts.

Only five people have ever finished the One-Eyed Jack’s Titanic Two-Handed Tenderloin Challenge. Those who finish the challenge, which includes two pounds of tater tots on top of the seven pound tenderloin, eat for free, get a t-shirt and earn a spot on the restaurant’s wall of fame.

The competition was held inside the One Eyed Jack’s Celebration Station, 101 E. Main St.

“What we’ve brought together is really one of the biggest things this tiny town has ever seen,” said co-owner Mike Kasten. “This is just kind of the beginning of it. We’re going to head to the state fair next year and host the World Breaded Tenderloin Championship.”

Carson said people come from all over the state for a One Eyed Jack’s tenderloin.

“Our tenderloin is a little different from others,” said Kasten. “We don’t try to make it real thin. We like to make it thick, meaty and juicy. I think we produce one of the best tenderloin sandwiches anywhere. When I’m out somewhere and they have a tenderloin on the menu, I try it out, and I would put ours up against anybody.”

“We’ve been growing gradually with this over the last nine years, and this incredible crew of celebrity faces came here today to give us a big boost,” said co-owner Jenny Kasten. “We are going to have an annual event with the MLE (Major League Eating) and go from there.”

“I feel like I could find a La-Z-Boy and spend a few hours counting sheep,” the governor said following the event.

The governor spent a lot of the contest watching his competitor, Wehry, in awe. Wehry won the match in just nine minutes.

Anna McKinley, a long-time One Eyed Jack’s customer, was excited to see the buzz the event was creating in her “small rural community.”

“I love the atmosphere. I love the owners,” she said. “And the food is always good. They have good homemade soups and they have things for people like me who like cheeseburgers. But they also have a lot of good vegan and vegetarian meals as well.”

Before taking her place at the table, Indiana Fever point guard Kelsey Mitchell speculated that the eating competition may be just a tad more difficult than guarding recently-retired legend Sue Bird.

They said Fever rookies Queen Egbo and Emily Engstler would fare the best in a eating competition.

The Fever players said they recognized a lot of the hard work and do-it-yourself entrepreneurship that keeps counties like Pulaski and Cass up and running. Their league has survived and thrived with the same fight and attitude.

“There (were a lot of players in the WNBA) who paved the way so that we could be here,” said Mitchell. “For us to be where we are now, that’s a great experience. I think when you see the Fever and the WNBA play, we all have stories. People here who do it themselves, there’s also a story, and I think that’s what makes this better.”

The players put up a good fight, but both waved the white napkin, surrendering to the remaining food on their plates.

After a moments rest, they proceeded to shake every hand in the room and sign autographs.

Giving up to Sudo in the main event was nothing to get down about, though One Eyed Jack’s did try to stack the deck against the competitive eater, delivering her a plate with 14 pounds of tenderloin.

“It’s an honor to be part of this,” Sudo said before competing. “I love to support independently owned businesses. Just being part of a smaller community is a huge honor.”

And 41 minutes in, with Duran Duran’s “Hungry like the Wolf” providing the soundtrack and the governor leading the cheers, Sudo took the final bite of those 14 pounds of tenderloin.