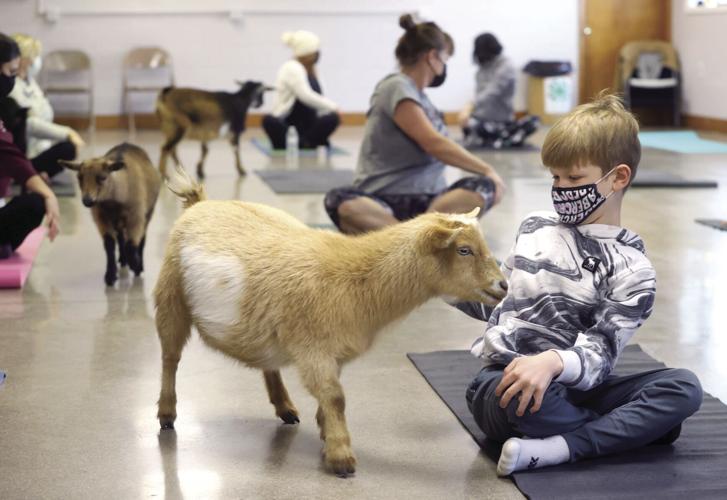 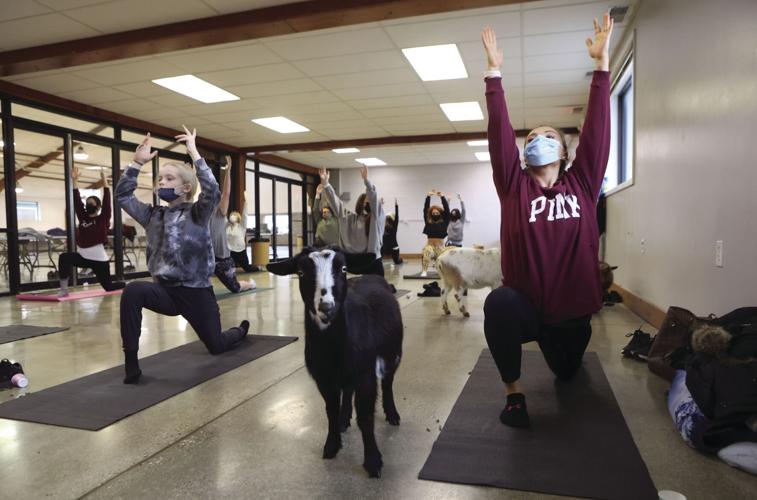 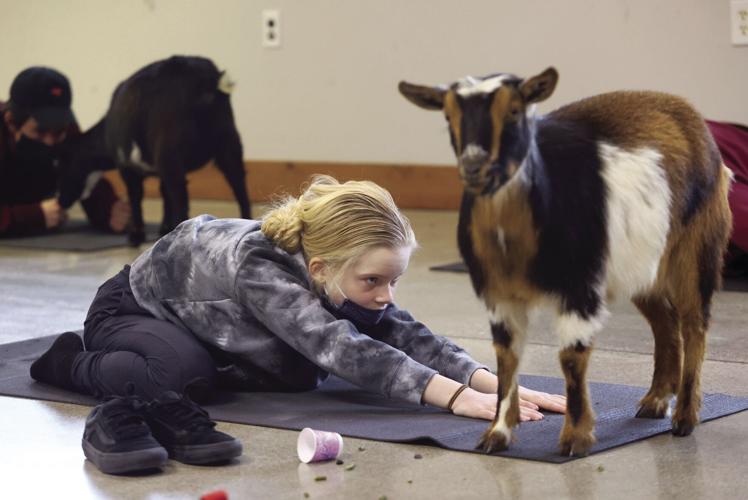 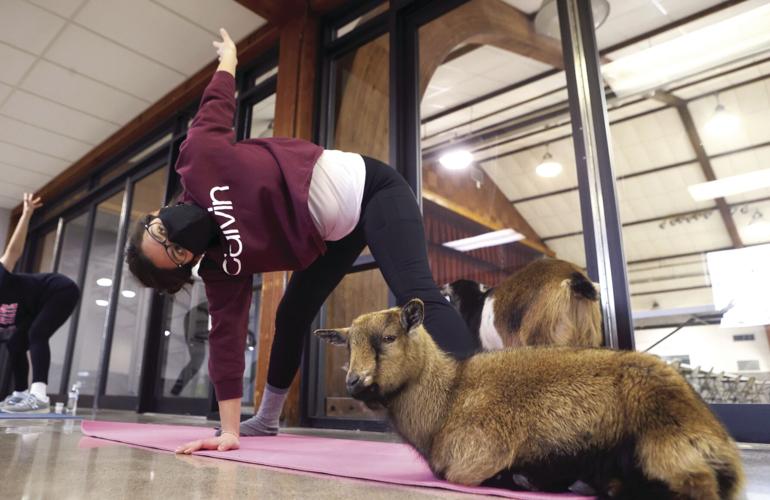 A goat relaxes on Carisa Aguilar's mat as she participates in Happy Goat Lucky Yoga at the Tipton County Fairgrounds on Saturday, January 22, 2022. Aguilar traveled from Muncie for the yoga class. Kelly Lafferty Gerber | Kokomo Tribune 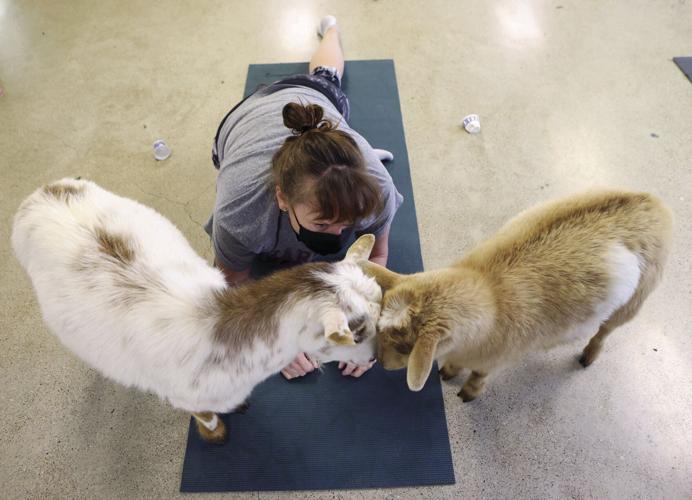 Christiana Mann from Muncie watches the goats go head-to-head as she does a yoga pose during Happy Goat Lucky Yoga at the Tipton County Fairgrounds on Saturday, January 22, 2022. Kelly Lafferty Gerber | Kokomo Tribune 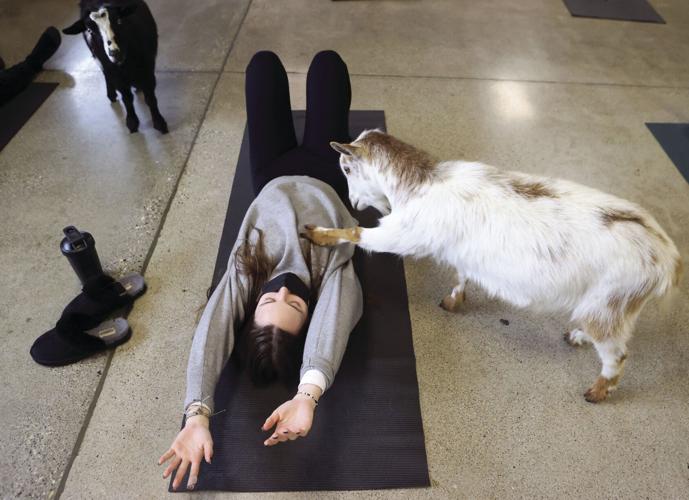 A goat gets in on the yoga action with Ella Greiwe from Fishers during Happy Goat Lucky Yoga at the Tipton County Fairgrounds on Saturday, January 22, 2022. Kelly Lafferty Gerber | Kokomo Tribune 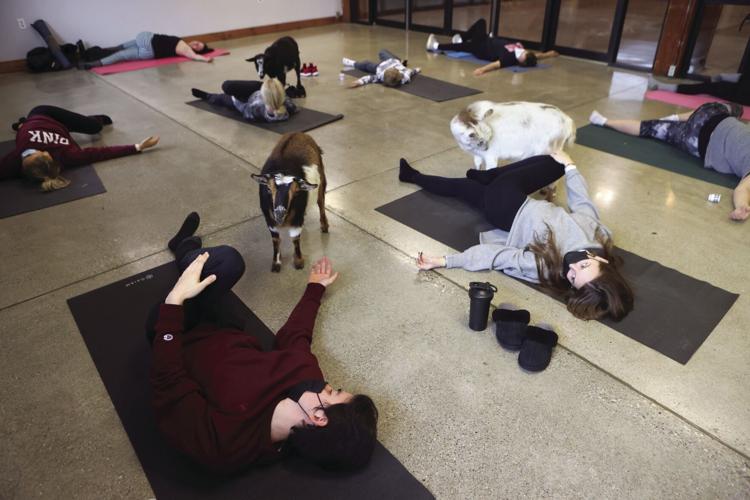 A goat relaxes on Carisa Aguilar's mat as she participates in Happy Goat Lucky Yoga at the Tipton County Fairgrounds on Saturday, January 22, 2022. Aguilar traveled from Muncie for the yoga class. Kelly Lafferty Gerber | Kokomo Tribune

Christiana Mann from Muncie watches the goats go head-to-head as she does a yoga pose during Happy Goat Lucky Yoga at the Tipton County Fairgrounds on Saturday, January 22, 2022. Kelly Lafferty Gerber | Kokomo Tribune

A goat gets in on the yoga action with Ella Greiwe from Fishers during Happy Goat Lucky Yoga at the Tipton County Fairgrounds on Saturday, January 22, 2022. Kelly Lafferty Gerber | Kokomo Tribune

Happy Goat Lucky Yoga is the outcome of multiple coincidences.

Owners Lynsay Riddle and Jordan Stevens had intended to purchase chickens at an auction when Stevens decided to bid on two goats instead. Riddle urged Stevens to stop bidding, but it was already too late — they had won the auction.

Their first goats were siblings named Octavius and Billie.

Stevens said she bid on the goats because they were cute. A man, who Riddle suspects was the previous owner of the goats, also encouraged Stevens to bid.

Neither Riddle nor Stevens knew anything about goats at the time, and they quickly discovered their new livestock were sick. It took about a year, and a surgery for Octavius, to nurse the goats back to health.

Roughly five years later, looking at an enclosure filled with a portion of Happy Goat Lucky goats, Riddle said she and her partner had been lucky. They still don’t know the exact breed of their first two goats, although Riddle suspects they’re a mixture of different breeds — too large to be Nigerian Dwarfs, like the majority of goats that go to the yoga classes, and too small to be considered some of the larger goat breeds.

Riddle said it took them about a year to feel comfortable with the goats. After, they returned to the same auction to purchase another goat.

“We’re still learning,” Riddle said. “Things pop up all the time that you know nothing about. You just kind of learn as you go.”

Riddle said she’s even learned to deliver goats. There was a complication the first time one of the goats gave birth on the farm. Miri was coming out head-first instead of hoof-first, which Riddle said could be “catastrophic.”

As the only person on the farm, it was up to Riddle to solve the problem. She pushed Miri back in, instincts kicked in, and both the mother and baby goat were safe.

The farm is now home to 26 goats, with six having been born on the farm in the past two years. When they aren’t in yoga classes, Riddle said, the goats are primarily kept as pets. She added that they planned to start selling some of the goats because the farm was reaching full capacity.

The farm stopped housing chickens a few years back, as Riddle suspected the chicken droppings were making the goats sick. Since she and Stevens appreciated the companionship of the goats more than farm fresh eggs, they decided the goats should stay.

Riddle and Stevens purchased a dog two years ago with the intent to train it as a livestock guardian. The Great Pyrenees-Anatolian shepherd mix, named Sheva, was only 9 weeks old at the time.

Sheva showed promise as a puppy, Riddle said. When she was young, Sheva could be trusted around goats without needing a leash.

As the dog grew, she became rowdier. Riddle said dogs usually take about two years to become reliable livestock guardians, but Sheeva still needs to be kept on a leash when entering a goat pen. Left to run free, Sheva likes to chase the goats around the enclosure.

For now, while Riddle and Stevens are trying to improve Sheva’s performance, the goats have taken to hiding in their shed when the dog approaches.

“She doesn't quite understand her job, as of yet, that she's just supposed to watch over them,” Riddles said, adding that the dog has shown improvement.

Riddle and Stevens had been watching the growing prominence of the Original Goat Yoga in Oregon when they decided they could try a similar project. Visiting farms across the state, they began stocking up on goats. The yoga classes started in June 2018.

Originally, the goat yoga classes were held in a Noblesville therapy office. Just before the pandemic, they moved the classes to the farm for convenience purposes. However, neighbors complained. Riddle said it had been her mistake and didn’t realize at the time they weren’t allowed to host the classes at the farm.

The classes are now held once a month at the Tipton County Fairgrounds. The goats ride in the back seats of a Ford Endeavour when traveling to classes. Typically, there are five or six goats in each class.

The actual yoga instructors are hired as private contractors. Riddle said they’ve used about 10 different instructors but try to keep a rotation of two or three at a time. They primarily find teachers through online job postings.

When hiring new instructors, they start by explaining the instructors must love animals.

“They need to know that they're not the star of the show, the goats are,” Riddle said. “You can't have a big ego about it.” She added that some students will only pay attention to the goats sometimes.

“We've never had a bad instructor. Everybody's always been really great, and they love these animals just like they're their own,” Riddle said. “It's a lot of fun. It's easy to get attached to them.”

The majority of the goats, Riddle said, are bottle-raised and used to being around people.

Four years after the start of Happy Goat Lucky Yoga, Riddle said she’s warming up to the idea of giving yoga a shot.

The goats, on the other hand, were very receptive to yoga classes. The goats who are brought to yoga classes at a young age are especially good around people, Riddle said, adding that the kids born during the pandemic can be a little shy of humans.

“I’ve only felt inclined to try the poses that help train the goats to jump on people’s backs, such as tabletop,” Riddle said, adding that young goats often try to climb on her shoulders, even when she’s minding her own business.

To find a schedule of yoga classes, purchase tickets or simply look at more pictures of the goats (and Sheva), visit www.happygoatluckyyoga.com.