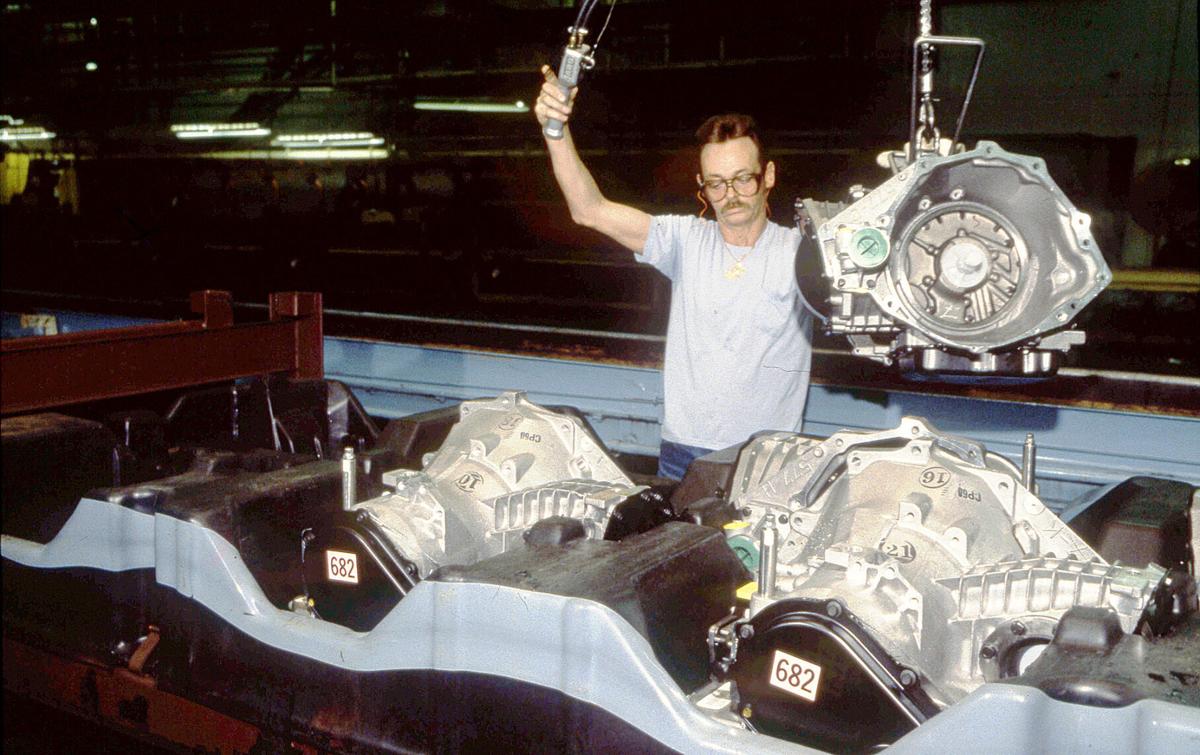 A Kokomo Transmission Plant worker on the 4-speed gearbox line, circa 1990. 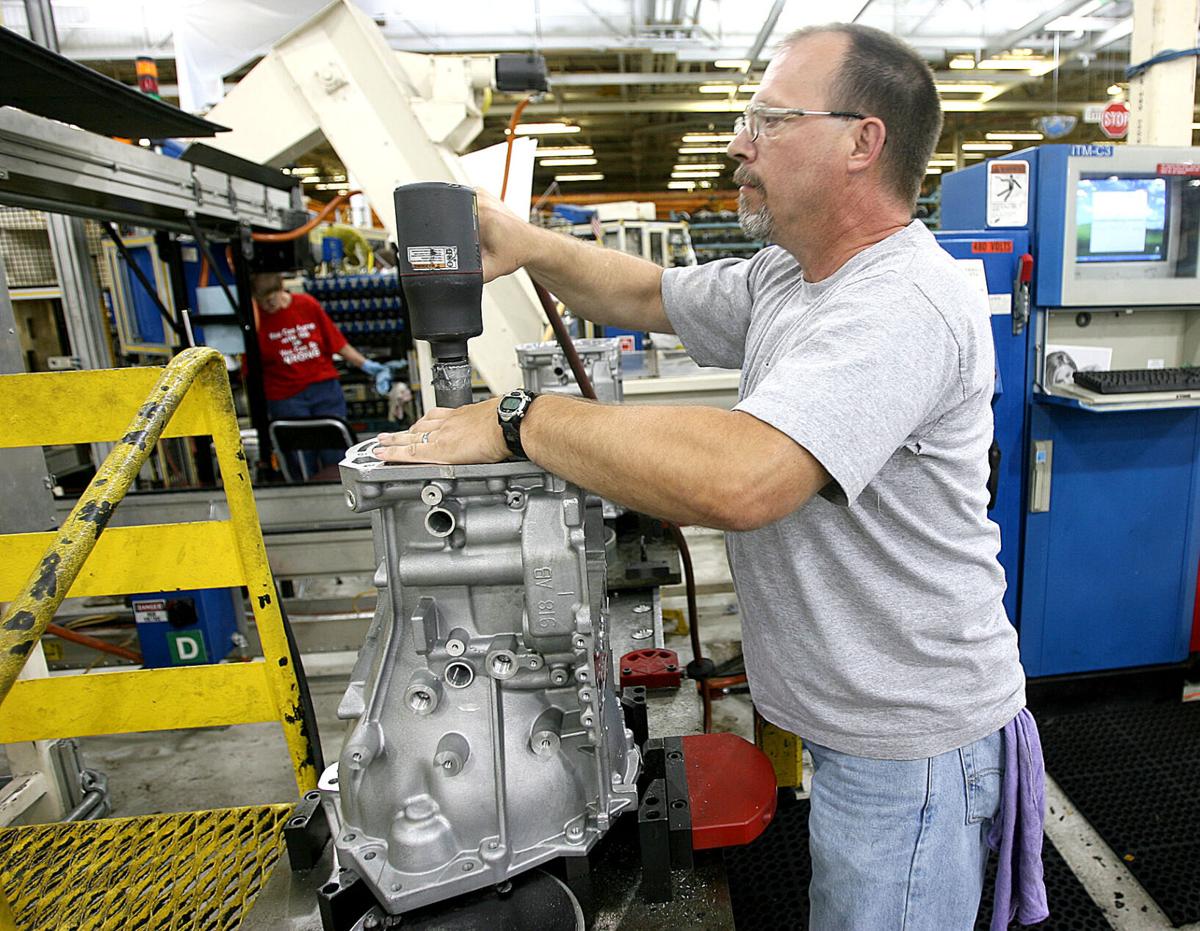 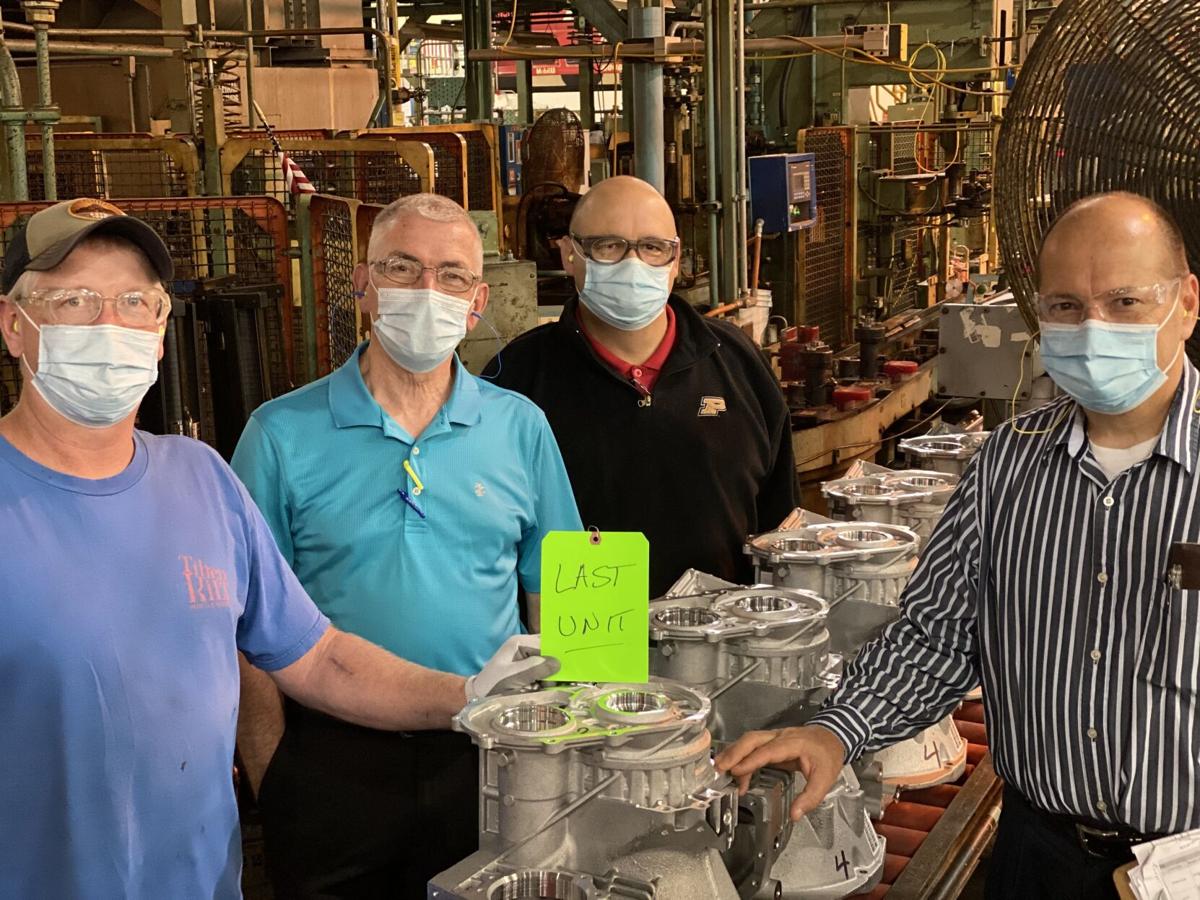 In 1988, a new product hit the floor at the Kokomo Transmission Plant. It was the 41TE 4-speed transmission – a cutting-edge piece of technology for the time that was the first fully adaptive electronically controlled automatic transmission in the industry.

Over the next three decades, the Chrysler plant would produce more than 17 million of the transmissions for dozens of vehicle models, which translated into more than 100 million work hours for local employees.

But today, 32 years after its launch, the last 4-speed transmission will roll off the line, bringing an end to one of the longest-running programs at the Fiat Chrysler plants – and the entire automotive industry.

Brad Clark, FCA’s head of engine and transmission manufacturing, said it’s almost unheard of for an auto part to be manufactured that long, and that fact is a testament to its brilliant engineering and design.

“I really appreciate those who back then designed it from a product and process side, and their innovation,” Clark said. “Thirty-two years. Over 17 million transmissions. It’s really an unbelievable lifespan for a product.”

Production of the 4-speed transmission began to gradually slow down after the plants launched the more fuel-efficient 8- and-9 speed transmission programs in 2013. Recently, the plant was only producing a little more than 200 day, compared to the thousands of 8-and-9 speeds that are made daily.

But it was the 4-speed and its innovative technology that laid the groundwork for all the other transmission lines at the plant, Clark said.

“If it hadn’t been for the 4-speed, I don’t think we would have had a chance to do these other programs that we’re doing today,” he said. “The product really leap-frogged us from the drive-train technology back then. It really set the tone for future transmissions by us doing that design.”

And no one knows that better than Clark. He was hired by Chrysler in 1988 and helped launch the transmission. He said it was a massive challenge that came with unique issues, but installation of the program was expertly carried out by a dedicated team of management and labor.

“When I walked in, I was 22 or 23 years old, and it was just a mammoth undertaking with the amount of equipment we were installing, on top of a using a new, innovative design,” Clark said.

That included bringing new processes and materials to the plant, like laser welding, that laid the groundwork for developing other transmission programs.

“The things the local workforce did to learn it all really set the tone for the next 30 years, and allows us to do what we’re doing today with the 8-and-9 speed transmissions,” Clark said. “It really set a pathway for us in Kokomo to build transmission, and give the company confidence in us.”

But the 4-speed transmission became more than just an auto part.

David Dukes, the manager of the Kokomo Transmission Plant, said it quickly became the bread-and-butter of the city’s manufacturing economy and cinched the city’s reputation as one of the nation’s automotive epicenters.

“When you think about what’s evolved from that transmission, it’s hard to quantify, but that transmission has meant a lot to Howard County and central Indiana and all the employees here at FCA,” he said.

And today, it’s going away – but not without a party.

Dukes said FCA has 3-D printed copies of the transmission, which they will give to employees currently on the line as a token for their work. There will also be a video presentation at the plant on Friday looking at the history and impact of the product.

When the last 4-speed rolls off the line, all the employees who helped make it will sign it, as well as other workers throughout the plant, and the part will be encased and preserved as a piece of FCA history.

“We have this motto here of City of Firsts,” Clark said. “You think about it, and this transmission was the first of its kind … But the motor behind all of it is the people of Kokomo and the employees.”

Clark said the transmission will go down as one of the most vital programs in the city’s automotive history, but what he’ll remember most are the people and workers who made it a success, and who helped establish a “can-do” local workforce.

“It means a lot to me personally and to my family, because it’s what gave me the opportunity to work at Chrysler,” Clark said. “The memories for me are really about the people and the relationships. But the bright side of it is the door that this opened for the opportunity for the products we’re making today.”

Dukes agreed. He said it’s hard to overstate the impact the 4-speed has had on the local economy, but in the end, what he’ll remember are the people he met through the program.

“When I go out there, I don’t just think about transmissions,” he said. “I think about the relationships I’ve built with people over the years – I think about learning how to solve problems as a team in critical situations. Those are things I really cherish.”

In the end, Dukes said the 4-speed may be going away, but there’s a lot more to celebrate than to mourn when the last transmission rolls off the line.

“It’s good to look back to where we came from, but what’s more is the excitement of where we’re going in the future because of what we’ve built off of the 4 speed,” he said.