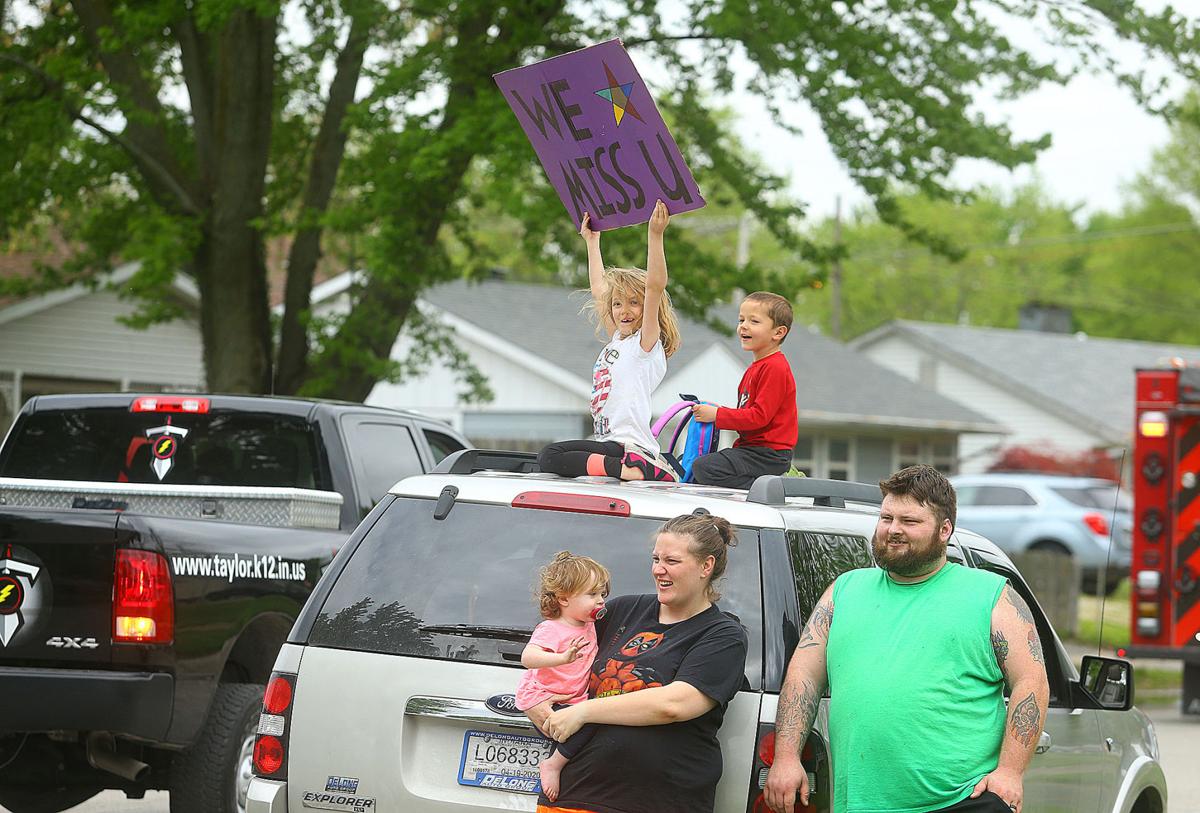 Elizabeth Doud, 6, holds a sign saying “We Miss U” as she, along with her family, Xyaine Doud, 4, Padme Faucett, 1, and Kathy and Thomas Faucett, watch Taylor Community Schools’ bus parade as they drive through Indian Heights on the last day of school, Thursday, May 21, 2020. 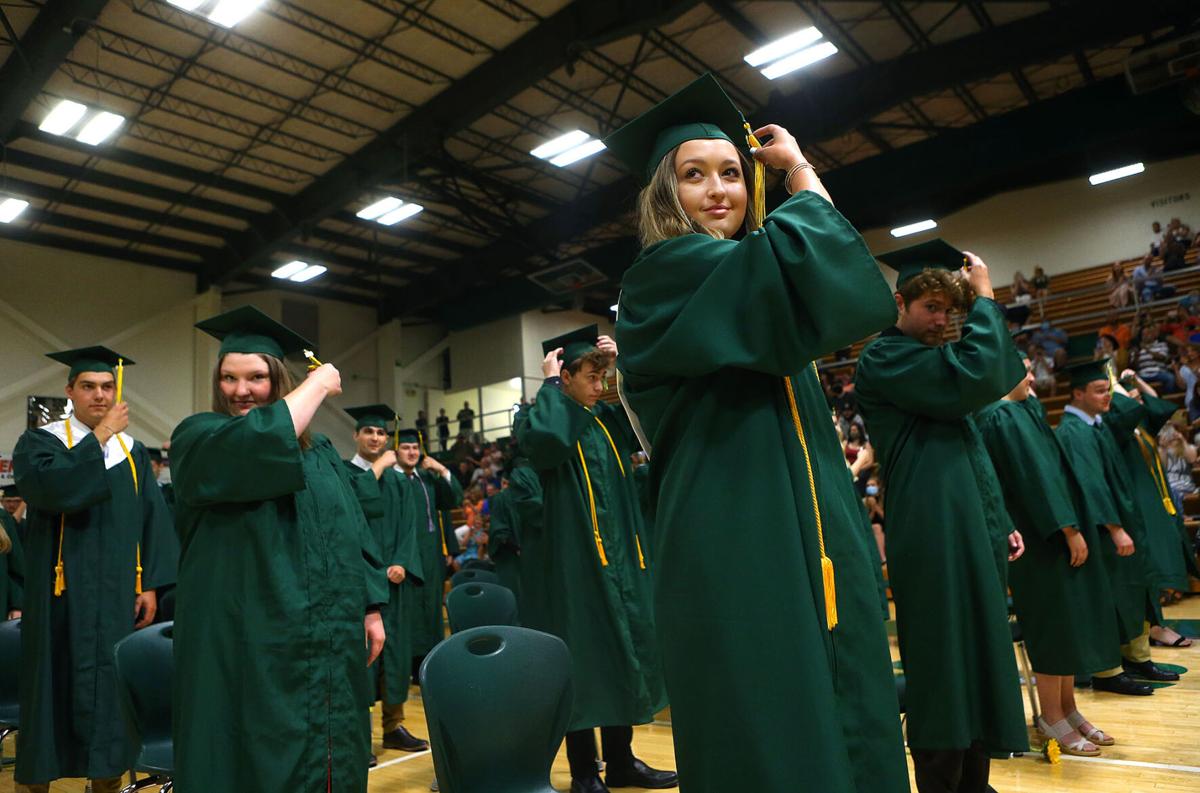 Allison Bratcher turns her tassel at the end of Eastern High School’s graduation in the summer. 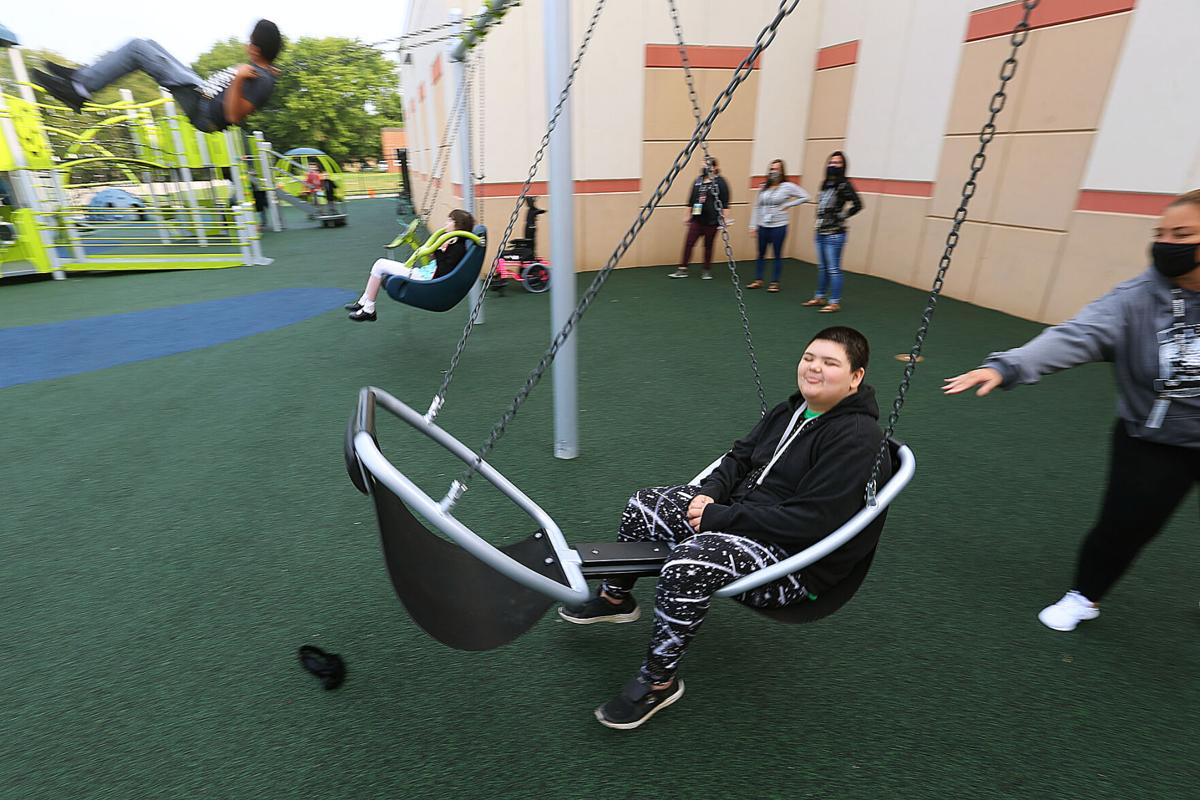 Elizabeth Doud, 6, holds a sign saying “We Miss U” as she, along with her family, Xyaine Doud, 4, Padme Faucett, 1, and Kathy and Thomas Faucett, watch Taylor Community Schools’ bus parade as they drive through Indian Heights on the last day of school, Thursday, May 21, 2020.

Allison Bratcher turns her tassel at the end of Eastern High School’s graduation in the summer.

In a school year unlike any before, students from all schools had to adapt to new models of education due to the growing COVID-19 pandemic and governor announcing the closure of all K-12 schools on March 20.

Moving from the traditional classroom setting to a digital landscape, many seniors saw their last year of high school play out much different than imagined at just this time last year. Through all the struggles, teachers, students and parents came together to make it through the unprecedented last few months of the semester and once again were able to return to school in the fall.

In late March, with their daily lives drastically altered, teachers and students alike had been doing their best to adapt to new education methods during the COVID-19 pandemic.

Teachers like Tipton Elementary School fifth-grade instructor Jessica Hendricks are using programs such as Google Classroom to meet with their students for the time being. The software allows teachers the ability for screen-sharing, presentations, interactive learning and sharing documents needed to complete the lesson, along with other features.

To make up for lack of face-to-face work, her class used Google Hangout sessions twice a day to video chat, get further instruction and have social interactions with her much missed students.

“I’m left with a blank computer screen and a pile of paper and some digital plans,” Hendricks said. “I don’t get to see what they’re learning or how they’re learning, so that Google Hangout has been a lifesaver to me.”

Hendricks and her co-teacher Hunter Walsh had to be more creative when it came to delivering educational content to their students by creating daily YouTube videos focusing on the lesson. In one of the videos, Hendricks and Walsh portray employees at the fictional Al’s Algebra Diner and explain how to solve algebra problems.

Leslie Lewis, a language and literature teacher in the International Baccalaureate Academy at Kokomo High School, said the immediacy of moving a curriculum from a traditional lesson to e-learning was a difficult adjustment, and also missed checking in on her students.

While 2020 seniors spent their final academic months in their homes learning online, many saw the hope for a real graduation ceremony slip away due to increased safety measures during the COVID-19 pandemic.

One way or another, all five Howard County schools successfully celebrated their seniors.

Kokomo School Corporation announced early on that its ceremony would be a virtual version with students coming in with limited family members. During the last week of May, the students would proceed across the stage and receive their diploma while being recorded. Later, the recordings would be put together to create the Kokomo High School 2020 graduation ceremony.

Maya James was one of the graduating class officers who helped with the direction of Kokomo’s celebration of seniors and said it was important for them to find the best alternative to a regular graduation.

“We knew that a lot of people would be very upset if they didn’t get to walk across the stage … and so we thought of a plan where we can have people walk across the stage still and put it all together into a video,” she said. “So, it’s still a virtual graduation but it’s not all virtual.”

The ceremonies for Taylor, Eastern, Western and Northwestern were all later in the summer when restrictions allowed for some spectators in a more traditional setting.

“There was doubt, when [Gov.] Holcomb chose to go to [stage] 4.5 instead of 5 we were extremely concerned,” Northwestern Superintendent Kristen Bilkey said before the July 11 ceremony. “I’m excited about today. I can’t believe we’re here and actually having the opportunity to provide the graduation for the students, so I’m thrilled for them.”

Students like Ally Ford, Dominique Beaty and Claire Nichols were all exhilarated the day actually happened and said they were willing to come back for the ceremony no matter how long it took.

“I’m really happy that I got to see all my friends again before we all go our separate ways and with everything going on, the fact that we got to get back together one more time just means everything,” Nichols said after the ceremony while taking pictures with Ford and Beaty.

In May, a teacher-organized parade set forth from the Taylor Elementary School, giving teachers and other school officials the chance to see the students they’ve missed so much.

“We’re such a close knit Taylor community that we really wanted to say goodbye to the kids,” kindergarten teacher and organizer Sarah Fleek said. “We miss them and know they miss us, so it’s our way of showing support to them.”

“I miss my kids – seeing their smiles.”

The long line of cars on parade, led by a fire truck, were adorned with balloons, messages of encouragement and creative signs.

Two days later on Thursday, two fire trucks, an ambulance and more led 10 Taylor buses through a similar route from the high school to reunite students with their bus drivers.

“I know they miss [the drivers] and you really just get attached to them,” Taylor Transportation Coordinator Cynde McQueary. “They’re like one of your own kids and you love them a lot.”

“It’s important that the kids know we haven’t forgot about them.”

Messages such as “we will get through this together” and “you are loved” were drawn on bus windows. Along the parade route, participants tossed items to the gathered students from their buses. Kids took home fun treats including candy and even special T-shirts to make the day a special moment.

A bus driver since October, Lisa Boring was ready to hit the pavement in her decorated bus that featured drawings of kids on the windows.

“When I do Buddy Bags – I’ve had one of them even cry because he couldn’t give me a hug. It’s been hard,” she said. “I love listening to them talk to me about their lives and what’s going on at home and school.”

In a letter published in June, the Kokomo School Corporation said it will have “important conversations” about racism, and identify actions to acknowledge and address injustices and anti-Black bias.

“We want our students to feel safe and secure in the knowledge that their lives matter – Black Lives Matter,” the letter said.

Superintendent Jeff Hauswald said the district decided to issue the statement after a teacher emailed administrators about posting something in support of Black students, saying, “I just think it would mean so much to our kids right now.”

He said the email came as school officials were discussing how to respond to the national conversation related to the “disproportionate risk Black people face in our society.”

“This simple request reminded school officials of the importance of making an anti-racist statement,” Hauswald said. “… One that tells our Black students that they matter; one that speaks to the important role that equity must play in education; and one that suggests specific tasks which Kokomo School Corporation staff can undertake in the upcoming school year.”

Those tasks include asking teachers and staff to educate themselves about race, anti-Black racism and white privilege. A reading list on those topics was provided to teachers and published on the district’s website.

Kokomo Teachers Association President Nicole Mundy said she supported the push by the district to review its practices, and is glad administrators are taking steps that will make the district more equitable for all students. She said most teachers feel the same way. She said while these conversations about racism and white privilege are more important than ever following the national conversations and protests, following the death of George Floyd who was killed by a police officer in May.

After more than a year of approvals, raising funds, installations and a pandemic, the all-inclusive playground at Western Primary and Intermediate schools is finally being enjoyed by students of all abilities.

Western Primary School gym teacher Tricia Harlow spearheaded the roughly $120,000 project to bring the structure to the students of Western School Corporation, an undertaking she referred to as a “humbling experience.”

“My heart has always been with the underdogs, whether that means disabilities or whether that means those that are picked on, I think God created me in a way just to make sure I’m always looking out for the ones that might be overlooked. And so just for many, many years I’ve noticed the kids haven’t had the same opportunities.”

The new playground helped fulfill Harlow’s dreams of giving those kids the same opportunity – those with and without disabilities a place to play together. The area includes harness swings and a friendship swing, which is two swings connected so kids can swing together while looking at each other.

It was important to Harlow that the new playground be a place of inclusion rather than just a separate space for those with disabilities. Having students be able to mingle and play together “where everyone is equals” helps the kids experience each other.

Harlow has already seen the playground bring joy to students. A general education student who uses a wheelchair was able to experience recess play with fellow students instead of playing with LEGOs, like he did formerly.

“The gen-ed classroom was already out on the playground … he [the boy in the wheelchair] was coming out with his other teacher and when the kids saw him come out, they were just so excited to include him and they wanted to be the ones to show him around – to show him what he can do,” Harlow said. “He looked at me and his little glasses were at the end of his nose … and he said, ‘This is the best day of my life.’”