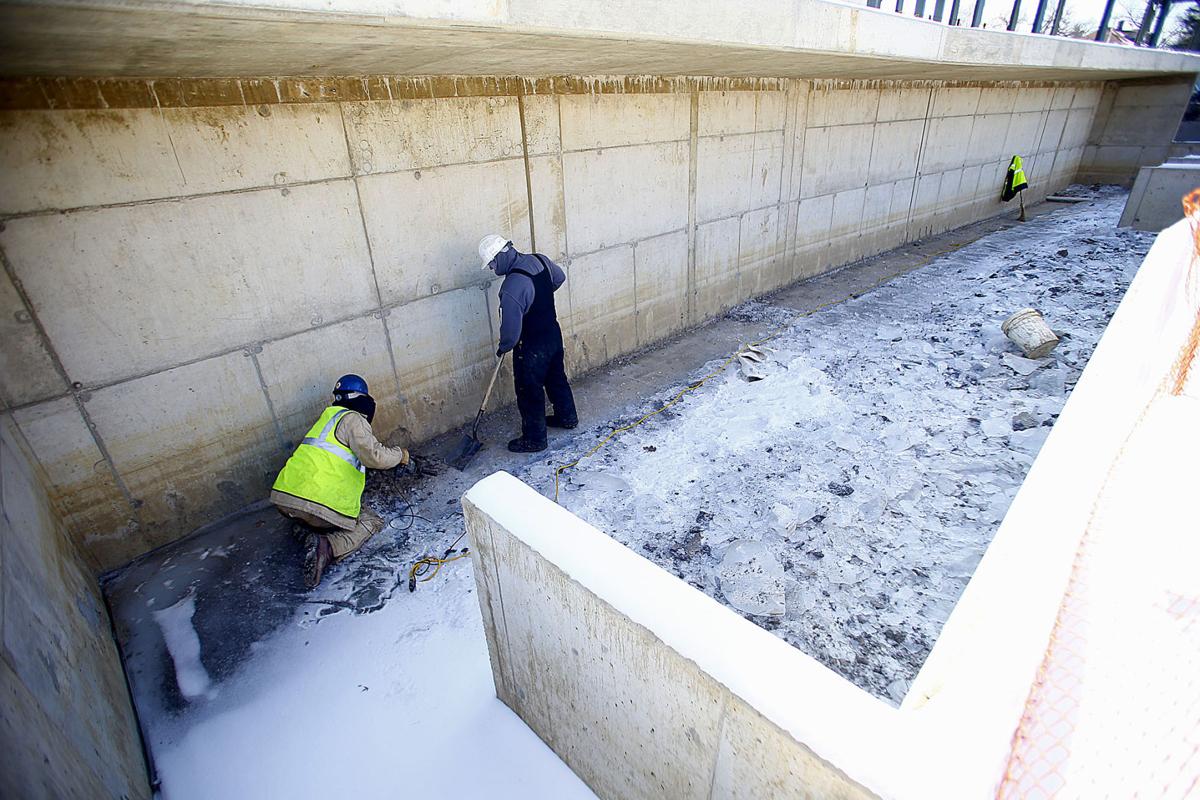 Work continues on the baseball stadium on Friday, Feb. 27, 2015. Jason Richey and Josh Myers from Benchmark Mechanical break up ice in the dugout to do work. Tim Bath | Kokomo Tribune 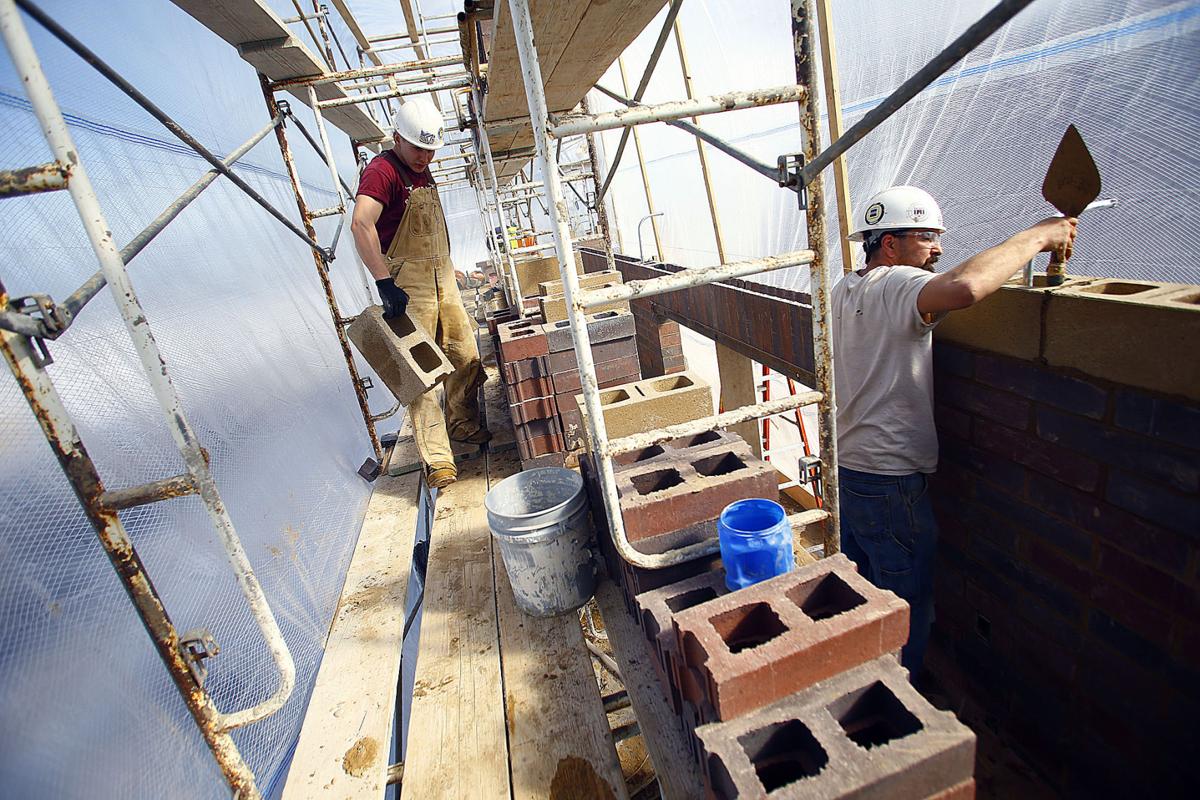 Bantley See and David See from Ziolkowski Construction work on the brick walls of the concession stand inside a heated dome that stops the concrete from freezing on Friday, Feb. 27, 2015. Tim Bath | Kokomo Tribune 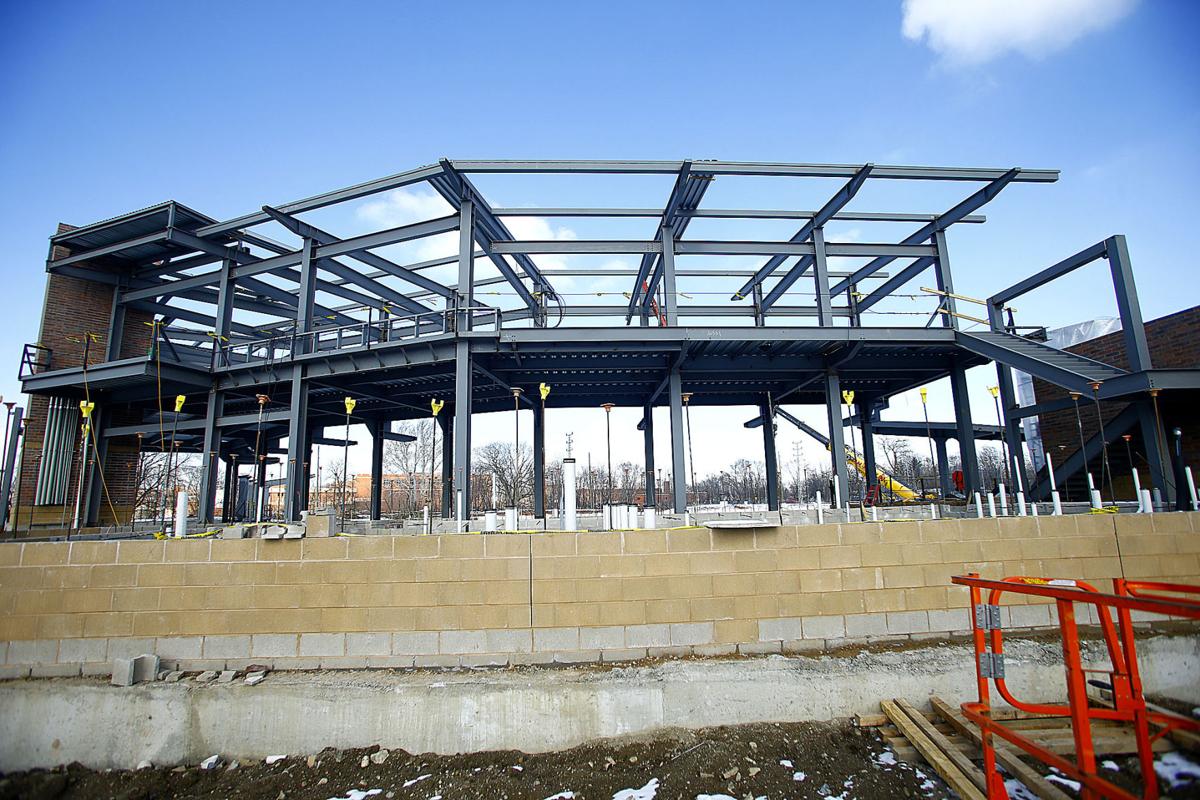 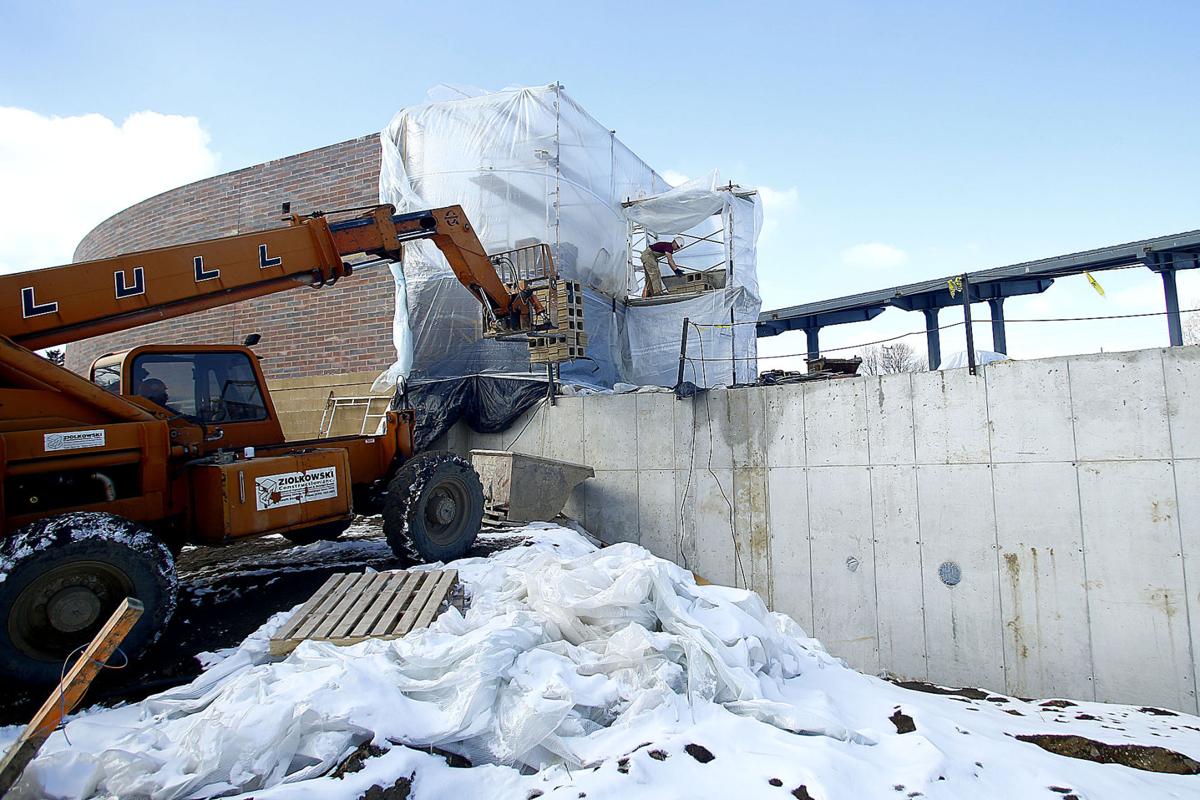 Bantley See from Ziolkowski Construction works on the brick walls of the concession stand inside a heated dome that stops the concrete from freezing on Friday, Feb. 27, 2015. Tim Bath | Kokomo Tribune

Work continues on the baseball stadium on Friday, Feb. 27, 2015. Jason Richey and Josh Myers from Benchmark Mechanical break up ice in the dugout to do work. Tim Bath | Kokomo Tribune

Bantley See and David See from Ziolkowski Construction work on the brick walls of the concession stand inside a heated dome that stops the concrete from freezing on Friday, Feb. 27, 2015. Tim Bath | Kokomo Tribune

Bantley See from Ziolkowski Construction works on the brick walls of the concession stand inside a heated dome that stops the concrete from freezing on Friday, Feb. 27, 2015. Tim Bath | Kokomo Tribune

The Indiana Department of Homeland Security announced Friday it would take legal action against the city of Kokomo over its baseball stadium project.

The move comes a day after IDHS announced the Federal Emergency Management Agency had informed the state that FEMA was suspending Indiana's ability to access the hazard mitigation grant program since several parcels of land used in Kokomo Muncipal Stadium remain out of compliance with use restrictions.

City Director of Operations Randy McKay said in a statement issued Friday, “We firmly dispute FEMA’s assertions that the eight parcels in question are not in compliance. We believe that the redesign plans are fully compliant with the deed restrictions placed on the parcels; that is why we filed suit against [Indiana Department of Homeland Security] on January 26."

"Kokomo has filed against us, so we are going to court, but that was our original intention," Erickson said. "They simply filed before we did. But the overall goal is still the same. That's to bring the properties back into compliance."

The city says it stopped building on the eight parcels in question when the IDHS issued its original cease and desist letter on Nov. 24, 2014, noting the violations. The city filed suit against the IDHS in late January.

Erickson explained the parcels were purchased with 75 percent FEMA funds, and as a condition, the parcels must remain in "open space." If not open space, the entity must receive prior approval from FEMA for alterations, Erickson agreed.

However, "FEMA has ruled that didn't happen," Erickson said. "It's because of fill [dirt] and because of concrete and other issues with the parcels."

The city has attempted to submit revised plans for the stadium.

“FEMA has not provided the City of Kokomo with any actionable, specific instructions for how to align the design with their demands," the city's statement said. "We have offered several alternative designs yet they provide no guidance for how we can address their concerns. They offer no explanation for their position.

“We are in continued talks with IDHS regarding this issue and our related lawsuit. We know the state understands the overreach of the federal government; Governor Pence and his departments have actively fought, or filed suit against, federal government overreach on the Affordable Care Act, Immigration Reform, Education Policy and other issues. IDHS has indicated a willingness to concur and support Kokomo’s position in recent discussions.

“We are evaluating FEMA’s current position and are open to discussing what change, if any, is needed to the project in order to bring finality to it. This political and bureaucratic interference may cause a delay, but we are committed to completing Kokomo Municipal Stadium.”

The City of Kokomo said IDHS approved parts of the project and issued permits late in the summer of 2014 to American Structure Point, the project designer.

The city also said it sent a letter to IDHS saying the city had heard rumblings there might be an issue with the project. At that time, the city requested a meeting to resolve any problems there might be.

The IDHS did not respond to that letter for 90 days, during which time other parts of the $9 million project were approved and construction began.

The IDHS said there is currently about $5.5 million in mitigation grant funding which will be affected by FEMA’S decision.

Erickson wanted to emphasize IDHS is talking about the entire state being affected.

"That makes it a much larger concern," he said. "We're certainly looking for quick remedies,  but these things take time. ... FEMA's goal is to bring those parcels back into compliance, which would return them to their original state."

The Kokomo Jackrabbits are expected to begin the home portion of their inaugural Prospect League season on May 30.

"We're still planning on being ready to go May 30, even after this developing news," said Van McNeil, Kokomo Jackrabbits Public Relations Director.

City officials said no further statements or interviews regarding the subject would be granted due to ongoing litigation.

State Sen. Jim Buck’s "cease and desist" bill was held today by the House of Representatives…

State Sen. Jim Buck’s "cease and desist" bill was referred to the House of Representatives’ …

The Federal Emergency Management Agency administers several different types of grants. FEMA has suspended one type of assistance to the entire state. Kokomo’s continued noncompliance could result in the city being ineligible for other types of aid.

Hazard mitigation assistance: This is what the state of Indiana is no longer eligible for, according to FEMA’s letter, and includes the type of grant the city accepted in 1999 to reduce the effects of flooding. The grants help communities to protect life and property from future natural disasters.

Disaster assistance: The entire state of Indiana, including Kokomo, is still eligible for this type of grant. The letter states the city of Kokomo cannot make any disaster claims or seek any type of federal disaster relief for the properties in question. That means, should the baseball stadium flood, the federal government would not help the city recover its losses. Kokomo applied for this type of assistance after a record flood in April 2013, a tornado in November 2013 and a severe winter storm in January of 2014, none of which was granted.

Tipton and Miami counties to be affected by FEMA suspension

The year in review: January and February

Editor's note: Leading up to New Year's Eve, the Tribune will look back at those stories that grabbed local headlines this year. Today we reme…