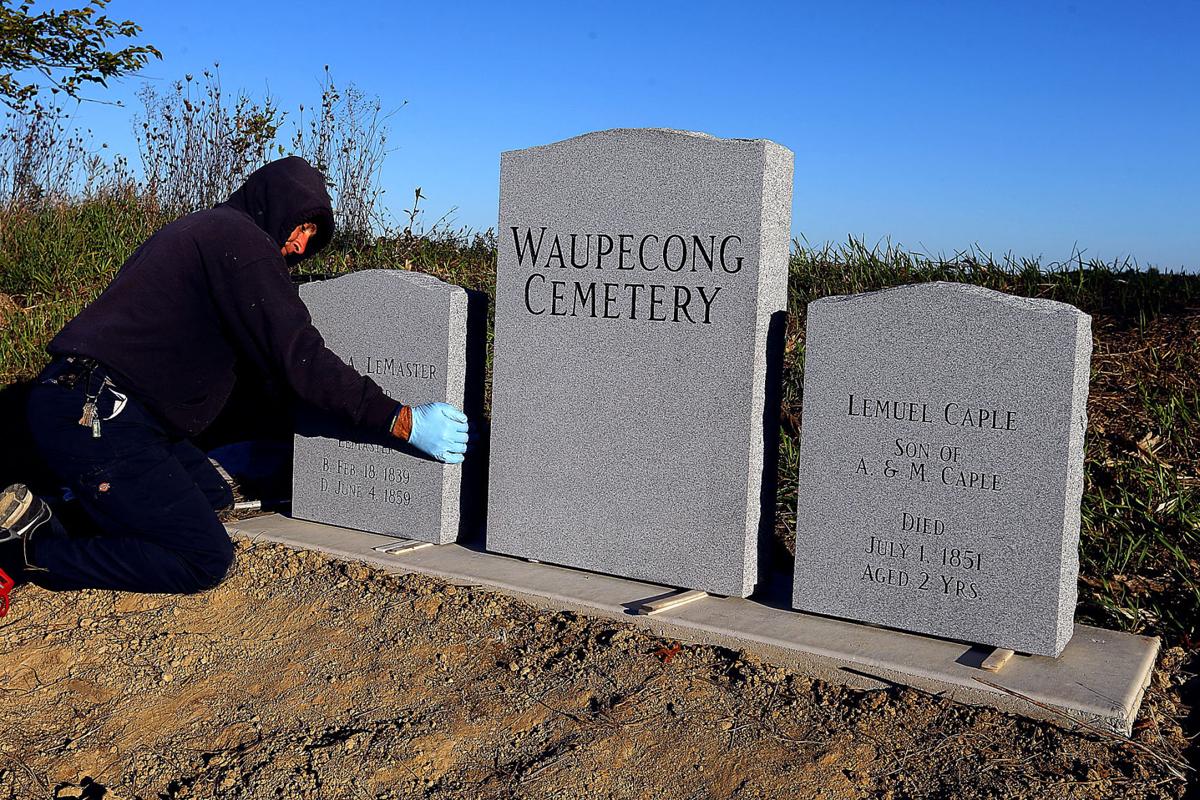 Gravesite markers are installed at Waupecong Cemetery on Oct. 10, 2016. Chris Brooks from Caldwell Monument Co. straightens the markers before they are secured. Tim Bath | Kokomo Tribune 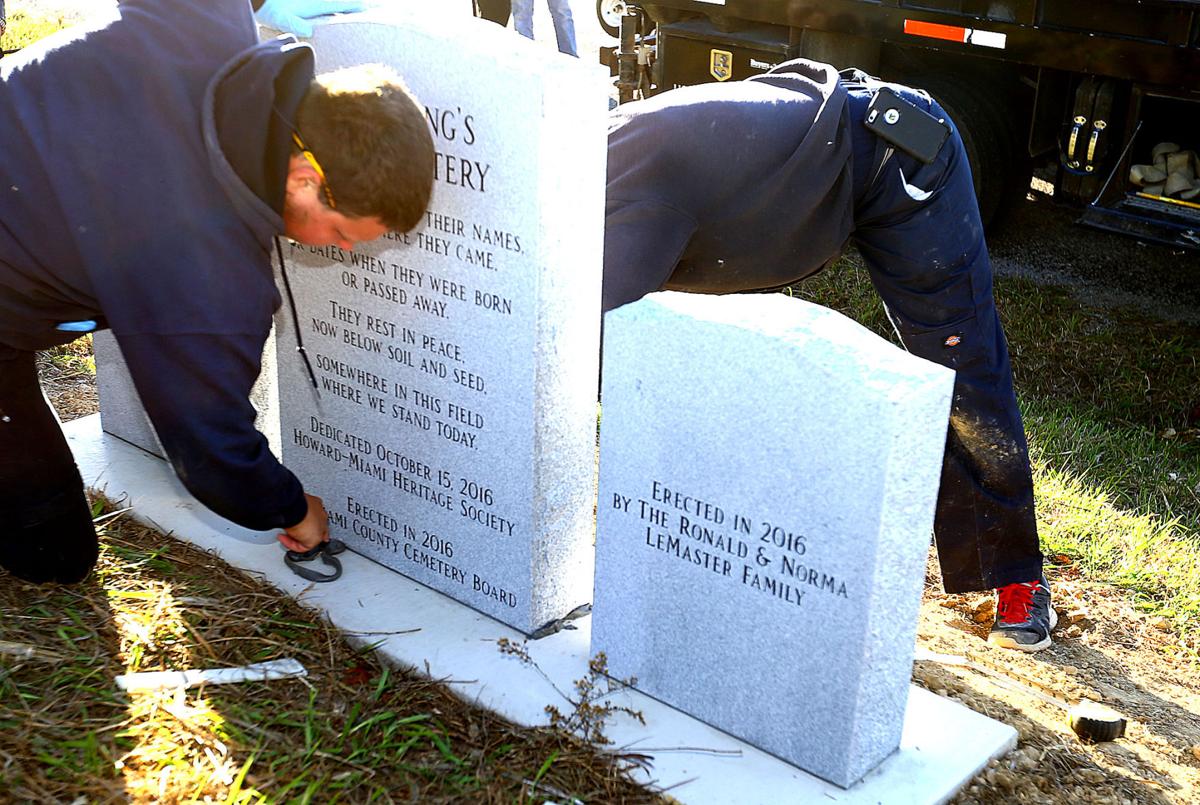 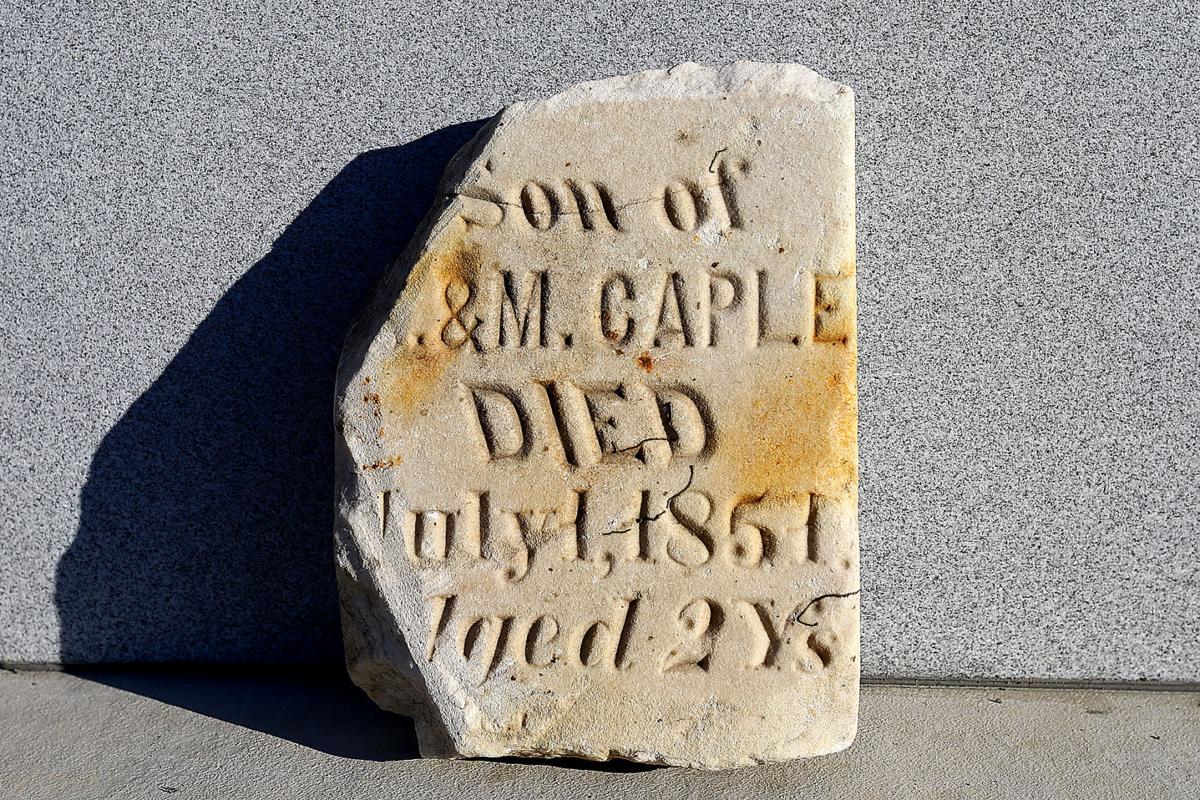 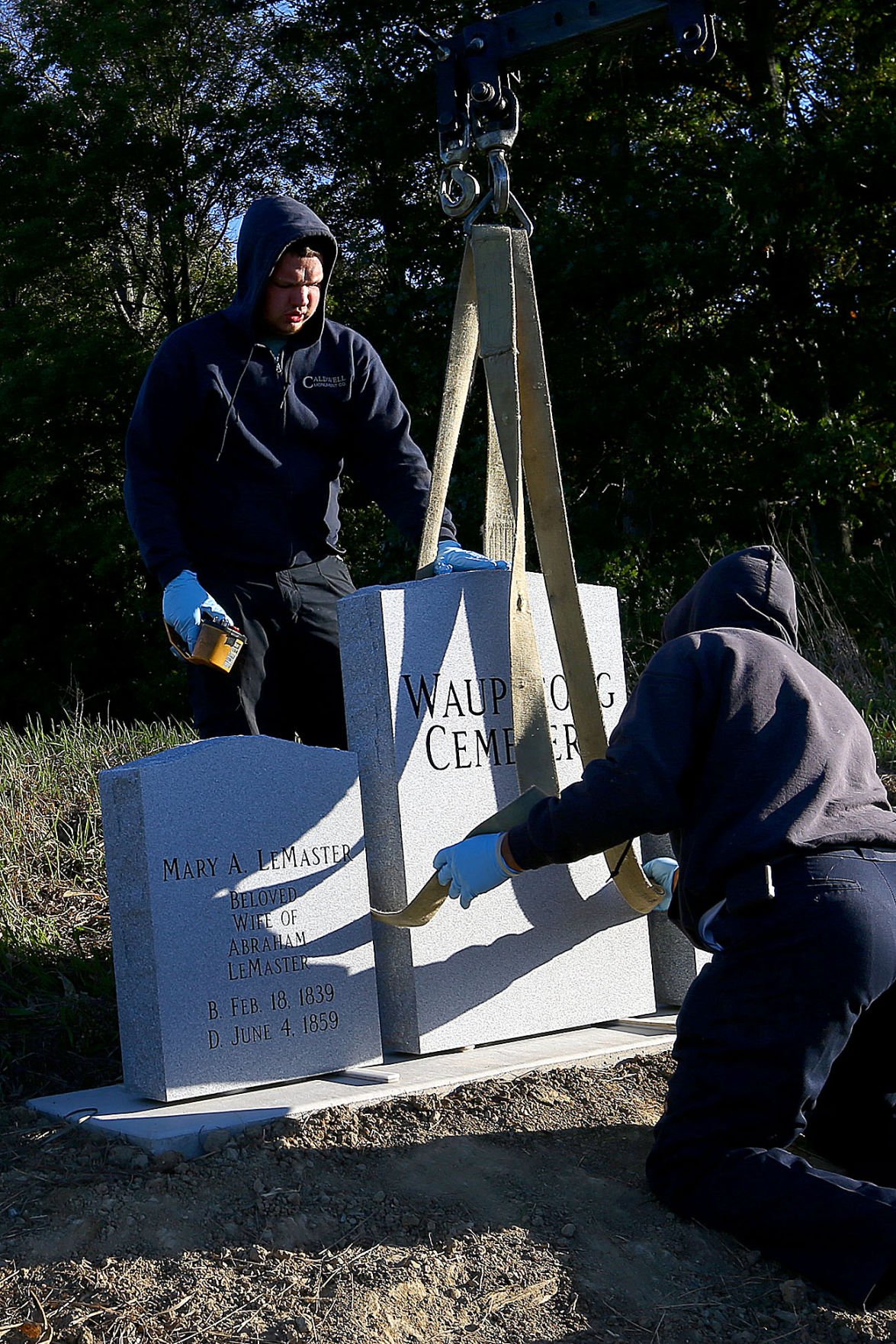 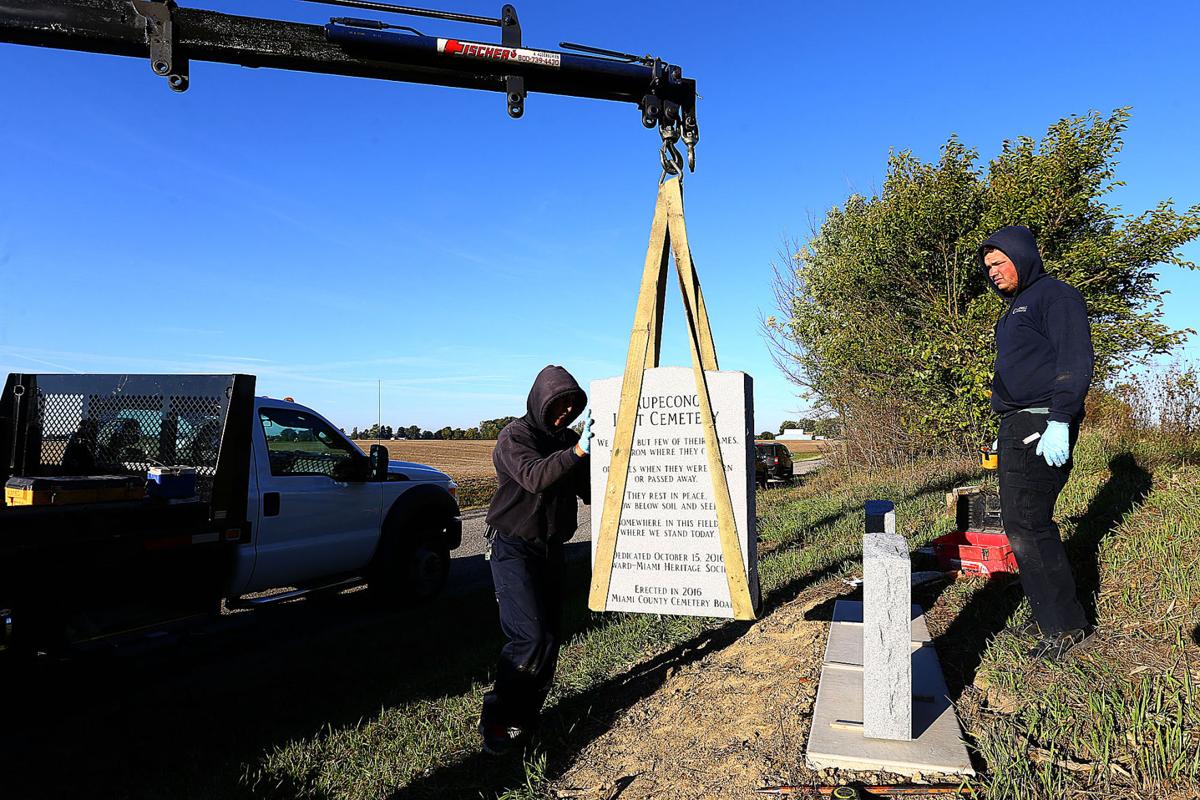 Gravesite markers are installed at Waupecong Cemetery on Oct. 10, 2016. Chris Brooks from Caldwell Monument Co. straightens the markers before they are secured. Tim Bath | Kokomo Tribune

WAUPECONG - There are around 140 cemeteries in Miami County. Some of them are still standing. Some of them aren’t. But they all have some kind of documentation showing when they existed and who is buried there.

It’s an unknown pioneer cemetery located about a half-mile southwest of the small, unincorporated town of Waupecong near the Howard-Miami county line.

Today, a corn field and swampy pond stand near where the cemetery was once located, but there’s no doubt a burial site once stood there, said Linda Hutchinson, chairperson of the Miami County Cemetery Board.

In the last 20 years, fragments of tombstones have been unearthed, revealing at least two early settlers were buried there in the 1850s.

But there isn’t one shred of documentation about who created it, or who is buried there.

“This cemetery is a mystery,” she added.

The burial site may be unknown, but it is no longer forgotten.

On Monday, a monument was erected along the north side of 1350 South to honor the unknown graveyard, which has now been dubbed Waupecong Cemetery.

New headstones have also been placed there to remember a 20-year-old woman and 2-year-old boy whose gravestones were discovered by farmers plowing the field.

The monument was put up as part of the Miami County Cemetery Board’s recent efforts to document and preserve every gravesite in the county.

There may not be any obituaries, death certificates, newspaper articles or other documentation that mention the cemetery, but that doesn’t mean local historians and cemetery board members haven’t been able to piece together a basic narrative of the burial site’s history and eventual destruction.

It was Jerry Jenkins, who spent time as a kid in Waupecong and eventually became its unofficial history, who first started digging into the cemetery’s mysterious past.

Jenkins organized a sesquicentennial celebration for the town in 1999, during which time he learned a local resident had discovered a gravestone out in a field southwest of town.

Jenkins said he learned from long-time residents in the area about the old pioneer cemetery, which they remembered seeing as kids in the 1930s and 1940s.

That piqued his interest, he said, and eventually led him to the county cemetery board to see what they knew about the lost graveyard.

Bit by bit, Jenkins and board members pieced together some facts.

Hutchinson said they discovered county atlases from 1866 and 1877 had a cross marking where the burial site had been located, but the maps didn’t give the site a name.

After extensive interviews with lifelong residents who remember seeing the cemetery as kids, they were able to determine there had likely been around 35 tombstones. In fact, just this week, a man in his 80s showed them a spot in a small wooded area where he remembered seeing some tombstones in the 1950s.

But maybe the biggest discovery was how the cemetery was destroyed. According to anecdotal accounts from long-time residents of the area, a farmer had bulldozed most the headstones into a nearby swamp sometime in 1947 or 1948 and plowed the cemetery up for farmland, Hutchinson said.

Those first-hand accounts were proven true earlier this year when Hutchinson and Shirley Griffin, who volunteers as an archivist at the Miami County Museum and works with the cemetery board, decided to investigate the small, swampy pond located nearby.

Griffin said they were walking around the area when she stepped on something hard. She and Hutchinson began pulling away debris and matted grass to see what was underneath. Eventually, they pulled up a tombstone fragment engraved with the initials M.V.

“That’s been a mystery trying to figure out who that was, but we know it had to have been associated with that cemetery,” Griffin said.

The fragment was the third gravestone discovered buried near the cemetery. Two other tombstones had been plowed up by farmers over the years.

Research revealed one tombstone belonged to a woman named Mary A. LeMaster, who was born in 1839 and died in 1859.

The other headstone belonged to Lemuel Cople, who was the son of the postmaster at the time, Griffin said. He was born in 1851 and died when he was two years old.

But the physical evidence proving the cemetery’s existence ends at the tombstones and markings on the old county maps. The rest has all been anecdotal accounts, Griffin said.

Even with the scant details about the burial site, the fact there was indeed a cemetery near Waupecong demands some kind of memorial, Griffin said.

“Whether or not we have stones, the people buried there still need to be remembered and recognized,” she said. “It means a lot to the people of this community.”

Griffin said that need for recognition was fulfilled Monday with the erection of the monument, but the investigation into who exactly was buried in the cemetery won’t stop.

“It’s history and a mystery that needs to be solved,” she said. “It’s an ongoing saga.”

Anyone who wants to learn more about the cemetery can attend a free event called A Day of Dedication for Waupecong’s Lost Cemetery. The event runs from 9 a.m. to 2 p.m. Saturday at the Howard-Miami Mennonite Church, 3976 E. 1400 South, Kokomo, and has been named an Indiana Bicentennial Legacy Event.

1. A decades-long ban on Pinball machines in Kokomo is overturned