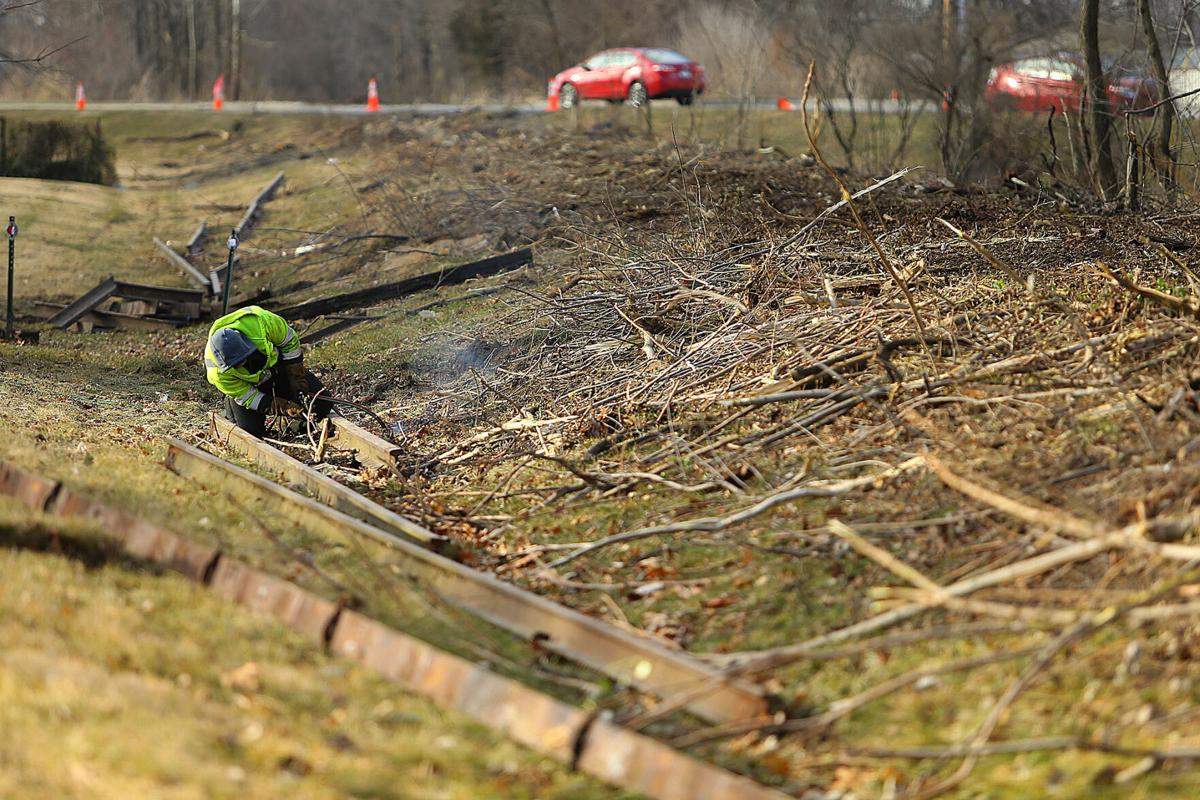 Kokomo Street Department workers remove the railroad tracks from the area between Dixon Road and Markland Avenue, where the walking trails will extend toward Russiaville, on Jan. 22, 2021. Landon Matlock uses an acetylene torch to cut the old rails into manageable pieces for transport to the recycler. 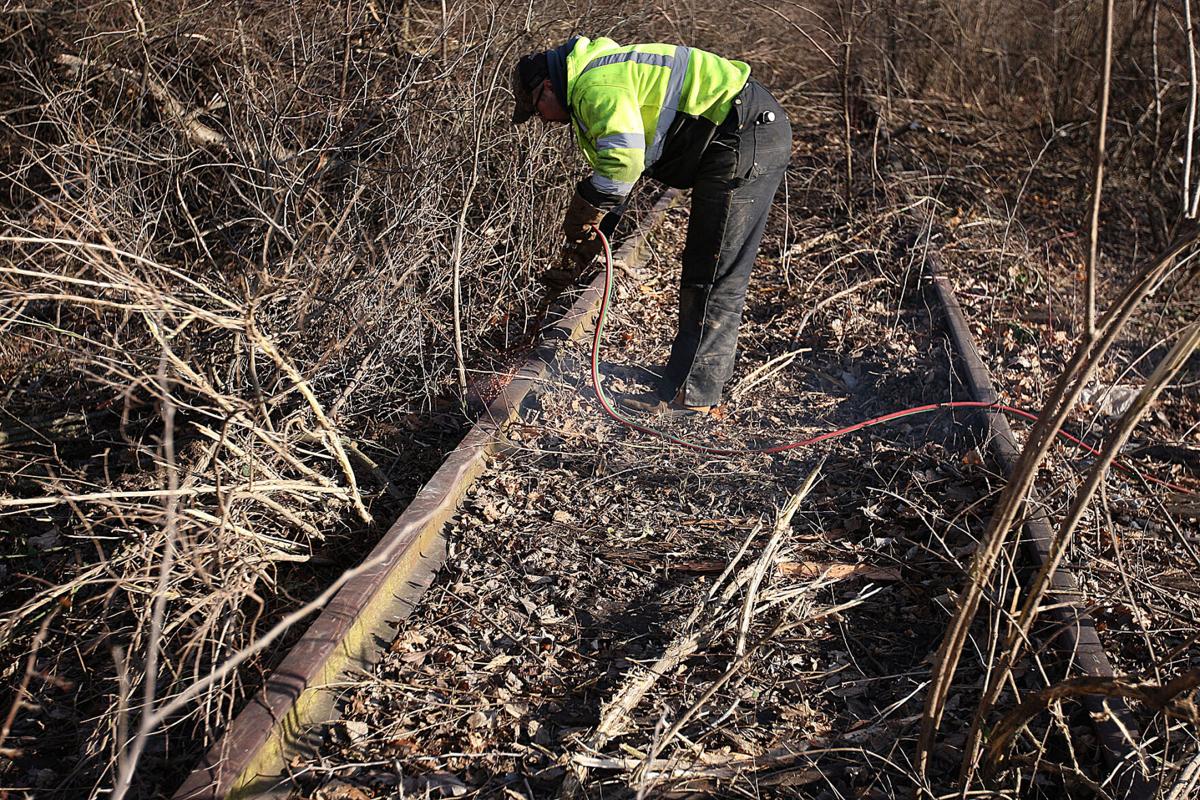 Landon Matlock of the Kokomo Street Department uses an acetylene torch to cut bolts that hold the rails together. Tim Bath | Kokomo Tribune 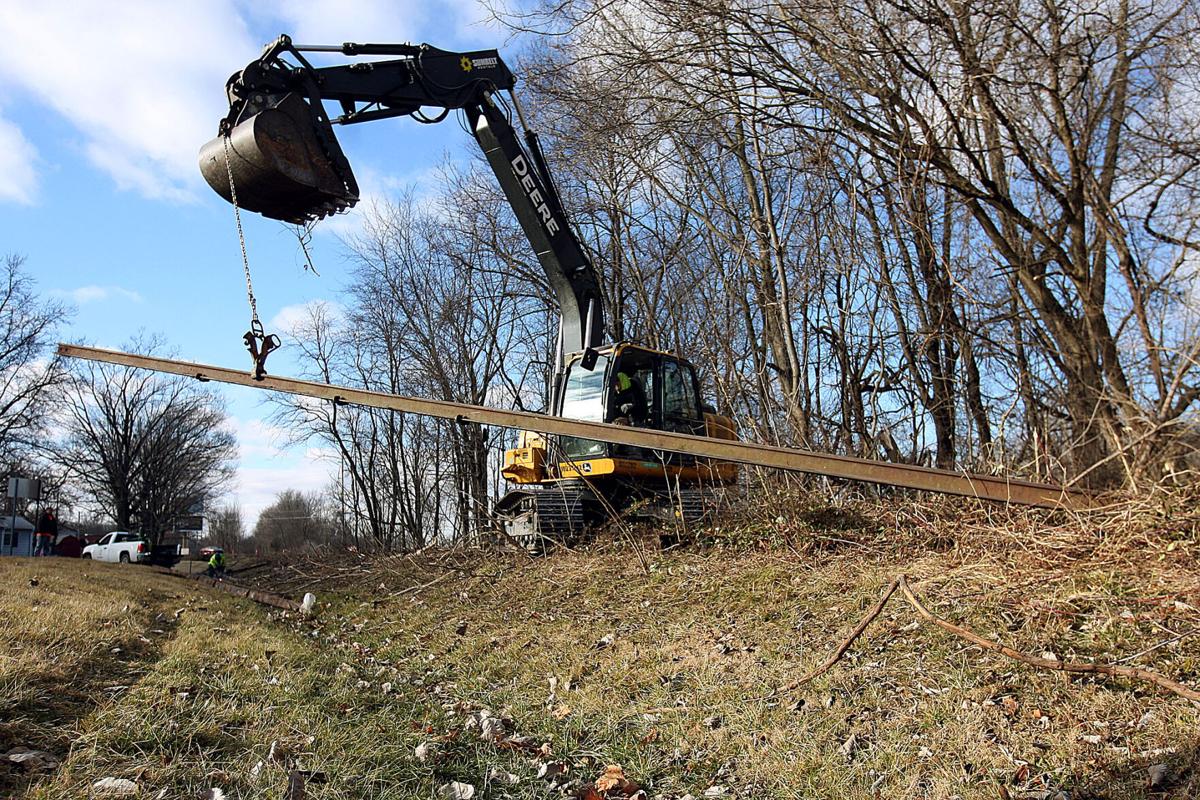 Dave Stout of the Kokomo Street Department lifts the rail pieces from the old bed. 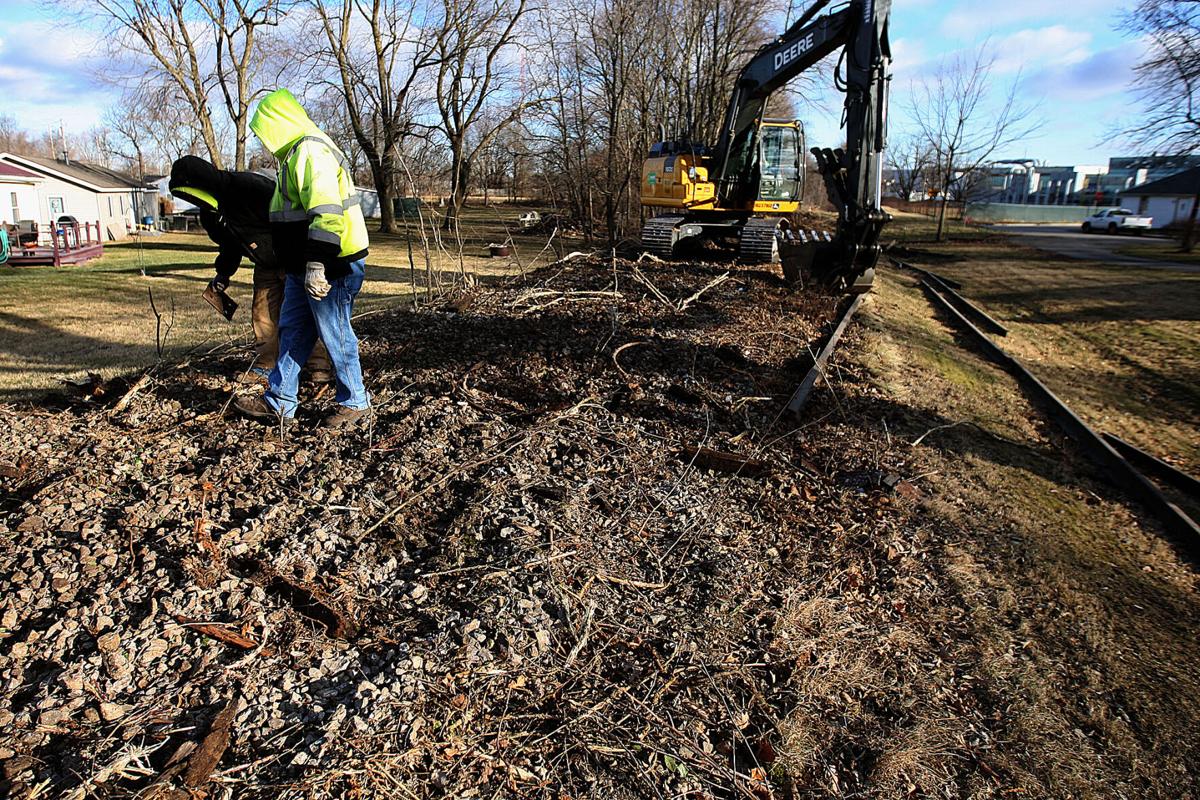 Dave Stout and Marc Mishler of the Kokomo Street Department pick up plates and spikes from the old tracks.

Kokomo Street Department workers remove the railroad tracks from the area between Dixon Road and Markland Avenue, where the walking trails will extend toward Russiaville, on Jan. 22, 2021. Landon Matlock uses an acetylene torch to cut the old rails into manageable pieces for transport to the recycler.

Dave Stout and Marc Mishler of the Kokomo Street Department pick up plates and spikes from the old tracks.

Preliminary work is underway to extend the Cloverleaf Trail past Markland Avenue to Dixon Road, marking the next major expansion of the pathway that officials hope will eventually connect to Frankfort.

City Engineer Carey Stranahan said the scope of the current project is to extend the trail where it ends at Markland Avenue, beside the Howard County Sheriff’s Department, to the west side of Dixon Road.

The rail-trail will follow the former Norfolk Southern line, which the city acquired in 2018. The line runs by Haynes International and the city’s yard waste recycling center before hitting Dixon Road.

Stranahan said the project includes rehabbing the old rail bridge over the Wildcat Creek just south of Markland Avenue to turn it into a pedestrian- friendly walkway.

The project will also construct a short trail spur just south of Markland Avenue to connect to the Wildcat Creek Soccer Complex. Stranahan said the city this year plans to build a walking trail around the complex, and the rail-trail spur will connect to that pathway.

Mayor Tyler Moore said the project around the soccer complex fits well with the new trail extension to make the area a travel destination for bikers and hikers.

“We want to continue to make that area a destination point for folks that are driving or using the trail,” he said.

Moore said he hopes the trail extension will be finished sometime in the next year or so, but the timeline depends on the weather, as well as complications created by the pandemic.

“If mother nature continues to give us a mild winter, then the time we’re not spending plowing snow, we can dedicate some guys to continue to clear out that phase of the trail,” he said.

Streets crews will do all the clearing for the extension, and construction of the trail will be bid out sometime this summer, Stranhan said.

Moore said once the new expansion is complete, the long-term goal is to continue building the trail following the rail line through Howard County to Russiaville, and then through Clinton County to Frankfort.

However, the city has only acquired the railroad to Defenbaugh Street. Past that, it’s still owned by Norfolk Southern.

Moore said the city is currently in talks with officials from Howard and Clinton counties about acquiring that property from the railroad company, but no offers have been set in stone.

“That’s the overall plan, but we’re still in discussions with the railroad in regards to possibly acquiring that,” he said. “Unfortunately, like everything else, we’ve been at the mercy of COVID.”

Stranahan said it’s likely Norfolk Southern will only sell the rail line if the entire corridor running to Frankfort is purchased all together. Within city limits, the company still owns the line from west of Defenbaugh Street to Malfalfa Road.

“Norfolk Southern isn’t going to sell us a mile and half of railroad, Stranahan said. “They aren’t going to do that. If they sell us anything, they’ll sell the whole corridor. More than likely, it would be a group of entities that would acquire the entire corridor, and then we can figure out the construction.”

The Cloverleaf Trail was added to the city’s trail system in the summer of 2018. The southern trailhead was first constructed at Mehlig Park as a branching off of the Wildcat Creek Walk of Excellence, running northeast.

The trail was expanded southwest to Markland Avenue last year.