As Tribune crime reporter Mike Fletcher wrote June 25, medical professionals formerly of the Wagoner Medical Center now are being sentenced for their roles in operating one of the largest pill mills the area has yet seen.

And while the cases against Marilyn Wagoner, Michelle Wagoner, William Terpstra, Robert Brewer and John Thomas still are pending, nurse Linda Richards and two physicians’ assistants — Gary Hartman and Thomas Hewitt — have been sentenced to varying degrees of in-home detention and probation.

“Dr. Wagoner, the head of the clinics, was the first to plead guilty in the case and has been the only one sentenced to prison time,” Fletcher reported. “He pleaded guilty to eight counts of dealing in a narcotic drug. He was sentenced in July [2014] to two years in prison, eight years of in-home detention and 20 years of probation. With a day-for-a-day credit for time served, Wagoner was released from prison March 21, the Indiana Department of Correction website states. He is currently on in-home detention.” 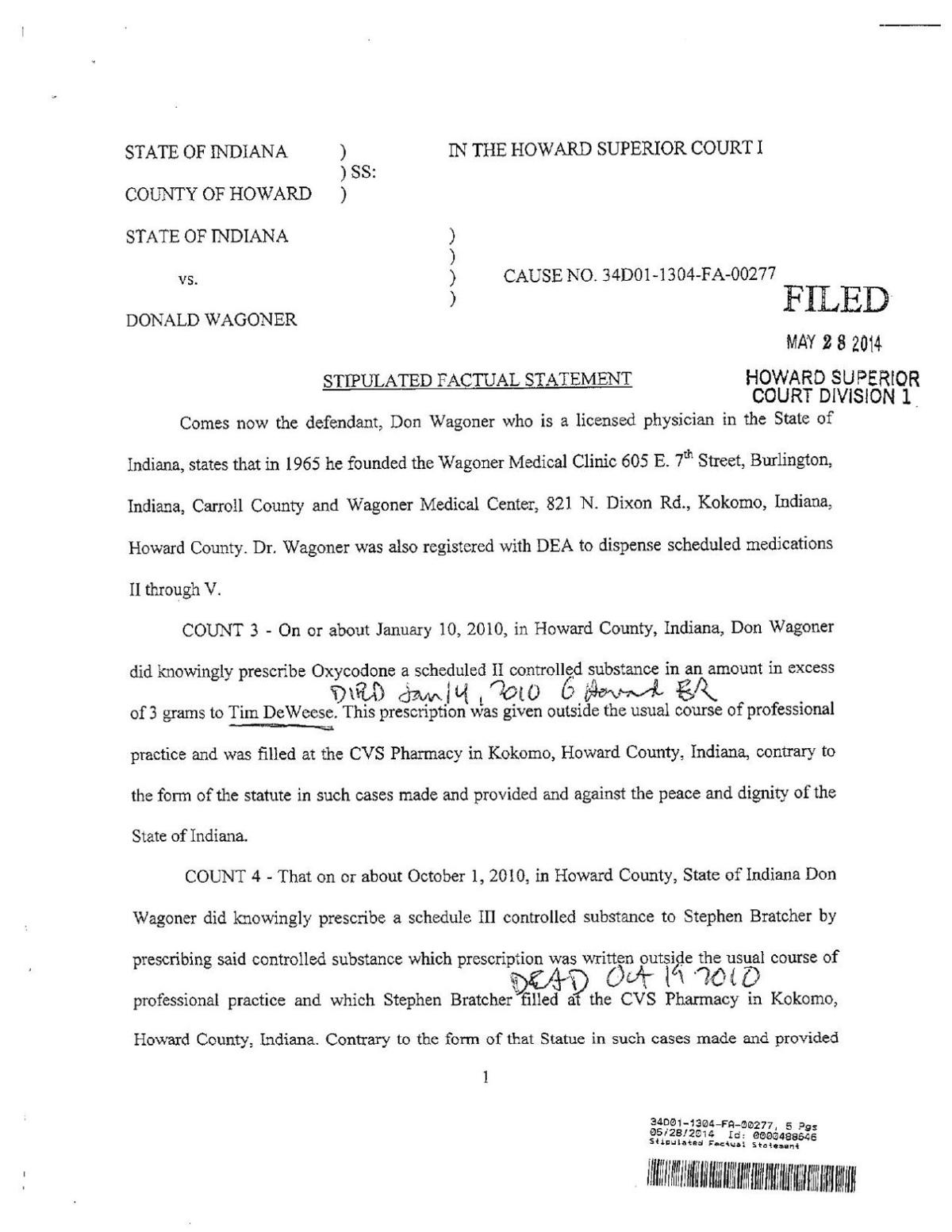 Accompanying this editorial, we have posted Dr. Wagoner’s sentencing order, recommendation of plea agreement and stipulated factual statement. Take some time, read it closely and see if you think this sentence fits the crimes. (And what sentence do you suppose would be handed down for someone moving this amount of the same illicit drugs on the street?) This documentation contains not only a list of Wagoner’s misdeeds, but also an accounting of the patients who are no longer alive due to his malfeasance.

We’re all suffering for his crimes, and will be for some time. When doctors like Wagoner pump up the levels of opiate addiction, the need they create does not leave with them. It remains.

“County Coroner Jay Price has seen at least 11 drug overdose-related deaths already in 2015, and is waiting on toxicology results for up to six more cases,” wrote Tribune reporter Josh Sigler in his May 10 story on local overdose deaths. “The county had a total of 18 overdose deaths in 2014. Since taking over in 2008, the most overdose-related fatalities Price has seen in one calendar year was 23 in 2010. If the 2015 trend continues, it'll be one of the worst years in county history for overdoses.”

Long after Wagoner himself has passed away, the legacy of his destruction will live on in this community.

The trial of Dr. Marilyn Wagoner, scheduled to begin last Friday in Howard County Superior Court I, has been postponed to an undetermined date.

Another jury trial involving a former Wagoner Medical Clinic employee has been postponed to an undetermined date.

Two jury trials involving a former employee and a doctor of the Wagoner Medical Clinic are now scheduled for October, a timeline that will ine…