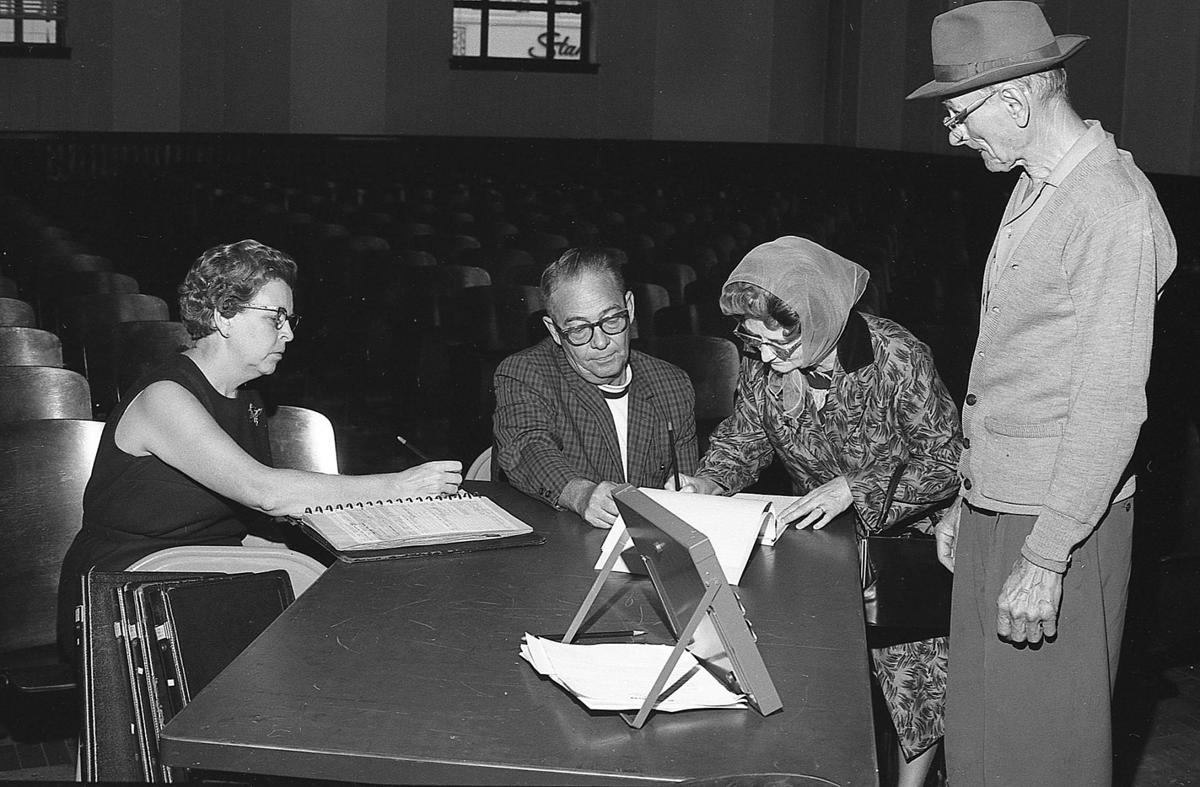 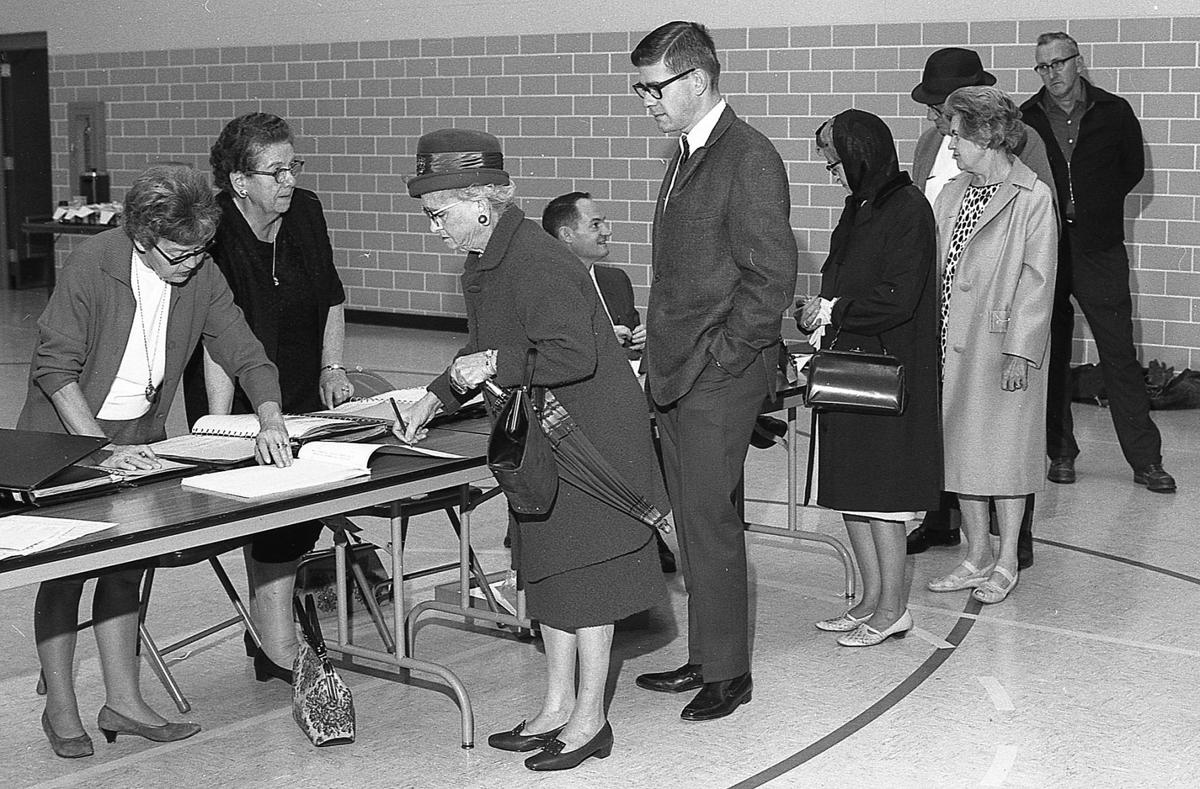 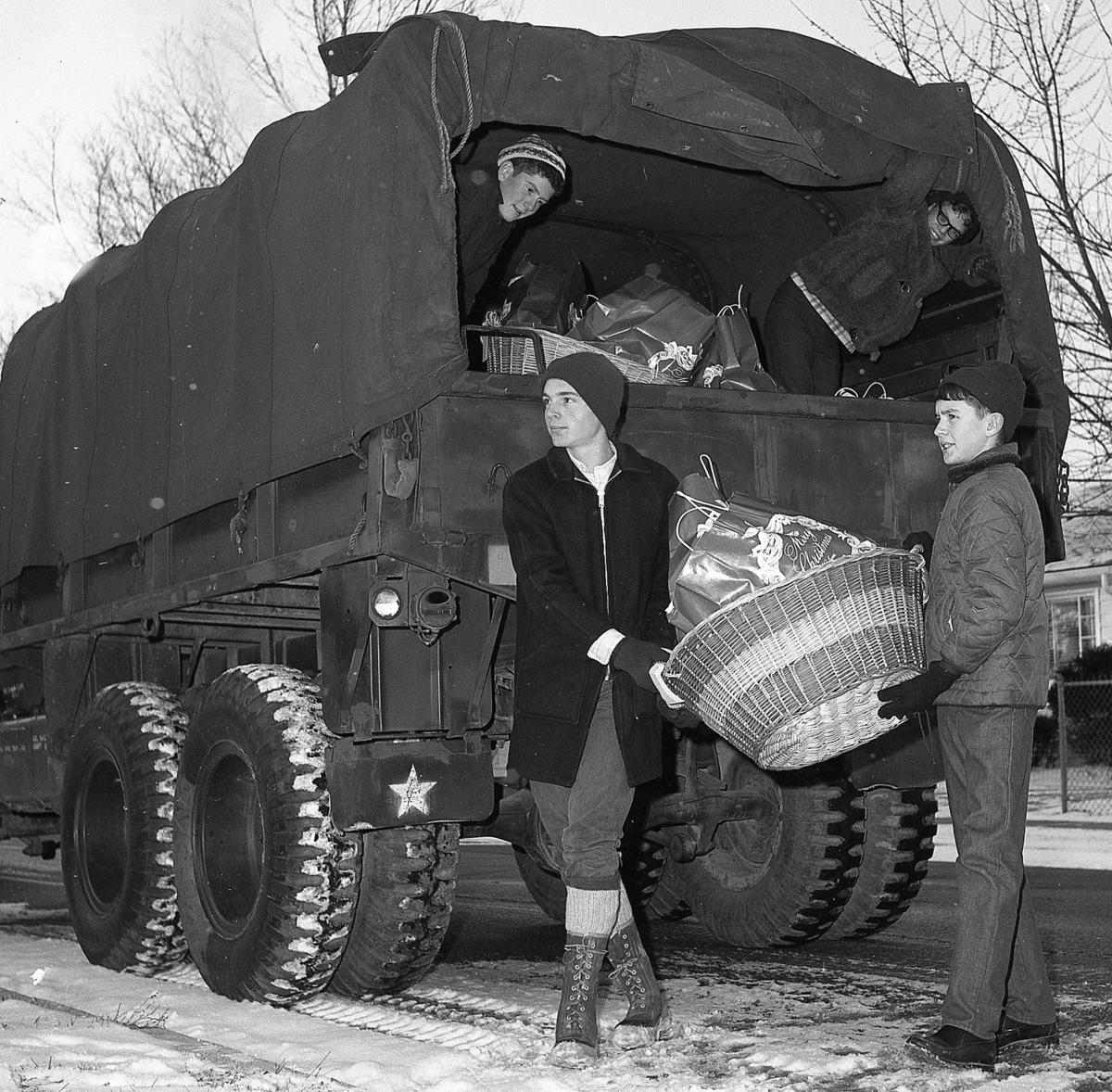 Dec 24, 1968 Goodfellows Christmas Eve and the Good Fellows arrive with a basket full of the things that make Christmas. Four Boy Scouts carry the clothing, treats, gifts and toys to the door of a needy family. The distribution early Tuesday morning capped weeks of preparation by the Good Fellows volunteers. Area residents set a record for donations to the drive. On the ground are Roger Powers, left, of scout troop 318 and Tom Powers of troop 316. Aboard the truck are Fred Watkins, left, troop 337, and Martin Hellman, troop 337. (Tribune Photo)

Dec 24, 1968 Goodfellows Christmas Eve and the Good Fellows arrive with a basket full of the things that make Christmas. Four Boy Scouts carry the clothing, treats, gifts and toys to the door of a needy family. The distribution early Tuesday morning capped weeks of preparation by the Good Fellows volunteers. Area residents set a record for donations to the drive. On the ground are Roger Powers, left, of scout troop 318 and Tom Powers of troop 316. Aboard the truck are Fred Watkins, left, troop 337, and Martin Hellman, troop 337. (Tribune Photo)

Editor's note: This is the final quarterly installment in a series on the 50th anniversary of 1968 and what was happening at home and abroad. For a look at past installments, visit kokomotribune.com.

Summer Olympics in October. Richard Nixon in November. And Apollo 8 bringing man even closer to its first steps on the moon in December.

Those were the big events highlighting the final quarter of the tumultuous year of 1968 around the globe and beyond as Mexico City hosted a politically charged Olympics in the fall rather than summer due in large part to the rainy summer climate, Richard Nixon defeated Hubert Humphrey to become the 37th U.S. President, and Apollo 8 went down as the first manned voyage around the moon.

Following are some of the events that took place in Kokomo and nearby areas from October to December of 1968 as the country closed the door on 1968 and prepared for what would be an equally wild ride in 1969 with Woodstock, the Manson murders, and those actual first steps on the moon all on the horizon.

Republican candidate for Indiana Governor Edgar D. Whitcomb visits with around 300 city residents at the Highland Park Shelter House. During the day, he makes stops at various Kokomo factory gates to chat with employees leaving work.

Family members of the late Virgil Gus Grissom gather at Bunker Hill’s Grissom Air Force Base as a museum honoring the astronaut is dedicated during a ceremony. Among those present for the ceremony are Grissom’s parent and his brother Norman. The main speaker is Dr. Paul Gardner, counseling and career guidance officer in the education program at NASA.

An apparent missing photo along with several chunks of white space where text had been removed from stories greeted readers on the Kokomo Tribune’s front page. An accompanying editorial explained that the front page as well as the editorial page of the paper were censored according to standards practiced in many repressed nations in the world in the hopes of giving readers and employees alike a better appreciation of freedom of the press.

Reaction varies over the next few days to the experiment with “blank-space” censorship, ranging from people claiming it to be a clever and thoughtful idea to blaming the printing press and proofreaders for the errors that led to a goof by the Tribune.

A newborn baby is found abandoned but alive beneath the bathroom floor of an eastside Kokomo house. The owner of the house pried up loose boards to find the child after her daughter heard the baby crying.

The owner leads police to her sister-in-law, who she believes is responsible for abandoning the baby.

When questioned, the woman denies giving birth to the child despite submitting to an examination by a doctor that confirmed she had recently given birth.

The following day, the Tribune reported that the baby had died.

The locally-produced materials are used in various components in the giant Saturn V rocket which have to withstand extreme temperature and other stresses inherent in space flight.

As Richard Nixon tops the headlines with his election as the 37th president of the United States, Howard County Republicans have further cause for celebration as they capture all seven county offices.

The only Democrat to carry the county was U.S. Sen. Birch Bayh.

Four people are injured when a northbound Penn-Central passenger train derails in Hemlock. The engine and two derailed cars did not turn over, but were tilted. Passengers are taken by taxi to Logansport to board another train for the rest of their trip.

The engine left the tracks at a switch that had been deliberately opened and ripped along the rails for around 100 yards before coming to a stop. Two days later, FBI agents and railroad detectives determine that two 10-year-olds were responsible for the wreck. The boys were not believed to have intentionally derailed the train, saying the switch was unlocked and they neither broke it nor damaged the light.

Just the fourth time in three decades that Kokomo had experienced such an occurrence, various descriptions of the phenomenon are reported, ranging in length from 5 to 20 seconds and including buildings shaking and houses creaking as the Kokomo Police Department fields hundreds of calls.

Two out of five inmates who fled the Howard County jail are still unaccounted for as a statewide search continued.

The five men escaped a day earlier when they overpowered a turnkey and trusty who were picking up breakfast trays in the morning. Two of the escapees were able to rush into the jail office and grab the jailer, obtain the keys, and order another employee into the jail kitchen. They locked a total of four employees into a cell before fleeing the jail.

According to the jail, the escapees were able to jam their cell doors with a foreign substance when breakfast was served earlier that day, preventing the doors from locking and leading to the jailbreak.

A rash of several burglaries continues as merchandise valued at several thousand dollars is taken from a downtown jewelry store in one of three burglaries reported to Kokomo police over the weekend.

Expensive watches and rings were among the items that were stolen in the break-in, which appeared to be the work of professional safe crackers, according to the police.

By the time the final tallies were released on Dec. 28, the organization collected $12,936.06 in its annual gift-giving campaign. That figure surpassed the previous record of $11,047.89 collected in 1965. The organization attributes its successful campaign not only to the monetary donations but also to the individuals and groups that gave their time and effort to the cause.

Kokomo couple Mr. and Mrs. Harold Coate followed the Apollo 8 mission with special interest. The couple’s son, 35-year old Allen Wayne Coate, is a member of the engineering team that designed the pressurization system for the space vehicle that carried three astronauts on the historic lunar orbit mission.

Coate, a Northwestern High School grad, was employed with the National Aeronauticsand Space Administration at the time.

As 1968 comes to a close, Kokomo mayor John W. Miller looks ahead to 1969 as a year he plans on pushing forward with a landfill method of disposing of the city’s garbage and trash as a major priority. The mayor also lists a new city building, a housing center for elderly citizens, and continued close cooperation between the city and Howard County governm

See page A7 for a look at what was happening nationally and globally in 1968.