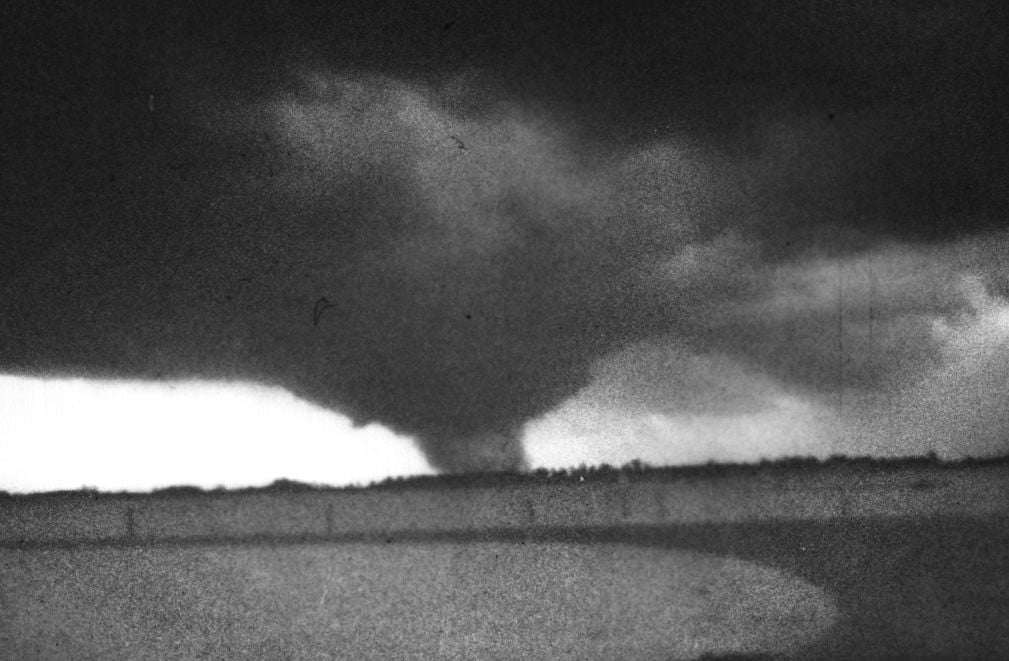 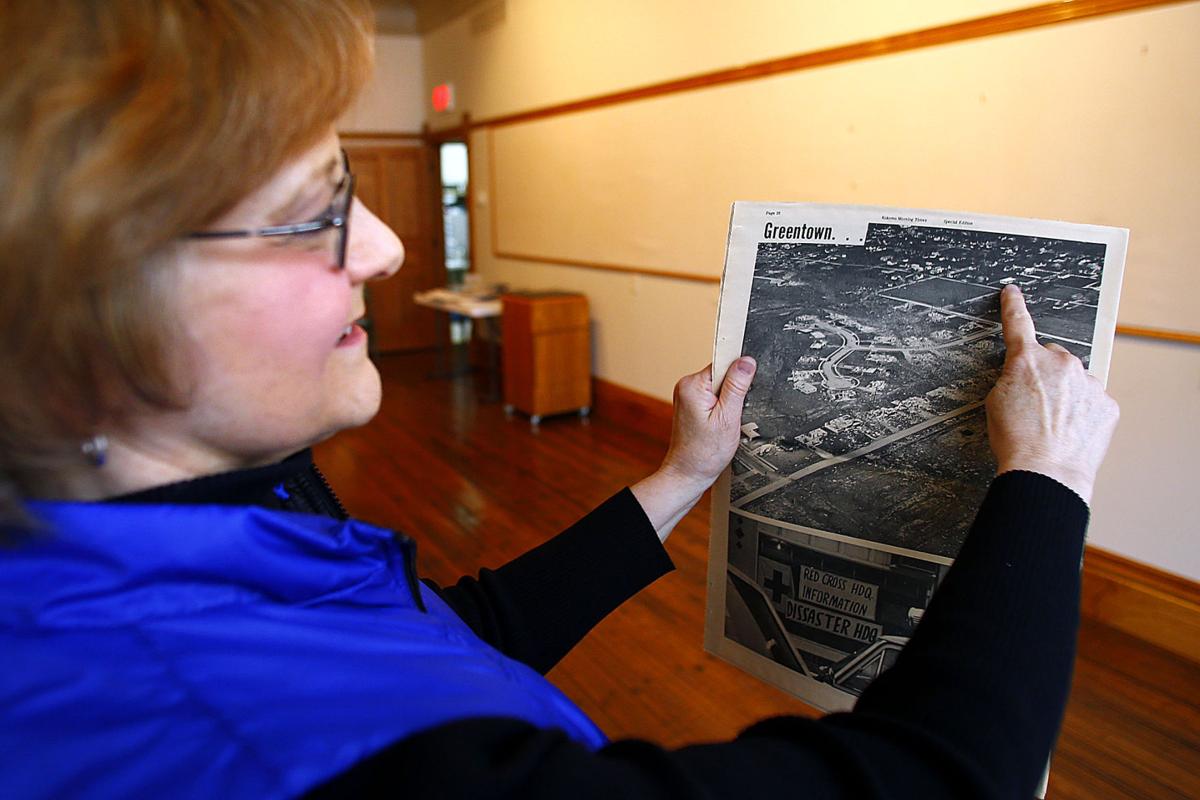 Greentown resident Paula Shrock's house wasn't hit directly by the Palm Sunday tornado, but she was traumatized by the "life-altering event." She's seen here on March 23, 2015. 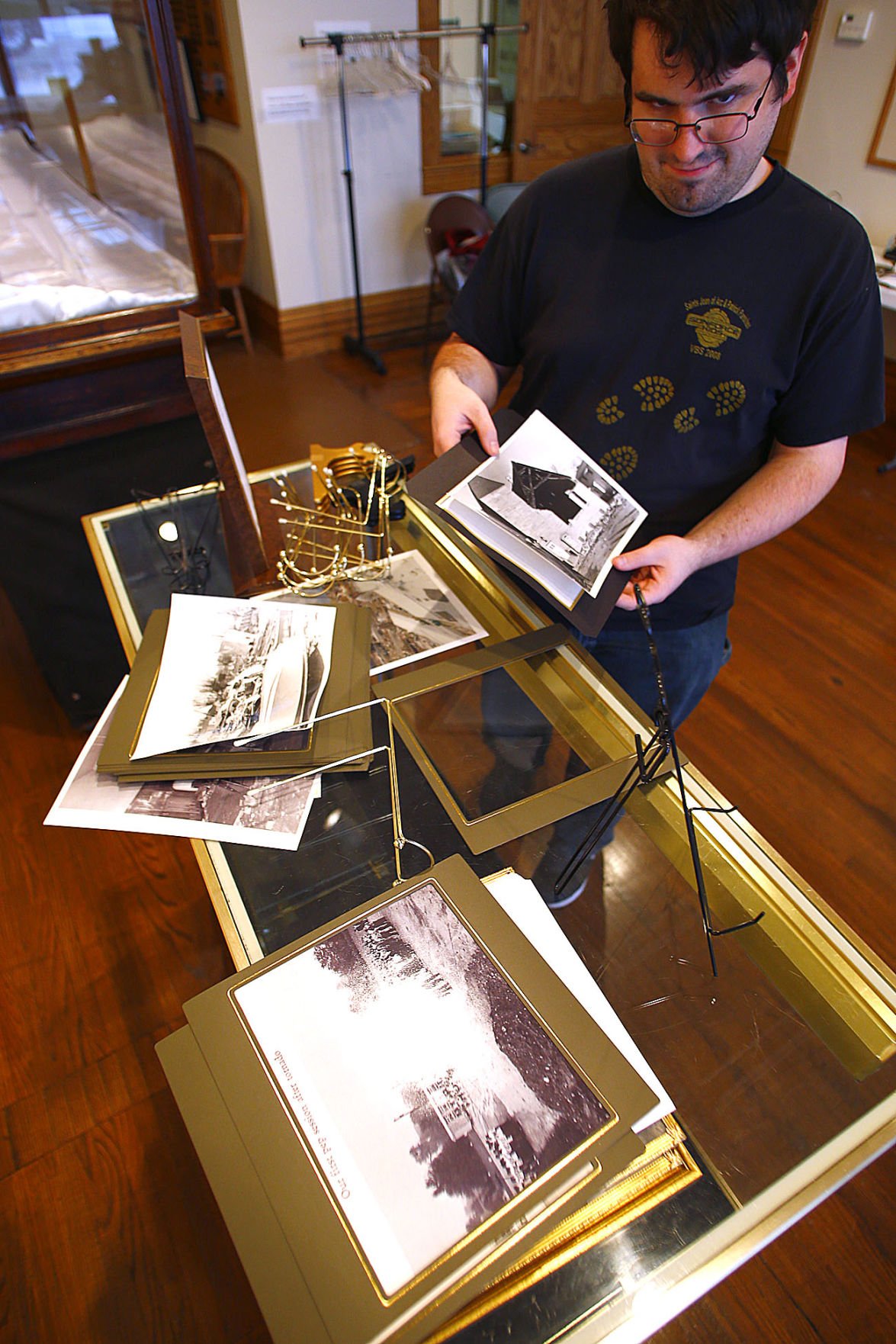 Branden White sorts photos on March 23, 2015, for a display at the Greentown Historical Society marking the 50th anniversary of the Palm Sunday tornado outbreak. 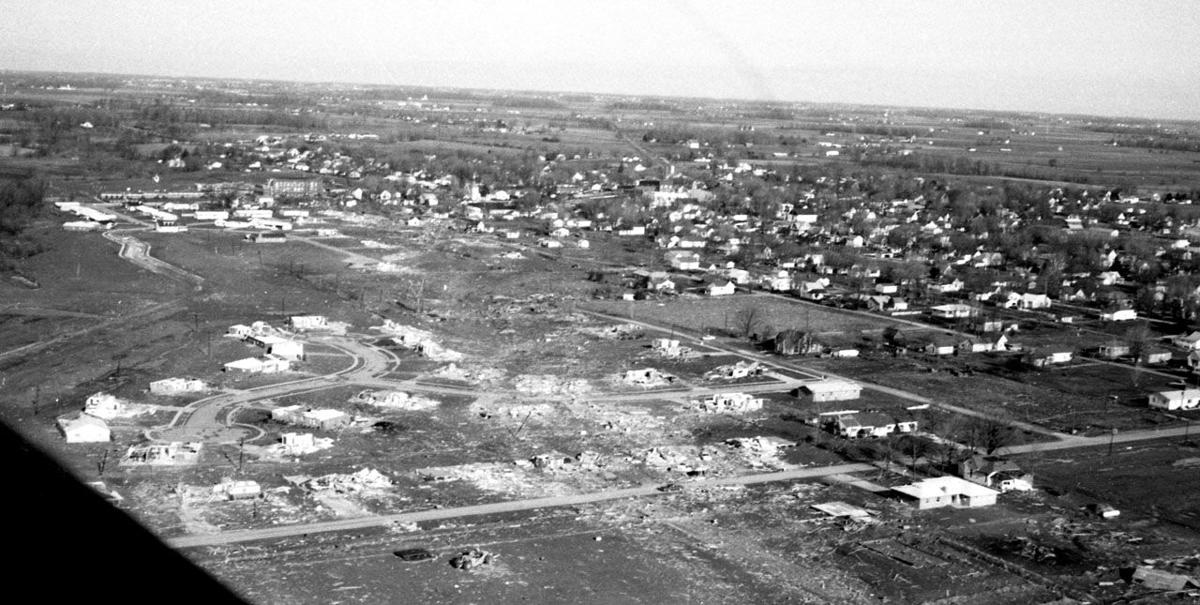 Greentown resident Paula Shrock's house wasn't hit directly by the Palm Sunday tornado, but she was traumatized by the "life-altering event." She's seen here on March 23, 2015.

Branden White sorts photos on March 23, 2015, for a display at the Greentown Historical Society marking the 50th anniversary of the Palm Sunday tornado outbreak.

Despite being just 12 when the Palm Sunday tornado struck her neighborhood in Greentown, Paula Shrock has no problem recalling the sounds of that fateful day.

The sound of bricks from nearby buildings flying through the air, the roaring of the wind, the sound of large objects like cars and refrigerators landing near her house, and most of all, the sound of the aftermath.

"As soon as the crashing and the landing of all that junk happened, there was silence for about 5-10 seconds and then the next sound I heard was the sound of people wailing."

"As soon as the crashing and the landing of all that junk happened, there was silence for about 5-10 seconds and then the next sound I heard was the sound of people wailing, like you see on TV in the war scenes," she said. "That was the kind of wailing I heard. It made an impression on me. That wailing continued for some time.

"I guess I remember the auditory clues as much as anything and I remember shaking, because I was in shock," she said.

The sounds stick with her to this day. But for more than 30 years, the day affected Shrock subconsciously as a "life-altering event."

This April 11, 1965 file photo shows an aerial view of damage to Greentown.

"I had nightmares for years afterwards," she said. "I was probably well into my 40s before I finally told someone I was having nightmares. It wasn't a therapist or anything like that. But once I started telling people I was having these nightmares, they went away. It kind of had me under its influence for years into my adulthood, even though I can't say it impacted decisions I made or even made me more afraid of storms."

Shrock can recall the details leading up to the tornado striking from the west, looking out the west window of her home just a few blocks to where the old Eastern High School building was and where the current Eastern Elementary School is located.

Shrock was in the home with her parents, Pauline and Howard, as they formulated a plan to go underneath the bed after opening the windows in the house. Her sister, Ellen, was living nearby in Kokomo, while her younger sister, Linda, was spending the afternoon with her boyfriend.

"I remember it getting really gray, almost gray-green," she said. "I don't know whether the hail came first, but we had a good sized hail storm. Then there was the quiet afterward. We were watching out the windows, because we didn't have any of the alert systems you have now.

This file image shows one of the tornadoes spawned in the April 11, 1965 tornado outbreak.

"I looked out the window, and pretty soon we saw it. It was huge."

"I looked out the window and pretty soon we saw it," she added. "It was huge."

The tornado was heading straight for her home, Shrock said. She began to see bricks from nearby homes flying through the air, but the twister didn't hit the home directly, instead leveling homes as it veered to the south just two blocks west of the home.

Four people within two blocks of the Shrocks' home died, and many more suffered injuries. The property escaped with only a couple of broken windows and a two-by-four lodged into the siding of the home.

A refrigerator from the home of a neighbor had landed in their yard, along with thousands of shards of glass.

"It turns out two of the houses across from the school were avid Greentown glass collectors," she said. "We had broken Greentown glass all over our yard. I couldn't go barefoot in the area for a few years."

The area where the tornado hit was sealed off in the week that followed, making it difficult for Shrock's sisters to find family members to see if they were OK. The family moved to Bluffton to stay with family for a week following the storm,. They returned to devastation and funerals that hit the community hard.

"I remember the funerals in the time after, it was very hard on the town," she said. "To have that many funerals in one town, you would have been hard pressed to find someone who didn't know any of those people."

While the Palm Sunday anniversary often comes and goes without Shrock giving the storm a second thought, the memories are nearly impossible to shake, she said, and will likely stay with her the rest of her life.

"At the time I was 12, I was just a child," she said. "I didn't know it would be such a life-altering event. You realize the impact it's had through the years."

Martin Slagter can be reached at 765-454-8570, martin.slagter@kokomotribune.com or on Twitter @slagterm.