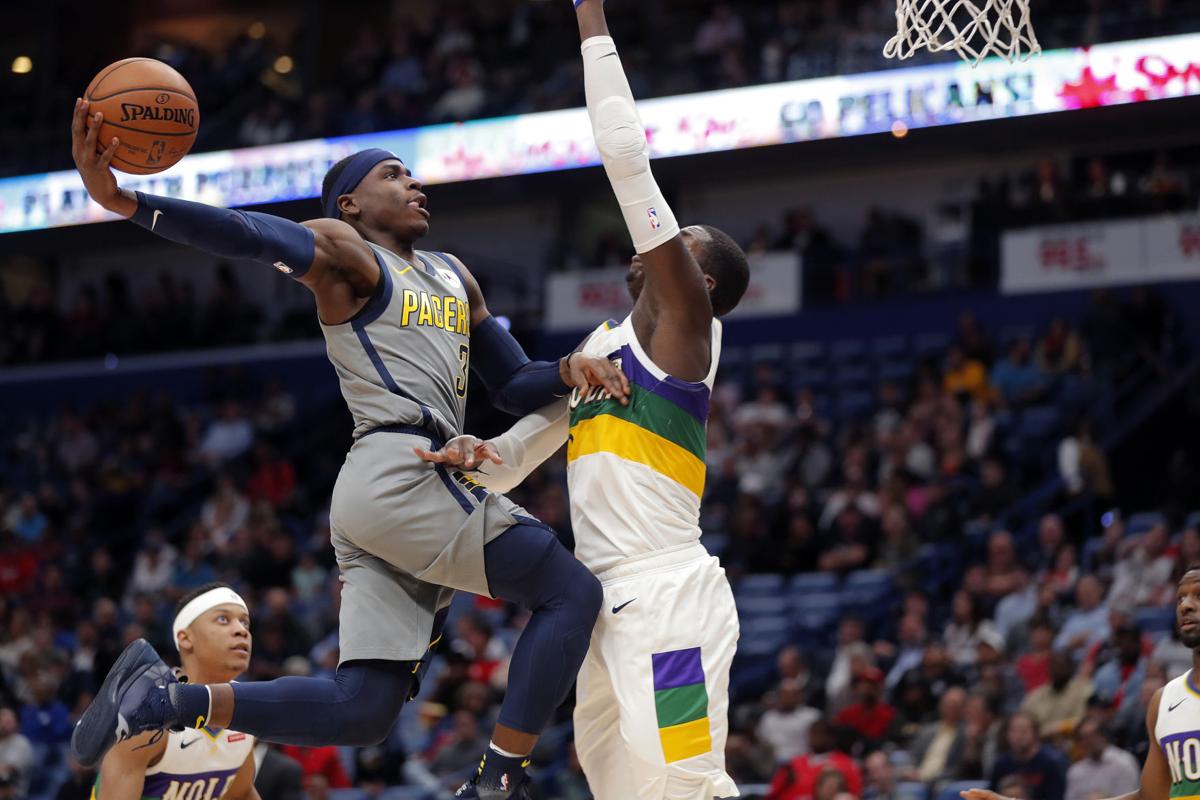 ATTACKING: Indiana guard Aaron Holiday goes to the basket against New Orleans forward Cheick Diallo during the first half of the Pacers' 109-107 win Monday night in New Orleans. The Pacers are giving Holiday more playing time with Victor Oladipo out.

ATTACKING: Indiana guard Aaron Holiday goes to the basket against New Orleans forward Cheick Diallo during the first half of the Pacers' 109-107 win Monday night in New Orleans. The Pacers are giving Holiday more playing time with Victor Oladipo out.

The arrival of the NBA trade deadline is rapidly approaching and it’s important that the Indiana Pacers make the most of it. There have not been many reports regarding what they may be interested in doing at the deadline, but that is not uncommon.

Before Victor Oladipo suffered a season-ending injury, there were reports that the Pacers were interested in trading for Memphis Grizzlies guard Mike Conley. The talks stopped after the injury because they felt that it no longer made sense to make a move for a 31-year-old who is owed $67 million over the next two seasons.

The final report that has involved the Pacers is that they are "quietly active" in seeking a wing with size, according to Yahoo Sports’ Keith Smith. He mentioned that backup post Kyle O’Quinn could be used in a trade to facilitate an acquisition of that kind because he has been out of the team’s rotation.

To be clear, Indiana likely will be looking for a role player for wing depth and not a player like Otto Porter Jr. from the Washington Wizards. There are players out there who could likely be acquired for good value who aren’t playing key roles for their teams. Someone like former Pacer Glenn Robinson III from the Detroit Pistons makes sense consider he already has familiarity with the team.

There has not been much noise regarding who the Pacers are interested in re-signing this summer aside from ESPN’s Zach Lowe reporting that they have interest in bringing back Bojan Bogdanovic. It is unlikely that both Darren Collison and Cory Joseph are brought back — the Pacers need to make room for Aaron Holiday in the regular rotation.

While it may not be a philosophy that they will likely use at the deadline, it appears that the Pacers should either look to be sellers for assets, or reduce the amount of needs that they will have this summer by looking to acquire younger supporting cast talents. Their current record almost guarantees a playoff spot so they basically have a free "punting" opportunity.

The rest of the Pacers’ starting unit aside from Oladipo and Myles Turner will be free agents this summer and it does not make sense to simply re-sign them all. Their success this season has been built on playing elite defense but they will need to improve on the offensive end of the floor before being a legitimate contender.

They currently have the league’s second best defensive rating behind only the Eastern Conference-leading Milwaukee Bucks while being tied for the league’s 18th ranked offensive rating. They need to take shot attempts with higher value as they rank fifth in field goal percentage but just 15th in points per possession and while it certainly isn’t the only factor, the best way to do that is by increasing perimeter shooting volume.

It seems like the best way for the Pacers to become a more efficient offensive team would be to acquire a stretch-four for their starting lineup. However, the key is to not significantly compromise their defense by targeting a player that is limited on that end of the floor. This is something that certainly does not have to be done mid-season, though.

The importance of adding a stretch-four goes beyond simply taking more 3-pointers. The Pacers truly need more floor spacing and it shows most when they try to run high pick-and-rolls against a help defender in the dunk slot because Young is standing there or by simply playing off him when he is spacing from the corner. They rank 28th in efficiency in pick-and-roll ball handling sequences and 25th in roll man efficiency.

Indiana is not typically a hot free agency destination and Oladipo’s knee injury certainly will not help the Pacers' recruiting efforts. Since their supporting cast of veterans is not sufficient, simply re-signing their players will not be enough. That is why using the trade deadline to add to their core could be the best of course of action since their draft position is not going to be strong anyways.

An intriguing trade target for the power forward spot is Aaron Gordon. It was widely reported last summer that the Pacers were preparing to offer him a contract that would pay at least $20 million per season. Instead, he agreed to a team-friendly, four-year, $80 million deal to return to the Magic. The 23-year-old fits both an immediate and long-term timeline and he already has a good relationship with Oladipo.

Gordon is having a strong season for the Magic with averages of 15.8 points, 7.5 rebounds and 3.4 assists. Many are probably familiar with him from his high-flying performance during the dunk contest a few years ago, but he is far more than just a dunker. He is an impactful defender, has shown an improved perimeter playmaking ability, is a reliable catch-and-shoot threat, and has untapped potential as an off-ball threat alongside better talent.

It is unclear what would be required of the Pacers to be able to acquire Gordon in a trade and it may require getting creative and involving a third team. Orlando has seen strong signs in Jonathan Isaac this season and they both play the power forward position. It would make sense to receive value for Gordon now to help further their rebuilding efforts.

It is unlikely that the Pacers will be that active at the deadline. They believe in their team and there is not much point in investing too much into a season when your franchise player is out for the remainder of the games. The moves that the team makes are typically not reported prior to them happening either, so if anything does happen, it will likely be a surprise.