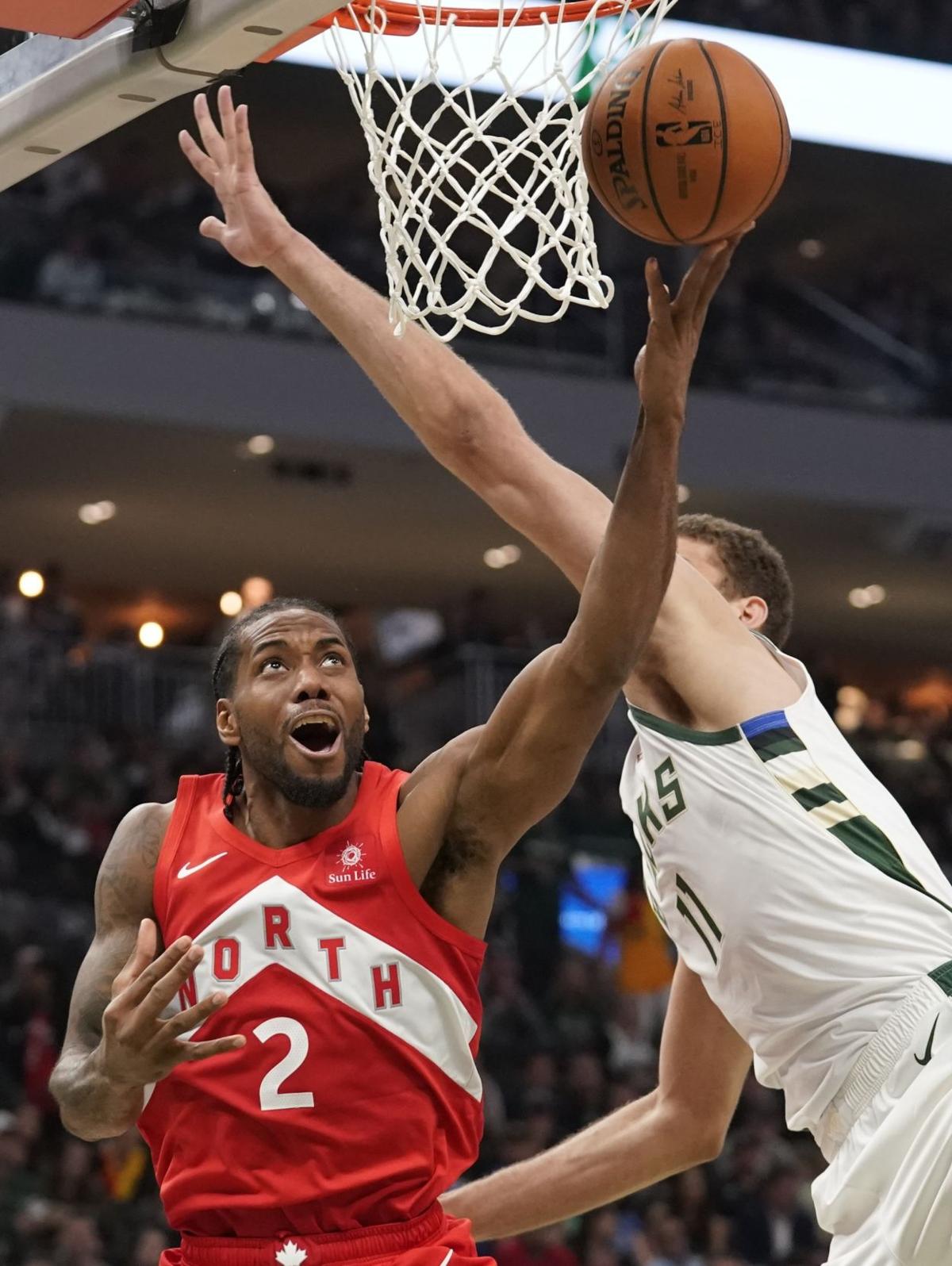 KEY PLAYER: Toronto forward Kawhi Leonard shoots past Milwaukee center Brook Lopez during Game 5 of the Eastern Conference Finals on May 23 in Milwaukee. The Raptors host Golden State in Game 1 of the NBA Finals on Thursday.

KEY PLAYER: Toronto forward Kawhi Leonard shoots past Milwaukee center Brook Lopez during Game 5 of the Eastern Conference Finals on May 23 in Milwaukee. The Raptors host Golden State in Game 1 of the NBA Finals on Thursday.

For the first time in nine years, the NBA Finals will feature a matchup that does not include a team led by LeBron James. The Toronto Raptors will be the latest challenger that will attempt to take down the Golden State Warriors. Game 1 is Thursday night at Toronto.

The matchup could be interesting for a variety of reasons. It starts with the fact that Toronto's Kawhi Leonard is having a historical playoff run. He is averaging 31.2 points, 8.8 rebounds and 3.8 assists per game while shooting 50.7 percent from the field, 38.8 percent on 3-pointers and 87.5 percent on free throws.

"[Kawhi Leonard] is the most like [Michael] Jordan that we've seen," Los Angeles Clippers coach Doc Rivers said during a recent appearance on SportsCenter. "There's a lot of great players. LeBron is phenomenal, [Kevin Durant] is phenomenal. Not that [Leonard] is Jordan or anything like that, but he's the most like him. Big hands, post-game, can finish. Great leaper, great defender, in-between game. If you beat him to the spot, he bumps you off, and then you add his 3-point shooting."

The Raptors’ best chance to winning this series begins with finding success early for a few reasons. It starts with the fact that they have home-court advantage and perhaps just as important is the fact that the Warriors will not have Durant for at least the start of the series. Failing to hold an advantage when the series goes to Golden State would be problematic for Toronto.

Two-time defending champion Golden State has faced some difficult individual assignments during their playoff run such as Damian Lillard and James Harden. The game plans to slowing down Lillard and Harden are unique and that is no exception with how they will try to defend Leonard. Without Durant early on in the series, further modifications to strategy are needed.

"So it can fool you to just say, we can just guard him this way or we can do this or we don't have to put too much focus into him. It doesn't look the same; it's not as pretty. But, boy, is it effective."

The Raptors will not be able to count on Leonard’s heroics being enough to win games given the level of competition. They will need their upper-tier scoring options like Pascal Siakam and Kyle Lowry to be prepared to make plays to combat any defensive strategies that are geared towards neutralizing Leonard’s scoring impact. Golden State will have its work cut out for itself if the Raptors’ supporting cast manages to step up.

Another element to this series to watch is the looming return of the Warriors' DeMarcus Cousins, who suffered a torn left quadriceps muscle in the first round against the Clippers, While it remains unknown when he will return to game action and how many minutes he will receive when he does, his status has been ruled questionable for Game 1. He could play as soon as Game 2.

“DeMarcus has done an amazing job coming back from the injury, which we felt at the time was season-ending,” Warriors coach Steve Kerr told reporters during NBA Finals Media Day. “So he’s done an incredible job of rebounding, rehabbing and now here he is. He’s scrimmaged a couple times this week. He’s pain free, so it’s really more a matter of rhythm and timing and conditioning, all those things.

“If this were the regular season, I’d throw him out there and he’d play whatever minutes he could tolerate and we’d build him up from there. This is not the regular season, it’s the Finals, so we have to figure out what’s the best way to utilize him. How many minutes he can play, what the game feels like, what the matchups are like? So some of that will be determined by what’s happening in the game, and the other stuff is just internal with our staff.”

Any successful effort to defeat the Warriors’ offensive attack led by Curry, Green and Klay Thompson in a seven-game series needs a truly strong defensive impact. Toronto has many units it can deploy that are effective in on-ball defense that can also swarm around wreak havoc making rotations in team defense. Whether that can translate to slowing down a truly transcendent team enough remains to be seen.

The potential return of some seriously talented players — Cousins and Durant — just makes the idea of having to slow down Golden State so daunting for any team. However, Toronto at least has the benefit of a strong defensive option like Marc Gasol to combat Cousins while having Leonard that can check Durant.

Toronto also has the benefit of Leonard and Danny Green having prior experience dealing with a super team during an NBA Finals matchup. Both players faced off against a Miami Heat team that was led by James, Dwyane Wade and Chris Bosh in 2013 and 2014 as members of the San Antonio Spurs. They helped the Spurs win in 2014 and Leonard was Finals MVP.

There is a lot to enjoy about this matchup during the games but there is also a lot potentially riding on the outcome of the series. While Durant could depart from the Warriors regardless of the outcome, it’s difficult to envision Leonard leaving the Raptors in the offseason if his team manages to be the one that hoists the Larry O’Brien trophy — or even if they come close.

The Eastern Conference would be left wide open if Leonard were to depart for a team in the Western Conference. That could result in some aggressive trade strategies from teams to stake their claim as the leader of an open conference.