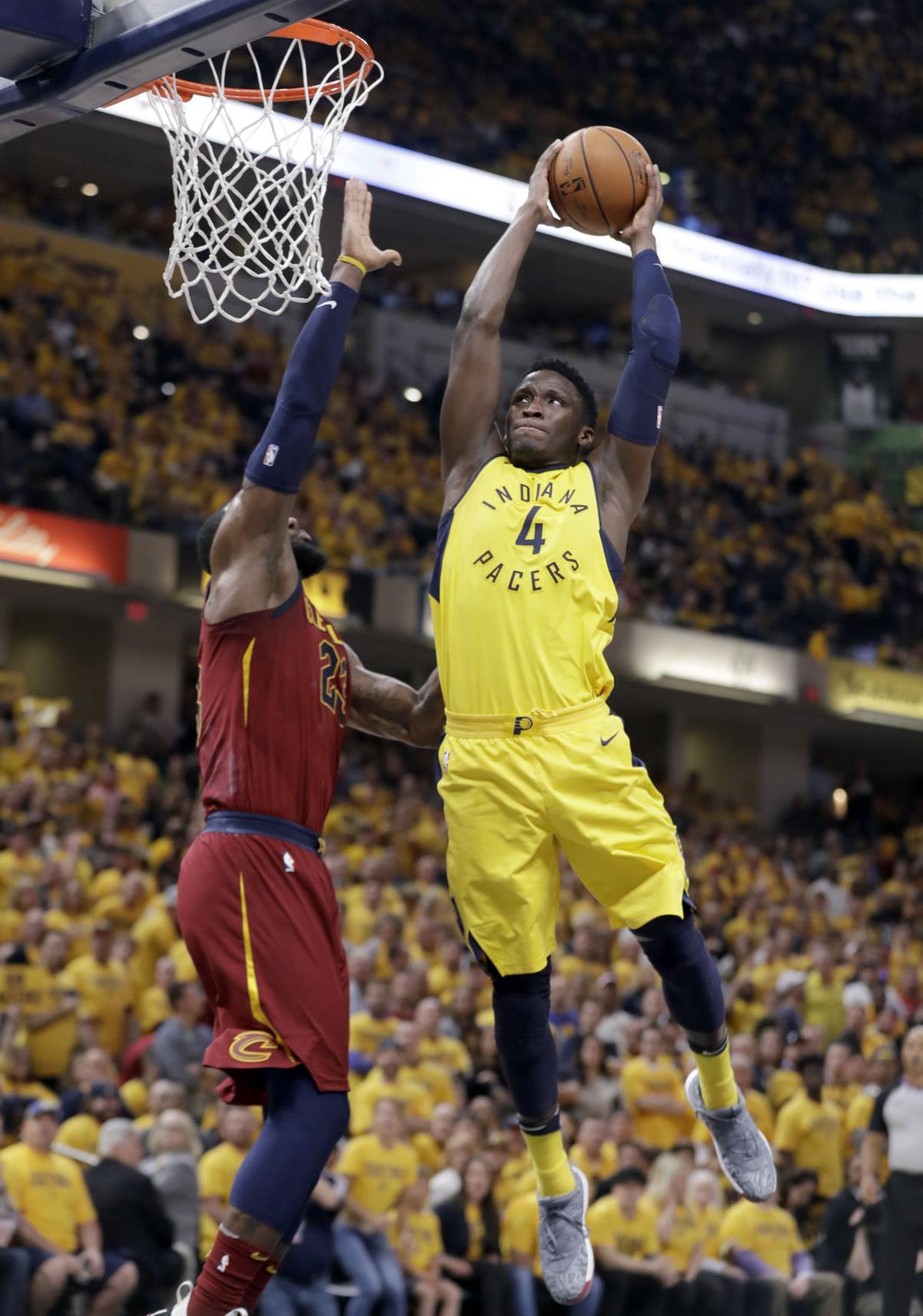 ATTACK MODE: Indiana guard Victor Oladipo soars to the basket past Cleveland forward LeBron James during Game 6 of a first-round playoff series on April 27 in Indianapolis.

ATTACK MODE: Indiana guard Victor Oladipo soars to the basket past Cleveland forward LeBron James during Game 6 of a first-round playoff series on April 27 in Indianapolis.

It was a truly special season for Indiana Pacers star Victor Oladipo and he is starting to rack up accolades because of it. As of now, Oladipo was named to the NBA’s All-Defensive first team and the All-NBA third team and he is the front-runner to win the league’s Most Improved Player of the Year Award, too.

It goes beyond just the end-of-season awards, though. Let’s not forget that Oladipo also earned an All-Star appearance and set a franchise record for most Eastern Conference Player of the Week awards after winning it three times. Most importantly of all, he led the Pacers to an impressive 48-34 record and took LeBron James and the Cleveland Cavaliers to the brink of elimination.

The numbers that Oladipo put up this season are not a common occurrence. He ended the season with averages of 23.1 points, 5.2 rebounds, 4.3 assists, 2.4 steals (led the NBA), 0.8 blocks and 2.9 turnovers. The only other players in Pacers history (including ABA) to average at least 23 points, five rebounds and four assists are Paul George, George McGinnis and Roger Brown.

It’s important to note that Oladipo joined Michael Jordan, Clyde Drexler, Russell Westbrook, Kobe Bryant, Dwyane Wade and Stephen Curry as the only guards in NBA history to average at least 23 points, five rebounds, four assists and two steals in a season. The list cuts down to only Jordan, Wade and Bryant when factoring the guards who also matched his average for blocks, too.

It is clear that Oladipo made his presence felt on a nightly basis but perhaps what solidifies his value is how sorely he was missed whenever he wasn’t on the court. The Pacers had an 0-6 record in games that he did not play and there was a difference of 13.7 between his on and off-court net rating.

Oladipo is rapidly building a base to becoming one of the best players in Pacers history. Not only has his dynamic averages rarely been matched in franchise history, but also, he joined Reggie Miller, Jermaine O’Neal, George and Ron Artest as only players in franchise history to be named to an All-NBA team and is now two away from tying Miller, O’Neal, and George for the record.

This is just the beginning for Oladipo. He is already back working with the same trainers in Miami who helped him transform his body last summer. This could ultimately help him to take even another step forward as a player and that could happen even through being able to better handle the season-long load of being a dynamic star player from a stamina standpoint.

Something that stuck out to me was the fact that he struggled with his perimeter jump shot for a long stretch after his four-game absence in late December. He shot on average 1.6-of-5.4 (30.2 percent) from beyond the arc between the time that he returned in early January up until the month of April.

It’s worth mentioning that Oladipo experienced a gradual decline in his perimeter shooting efficiency leading up to that long rough patch, too. He started off shooting 45.7 percent in November, then 42.9 percent in December, then 40.6 percent in January, and then it dropped all the way down to 30.8 percent in February.

There are a few other ways that improvement can be made this summer by Oladipo that go beyond sustained shooting efficiency. While there is always room for growth as a playmaker in areas like pick-and-roll ball handling and isolation for any player, he would benefit from improving his presence as an off-ball player by becoming better at knocking down shots coming off screens and basket cutting and he can improve at creating shots for his teammates in general.

It will be interesting to see what the Pacers end up doing this off-season because there are a few ways that making chances could benefit Oladipo, especially at the power forward position. Bolstering their supporting group with better spot-up shooting threats would open up the floor far more pick-and-rolls and isolation, which would further optimize their offense as a whole.

The most significant variable currently on the roster is Myles Turner. If he continues to develop his skill-set and the Pacers provide him with more opportunity to serve as a playmaker, it could help diversify Indiana’s offense enough to force the opposition to use more honest principles when trying to slow down Oladipo.

Lastly, it will be interesting to see if the Pacers will look to try and acquire another dynamic perimeter playmaker. As long as it would be a cohesive off-ball player, an acquisition of that kind would make it really hard for opposing teams to justify sending double-teams in Oladipo’s direction. Being able to use Oladipo in a more concentrated playmaking role could help him preserve his stamina over the course of a full season while simplifying his responsibilities.

Oladipo and the Pacers laid a strong foundation for the first year of what was perceived as what was supposed to be a rebuild. The future is bright for both Oladipo and Indiana and what we saw this year was just the beginning of something potentially special.